To stimulate investment and promote production efficiency, the Chinese government has undertaken a series of value-added tax (VAT) reforms. One of those reforms, in 2009, reduced not only the purchasing price of equipment, but also investment frictions, i.e., the price gap imposed by the pre-reform VAT system between new and used equipment. We find that this reform increased equipment investment by 36% and, more importantly, the increase was driven by investment spikes (i.e., investment greater than 20% of capital stock). Using a dynamic investment model, we find that tax policies that directly reduce investment frictions, such as investment tax credits, are more effective in stimulating investment than policies such as corporate income tax cuts or bonus depreciation.

China has undertaken a series of value-added tax (VAT) reforms since 2004. The reforms began in the manufacturing sector and gradually expanded to the whole economy. These reforms aimed to improve economic efficiency and stimulate investment. In fact, the past decade has witnessed strong investment growth in China. As Figure 1 shows, total investment grew to more than double that in the US or the EU by 2016. VAT reforms, particularly in manufacturing, significantly increased investment in equipment (e.g., Cai and Harrison 2018; Liu and Mao 2019).

Figure 1 Comparison of Investment in China, US, and EU 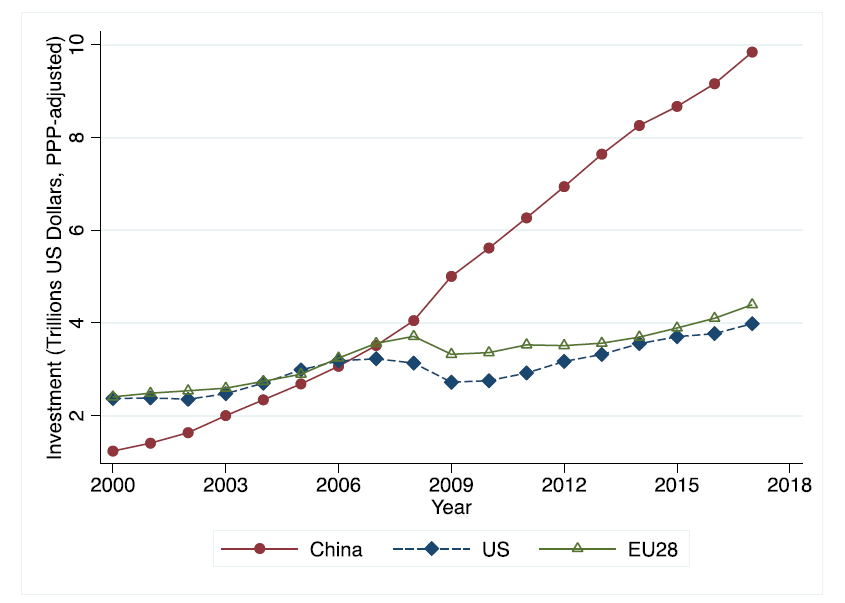 While previous research focused on how VAT reforms change the price of capital, we revisit this approach in a recent paper (Chen et al. 2019). In this paper, we address the fact that investment is lumpy in most microdata. The fact that many firms do not invest in a given year and often invest in bulk shows the importance of frictions, particularly fixed cost and price difference between purchase and resale prices, for investment decisions.

Using corporate tax data and a difference-in-difference research strategy, we find that firms affected by the 2009 VAT reform increased investment by 36%, relative to firms that were not affected by the reform. More strikingly, this increase was primarily driven by extensive margin responses of firms that jump from not investing at all to replacing more than 20% of their current capital.

We then study how firms respond to tax incentives using a dynamic investment model that captures the Chinese tax setting. This model shows that policies that directly reduce investment frictions are more effective at stimulating investment than policies that only reduce the cost of investment. This lesson from China’s 2009 VAT reform is applicable to the administration of the VAT system in other countries, and to countries with other related fiscal policies, such as input taxes and investment tax credits.

China relied on a production-based VAT system prior to 2004. While firms were allowed to deduct input taxes on materials, they could not receive credits for equipment or other fixed assets. Given the 17% primary VAT rate, a firm purchasing 1000 RMB of equipment would pay 1170 RMB in total. On the other hand, when a firm sold used equipment, which was purchased at the VAT-included price, the firm was unable to recover the additional VAT. This practice created a gap between the price of new and used equipment, which is known as “partial irreversibility” (e.g., Cooper and Haltiwanger 2006). Partial irreversibility affects investment decisions. In particular, unless firms receive sufficiently high or sufficiently low productivity shocks, they may prefer not to adjust their capital level. Consistent with this friction, our data shows that almost half of firms do not invest in a given year.

The Chinese government launched a series of pilot programs to allow firms to deduct input VAT on equipment. While these programs started in 2004 in Northeast China (e.g., Cai and Harrison 2018), the reform was unexpectedly extended to the whole country in response to the 2008 financial crisis. This policy shock created distinct consequences for two groups of firms: domestic (Chinese) firms and foreign (non-Chinese) firms because foreign firms had been allowed to deduct input VAT on equipment even before the reform. Therefore, while the 2009 VAT reform did not affect investment in foreign firms, it substantially reduced investment costs for domestic firms. We exploit this natural experiment by using foreign firms as the control group and domestic firms as the treatment group in our empirical analysis.

Figure 3 Decomposing the Effects to Spike and Non-Spike Investment

Through the lens of the model, we evaluate how much investment could be stimulated for a given tax expenditure using different incentives. Figure 4 compares the results of different policy simulations over a 10-year window by plotting the increase in investment in the Y-axis and the fiscal policy cost in the X-axis. For instance, the model suggests that lowering the effect of the VAT rate on equipment from 17% to 9% leads to a 15% investment increase, at the expense of a 12% tax revenue loss. The revenue loss is small because part of the VAT revenue loss is offset by an increase in corporate income tax (CIT) revenue. The figure also indicates that reducing the CIT rate from 15.4% to 13% leads to a similar tax revenue loss. The corresponding investment response, however, is less than 5%—around one-third of investment increase from the VAT stimulus. Indeed, the blue line for CIT cuts lies below the red line for the VAT, indicating the latter is more effective at stimulating investment at any given tax expenditure. Because the VAT reform increased the probability of firms investing by narrowing the price gap between new and used capital, this was a more effective reform than a potential CIT cut. We also find that other tax policies that reduce partial irreversibility—such as an investment tax credit—are similarly cost-effective. 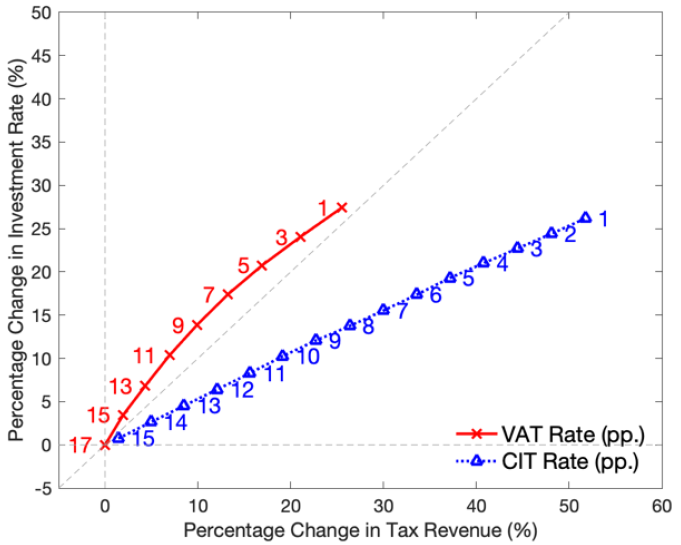