China’s household savings rate has been persistently high since the early 1980s despite rapid economic growth and contrary to the predictions of the standard consumption theory. Since China has undergone large structural changes in its transition to a market economy, precautionary savings seem to be a plausible contributing factor to the high savings rate. We use China’s large-scale reform of State-owned Enterprises (SOEs) in the late 1990s as a natural experiment to identify exogenous changes in income uncertainty. We estimate that precautionary savings account for about 40 percent of SOE households’ wealth accumulation from 1995 to 2002.

The Chinese household savings rate has been relatively high compared to the other Asian economies. Figure 1 shows that the Chinese household savings rate rose from 30 percent in 1992 to 42 percent in 2010, before declining gradually to about 37 percent in 2015. During the same period, households in other Asian economies such as South Korea and Japan saved at a much lower rate than those in China. China’s high and rising savings rate is puzzling when viewed from the lens of the standard consumption saving theory, which predicts that steady increases in permanent income should raise consumption and reduce savings. 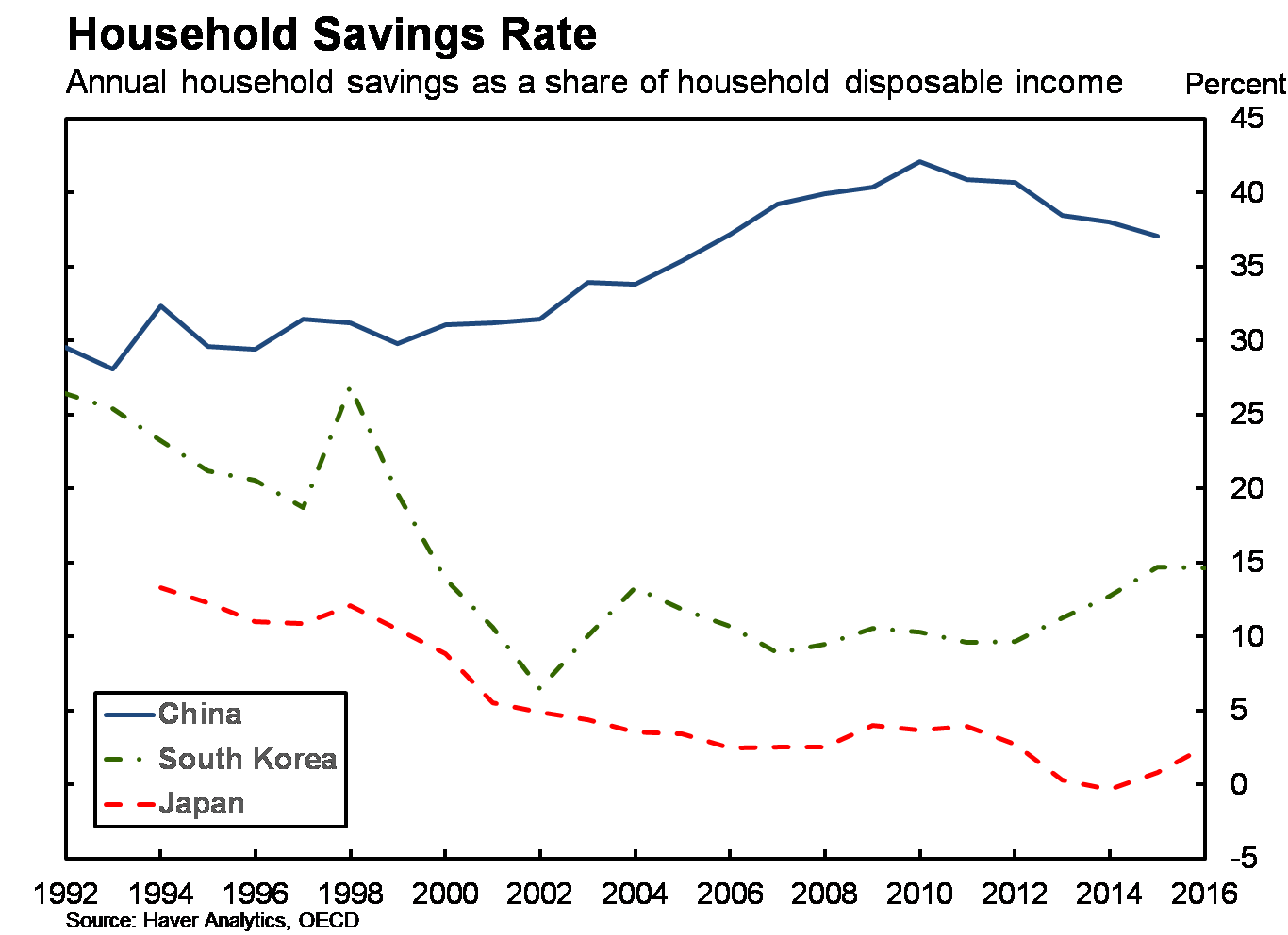 The high savings rate in China also has far-reaching policy implications. The high savings rate reflects financial repression and the lack of a social safety net and, therefore, Chinese policymakers should pursue structural reforms that facilitate more consumption and risk-sharing. If domestic savings exceed investment, then persistent excess savings in China contribute to the country’s persistent current account surplus and global imbalances. Thus, an understanding of the driving factors behind China’s high savings rate is important not just for designing appropriate reform policies in China, but also for international policy coordination.

In a recently published article in the Journal of Monetary Economics, we present evidence that precautionary savings in response to large structural changes in China have contributed significantly to Chinese household savings (see He, Huang, Liu, and Zhu, 2018). We estimate the magnitude of precautionary savings using the large-scale SOE reform in the late 1990s as a natural experiment to identify exogenous variations in income uncertainty. We find that precautionary savings account for about 40 percent of total wealth accumulation by urban SOE households over the period of 1995 to 2002.

China’s economy was under a central-planning regime until the late 1970s. The government at that time maintained tight controls over production and factor allocations. Most firms were state-owned or state-controlled and most jobs were government-assigned. Workers received subsistence wages and, in exchange, the government promised them guaranteed lifetime employment and near-free housing, education, health care, and retirement benefits. The Chinese government advocated this cradle-to-grave regime, known as the “iron rice bowl,” as an advantage of its socialist system. Under this system, SOE workers enjoyed the same job security and similar benefits as government (GOV) employees and they all benefited from the iron rice bowl.

Starting in the early 1980s, a wide range of liberalization policies led to booms in private-sector activity and raised competition for SOE firms. By the mid-1990s, many SOEs (especially small- and medium-sized SOEs) were operating at a loss because they could not lay-off excess workers under the iron rice bowl regime. The 1997 Asian Financial Crisis exacerbated the SOE’s losses. To improve SOE efficiency, the Chinese government announced the large-scale restructuring of SOE firms at the Fifteenth Communist Party Congress in September 1997. A central spirit of the reform policy was to “grasp the large and let go of the small.” Large (and usually profitable) SOEs in strategically-important sectors such as electricity, oil, raw materials, and telecommunications were corporatized and maintained under state controls, while smaller (and often loss-making) SOEs were privatized or deemed bankrupt (see Hsieh and Song, 2015).

The SOE reform led to massive layoffs (xia gang in Chinese). According to the China Labor Statistical Yearbook, a cumulative of over 27 million SOE workers were laid off from 1997 to 2002, equivalent to about 27 percent of total SOE employment in 1997. However, GOV employees were rarely affected by the reform and they were able to keep their iron rice bowl (see Liu, 2014, for a more detailed discussion of the SOE reform and the massive lay-offs). According to the Chinese Household Income Project (CHIP) survey — the dataset that we use for this study — 58 percent of the individuals who were laid off prior to 2002 worked in SOEs, whereas only 2.3 percent of those individuals worked for the government. (The remaining 39.7 percent worked in the private sector.)

The similarity between an SOE job and a GOV job before the reform and the asymmetric impact of the reform on SOE workers allow us to identify exogenous changes in income and employment uncertainty, which are crucial for estimating precautionary savings.

We use data from the CHIP survey to estimate precautionary savings. The survey includes data on employment, education, income, expenditures, wealth, and other demographic information for a nationally-representative sample of roughly 20,000 households in 1988, 1995, 2002, and 2007. We focus on urban households in the SOE and government sectors and restrict our sample to prime-age workers between 25 and 55 years of age. We concentrate on the 1995 and 2002 surveys as these surveys report household wealth data that are essential for our estimation of precautionary savings (the surveys in 1998 and 2007 do not report wealth information).

It is challenging to estimate precautionary savings. One difficulty is to identify large and exogenous variations in income uncertainty (Carroll and Kimball, 2008; Lusardi, 1998). The literature typically uses the cross-sectional variances of income as a proxy for income uncertainty; e.g., Carroll and Samwick, 1998. However, such proxies suffer from measurement errors and endogeneity biases.

A second difficulty is to isolate a self-selection bias related to job choices. Precautionary savings depend not just on risk, but also on risk preferences (Caballero, 1991). Risk preferences affect not just saving behaviors, but also job choices. While a more risk averse individual saves more for given income risks, she is also likely to choose a job with lower income risks. The correlations between risk preferences and job choices implies a self-selection bias that leads to underestimated precautionary savings (Fuchs-Schundeln and Schundeln, 2005).

Partly reflecting these difficulties, the existing literature has reported mixed evidence of precautionary savings. Some studies find weak or no evidence (e.g., Dynan, 1993), while some other studies attribute a large fraction (50 percent or more) of wealth accumulation to precautionary savings (e.g., Carroll and Samwick, 1998; Gourinchas and Parker, 2002).

Our empirical approach addresses these difficulties in estimating precautionary savings. To identify variations in income uncertainty, we use the large-scale SOE reform in the late 1990s as a natural experiment, which we argue is exogenous to individuals. The massive SOE layoffs had a large impact on the relative job security for SOE workers, but not on GOV employees. The CHIP survey data in 1995 and 2002 cover both the pre- and post-reform periods, allowing us to apply a difference-in-differences (DID) approach. The time variation of the relative savings of workers across the two sectors capture the magnitude of precautionary savings caused by the SOE reform. To mitigate the self-selection bias, we restrict our sample to those households with government-assigned jobs, following the lead of Fuchs-Schundeln and Schundeln (2005). For individuals with government-assigned jobs, their risk preferences are unlikely to be correlated with their job choices.

Our empirical model builds on the standard model of precautionary savings (e.g., Lusardi, 1998), which postulates that a household’s savings rate is a function of its permanent income and income risks conditional on being employed, as well as a set of demographic controls such as age, education, and occupation. Different from the standard model, our model also includes an additional independent variable that indicates whether the household head is an SOE worker. This SOE indicator (or dummy) captures the unemployment risks for SOE workers relative to GOV employees. If the hypothesis of precautionary savings is correct, then we should observe that the SOE reform leads to larger increases in savings for SOE workers than for GOV workers since the former faces greater job uncertainty.

Our results support the precautionary savings hypothesis. Controlling for other factors, working in the SOE sector or the GOV sector made no difference for the wealth/income ratio in 1995 before the reform began. However, after the reform, the difference in savings behavior between SOE workers and government workers becomes statistically and economically significant (see Figure 2). We estimate that, in 2002, the wealth/income ratio of SOE workers is notably higher than that of government workers. The extra savings of SOE workers relative to GOV workers after the reform are equivalent to about seven months worth of permanent income. Our estimation suggests that precautionary savings account for about 40 percent of the overall increase in financial wealth held by urban SOE households between 1995 and 2002. Furthermore, consistent with the theory, our estimation also reveals that the demographic groups more vulnerable to the SOE reform have a stronger precautionary savings motive.


Figure 2: Wealth Holdings of Households Working in Different Sectors Before and After the SOE Reform. 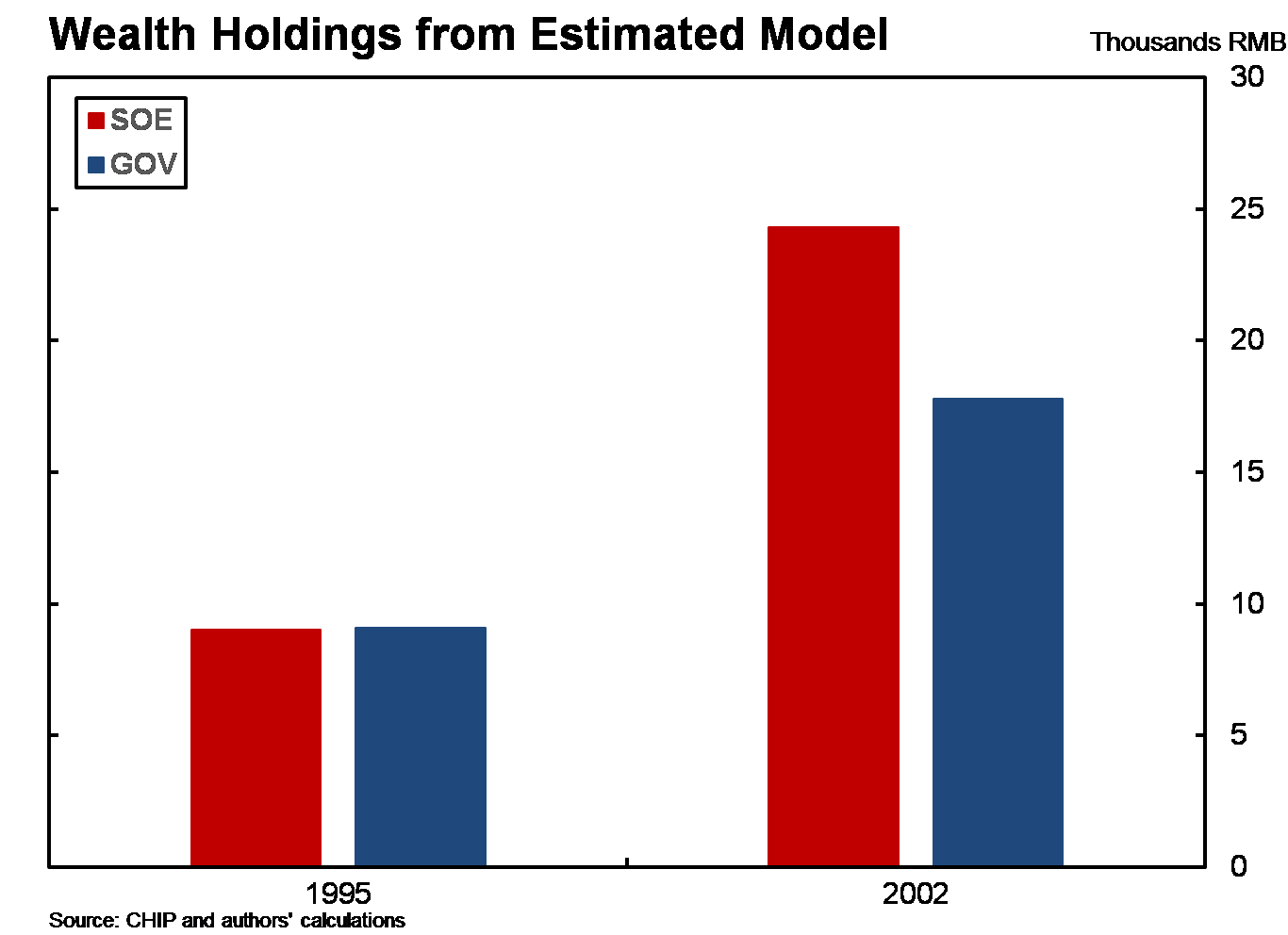 We estimate the importance of precautionary savings using China’s large-scale SOE reform in the late 1990s as a natural experiment to identify exogenous variations in income uncertainty. Our estimation suggests that the increased precautionary savings following the SOE reform contributed to about 40 percent of the total increase in financial wealth held by urban SOE households from 1995 to 2002.