Dr. Qing Ba from Hong Kong Exchanges and Professor Frank M. Song from the University of Hong Kong discuss the role of offshore debt issuance in the improvement of Chinese issuers’ creditability and transparency. China has the third largest bond market in the world. However, the absence of an accurate local rating and pricing system deepen the risks in domestic debt sectors. Our recent research finds that after Chinese corporates issue bonds in the offshore market, thus binding themselves to stricter market discipline and information disclosure requirements, the rating and disclosed information from offshore issuance may be of a greater reference value in the assessment of Chinese corporates’ credibility. This in turn leads to a signaling effect on their subsequent domestic debt financing. In addition to providing cheap funding, offshore debt issuance could bring about improvements in the creditability and transparency of Chinese issuers. This is of critical importance in pricing China’s credit risk and enhancing the soundness of China’s bond market.


Over the past decade, China has made significant strides in developing the domestic bond market, making it the third largest such market in the world at RMB 56.3 trillion, or about $8.1 trillion USD at the end of 2016 (see Figure 1). Despite this significant growth, the domestic bond market remains underdeveloped in terms of creditability and opacity compared to its more mature international peers. 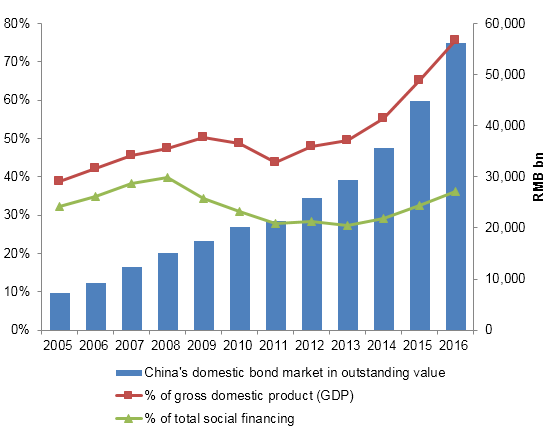 One of the critical issues facing China’s bond market is that nearly 80 percent of domestic issues are given an AA or above grading by local rating agencies, making it difficult to identify the true credit differentials of Chinese corporate issuers (see Figure 2). A reason why the ratings are heavily concentrated in the upper-end is the dominance of government-related issuers in China’s bond market. Although China’s bond market has diversified by introducing various type of private issuers in recent years, the treasury bonds, municipal bonds, and policy-bank bonds in aggregate still represents 79 percent of the market in outstanding value (Source: CCDC website, as of late 2016). In a relative smaller corporate bond segment, the state-owned enterprises (SOEs) and local government funding vehicles (LGFVs) also bulk the market, thus crowding out private companies and leading to the unhealthy growth of shadow banking in China. Owing to an implied government guarantee for the state-related issuers, the local rating agencies generally view this type of issuers as having minimal credit risk, despite some of them having a weak financial performance and substandard information disclosure.

The credit issue is further complicated by the absence of a default history and clear guidance regarding investor protection in a bankruptcy proceeding. China had not experienced a true corporate bond default until March 2014, when the wholly state-owned Baoding Tianwei Group Company missed an interest payment on its RMB 1.5 billion medium-term note. A notable rise in debt defaults up to RMB 39.3 billion was recorded in 2016 (see Figure 3). There were 109 defaults with a total face value of RMB 53 billion from 2014 to 2016, 23 percent of which were issued by SOEs (at both the central and provincial level) and nearly 40 percent of issuers had been granted an AA or above rating at the issuance (Source: Wind database). The absence of clear rules or guidance in the default settlement leads to an uncertain and costly process for investors.

Against this backdrop, a clear credit profile of Chinese issuers with enough information disclosure is of critical importance in pricing China’s credit risk and enhancing the soundness of China’s bond market. From this perspective, the evaluation overseas may be of a greater reference value in the assessment of the creditability of Chinese corporate debts and may influence the financing conditions in China’s domestic market. 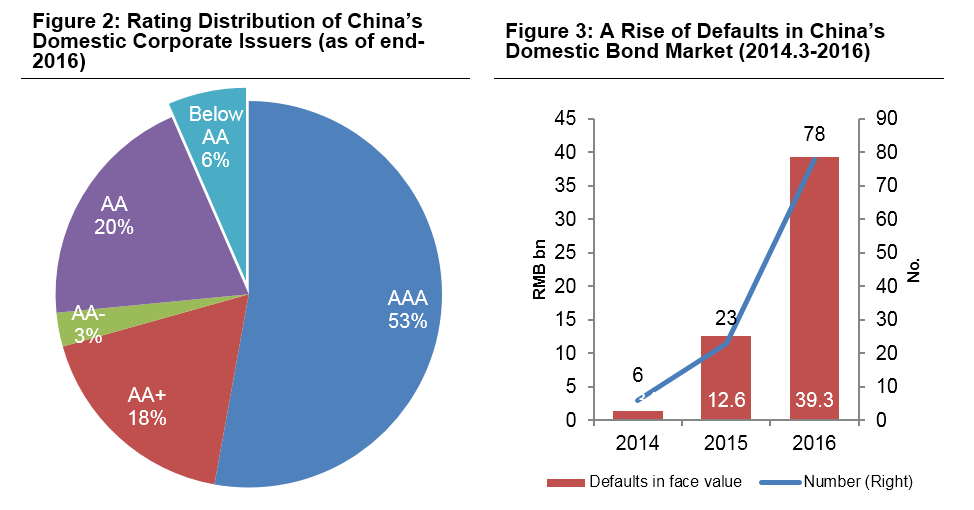 
The Rise of Offshore Debt Issuance by Chinese Issuers

Alongside the rapid expansion of the domestic bond market in China, offshore debt issuance has also seen a similar significant growth in recent years. To support China’s “going overseas” policy, more corporates began to tap into offshore markets to obtain long-term funding. As a result, offshore bond issuances by Chinese issuers have risen sharply from almost nonexistent to $458 billion USD as of late 2015 [Source: Selected samples from Ba, Song, and Zhou (2017)].

Compared with the domestic market, offshore debt issuance requires, in general, more information disclosure and an international rating to align with the stringent regulatory regime in the offshore market (Gozzi, et al., 2008). In fact, a number of Chinese issuers have encountered a noticeable drop in the credit rating of their offshore financing (see Table 1). This is due to the fact that international ratings tend to exclude the credit support from parent entities or a government guarantee and look more at the stand-alone credit strength of issuers. In addition, more restrictive investor protection terms under the U.S. investment-grade covenant structure are employed in China’s offshore bond issuance as a response to the requirements of international investors seeking greater protection for their exposure to Chinese bond assets.

The Signaling Effect of Offshore Issuance

In this spirit, offshore debt issuance has induced, besides cheap funding, extra (and even more important) changes to Chinese issuers, particularly in improvements in creditability and transparency. This kind of positive influence stemming from offshore financing has been extensively examined in the literature, often referred to as the “bonding” hypothesis in cross-listing studies (Coffee Jr., 1998; Licht, 2003). Researchers argue that cross-listing under a relative stringent jurisdiction in offshore markets bonds the issuer to stricter market discipline and information disclosure requirements. Therefore, the improved creditability and transparency of issuers, which may not be fully unveiled in the local market, signal to both international and local investors, helping them to screen the qualified debtors and adjust the debtor’s financing conditions afterwards.

Our recent research (Ba, Song, and Zhou, 2017) sheds additional light on the signaling effect of offshore debt issuance on China’s domestic bond market with a special dataset covering the bond issuance both in onshore and offshore markets by Chinese corporate issuers. To track the change of domestic funding terms before and after offshore financing, we match the issuing history of every cross-border financing group, both onshore and offshore. The results confirm that the offshore debt financing of Chinese issuers lowers funding costs in their subsequent domestic issuance, especially for financially-constrained companies, thus demonstrating a signaling effect of offshore financing in subsequent domestic issuance.


Table 2: The Distribution of Raising Types and International Ratings in Chinese Offshore Issuance

Finally, the paper presents another interesting disparity across global financing centers. To date, offshore bonds issued by Chinese firms are scattered all over the world, although they are primarily traded in Hong Kong partially traded in the United States and Singapore. Given the countries’ different requirements for information disclosure and investor protection, offshore issuance taking place under different jurisdictions may show a different degree of signaling effect (Chung, 2015). Offshore bonds issued with a registration domain in Hong Kong, under the jurisdiction of Hong Kong law, or listed in Hong Kong have a stronger signaling effect on the maturity and yield in the subsequent domestic issuance than do other locations.

This finding seems inconsistent with traditional literature, which tends to assume that the United States has a stricter jurisdiction with better protection for minority shareholders and therefore offshore issuing in the U.S. should send a clearer signaling effect than centers located in other countries. A possible explanation is that, given close cultural- and industrial-linkage between Hong Kong and China, analysts, investment bankers, auditors, and other market participants in Hong Kong have better access to information concerning China’s issuers and therefore can more clearly identify their credit risk.

China has launched a wide range of policies to allow its firms to raise funds internationally, as a critical step in liberalizing its capital accounts. Recently, large-scale lending in serving China’s “One Belt, One Road” strategy has also opened wider access to offshore markets to obtain cheap funding and international visibility. However, there has been no systematic analysis of the role of the offshore bond market in promoting China’s financial openness and the development of its domestic market. If offshore bonding sends out signals about the credit information to the domestic market, inducing the important institutional improvement in Chinese issuers’ creditability, the contribution of the offshore market is far more robust than merely serving as a funding source for Chinese firms. Given its special cultural factors and close geographic distance from China, Hong Kong has stronger capability in price discovering of Chinese companies and enhancing the development of the onshore bond market in China.

Disclaimer: The views presented in the paper are those of the authors and do not represent those of Hong Kong Exchanges and Clearing.