The sharp appreciation of the U.S. dollar between mid-2014 and mid-2015 raised concerns in the U.S. and its major trading partners. Zheng Liu, Mark Spiegel, and Andrew Tai from the San Francisco Fed evaluate the impact of dollar appreciation on economic conditions in the United States and its three major Asian trading partners: South Korea, Japan, and China.

The onset of U.S. monetary policy normalization has led to significant appreciation of the dollar. Between mid-2014 and mid-2015, the real effective exchange rate of the dollar increased by about 10%.

In theory, dollar appreciation reduces the relative price of foreign goods sold in the U.S. market and therefore stimulates foreign exports to the United States (Mendoza 1995). Appreciation also can act as a drag on U.S. economic activity, however, as U.S. exports become more expensive in foreign currencies. All else equal, the decline in U.S. activity reduces U.S. household income and lowers overall U.S. demand for foreign goods. If this demand spillover effect is sufficiently large, it may lower (rather than raise) a foreign country's exports to the U.S., limiting that country’s overall economic activity.

U.S. monetary policymakers have frequently emphasized the demand spillover effect in their assessments of the global implications of U.S. monetary policy, both during the global financial crisis and in the subsequent recovery period. For example, in a 2012 speech, Federal Reserve Chairman Ben Bernanke recognized the possibility that U.S. monetary policy easing may have undesirable consequences for its trading partners, particularly for emerging market economies (EMEs) that are vulnerable to abrupt changes in the pace of international capital flows. He stressed, however, that there are potential benefits for EMEs from supporting recovery in the advanced economies (Bernanke 2012). More recently, current Federal Reserve Vice Chair Stanley Fischer noted that, while the onset of policy tightening in the United States may have put pressure on capital movements for some EMEs, one reason for optimism was that this tightening was taking place “against the backdrop of a strengthening U.S. economy and in an environment of improved household and business confidence” (Fischer 2014).

Ambiguity in the effects of dollar appreciation may also stem from the well-known Harberger-Laursen-Metzler effect, which suggests that if a foreign currency depreciates against the dollar, the relative price of its exported goods falls and its terms of trade deteriorate. If this deterioration were transitory, then domestic households would reduce savings to smooth consumption, lowering the country’s current account balance (Svensson and Razin 1983). But if the deterioration in the terms of trade were perceived to be permanent, Obstfeld (1982) shows that the negative wealth effect may increase domestic savings, improving the current account balance.

In a recent paper, we evaluate the impact of dollar appreciation on economic conditions in the United States and its three major Asian trading partners: South Korea, Japan, and China (Liu, Spiegel, and Tai 2017). This is a challenging task, not only because of the theoretical ambiguity of the dollar appreciation effects on foreign economies, but also because measuring economic activity in these Asian economies is inherently difficult.

To examine the impact of dollar appreciation on the three Asian economies, we use the factor-augmented vector auto-regression (FAVAR) framework introduced by Bernanke and Boivin (2003) and Bernanke, Boivin and Elias (2005) to gauge the impact of monetary policy shocks for the U.S. economy. This approach addresses the issue that observed individual data sources, such as industrial production and the unemployment rate, are generally imperfect measures of economic activity. This concern is particularly relevant for a country like China, where data availability is limited and official data are not completely reliable (Fernald, Spiegel, and Swanson 2014). The FAVAR framework summarizes economic activity through a small number of estimated indices.

We extend the FAVAR framework to study the impact of dollar appreciation on four countries: South Korea, Japan, China, and the United States. For each country, we construct a local conditions index (LCI) that summarizes changes in a number of domestic economic indicators, such as industrial production, unemployment, housing activity, and asset market indicators. To control for changes in external economic conditions for a specific country, we also construct a latent index of foreign activity, which summarizes the economic activity in which the country engages with its nine largest trading partners (weighted by trade shares). This country-specific global conditions index (GCI) provides a novel way of conditioning for changes in relevant foreign activity and helps isolate the dollar appreciation effects in the estimated FAVAR framework. Both the LCI and GCI are plausible, as they sufficiently capture the four countries’ domestic business cycles as well as global cyclical fluctuations (see Figure 1). 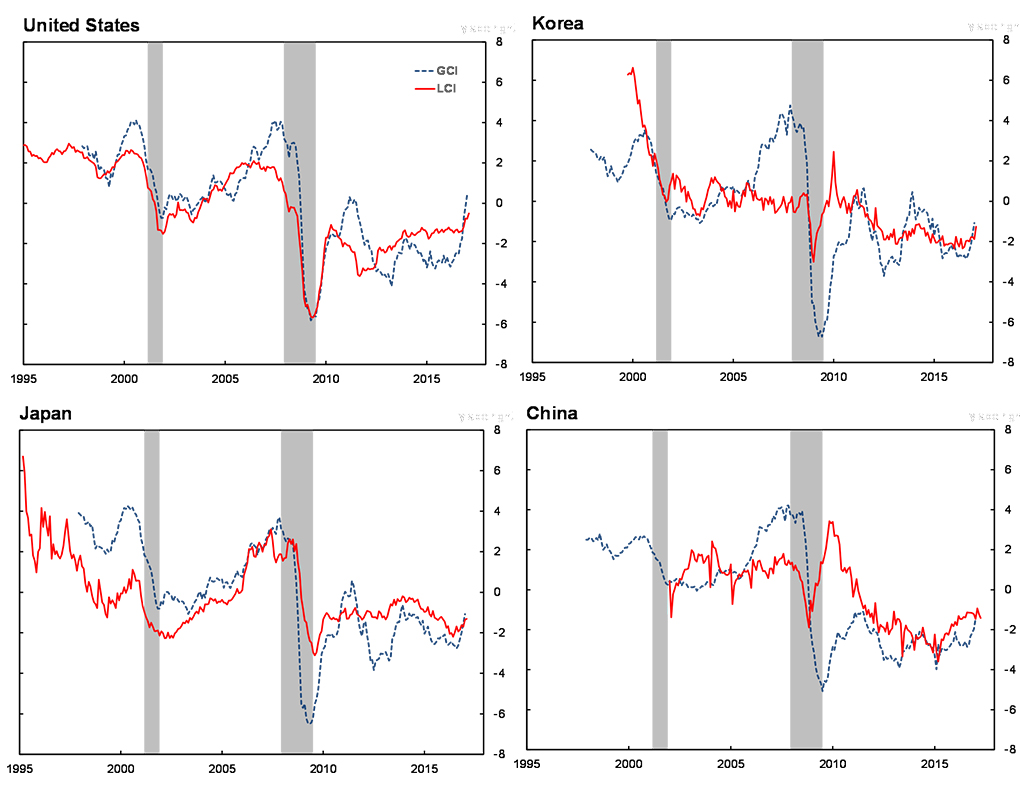 We then estimate a vector auto-regression model for each country. Figure 2 shows the estimated impulse responses of the LCI and inflation in each country following a one standard deviation positive shock to the broad U.S. dollar index. The solid lines represent the median impulse responses and the dashed lines show the range of the 68% confidence bands.

Figure 2: Impulse responses of the local conditions index and inflation for each country 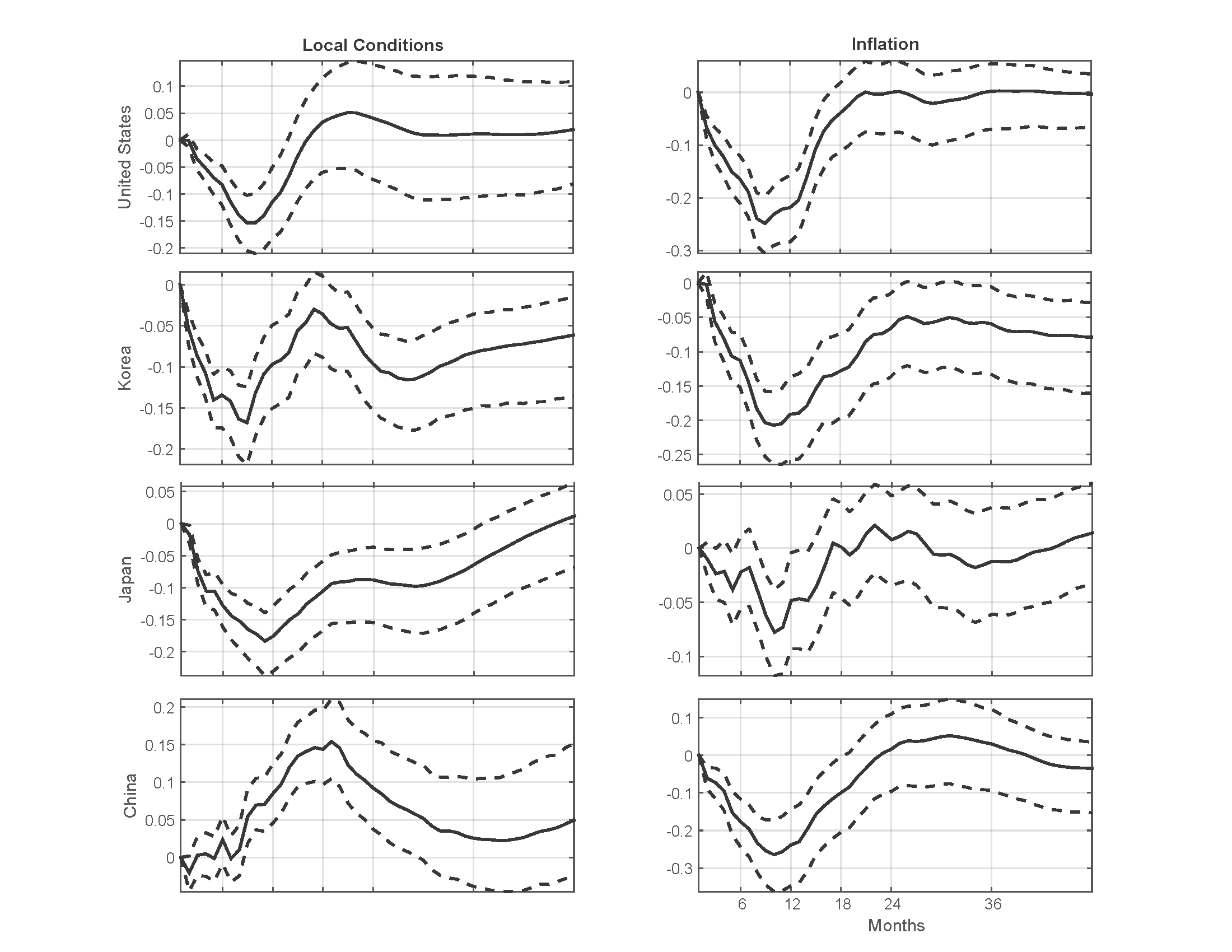 The results confirm that an appreciation in the dollar results in reduced economic activity and inflation in the United States. It is also associated with a decline in both local activity and inflation for the three Asian countries, although the impact on Chinese activity is more muted and statistically insignificant. This result suggests that the adverse impacts on U.S. demand from dollar appreciation dominate the positive expenditure-switching terms of trade effects for these countries. These results are robust, withstanding variations in both the measurement of local and external economic activity and model specification.


Figure 3: Actual and counterfactual paths of the local conditions indices 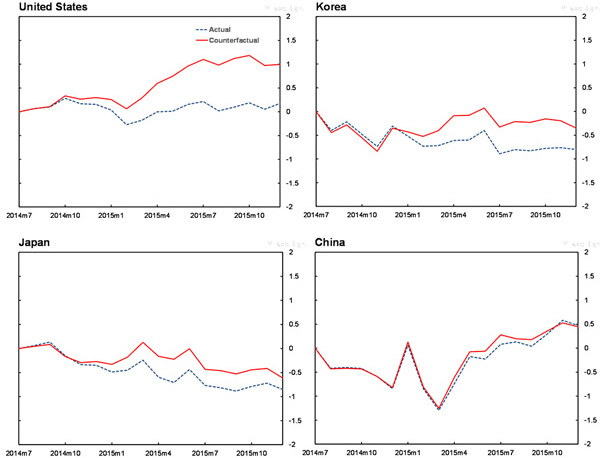 Note: Both the actual and counterfactual LCIs are normalized to zero in July 2014.

These findings suggest that Asian economic conditions are closely tied to U.S. monetary policy, despite the apparent differences in economic structures and policy regimes in those countries. The evidence favors the argument made by U.S. monetary policymakers that the recovery of the advanced economies was in the best interests of EMEs during the crisis period.