In sharp contrast with the market-and-disclosure based system in the US, IPOs in China are subject to strict regulatory rationing and control. We investigate the pricing implications of China’s IPO regulations for its publicly listed companies. We find that these regulations will give rise to significant market frictions with economic consequences for the prices, returns, and even investment decisions of China’s publicly listed companies.

Unlike the registration-based systems in most countries, China’s IPO process is subject to strict regulatory rationing and control. The China Securities Regulatory Commission (CSRC), a functional ministry of the central government, decides which, and how many, companies can obtain public funding through an IPO listing. The process can be arduous and, as prior studies suggest, the outcome may not be determined solely based on economic merit.

Our study, “Reverse Mergers, Shell Value, and Regulation Risk in Chinese Equity Markets,” uses the price paid for shell companies in reverse merger (RM) transactions to examine the effect of China’s IPO regulations. As an alternative to an IPO, a firm can secure a public listing through a “reverse merger,” whereby it essentially takes over a dormant “shell company.” The typical shell company is publicly listed, but has little or no value as an on-going operational entity. Because the prices paid for shell firms reflect the marginal benefit/cost to the firms engaged in each RM transaction, they provide a “shadow price” for the economic cost of gaining access to China’s public equity market.


Figure 1: Number of IPOs and RMs over time 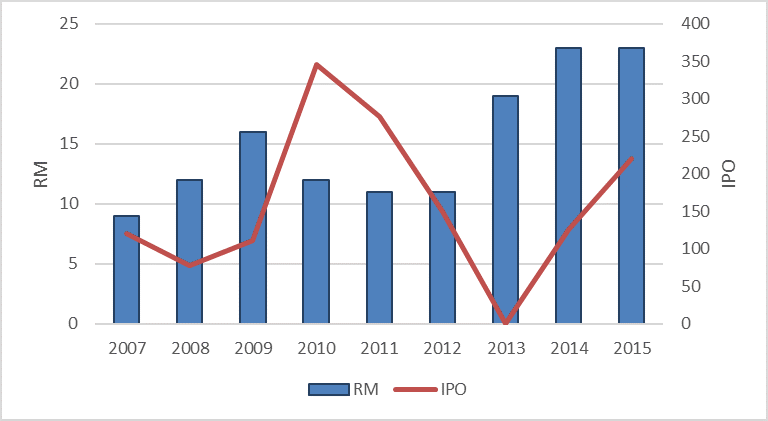 We compute three different shell values estimates (SV1, SV2, and SV3) representing three alternative estimation procedures. These three procedures use identical SFS and OC estimates and only differ their estimate of the market value of the combined entity (MVCE). For SV1, we estimate MVCE by applying the average P/E ratio of the self-identified peers in the RM proposal to the year t earnings of the unlisted firm. For SV2, we apply the average P/E ratio of firms in the same industry to the year t earnings of the unlisted firm. The advantage of these two methods is that they allow us to estimate MVCE without appealing to the market response itself. For SV3, we define the MVCE as the total market capitalization of the listed firm immediately after the RM is made public. Because the typical RM announcement is followed by a period of upward price drift (see Online Appendix), this method likely underestimates the MVCE, causing SV3 to understate the true price paid for the shell.

Figure 2 depicts the average shell value paid for the RM transactions occurring in each quarter between 2007q1 and 2016q1. This figure shows that during our sample period, unlisted firms paid an average of between 2.9 to 4.4 Billion RMB (or more than $400 Million USD) for each listed shell. In general, estimates based on SV1 are highest, followed by SV2 and SV3, respectively. However, regardless of the estimation method, the relative magnitude these numbers dwarf the price paid for a shell company in more developed financial markets (for example, Lee, Li, and Zhang, 2014 report average shell values of around $100,000 USD in RMs consummated in the United States).


Figure 3: Shell value scaled by the median market value of equity across all listed firms on the SHSE and SZSE at the time of each RM transaction

The question of what types of firms tend to choose the RM route rather than the IPO route to access public equity markets is of clear interest. In more detailed analyses, reported in our Online Appendix, we find that the private firms engaged in a RM (i.e., the shell acquirers) are generally robust entities with strong earnings and solid growth trajectories. Controlling for industry and size, firms listing through RMs are similar on most dimensions to their IPO counterparts. However, in contrast to the relatively poor aftermarket performance of IPO firms (including Chinese IPOs), the combined entity in a Chinese RM continues to do well after the RM event. These results suggest that Chinese firms electing to list through an RM are generally healthy businesses that pay a high cost to secure public listing.

The existence of such large shell values has direct implications for the returns and prices of China’s publicly listed companies. To document these effects, we construct a measure of expected shell value to market (ESVM) for each firm, defined as its expected shell value divided by its total market capitalization. An expected shell value for each firm is computed based on a set ex ante firm characteristics, regardless of whether they end up being acquired as a shell. These regressions show that the probability of becoming a shell target is higher for small firms with low profitability, more years of consecutive losses, and less concentrated ownership among the top ten shareholders. To ensure ESVM is truly ex ante, we use rolling Logit regressions where all the independent variables are available prior to portfolio formation. In investment parlance, the ESVM-based portfolio is a tradeable strategy.

Our results show that high-ESVM firms earn a substantial return premium over low-ESVM firms. In the May 2011 to November 2016 period, a long-short strategy based on extreme ESVM deciles generates a raw return of 29% per annum and an abnormal return of 5.4% per annum after controlling for all five Fama-French factors. High-ESVM firms earn higher returns, either because they are more exposed to regulatory risk or because market participants underappreciate their latent value as target shells.

The existence of such a large shell premium helps to explain the infamous “size” effect in China – the empirical finding that small listed firms earn much higher monthly returns than large listed firms. We show that adding an ESVM-based factor to five Fama-French factors significantly improves return attribution, and effectively eliminates the Size premium. Our findings establish the shell effect as one of the most consistent predictive variables for equity returns in the Chinese stock market.

We also document a direct empirical link between the shell premium and regulatory shocks. Using an event-study approach, we examine returns to an ESVM-hedge portfolio in the days immediately surrounding the release of policy announcements that impact IPOs and RMs. Because a relaxed (tightened) IPO policy will decrease (increase) the expected shell value of listed firms, we expect high-ESVM stocks to earn relatively more negative (positive) returns around these announcement dates. The reverse should be true for policies that relax (tighten) rules governing RMs. We find strong support for these predictions around the six policy events in our sample period. As shown in Figure 4a, the day [-2 to +2] returns to the ESVM-hedge portfolio are quite positive for events that tighten IPO policies; similarly, Figure 4b shows that these returns are quite negative for events that tighten RM policies.


One puzzle is why, despite the large shell value, so few RM transactions are actually consummated: over our sample period the number of IPOs is approximately 10x larger than the number of RMs. Our results suggest that the owners of high-ESVM firms would rather hold onto control than sell their firms at their shell value, even when the underlying business is performing poorly. This evidence comes in the form of “major asset restructuring” (MAR) reports. The CSRC requires listed firms to file a MAR report whenever the firm’s operating asset base changes by 50% or more.

In Figure 5, we sort firms into deciles by their ESVM score as of the beginning of May each year. We then compute the percentage of firms in each ESVM decile that undertakes a MAR in the next 12 months. This figure shows that a shockingly large proportion (around 19%) of the firms in the top-ESVM decile will undertake a MAR. In fact, the frequency of MARs is 5 times larger for high-ESVM firms than for low-ESVM firms. Evidently, for the owners of many high-ESVM firms, the private benefits from controlling a publicly listed firm exceed the shell value they can obtain from surrendering that control.

This behavior points to another hidden cost of China’s IPO policies: floundering public companies do not face a natural “sunset” mechanism. Rather than facing the prospects of delisting and bankruptcy, because of the high shell value, owners and managers of floundering public companies can continue to acquire and operate new businesses. Therefore, China’s restrictive IPO regulations not only impede the ability of successful businesses to secure public funding, but they also prevent unsuccessful businesses from facing the natural consequences of poor stewardship.


Figure 5. The Percentage of firms that undertake a Major Asset Restructuring (MAR) over the next 12 months by ESVM Decile 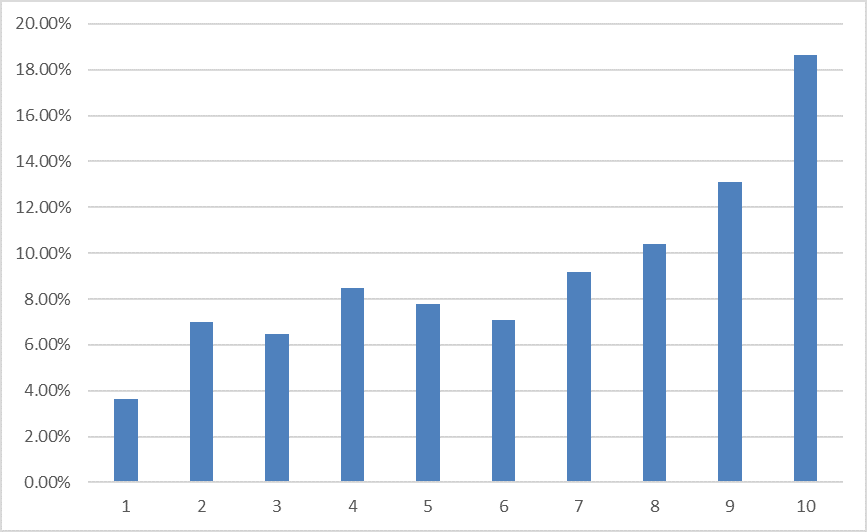 Collectively, our results show that shell value is the key to understanding many asset pricing puzzles, and even business investment decisions and M&A activities, in China. They highlight the importance of regulatory reform to Chinese capital markets, particularly with respect to the rules and policies governing IPOs. At the same time, we believe these findings also have implications for other capital markets in emerging countries where governments play a dominant role in the way financial markets operate.