We document that since December 2015 the People’s Bank of China (PBC) has followed a “two-pillar” exchange rate policy that aims to achieve both stability and flexibility. Based on a no-arbitrage model and options price data we estimate the credibility of the policy as well as its impact on the RMB/USD exchange rate. The model was able to correctly forecast the end of the two-pillar policy in May 2017.

Since December 2015, the People’s Bank of China (PBC) has followed a “two-pillar” exchange rate policy that aims to achieve both stability and flexibility. Based on a no-arbitrage model and options price data, we estimate the credibility of the policy as well as its impact on the RMB/USD exchange rate. Our model was able to correctly forecast the end of the two-pillar policy in May 2017.

Managed floating regime for the RMB

The Chinese currency, Renminbi or RMB, is currently in a “managed floating” regime. Every morning the PBC announces the “central parity rate” (also known as the midpoint price) and permits the RMB/USD exchange rate to fluctuate within a band around the central parity rate. Currently, the width of the band is officially 2% on either side. Recently, however, this has effectively been limited to 0.5%. To make the RMB more “market-determined,” the PBC reformed the formation mechanism of the central parity on August 11, 2015, such that the midpoint would be primarily based on the previous day’s closing rate in the spot market. Due to possible rate hikes by the Federal Reserve and the slowing Chinese economy, the RMB was subsequently expected to depreciate. To mitigate depreciation expectations, the PBC modified the policy on December 11, 2015, and introduced three trade-weighted RMB baskets or indices (i.e., CFETS, BIS, and SDR). As stated in “China Monetary Policy Report” (2016Q1), under the modified policy, “market makers must consider both factors when quoting the central parity of the RMB to the USD, namely the ‘previous closing rate’ and the ‘changes in the currency basket’.”

Several studies of the managed floating regime prior to 2015 focused on uncovering the unknown weights of the currencies in the PBC’s currency basket (see, for instance, Frankel 2009). Our own recent work (Jermann, Wei, and Yue 2017) has focused on formalizing the PBC’s modified approach since the end of 2015. We label this modified approach the two-pillar policy: one pillar refers to the “previous closing rate” that “reflects the market demand and supply situation,” while the other refers to “changes in the currency basket” that “maintains the overall stability of the RMB to the currency basket.”

is the central parity rate at day t+1,

is the rate that achieves the “stability" of the RMB index, and

is defined so as to keep the RMB index unchanged from the previous day. Formally, it is given by

where wUSD is the dollar’s weight in the RMB index and Xt represents the dollar basket of the non-RMB currencies implied by the RMB index. The China Foreign Exchange Trade System (CFETS) started publishing three RMB indices on December 11, 2015 and disclosed the corresponding weights. However, it was not officially stated which of the three indices the PBC uses and what weights the PBC puts on the two pillars.

Our empirical analysis suggests a 50-50 equal weighting scheme. The exact choice of the basket does not seem to matter much. Table 1 reports the results from regressing the changes in the central parity on the two pillars between December 11, 2015 and May 23, 2017. As shown in Table 1, across all three indices, the regression has a high R-squared of around 0.8 and its coefficients sum to essentially one. These results suggest a tight adherence to the two-pillar policy and that the weights on both pillars are roughly equal. 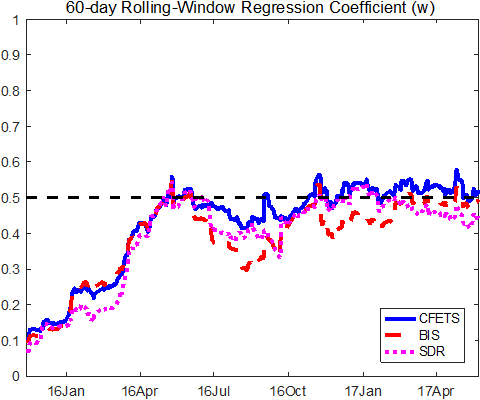 For the past one and a half years, the two-pillar policy—combined with an effective 0.5% trading band—has restricted the exchange rate dynamics. Expectations about further RMB depreciations and a possible change in policy have also affected exchange rates during that time. We build a no-arbitrage model to quantify these expectations.

We combine the documented properties of the two-pillar policy with the tractable no-arbitrage model from Jermann (2017). The model is very parsimonious and allows for an occasionally binding band around the central parity. In the model, we assume that the two-pillar policy may or may not continue in the future. In the latter case it would be replaced by an alternative policy with an exchange rate we label the fundamental exchange rate.

Fitting the model to spot rate and RMB option price data, we estimate the fundamental exchange rate and the continuation probability of the two-pillar policy. These estimations are possible because options are forward-looking. In particular, the option price can be decomposed into two parts that correspond to the two regimes, helping to identify the regime survival probability.

The model is estimated for the period between December 11, 2015, and May 23, 2017. We choose December 11, 2015 because it is the starting date of the two-pillar policy following the introduction of the RMB indices. We choose May 23, 2017 as the ending date of the sample because our model implies an essentially zero probability that the two-pillar policy would continue in the near future. This is consistent with the PBC’s statement on May 26, 2017, confirming that it had recently changed its policy and added a countercyclical factor to the formation mechanism of the central parity. Figure 2 plots the estimation results. 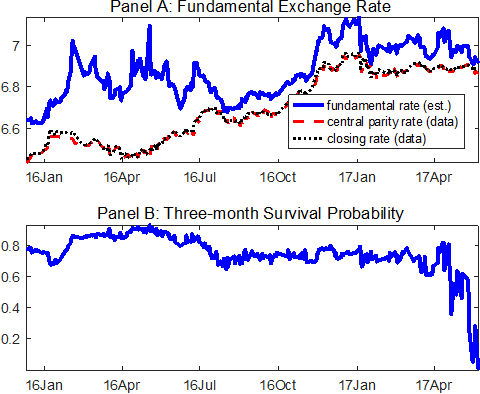 We find that during the sample period the RMB has been valued on average about 3% higher than its fundamental value (see Panel A of Figure 2), which is consistent with recent expectations of further depreciation of the RMB. The two-pillar policy had mostly high credibility over the sample. During May 2017, the probability dropped from about 60% to essentially zero (see Panel B of Figure 2), as the model correctly forecasts the approaching end of the two-pillar policy.