The Fertility Consequences of Air Pollution in China 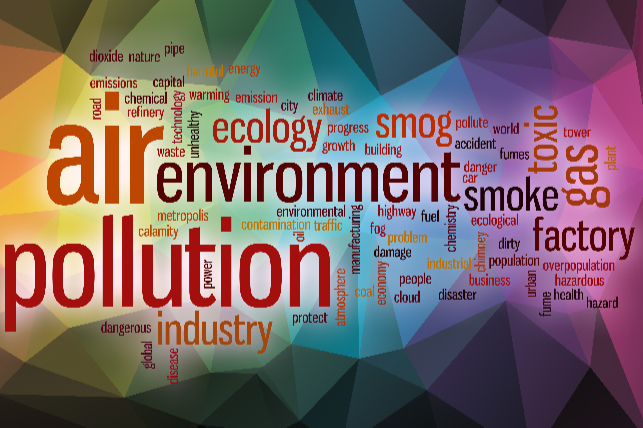 Increased pollution and decreased fertility have become two major challenges for long-term economic development in China. There has been a long-standing debate over what explains the coincidence of fertility decline with economic growth (Galor, 2011, Chatterjee and Vogl 2018), and those two issues may be interlinked.

It is well known that atmospheric contamination has detrimental effects on health outcomes and human capital development in children. As a result, air pollution is likely to change the parental expenditure on children’s health and education inputs, altering the shadow price of child quantity (i.e., the marginal costs associated with a new child) and consequently affecting fertility decisions. But little is known about how pollution distorts fertility behavior.

In our paper (Gao, Song, and Timmins 2022), we evaluate how air pollution alters actual fertility decisions by women of reproductive age in China and their perceived ideal number of children. We embed air pollution into Becker’s Quantity-Quality (Q-Q) model of human fertility (Becker and Lewis 1973, Becker and Tomes 1976). In our framework, the shadow price of a new child depends on the costs of investment in child quality (e.g., education expenditures and health expenditures). With severe air pollution, parents are likely to increase their expenditures on their children’s educational achievement and health status to mitigate the adverse effects of pollution exposure if they have a strong demand for child quality. However, pollution may not have a meaningful effect on those expenditures if parents’ demand is not as strong. As a result, the overall effect of pollution on the shadow price of the number of children, and consequently the fertility choices of individuals, depends on the parental preference for child quality.

In China, the level of air pollution is hazardous and the amount by which pollution has increased over the years varies greatly across different cities (Figure 1).  This allows us to look at behavioral responses to both the temporal change and the contemporaneous level of pollution. In addition, China’s One-Child Policy (OCP) differentially affects two groups of people. Since 1979, the OCP has restricted the number of children for Han people (i.e., limiting them to one or two children in most cases), and this has increased the demand for child quality among this group. However, ethnic minorities in China have not been restricted by the OCP, and we may not therefore expect to see the same relationship between pollution and fertility for that group under the Q-Q model. 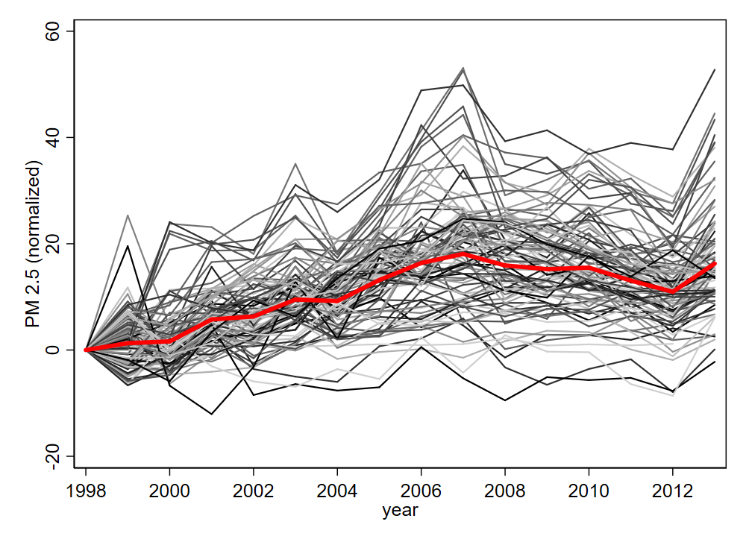 Notes: Temporal distribution of PM2.5 using the Global Annual PM2.5 Grids. The figure shows the increase in PM2.5 over time for the 100 largest cities in China, relative to the 1998 PM2.5 value (the difference with respect to 1998). The red line is the unweighted average.

Figure 2 uses city-level data to relate the number of new births per reproductive-age woman with the annual mean of PM2.5 concentration as well as the three-year change in PM2.5. The number of births is negatively associated with the change in PM2.5 over time (Figure 2a), whereas the relationship between fertility outcomes and yearly mean PM2.5 is slightly positive but unclear (Figure 2b). The pattern indicates that fertility decisions tend to be more responsive to the temporal change in pollution rather than the contemporaneous level of pollution. Figure 3 examines the association between pollution and age-specific fertility rate for cohorts aged 20–25 and 26–30, respectively. We find similar patterns: the age-specific fertility rate is negatively correlated with the three-year change in PM2.5, but has no detectable relationship with the short-term PM2.5 exposure, as measured by yearly PM2.5. The two figures jointly document a robust pattern of how changes in pollution over time affect people’s fertility choices. Nevertheless, the relationship between contemporaneous pollution and fertility is less clear.

Figure 2: Air Pollution and the Number of Births in China

Note: Fertility data come from the National Population Census 2010. PM2.5 data are from the Global Annual PM2.5 Grids. Reproductive-age women are defined as women aged 15 to 50. 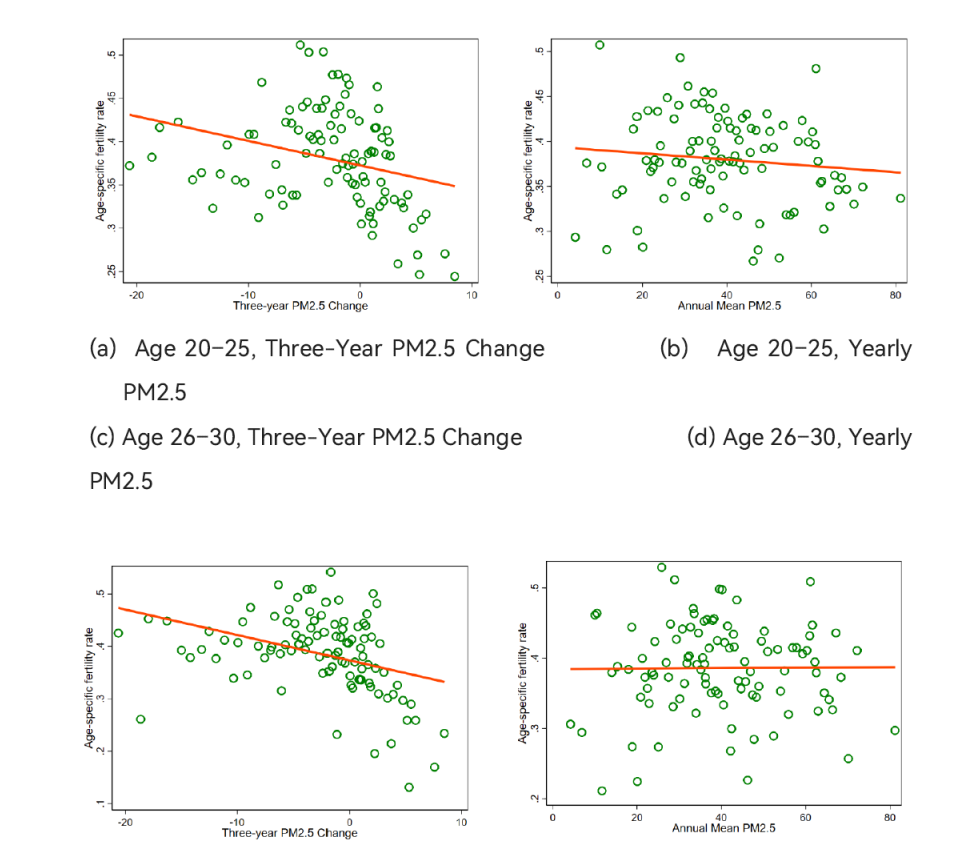 Note: Age-specific fertility rate is defined as the number of new births per woman of a particular age. Fertility data come from National Population Census 2010. PM2.5 data are from the Global Annual PM2.5 Grids.

We may be worried, however, that the simple relationship between air pollution and fertility is confounded by other factors, such as the size of the local industrial sector. To build confidence that our estimates indeed represent the causal effect of air quality on fertility, we assemble several datasets, and investigate this relationship under multiple independent sources of data variation. First, we derive exogenous fluctuations in pollution from wind direction and the historical placement of distant coal-fired plants (Freeman et al. 2019). And second, we leverage a meteorological phenomenon called thermal inversion, which traps pollution and worsens air quality (Arceo, Hanna, and Oliva 2016).

We first look at the fertility of ethnic Han people, who comprise approximately 92% of the Chinese population. Our results demonstrate the meaningful impact of pollution on fertility. Individuals’ fertility decisions are more responsive to the change in pollution over time in comparison with short-term exposure to pollution. If the PM2.5 concentration increases by 10 µg/m3 over three years, the probability of having a newborn child (within 12 months) declines by 12 percentage points. Having shown that pollution distorts actual fertility choices, we next explore its effects on individuals’ reported reproductive preferences. We find a pattern that is similar to the results of actual fertility outcomes: a temporal increase in exposure to pollution significantly lowers the desired number of children, whereas the contemporaneous exposure to pollution does not systematically affect people’s willingness to reproduce.

We next turn our attention to ethnic minorities who are not constrained by China’s OCP.  Our results reveal no significant relationship between pollution and fertility for the minority group. The OCP has had long-lasting effects on Han people’s preferences for child quantity and quality, leading to a heterogeneous fertility response to pollution between Han people and the minority group. In July 2021, China ended its birth control policy. But the end of the OCP did not meaningfully increase the fertility of Han people. Moreover, exposure to the OCP’s fertility restrictions has also led to higher educational attainment for men and women, as well as higher labor market participation rate for women (Huang, Lei, and Sun 2016, 2021). Therefore, the four decades of OCP implementation has increased Han people’s demand for child quality and lowered their preference for child number, which can explain why the fertility choices of Han people are responsive to pollution.

A large body of literature has already documented that pollution leads to economic losses by threatening health and lowering productivity (Graff Zivin and Neidell 2012, Khanna et al. 2021). We document how increased pollution lowers fertility. In China, declining fertility has led to a shrinking labor supply, hurting the economy and creating an increasingly serious aging issue. In Europe, fertility is also falling and the population is similarly aging, raising labor costs and creating fiscal burdens. Thus, our analysis proposes a new “indirect” channel by which pollution adversely affects economic development and sheds light on additional economic benefits associated with environmental policies.

We also provide insight on the debate mentioned earlier: as pollution is an inevitable by-product of production, increased pollution during industrialization may negatively affect people’s incentive to reproduce. Thus, environmental degradation may play an important role in explaining declining fertility during economic growth. In China, environmental pollution may exacerbate the effect of the One-Child Policy on fertility.