New firms have been an important engine of growth in the Chinese economy (Brandt, Van Biesebroeck, and Zhang 2012). Drawing on data on the universe of all firms in China, we study entrepreneurship and the creation of new firms in China through the lens of entrepreneurs who operate a series of firms over their lifetime, i.e., serial entrepreneurs (SE). In principle, their advantage over non-serial entrepreneurs may lie in their ability to identify new business opportunities and superior productivity; alternatively, it may rest in connections providing better access to scarce factors such as finance that facilitate entry. We find that ability is a major driver of serial entrepreneurship and that firms run by SEs are more productive. However, capital constraints are key to explaining the choice to operate these firms concurrently or sequentially. Risk diversification and the value of upstream/downstream linkages figure prominently in sectoral choices, conditional on the sector of the SE’s first firm.

A small number of studies for other countries document that upwards of one-quarter of all firms are started by serial entrepreneurs (Lafontaine and Shaw 2016; Hyytinen and Ilmakunnas 2007; Amaral, Baptista, and Lima 2011; Rocha, Carneiro, and Varum 2015; Carbonara, Tran, and Santarelli 2020). Studying serial entrepreneurs, however, is often constrained by data availability. One needs data capturing entrepreneurial activity of individuals over their lifetimes as well as data on the outcomes of these firms.

In this paper, we leverage two unique data sources for Chinese firms to examine serial entrepreneurship: the Business Registry of China, which includes information on every firm ever operated in China, and the Inspection Database. Through unique identifiers for the main owner(s) of each firm at the time of establishment, we can identify serial entrepreneurs. The registry also provides information on firm location and sector. The inspection database, which runs from 2008 to 2012, provides annual information to calculate firm TFP, debt, equity, and capital.

Notes: Authors’ calculations are from Business Registry data. SE stands for serial entrepreneur firms. Capital is calculated based on the registered capital in a firm.

Explaining Serial Entrepreneurship: The Role of Equity vs. Ability

Operating a firm requires capital, and entrepreneurs can use either their own equity or borrow to start a new firm. In settings such as China, however, borrowing is often limited by collateral constraints that allow entrepreneurs to collateralize only a fixed fraction of the capital stock.

Consider the first period of a simple two-period model of firm creation in which potential entrepreneurs receive the option to start a new firm each period with stochastic productivity, z1. Potential entrepreneurs also differ in terms of their endowment or equity, e. Based on their equity and ability, entrepreneurs fall into one of three regimes: no entry, capital constrained, and unconstrained. In Figure 1, the solid line z1∗(e) marks the indifference between entry and no entry. The entrepreneur chooses to operate the firm if and only if TFP is sufficiently large. The function z1∗(e) is falling in the level of equity e, implying that a larger e is associated with a (weakly) lower threshold z1∗(e). Among those for whom it is profitable to enter, the dotted line demarcates the capital constrained and unconstrained entrepreneurs.

The theory has immediate implications for the allocation of capital and debt across firms. Both installed capital and debt should be larger for more productive firms because it is optimal to install more capital in firms with higher TFP. High-TFP firms are therefore more likely to be debt financed. 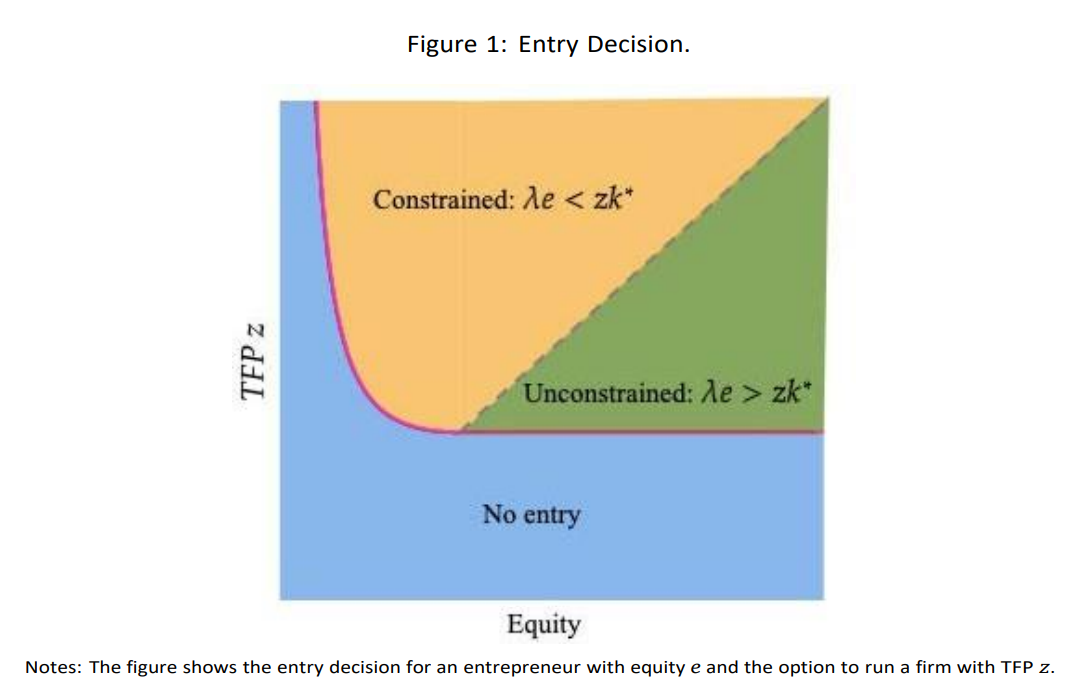 Installed capital should also be higher in firms with more equity. Figures 2 and 3 show that the data for Chinese firms conform tightly with these predictions. 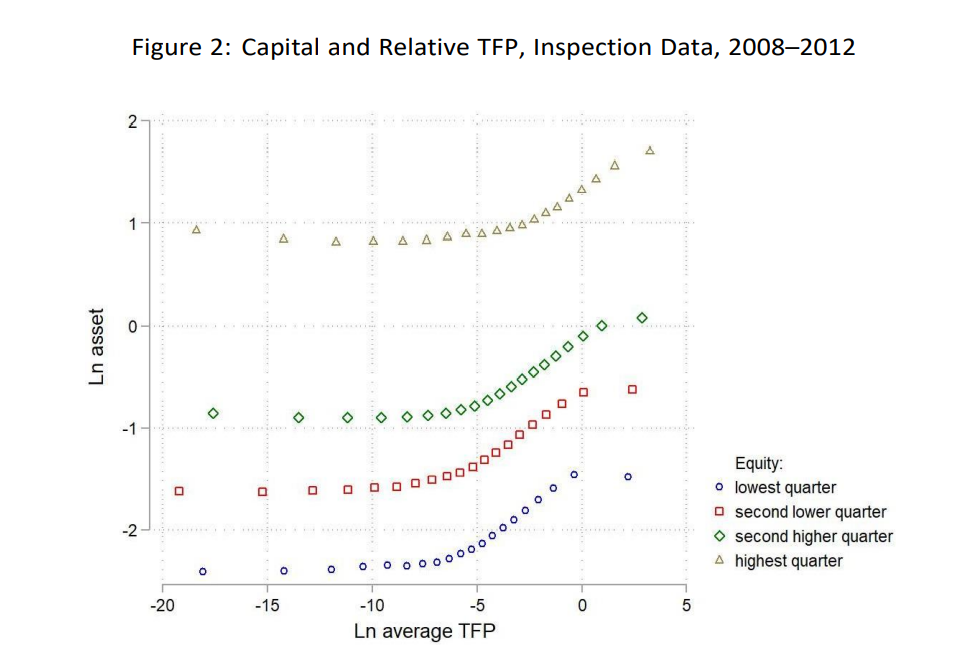 Notes: Authors’ calculations from the Inspection Database. The figure shows the relationship between the debt-equity ratios and TFP. Firms are sorted into four quarters according to their equity. For each equity quarter, firms are ranked on TFP and sorted into twenty ventiles. Each point in the figure plots log average TFP and average debt over average equity for firms in the ventile. All variables are computed relative to their averages of all firms in the same province-industry-year cell.

Firms started by SEs can be operated concurrently or sequentially, i.e., old firms are closed when new firms are established. Our theory predicts that entrepreneurs who have more capital and/or a more productive first firm are more likely to operate firms concurrently. Moreover, SEs with firms that have relatively similar TFP are also more likely to run them concurrently. Conversely, SEs with a larger gap in TFP between firms—one firm being substantially more productive than the other—are more likely to run these firms sequentially due to a larger opportunity cost of capital. These predictions are borne out in the data. 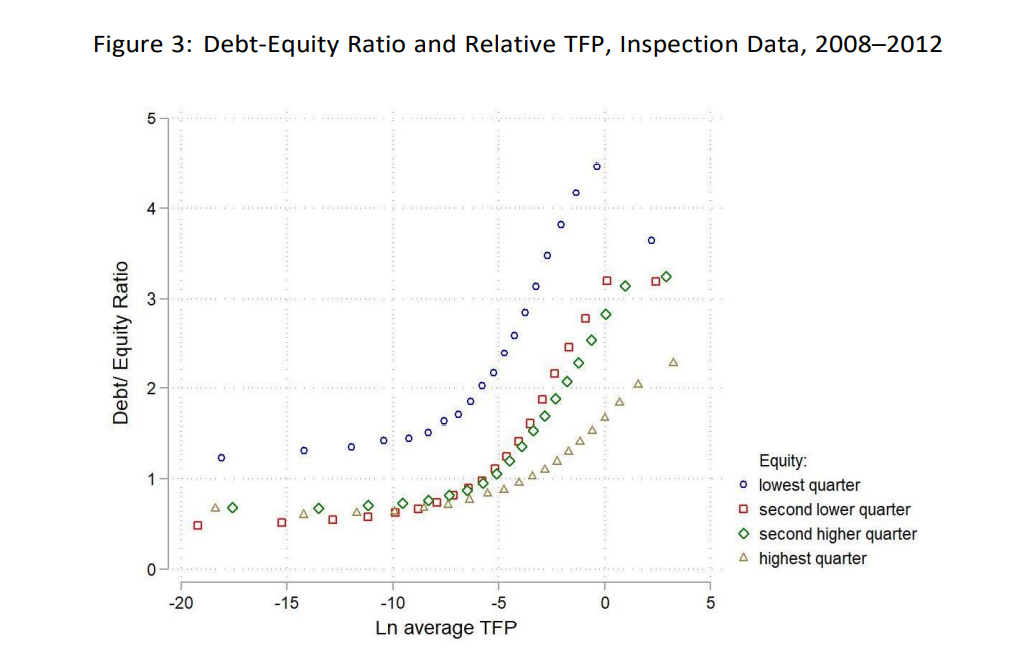 Notes: Authors’ calculations from the Inspection Database. The figure shows the relationship between the debt-equity ratios and TFP. Firms are sorted into four quarters according to their equity. For each equity quarter, firms are ranked on TFP and sorted into twenty ventiles. Each point in the figure plots log average TFP and average debt over average equity for firms in the ventile. All variables are computed relative to their averages of all firms in the same province-industry-year cell.

Notes: Authors’ calculations from the Registry and Inspection Database. The table compares the financial performance of first SE and second SE firms, relative to non-SE firms. All variables, except age, are computed relative to their averages of all firms in the same province-industry-year cell. ∗∗∗ − statistically significant at the 1% level.

An important decision of entrepreneurs is which sector to enter. We find relatively small differences in the unconditional choice of sectors of serial and non-serial entrepreneurs.However, in 60%of the cases, serial entrepreneurs start their second firm in a “distant” sector, defined here as different at the one-digit level from their first firm. In contrast, they start 72% of their second firms in the same prefecture as the first. Table 3 provides the breakdown by geographical and sectoral location.

We examine several alternative explanations for these choices including: selection by learning about entrepreneurial abilities, risk diversification, and upstream-downstream sectoral linkages and input-output complementarities. Selection by learning ties the entrepreneur’s choice of sector for the second firm to their productivity in the first firm—if the TFP of the first SE firm is sufficiently high, for example, entrepreneurs will remain in that sector; for lower values, they move to more distant sectors. Following Williamson (1975), ownership in upstream-downstream sectors as well as those with input-output complementarities may help mitigate information asymmetries and transaction costs.

Table 5 reports regressions of a normalized measure of starting the second firm in sector j given that the first SE is in sector i on downstream and upstream linkages, sector complementarity, and a measure of covariance of returns between the two sectors. Serial entrepreneurs are much more likely to start firms in sectors in which these linkages are more important, and sectors in which the covariance in returns is smaller.Given lower productivity in more distant sectors, our findings hint at important trade-offs in the sectoral choices of serial entrepreneurs. 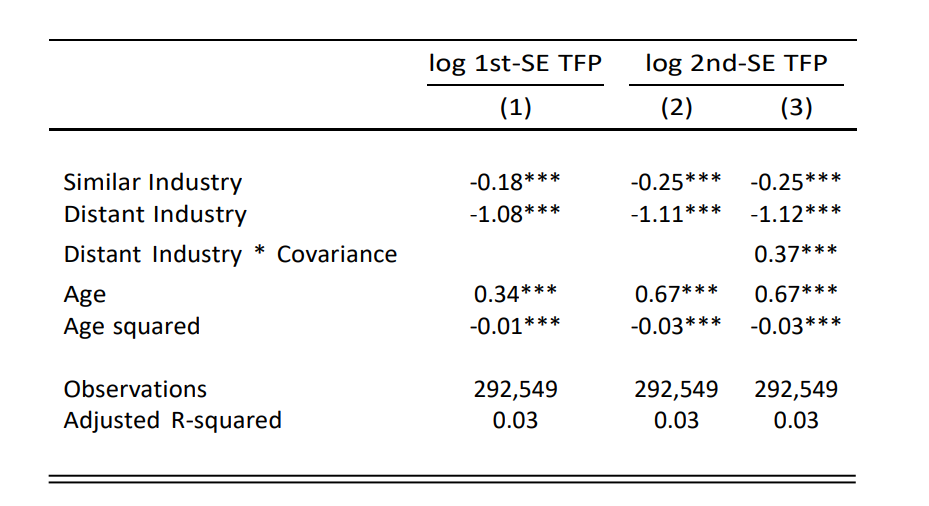 Notes: Authors’ calculations from the Inspection Database. First and second SE firms are identified from the Registry. The table compares the TFP of first SE (second SE) firms that are in the same three-digit industry, relative to first SE (second SE) firms that are in similar or distant three-digit industries. Industries are similar if they have the same one-digit, but different three-digit, codes. Industries are distant if they have a different one-digit code. TFP is computed relative to the averages of all firms in the same province-industry-year cell. The variable covariance is the covariance of the return of assets between each two sectors. This variable is standardized to have mean zero and a standard deviation of one. The notation ∗∗∗ signifies statistically significance at the 1% level. 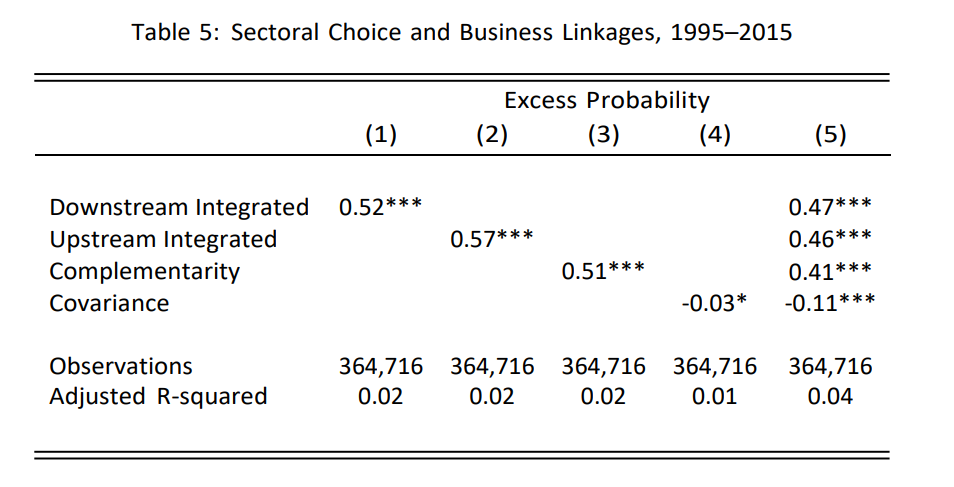