Our recent study analyzes the use of share pledging funds in the context of China. Survey evidence shows that a majority of the largest shareholders (67.3%) used pledging funds outside their listed firms, including financing their entrepreneurial activities. Empirically there exists a positive and likely causal relation between shareholders’ pledging transactions and their entrepreneurial activities. Shareholders with better access to share pledging invest more heavily in industries with above-median growth potential. 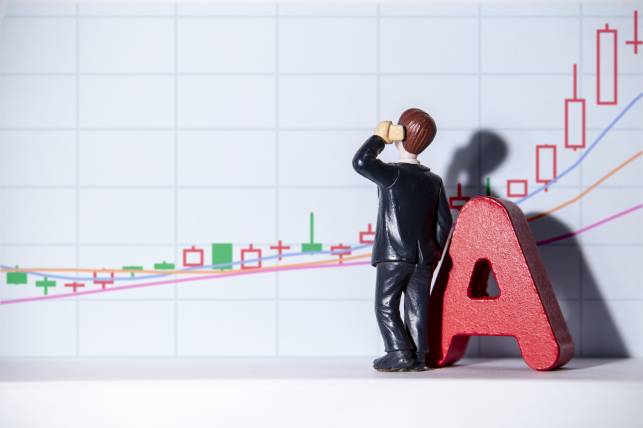 Share pledging, at the intersection of the banking system and the stock market, is a financing vehicle widely used by shareholders across global financial markets. In the past decades, share pledging has grown enormously in China, where the market suspected that the pledging funds mainly circled back to the listed firms (e.g., Meng, Ni, and Zhang (2019); Pang and Wang (2020)). In the same period, the Chinese economy witnessed an upsurge of entrepreneurship in the private sector, which was unlikely to be financed by the banking system largely owned by the state (Brandt and Li 2003; Song, Storesletten, and Zilibotti 2011).

Considering the financing flexibility embedded in the share pledging market, together with listed firms’ shareholders’ proven business acumen and strong social connections, our recent study (He, Liu, and Zhu 2022) explores the role of share pledging (as a financing vehicle) in promoting entrepreneurial activities in the context of China.

China’s share pledging system was established in the mid-1990s and has been well received by shareholders since then. The volume of newly pledged shares grew at an annual rate of 18.6% between 2007 and 2020. At the market’s peak in 2017, more than 95% of the A-share listed firms had at least one shareholder pledged, with the total value of pledged shares amounting to 6.15 trillion RMB (more than 10% of the total market capitalization).

Before 2013, share pledging was solely organized in the over-the-counter (OTC) market, where commercial banks and trust firms are major lenders. In 2013, share pledging was introduced to the Shanghai and Shenzhen stock exchanges, with securities firms being the major lenders. This initiative greatly expedited the development of share pledging: after this policy shock, the annual transaction volume between 2013 and 2020 reached 204 billion shares (1,057 billion RMB), compared to 39 billion shares (192 billion RMB) per annum during 2007 and 2012.

Figure 1: Shares pledged in the Chinese market, 2007–2020. This figure plots the number of listed firms’ shares newly pledged by major shareholders who hold 5% of the total shares or more in each year from 2007 to 2020.

In late 2017, the authorities started to tighten regulations on share pledging, and the Chinese share pledging market gradually shrank. As shown in Figure 1, the annual growth rate of pledging volume was -18.9 % between 2018 and 2020. 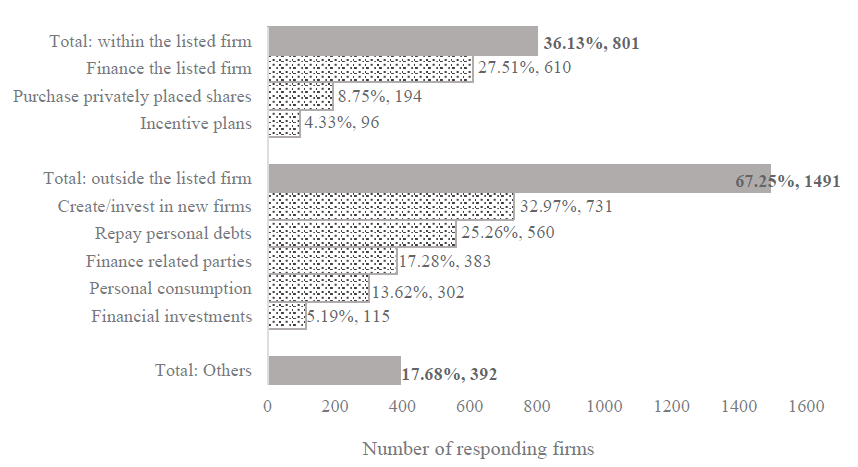 We next break down how pledging funds are used outside the listed firms by taking advantage of a joint survey by Tsinghua PBCSF and the China Securities Regulatory Commission in 2019. We collected responses from 3,626 of the 3,628 Chinese public firms, representing a response rate of 99.99%. As Figure 2 shows, 60.1% of the responding firms reported that their largest shareholders had used share pledging in the past. Within those firms with pledging shareholders, 36.1% reported that their shareholders decided to support their listed firms with the proceeds. However, a larger fraction of them (67.3%) used the pledging funds outside the listed firms. Among them, their largest shareholders could repay personal debts (25.3%), spend for personal consumption (13.6%), and/or make financial investments (5.2%); but, most relevant to our study, 33.0% of them invested the funds outside the listed firms and established/invested in new firms.

This last point is the direct evidence that share pledging is not only a financing tool to support the listed firms, but also a potential source of financing for entrepreneurial activities. First, share pledging loans are less costly and more accessible to potential entrepreneurs. The interest rate is comparable to that of bank loans, ranging from 5% to 15%. Second, shareholders are able to use share pledging loans (and follow-on rollovers) to finance long-term entrepreneurial projects. Although a median pledging loan’s maturity was 1.0 year in our sample, it was rolled over for once by the shareholder and reached an effective maturity of 2.1 years. The 75th percentiles for the rollover number and the effective maturity were 5.0 times and 3.5 years, respectively.

We utilize the launch of the exchange market in 2013 as a quasi-natural experiment, and perform a difference-in-differences (DiD) analysis to establish the causal relation from share pledging to entrepreneurial activities. We posit that the launch generates significantly larger supply shocks on share pledging to natural person (individual) shareholders than to legal entity shareholders (companies or organizations that hold a listed firm’s shares), who are ultimately owned by natural persons. Typical legal entity shareholders in the Chinese stock market include companies, financial managers (e.g., mutual funds), and nonprofit organizations (e.g., university endowment funds). 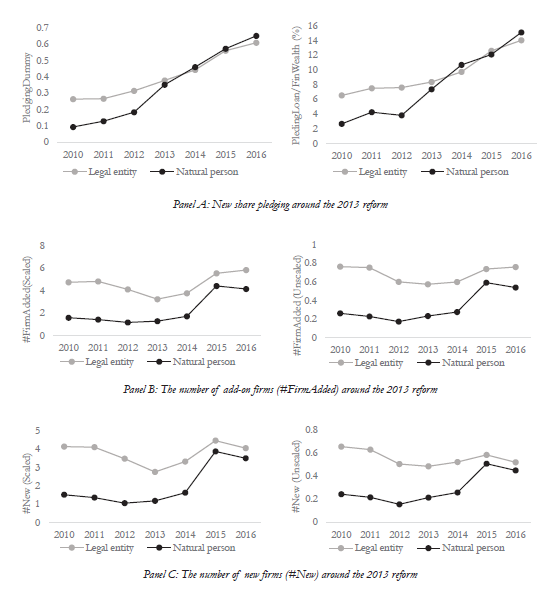 Figure 3: Share pledging and entrepreneurial activities around the 2013 reform. Panel A plots the average probability and loan amount of new share pledging in each year for natural person and legal entity shareholders. Panel B and C plot the average number of add-on firms (including new firms created by a shareholder and existing firms in which a shareholder makes her first investment) and new firms held by natural person and legal entity shareholders around the launch of the exchange market in 2013, respectively.

We also show that the “Mass Entrepreneurship and Innovation” policy and the new corporate law in 2014, which encouraged entrepreneurial activities by grassroots individuals and hit the bottom distribution in Chinese entrepreneurship, is unlikely to drive our DiD results. In our sample, the shock on entrepreneurship took shape starting in 2013, which was one or two years before these policies. More importantly, these policies target early-stage entrepreneurs, which do not overlap with those well-established major shareholders of listed firms we consider. In fact, during our sample period of 2010 to 2018, the median registered capital of firms created by listed firms’ natural person shareholders is 40 times that of all firms in the economy. The size distribution of firms created by shareholders around the policy shocks suggests that, after 2014, listed firms’ natural person shareholders create more larger firms than before (the fraction of firms with more than 20M RMB registered capital increases from 40.5% to 48.6%); in contrast, in the economy the creation of new firms mostly falls into the (501K,1M] and (1M,5M] buckets, with frequency increases of 10.2% and 5.3%, respectively. Importantly, there is no clear increase of new firm creation in these two buckets in our sample with listed firms’ natural person shareholders.

Furthermore, our findings on shareholders’ capital allocation are consistent with those on firm numbers. Shareholders with better access to share pledging invest more heavily in industries with above-median growth potential, and their new equity investments seem to be efficient.