Currency Carry Trade by Trucks: The Curious Case of China’s Massive Imports from Itself

Capital controls are common in many developing countries. With capital controls, the standard financial market transactions needed for currency carry trade are hard to implement. Yet, as long as there is a big difference between domestic and foreign interest rates, the incentive to engage in currency carry trade is present. Using detailed trade data reported by both mainland China’s and Hong Kong’s governments, we present evidence that indirect currency carry trade likely takes place via round-trip reimports. We also show that greater state control in terms of more state-owned firms does not reduce such “carry trade by trucks.” 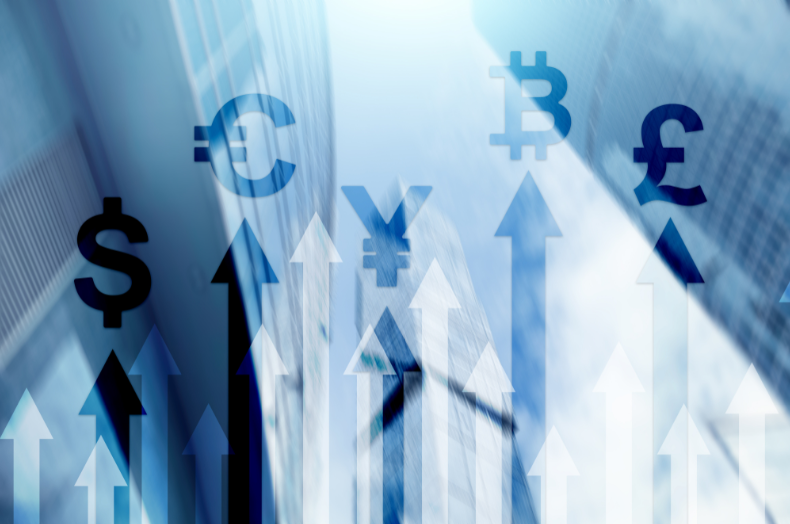 Currency carry trade—a form of risky arbitrage involving borrowing in one currency with a relatively low interest rate and lending in another currency with a higher interest rate—normally takes place in the financial market. In many countries, however, there are restrictions and even outright bans on cross-border financial transactions that are meant to take advantage of the differential between onshore and offshore interest rates. China is one such country. Yet, as the incentive for carry trade still exists, some agents may look for other ways, such as trade in goods, to bypass the restrictions. 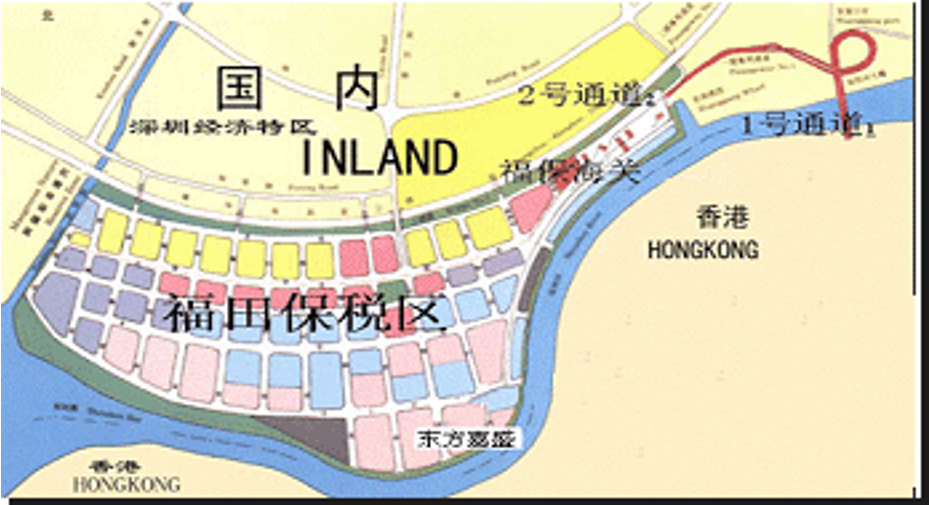 Since the 2008 global financial crisis, the US Federal Reserve and the central banks in other major advanced economies have lowered the interest rates to almost zero. We use LIBOR (SHIBOR, respectively)—London (Shanghai, respectively) Interbank Offering Rate—for the USD (RMB) to capture the returns of low-risk dollar (RMB, respectively) assets. Figure 1 shows that the annualized rate of three-month LIBOR for the USD during 2010–2015 is low and ranges from 0.23% to 0.43%, while the SHIBOR-3M annualized rate for the RMB is much higher, ranging from 2.5% to 5.2%. Besides, since the RMB was unpegged from the dollar in 2005, it appreciated from 8.28 yuan per dollar to 6.04 in 2014. In the absence of capital controls, such a difference in the returns on investing in the RMB and the USD would have offered some agents strong incentives to engage in currency carry trade (i.e., shorting the USD while longing the RMB). 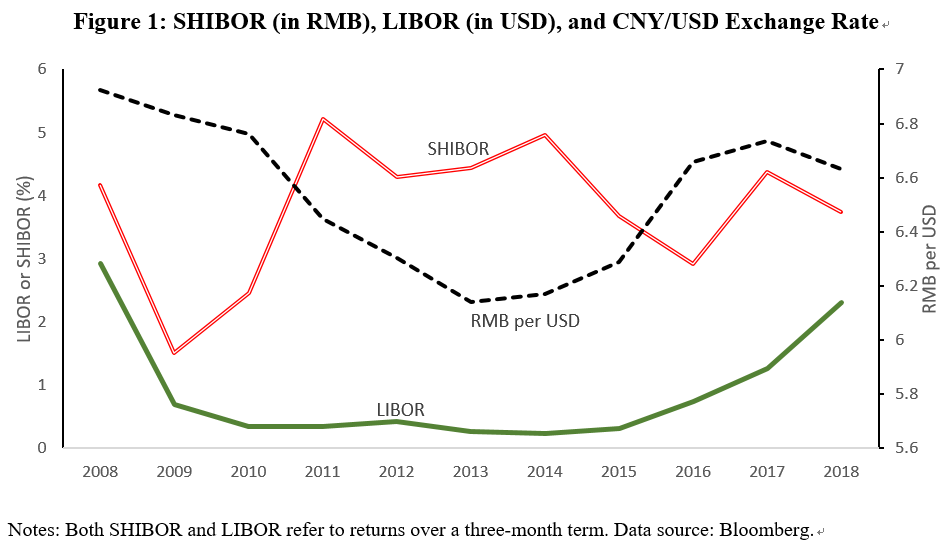 In the case of China, where capital controls are tight while trade in goods is more liberalized, this creates an opportunity for disguised carry trade through trade in goods. Two recent papers have inferred the presence of carry trade in China’s normal trade. Using China’s monthly trade data, Lin, Xiao, and Ye (2020) show that trade of cost-efficient products (with higher V/W ratios) responded significantly more to carry returns than cost-inefficient products. Liu, Sheng, and Wang (2021) study how firms manipulate trade data to evade capital controls in China using direct trade between Hong Kong and mainland China. Their model predicts a correlation between the reporting gap of bilateral trade and the exchange rate spread, especially when customs officials are less likely to detect fraudulent transactions. These papers do not investigate any special role played by reimports.

In Liu, Tang, Wang, and Wei (2022), we use detailed micro-level trade data from China and Hong Kong SAR to study how round-trip reimports (e.g., Country A exports good X to Country B and then imports it back from Country B) are used to engage in currency carry trade. China is a major player in reimports. Roughly 8% of China’s total imports are from itself, making itself the fifth largest source of its imports, right after the United States, but before Germany, France, and the United Kingdom during 2002–2017. It also accounts for nearly 90% of mainland China’s total imports from Hong Kong. Our evidence suggests that most of the currency carry trade is done through reimports between Shenzhen and Hong Kong.

Note that reimport behavior itself is not illegal and can serve a useful business purpose. For example, many firms have manufacturing facilities in Guangdong and a distribution center in Hong Kong. They often send their factory output first to the Hong Kong distribution center for sorting, bundling, and labeling, before re-exporting it to worldwide locations, including China. In addition, export-processing firms in China sometimes export their goods to Hong Kong and then import back to exploit the various preferential tax treatments, such as exemption of import duties and value added tax reduction. Regardless of the motivations, this kind of trade would be classified as “reimports” by China Customs.

How Does Currency Carry Trade Work Through Reimports and Why Is Hong Kong Special?
Suppose the interest rate differential is such that an agent has an incentive to borrow in US dollars and move the money into China to invest in assets with higher expected returns for a period of time before moving the investment out of China later to reap the profits. When the agent in Hong Kong imports a product from China, it has a legitimate reason to take out a loan from a Hong Kong bank to finance the purchase. The money is then sent to the Chinese exporting firm, ostensibly to pay for the value of the imports. The Chinese firm can then invest the money in a local financial product for a period of time (say six months), gaining a return that is higher than the interest rate on the original loan in Hong Kong. Once the financial product matures, the firm can convert the final payoff from the RMB to Hong Kong dollar (HKD). This can be done by having the Chinese exporting firm reimport the same product or slightly processed product back to mainland China from Hong Kong. This process of exports and reimports allows the agent to short the low-interest HKD and long the higher-interest RMB, mimicking a currency carry trade process.

In principle, the goods used in exports and imports need not be the same for currency carry trade. In other words, regular trade as opposed to reimports (exporting and reimporting the same goods) can be used in the quasi-financial arbitrage as well. However, the net returns on currency carry trade need to deduct the costs of arbitrage including the physical transportation costs in both exports and imports, as well as the costs of clearing the customs when the goods cross borders. Reimports provide a unique way to save some costs. Moreover, because Hong Kong and mainland China share a common border, and the free trade agreement between the two (Closer Economic Partnership Arrangement) means zero tariff on imports from one place into the other, reimports through Hong Kong would be more cost-effective than through almost any other location. An extreme version of reimports is “one day round-trip trade”: for example, a container truck leaving Shenzhen for Hong Kong in the morning and coming back to Shenzhen with the same content in the evening. We coin the phrase of “carry trade by trucks” because most of the goods between Hong Kong and mainland China are through Shenzhen by trucks.

Empirical Strategy and Identification
As “carry trade by trucks” involves illegal evasion of capital controls, it is hard to observe it directly in the data. Our identification explores the implication of currency carry trade for cross-product heterogeneity in reimports. Specifically, to minimize transportation costs in reimports, it would be more profitable for currency carry traders to use goods that have a high value-to-weight (V/W) ratio. We therefore examine whether the value of reimports in products with a high V/W ratio rises more than that in other products when the CNY-USD carry returns are higher. This will be in spirit a difference in differences specification.

We find that the average V/W ratio in China’s reimports is $8.14/kg, much higher than that in either China’s overall imports (($0.63/kg) or exports ($0.95/kg). Among the HS six-digit products of China reported reimports over 1995–2017, the top three based on total trade values are cell phone parts and other communication equipment (851770), semiconductors and integrated circuits (854231), and small-sized liquid crystal display panels, etc. (901380). Since Chinese reimports are mostly through Hong Kong, it is worth noting that regular imports from Hong Kong also have a much lower V/W ratio ($1.72/kg). These differences in the V/W ratios are consistent with the interpretation that if reimports are the preferred tool for currency carry trade, it makes sense for carry traders to concentrate on goods with a relatively low transportation cost for a given amount of money moved. As Figure 2 illustrates, reimports of products with a high V/W ratio move closely with the carry return index, while products with a low V/W ratio do not appear to be correlated with the carry returns. 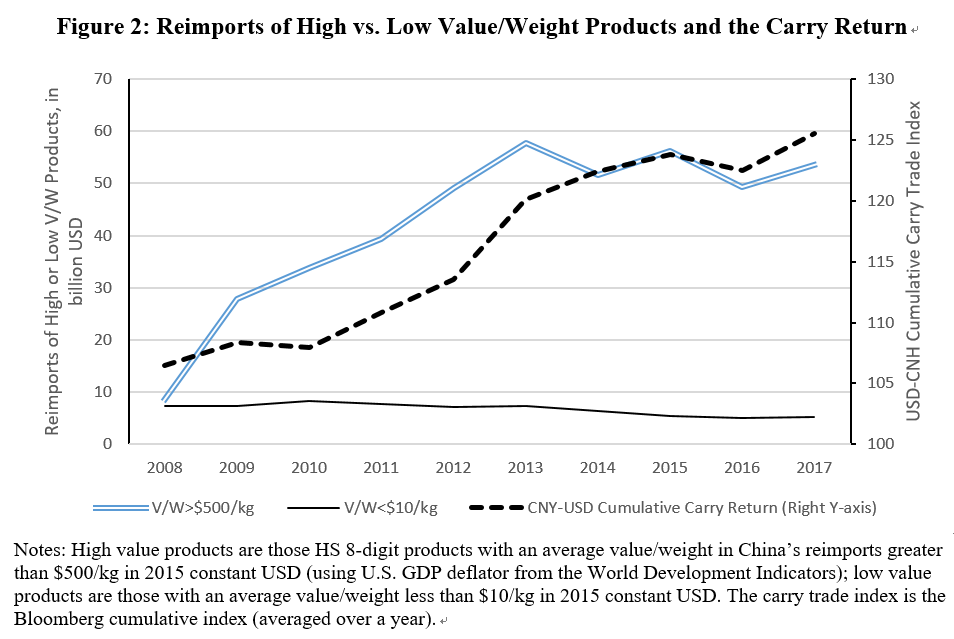 To ensure that our key regressor, carry return, is exogenous, we exploit an insight from monetary economics: a country’s interest rate tends to decline as its money supply increases. If country A’s money supply grows faster than that of country B, A’s interest rate tends to decline relative to that of B. This suggests that the relative growth of the money supplies is a plausible instrumental variable for the change in carry returns between two currencies. Because Hong Kong pegs its currency rigidly to the US dollar, its interest rate moves in lock step with that of the United States. We use the relative growth of the Chinese and US money supplies as an instrumental variable for change in the carry returns.

Main Findings
Using annual reimport data from China Customs, we find a strong correlation between China’s reimports and carry trade returns, especially for products with lower trade costs as measured by higher values per kilogram (value/weight or V/W). We interpret this as evidence of currency carry trade. The evidence is surprisingly stronger for state-owned enterprises than domestic private or foreign firms. We also control for other motives behind reimports, such as the avoidance of value-added taxes. As a further confirmation, when using monthly transaction-level trade data from Hong Kong Customs, we find a strongly positive correlation between Hong Kong’s reexports of Chinese products back to mainland China and the interaction between the carry trade return index and the V/W ratio of these products. Finally, we also find that the reporting discrepancy gap, defined as the (log) ratio of the value of reimports reported by China Customs to the value of reexports reported by Hong Kong Customs of the same product, is positively correlated with the interaction term between the carry return index and the product differentiation dummy.

Conclusion
Our paper empirically uncovers camouflaged carry trade activities. The method can be used to identify similar behaviors in other countries or contexts. Although the benefit of shorting USD and longing RMB will not persist over the long run, the opportunity for arbitraging still exist as long as the capital controls are still in place. Sometimes, traders may benefit from the opposite strategy by shorting RMB and longing USD, and the same logic applies to other currencies as long as a country has capital controls but free movement of goods across its borders. China has plans to relax capital controls (e.g., by allowing the establishment of wholly owned foreign banks), but this will be a gradual process and various types of capital controls and regulations will still be binding in the foreseeable future. Besides, the quantitative easing after the 2008 Great Recession and other events such as the COVID-19 pandemic may still create a similar carry trade opportunity due to recent stimulus packages from many major economies. In sum, the idea of carry trade by trucks is not specific to just one period or one country.

Our research findings are of practical value. For instance, they can help governments and customs agencies detect evasion or avoidance behaviors, better understand the relationship between trade data and financial flows, and design appropriate countermeasures to address the problem. Our findings also show that liberalizing the exchange rate and interest rate regimes can curb the nonstandard forms of carry trade activities, reduce resource waste, and improve overall economic efficiency.