This study documents women’s declining relative wages and labor force participation in China over the last two decades, in contrast with the predictions of the structural transformation literature, suggesting that rising service sector share is associated with narrowing gender gaps. We show that women’s labor supply elasticity to spouse’s wages increased dramatically between 1995 and 2013, which is consistent with a U-shaped relationship between economic development and women’s labor market outcomes. Using a model of structural transformation, we show that labor market barriers for women have increased over time and that removing these barriers and increasing service sector productivity can boost both gender equality and economic growth in China. 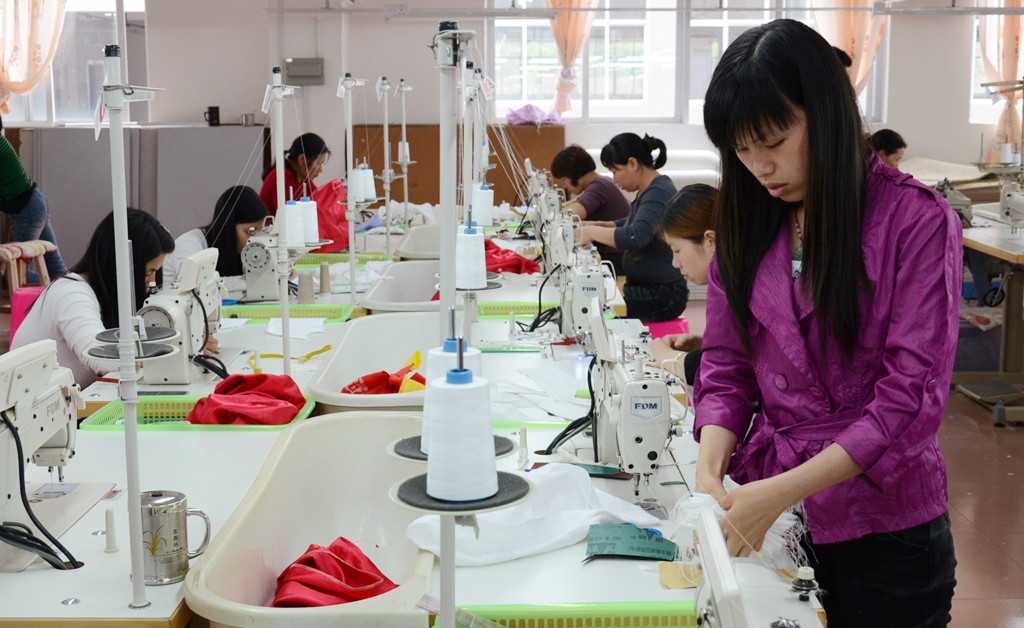 Over 25 years have passed since the adoption of the Beijing Declaration and Platform for Action—the most ambitious and comprehensive blueprint for advancing women’s rights. Over the last few decades, progress was made toward greater gender equality in various areas. More girls are enrolled in school, fewer women die in childbirth, many OECD countries have seen substantial gains in female labor force participation (FLFP), and more women occupy high-level political positions than ever before. However, significant gaps remain across many dimensions and vary widely across and within countries, with some countries even witnessing a reversal in women’s fortunes.

Generations of Chinese men and women have grown up with the idea that “women hold up half the sky,” which has contributed to the country’s strong female workforce. Most recently, these ideas have been challenged as China’s gender gap in labor force participation rates increased by a quarter, from 12 percentage points in 1995 to 15 percentage points in 2019. The increase in the gender earnings gaps is even more significant. While many countries have moved closer to parity, China now ranks 106th in the global gender gap rankings among 153 countries, slipping from the 63rd position in 2006, according to the World Economic Forum (2019).

The deterioration of women’s relative position in Chinese labor markets took place amidst rapid economic growth and expansion of the service sector—a stylized fact that is at odds with the predictions of structural transformation models (Ngai and Petrongolo, 2017; Rendall 2018). Theory, in fact, suggests that growth of the service sector is generally associated with higher FLFP as women enjoy a comparative advantage in services—as documented in cross-country empirical evidence (Olivetti, 2013; Rendall, 2013). In Brussevich, Dabla-Norris, and Li (2021), we shed light on China’s rebalancing from a gender perspective and offer explanations for why this prediction has so far not materialized in China.

We use household data from the Chinese Household Income Project survey for the period 1995–2013 to examine the drivers of widening gender gaps in China. One important factor can be the income effect, resulting in the U-shaped relationship between the female LFP rate and income growth found in the empirical literature. The underlying intuition is that, at low levels of development, women intensively participate in economic production, particularly at home and in agriculture. As the industrial sector, where men have a comparative advantage, grows and incomes reach a level where returns to dual-earner households begin to diminish in terms of additional household consumption, women begin to exit the labor force. At higher levels of development, with increasing educational attainment and a growing service sector, where women have a comparative advantage, there is an upswing in FLFP rates. At the province level, we indeed find a negative correlation between GDP per capita and FLFP rates, with wealthier provinces in China exhibiting lower FLFP rates. This finding suggests that China is at the second stage of development, where the importance of dual-income households is diminished.

At the individual level, we show that changes in the labor supply of married women primarily drive the observed aggregate decline in FLFP over the last decades. Figure 1 shows gender gaps for married and unmarried workers, measured as percent differences of women’s hours and annual earnings relative to men, conditional on observed characteristics. We find that, between 1995 and 2013, conditional hours gaps, in fact, reversed for unmarried women and widened for married women. Although relative earnings declined for all women, this decline was more dramatic for married women. In addition, we find that the hours gap widened more in urban areas compared to rural areas, suggesting that lack of childcare options, including from extended family, potentially contributed to the decline in FLFP. 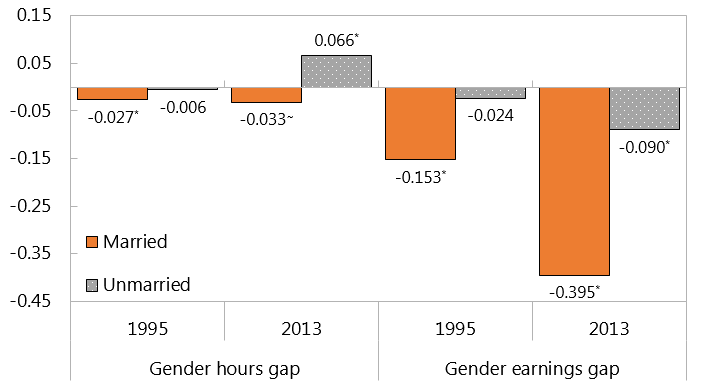 We find that married women’s labor supply elasticity to both own and spouse’s wages increased in absolute terms from 1995 to 2013, intensifying the selection of women in the labor force. Specifically, we show that married women’s own wage elasticity increased from 0.05 in 1995 to 0.3 in 2013 while spouse's wage elasticity declined from −0.07 to −0.17. This contrasts with other advanced economies, where women became less responsive to own wage offers and spouse’s wages over time, consistent with a shift of female employment from “jobs” to “careers” (Blau and Kahn, 2007; Heim, 2007). We also find that, while, in 1995, the presence of a child in the household had little effect on female labor supply, by 2013, women were significantly more likely to reduce work hours after having children.

Based on the empirical evidence, we conclude that the unprecedented rise in incomes across China during the last few decades has rendered female participation in the workforce a choice rather than a necessity. Our evidence also suggests that limited availability of childcare, particularly in urban areas where many women cannot rely on grandparents or their extended family for care, can preclude women from joining the workforce. In addition, existing evidence from cross-country comparisons suggests that China falls behind the advanced and emerging economy average in providing economic opportunities for women, including discrimination in hiring and firing practices (Zhang and Huang, 2020). Taking our empirical evidence to theory, we show strong economic impacts of policies to remove labor market participation barriers (e.g., removing discriminatory practices against women) and speed up marketization of home-produced services (e.g., child and elderly care, cleaning).

In a model of structural transformation, we show that barriers that could emanate from labor market regulations, employer discrimination, and lack of affordable child and elderly care options increased over time. Our counterfactual analysis shows that reducing barriers to the level observed in an advanced economy such as the United States can narrow gender wage and labor force participation gaps by 5 and 15 percentage points, respectively. Accelerating marketization of services by increasing productivity of the market service sector (e.g., removing credit and labor market frictions and making it easier for women to achieve greater work-life balance) can further narrow the gender wage and labor force participation gaps, boosting aggregate output by 4.9 percent over the long run.

There is considerable scope for policies to reduce gender inequality in the labor market. Most recently, the COVID-19 pandemic has brought these issues to the fore in light of its disproportionate impact on women and their employment opportunities in China and elsewhere.  Existing gender gaps are likely to widen due to the elevated risk of job losses in the affected sectors and the significantly higher family and childcare burden women face. China has framed its recovery policies to be more inclusive and balanced, presenting an opportunity to decisively tackle the gender gaps in the labor markets. This includes removing discriminatory practices against women in the workforce and in pay to level the playing field. The availability of low cost, high quality child and elderly care would lift the burden on women seeking employment and on firms that would have to pay a premium to hire women. Easing regulations and entry barriers to boost productivity in the service sector would also have a knock-on effect on reducing gender gaps, while supporting the economy.