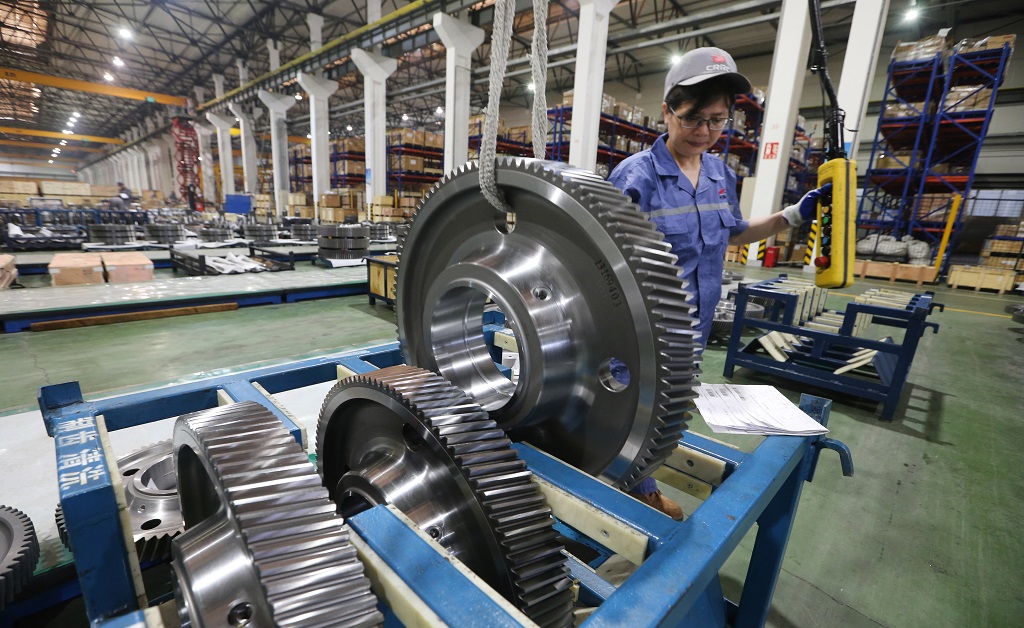 We study the export decision of Chinese manufacturing firms, both public and privately owned enterprises. In 2019, China’s exports of goods accounted for 13% of goods exported in the world and around 20% of China’s GDP (see Note 1). The importance of understanding the determinants of trade patterns in China goes beyond its national borders. Observed export decisions contradict the prediction of the standard trade model in which exporters are more productive than non-exporters. Instead there is significant overlap in the distributions of productivity, particularly for private enterprises. To confront these observations, the economic framework stresses the dynamic decision by both state controlled and private entities to export in the face of labor adjustment costs. The analysis argues that labor adjustment costs along with variations in demand are needed to understand employment and trade dynamics.

The standard approach to determining trade status rests on a simple and powerful rule: high productivity firms are exporters, others only sell domestically. But, at least for China, this simple prediction misses key elements of the picture.

This figure shows the distributions of productivity, measured as average labor productivity (revenue per worker), for state and private controlled enterprises by export status. Year, industry, and location-fixed effects are removed.

Our paper builds on three aspects of these figures (see Note 2). First, if selection into exporting is not determined by productivity alone, then what factors determine export status?  This is a key question in our research.

Second, ownership matters. In Figure 1, exporters are a larger share of productive plants for the SCE while for PCE the opposite is true. Moreover, SCE having a low export share while almost 40% of the PCE, who export, have an export share over 95%. Why does ownership matter?

Finally, the attention paid to distributions of average revenue labor productivity, as in Figure 1, is misleading. For many commonly used production functions, in the absence of adjustment frictions, the distribution of the average revenue product of any factor will be degenerate. This  is not the case in the Chinese data.

To confront these issues, our analysis adds a couple of elements to traditional trade models (see Note 3). First, labor adjustment costs play a central role in the analysis. The presence of adjustment costs limits redistribution from low to high productivity plants and thus generates differences in productivity across plants.

Second, in our model, the profits of an enterprise are impacted by demand shocks, both domestic and foreign, rather than productivity alone. This serves to limit the sorting by productivity. In particular, with these costs and shocks the model is able to match the distributions of productivity of exporters and non-exporting plants. Some exporting plants may not be very efficient but produce a valuable good in export markets. Thus some exporters appear less productive than a firm selling only to the domestic market.

Finally, the emphasis on average revenue labor productivity is replaced by a more comprehensive measure, termed profitability, that combines both demand and productivity shocks (see Note 4). In this way, a plant may not be very productive in terms of output per worker but may produce a high demand product and thus sell it in foreign markets.

Plants, regardless of ownership type, choose both labor inputs and trade status to maximize the expected discounted value of profits. These profits reflect revenues from both domestic and, if the plant is an exporter, foreign markets as well as the costs of adjusting the labor input and trade status.

The enhanced model is estimated through a simulated method of moments approach, where the moments come from Chinese manufacturing plants. With this procedure, the parameters are chosen so that the moments generated by the model match those in the data. The moments chosen for this exercise includes those that summarize trade as well as labor adjustment patterns. The distributions used to motivate the analysis, such as Figure 1, are not included as moments to match but are studied after the estimation.

The findings come from both the parameter estimation and additional exercises. Once the parameters are estimated a number of counterfactual exercises are presented to address the main question of the paper: what determines trade status?

The model parameters are estimated by ownership, allowing for both labor adjustment and trade costs. While parameters for both frictions are statistically significant, the fit of the model is almost as close with labor adjustment costs alone, including matching trade moments. The adjustment costs are larger for the state owned enterprises and these plants are more patient, consistent with stories that SCE are able to borrow more easily than private enterprises. 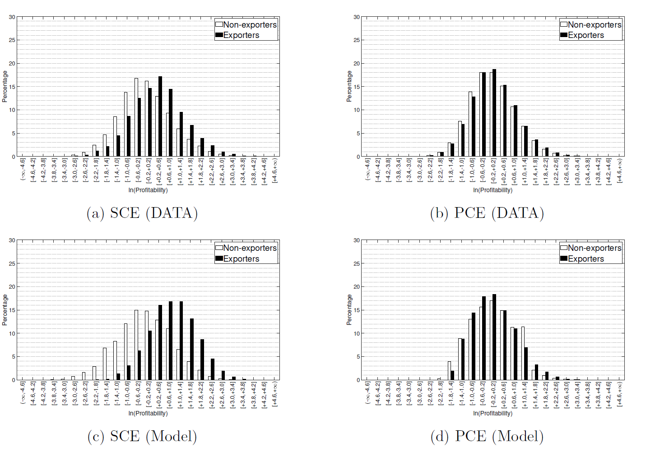 b. Who are the exporters?

Figure 2 shows the distributions of a revenue-based measure of profitability, by ownership and export status, in the model and the data. Though this measure is exogenous, in contrast to the average productivity of labor, there is still considerable overlap in the exporter and non-exporter distributions.

The analysis determines the factors that generate this overlap. Figure 3 shows the distributions of a revenue-based measure of profitability, by ownership and export status, in the model under three counterfactual experiments: removing adjustment costs, only technology shocks and removing the sunk cost.

For both ownership groups, removing the labor adjustment costs implies that sorting is much closer to the basic theory prediction, with little overlap in the profitability distribution by export status. The adjustment costs impact selection since a plant with high productivity but few workers, cannot quickly expand and begin to export. In this way, these costs substitute for sunk export costs.

The sorting is not as clean in the absence of demand shocks though again the exporters are surely among the highest plants in terms of profitability. From the bottom row of Figure 3, removing the sunk costs results in almost no change in the overlap in both cases. 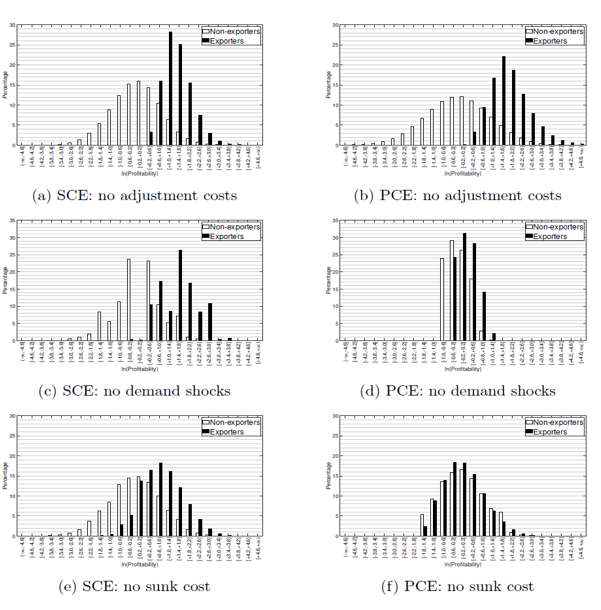 Note 2: Our motivation is similar to that of Bernard, Eaton, Jensen, and Kortum (2003), but our approach is quite different.

Note 4: More details about this measure, the estimation and the counterfactuals are reported in our working paper, Cooper, Gong, Hu and Yan (2020).

Note 5: Revenue-based productivity is defined as a measure of profitability, containing both technology and demand shocks, as this summarizes the return to employment and exporting.