We use a new case-level dataset to document a set of stylized facts on bankruptcy in China and study how the introduction of specialized courts across Chinese cities affected insolvency resolution and the local economy. We find that specialized courts hire better-trained judges and are 35% faster at dealing with bankruptcy cases than civil courts within the same city. We also find evidence that their introduction benefited the local economy by fostering firm entry, increasing average capital productivity, and favoring the reallocation of employment out of “zombie” firm–intensive sectors. 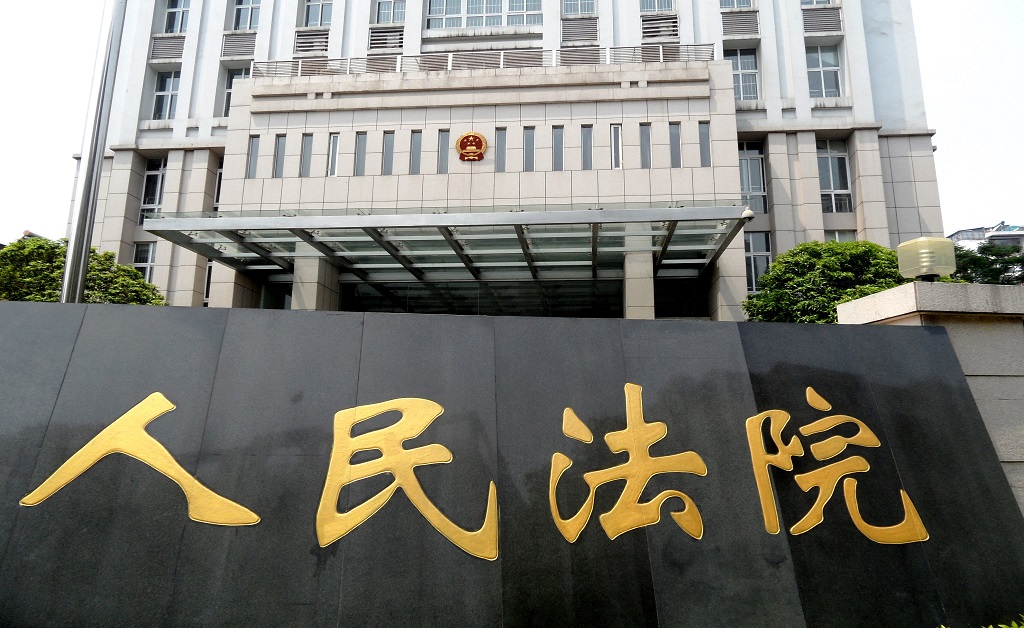 The lack of an efficient and independent judicial system is a major obstacle to economic development. Several studies have shown that, especially in developing countries, courts are often slow at processing cases, lack specialized judges, and are subject to political interference (Djankov, Hart, McLiesh, and Shleifer, 2008; Dakolias, 1999; Rodriguez and Ehrichs, 2007). The effects of these frictions in contract enforcement can percolate through the financial system in the form of high interest rates and limited access to credit. These, in turn, affect firms’ ability to invest and innovate, and hinder the reallocation of capital towards more productive projects.

This issue is prominent in China, where local courts are traditionally slow and suffer from the interference of local politicians when dealing with bankruptcy cases (Fan, Huang, and Zhu, 2013; Henderson, 2007). Local politicians have strong incentives to keep in operation low-productivity and financially distressed state-owned firms, in order to contain unemployment, avoid social unrest, and promote their political careers. Despite its importance, we still know very little about how the judicial system deals with insolvency resolution in China and what are its effects on the real economy.

In a recent working paper, we collect new case-level data to shed light on how bankruptcy works in China (Li and Ponticelli, 2020). How the second largest economy in the world deals with corporate insolvency has important policy implications, especially in light of the recent increase in corporate defaults that followed a decade-long debt boom. Nevertheless, this question has been largely unexplored so far due to a lack of data.

To make progress on this front, we collect detailed information on 2,021 bankruptcy cases filed in China between 2011 and 2019. Our data source is a new online platform created by the Chinese Supreme Court that allows debtors and creditors to monitor the evolution of bankruptcy cases. The platform provides access to a digitized version of the court documents accompanying each case, from which we extract a large set of case and firm characteristics.

Figure 1: Number of bankruptcy cases by year, type of case, and sector 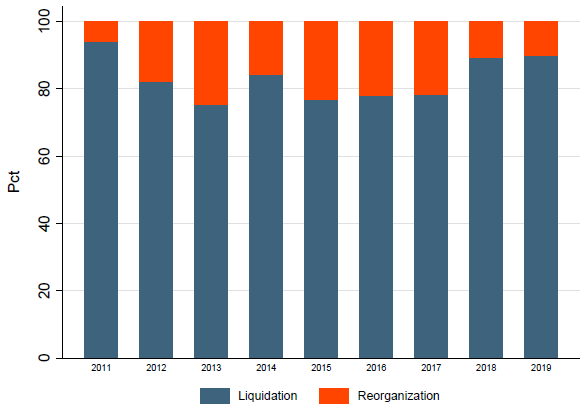 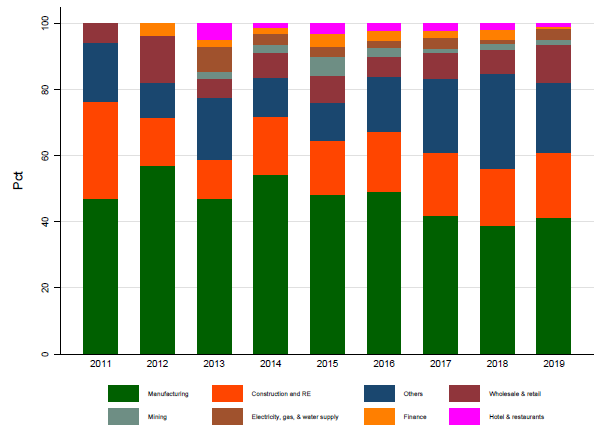 This new data allow us to uncover a set of stylized facts on bankruptcy in China. Similar to other emerging economies, the vast majority of Chinese bankruptcies are liquidations (77%). Over half of the cases in our sample involve firms operating in manufacturing, construction, and real estate. Liquidation cases are mostly initiated by unsecured creditors, while banks—whose claims tend to be secured by some form of collateral—initiate only 7.5% of cases. The average duration of bankruptcy cases we observe in the data is 1.6 years, around 60% longer than the average duration observed in the US during the same period according to World Bank data (see Note 1). However, as can be seen in Figure 2, there is large variation in case duration, which spans from a few months to around eight years. Reorganizations and cases involving small firms tend to be closed faster than liquidations and cases involving large firms respectively. 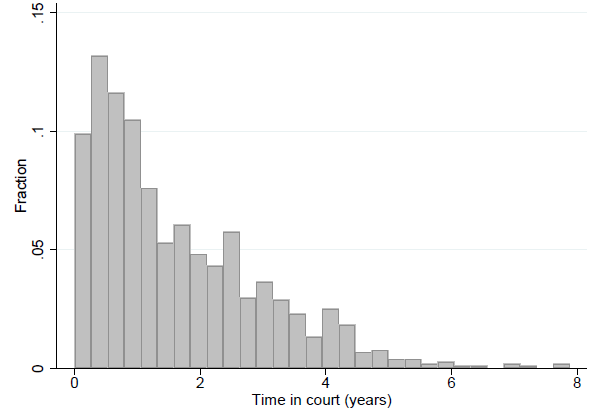 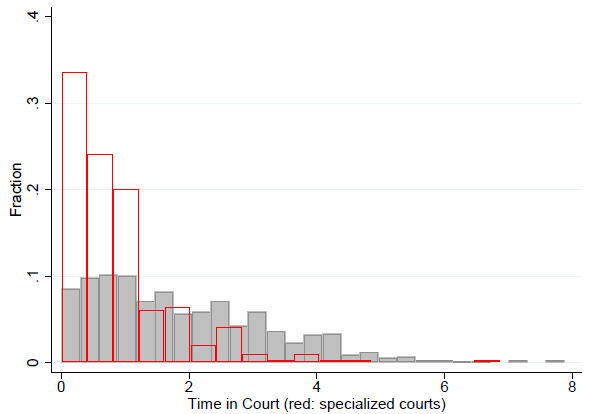 Notes: The figure shows the distribution of the variable “time in court,” which captures the duration of each case in years. Panel (a) pools all closed cases in our sample. Panel (b) differentiates between cases initiated in traditional civil courts versus specialized courts.

The effects of introducing specialized courts on insolvency resolution

Our paper also provides a first attempt to estimate the effects of introducing specialized courts. As in many other emerging economies, until recently, the Chinese judicial system did not have courts specialized in bankruptcy cases. Despite being more time-consuming and complex than the average civil case, bankruptcy cases were filed in local civil courts, which lack specialized judges and tend to operate under the oversight of local party officials. Between 2007 and 2017, in an attempt to increase the legal protection of creditors, China introduced 97 specialized bankruptcy courts in different cities. Compared to traditional civil courts, specialized courts are run by better- trained judges and are part of an effort by the central government to limit local governments’ interventions in bankruptcy cases (INSOL, 2018). Thus, it is possible to exploit the introduction of specialized courts as a shock to judicial efficiency and independence.

Figure 3: Allocation of cases in traditional vs. specialized courts 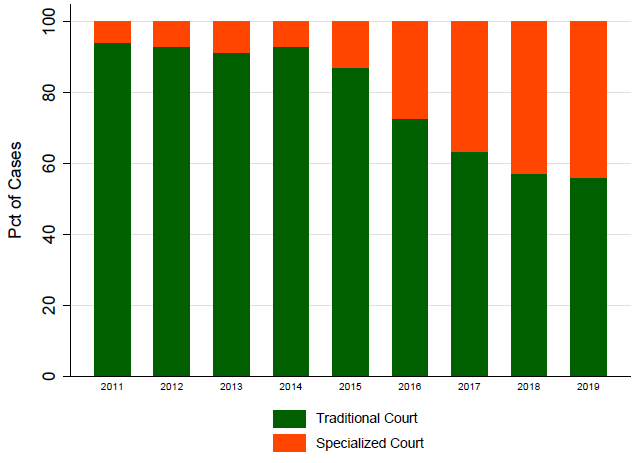 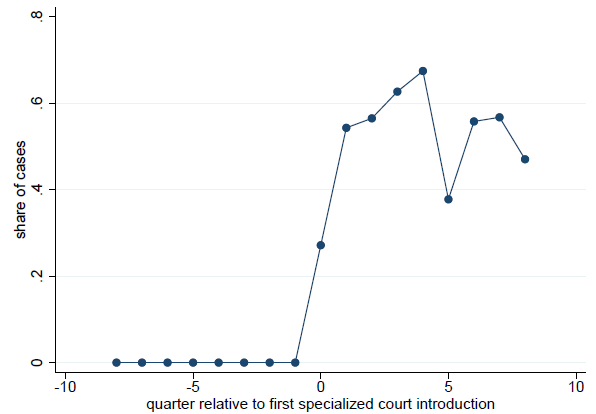 How do faster and more independent courts affect the real economy

What effects do these specialized courts have on the local economy? By exploiting the staggered introduction of courts across cities, we study their effect on several measures of local economic development (see Note 3). A more efficient and independent bankruptcy system can promote local economic development in several ways. First, by facilitating the liquidation of low-productivity firms and favoring a quicker reallocation of their real assets, their labor force and their market shares to other firms in the economy (Bernstein et al. 2019). Second, by increasing the expected recovery rate of creditors and thus promoting lending to firms that operate under specialized courts (Visaria, 2009).

We focus on three indicators of local economic performance that are available in our data: entry of new firms, average firm productivity, and the share of local labor employed in industries with a higher concentration of “zombie” firms. We define zombie firms as low-productivity firms benefiting from financing conditions that are not justified by their fundamentals (following Caballero et al., 2009). Using data on publicly listed firms, we rank industries based on the concentration of zombie firms. We define industries above the median of this measure as zombie-intensive industries, or Z-industries.

We find that cities that introduced specialized bankruptcy courts experienced a 3 percent faster increase in the number of firms and a 4.5 percent larger increase in average product of capital of local firms relative to cities where insolvency is still resolved exclusively by civil courts. We also find that cities that introduced specialized courts experienced a 1.7 percentage points larger decline in the share of labor employed in zombie-intensive industries.

Increasing pressure on the institutions in charge of resolving insolvency

In the last decade, the Chinese economy experienced a massive increase in corporate debt. Several factors have contributed to this debt boom, including the stimulus policies of 2009–2010, the development of a corporate bond market, and the fast growth of shadow banking. Academics and policy makers have raised concerns about the risks associated with this credit boom. In addition, the Chinese central government expressed concerns about the large number of “zombie” firms and recognized the lack of efficient bankruptcy procedures to facilitate their liquidation or restructuring. Finally, the COVID-19 crisis will likely amplify the number of bankruptcy filings in the coming months and years.

Despite the increasing pressure on the Chinese insolvency resolution system, there has been, until now, virtually no academic research on how bankruptcy works in China. We believe that our paper can contribute to close this gap in the literature and inform policy makers. More research is necessary in this field, both on the functioning of the judicial system and on its effects on credit markets and the real economy.

Note 2: Of course, even within a given city and year, cases are not randomly allocated across courts. However, we show that cases handled by traditional versus specialized courts within the same city and year are strongly balanced along both firm and case characteristics.

Note 3: This analysis exploits city-level variation, which does not allow us to exploit variation across courts facing the same city-level shocks. Thus, we rely solely on the staggered introduction of specialized courts across cities as a source of identification. To attenuate the concerns associated with the endogenous opening of specialized courts, we estimate a discrete time hazard model that studies whether differences in economic trends at the city level predict the timing of the introduction of specialized courts across cities. We find that the timing of their introduction is uncorrelated with different measures of local economic performance as captured by contemporaneous and lagged changes in GDP per capita, number of firms, average firm size, and share of manufacturing in local GDP.