Can Investment Incentives Crowd Out Innovation? Evidence from China

The Chinese government has been using strong fiscal stimuli to encourage investment. While these fiscal policies, such as investment tax credits, often encourage firm investment, we find that investment tax incentives may generate an unintended reduction of firms’ innovation. Moreover, the crowding-out effect is non-monotonic in the level of financial constraints. 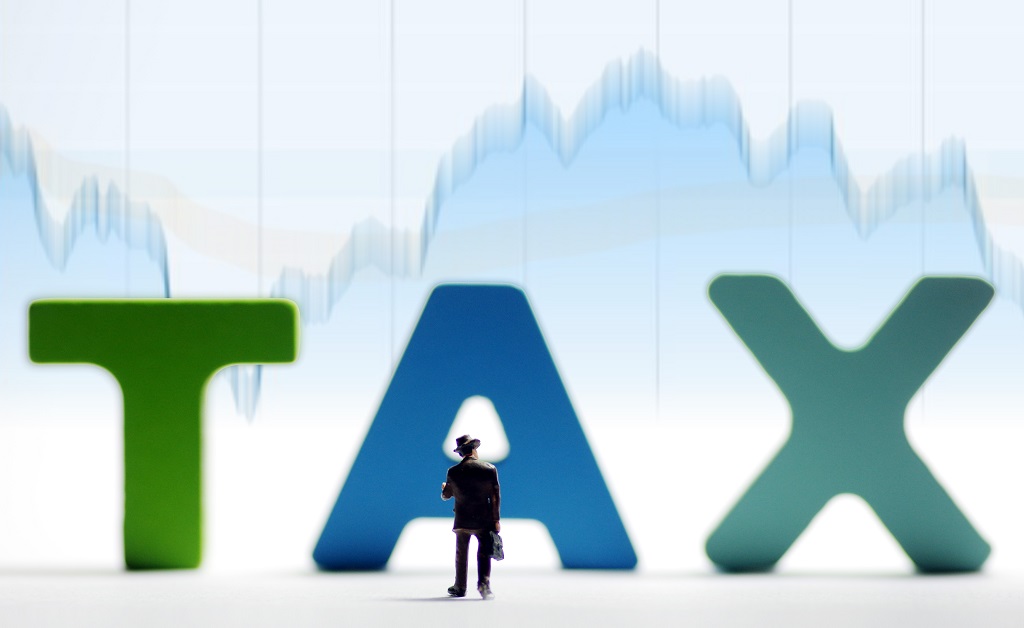 Over the last twenty years, China has experienced rapid economic growth. Many people attribute this to China’s large amounts of investment; and indeed, the Chinese government has been using strong fiscal stimuli to encourage investment. One important encouragement is the value-added tax (VAT) reform in the 2000s. This reform was introduced to avoid double taxation under the previous tax policy and to mitigate firms’ tax burden. It was intended to encourage firm investment in fixed assets, especially in machines and equipment. Several studies, including Zhang, Chen, and He (2018), Liu and Mao (2019), and Cai and Harrison (forthcoming), have found that the VAT reforms increase eligible firms’ fixed investment, capital-intensity, and R&D expenditure per employee, and reduce their total employment.

Ke et al. (2019) document a crowding-out effect of the 2004 VAT reform — investment tax incentives may generate an unintended reduction of firms’ innovation. Moreover, the effect is non-monotonic in the firms’ level of financial constraints. It is well-documented that firms’ innovation has a positive externality on the productivity of other firms, and hence on economic growth, through technology spillovers [see, for example, Romer (1986), Griliches (1991), Jones and Williams (1998), and Bloom, Schankerman, and Reenen (2013)]. Therefore, the crowding-out effect on firms’ innovation may lead to a negative externality on economic growth that firms do not internalize as they maximize profits.

How Does the VAT Reform Affect Firms with Different Financial Constraints?

We analyze the effects of investment tax credits in a simple model in which firms have heterogeneous production technologies and financial constraints and they may choose to upgrade their technologies; however, advanced technologies are associated with additional operating costs. The VAT reform reduces the costs of machines and equipment, and makes upgrading to the capital-intensive advanced technology more appealing. Nonetheless, not all firms prefer to upgrade. Firms with tight financial constraints will not find upgrading beneficial, since the additional costs associated with advanced technologies leave them insufficient funds for production. Firms with loose financial constraints can afford advanced technologies regardless of whether there is any cost reduction from the reform. In contrast, firms with intermediate-level financial constraints will take advantage of the reform to upgrade. To afford the additional costs, however, innovation will be crowded out. Note that while firms want to reduce innovation to maximize profits, reducing innovation will have a negative externality on economic growth that firms do not take into consideration. In addition to this non-monotonic crowding-out effect on innovation, our theoretical analysis also provides predictions about how the VAT reform affects fixed asset expenditures and labor costs and offers a unified explanation for previous empirical studies including, but not limited to, Liu and Lu (2015), Zhang, Chen, and He (2018), Liu and Mao (2019), and Cai and Harrison (forthcoming).

Using the number of patents granted to firms as the primary measure of innovation activities and the sample covering 2001–2007, we find that the VAT reform has a significant negative effect on firms’ innovation. Column (1) in Table 1 shows the coefficient of the triple interaction term is -0.0082 and is statistically significant at the 5 percent level. Compared with other provinces, the difference between the before–after growth rate for patents developed by firms in targeted industries and that in non-targeted industries in the northeastern provinces is 9.51 percent lower (see Note 2 for more details). This result is robust across different regression specifications in Columns (2) to (4). 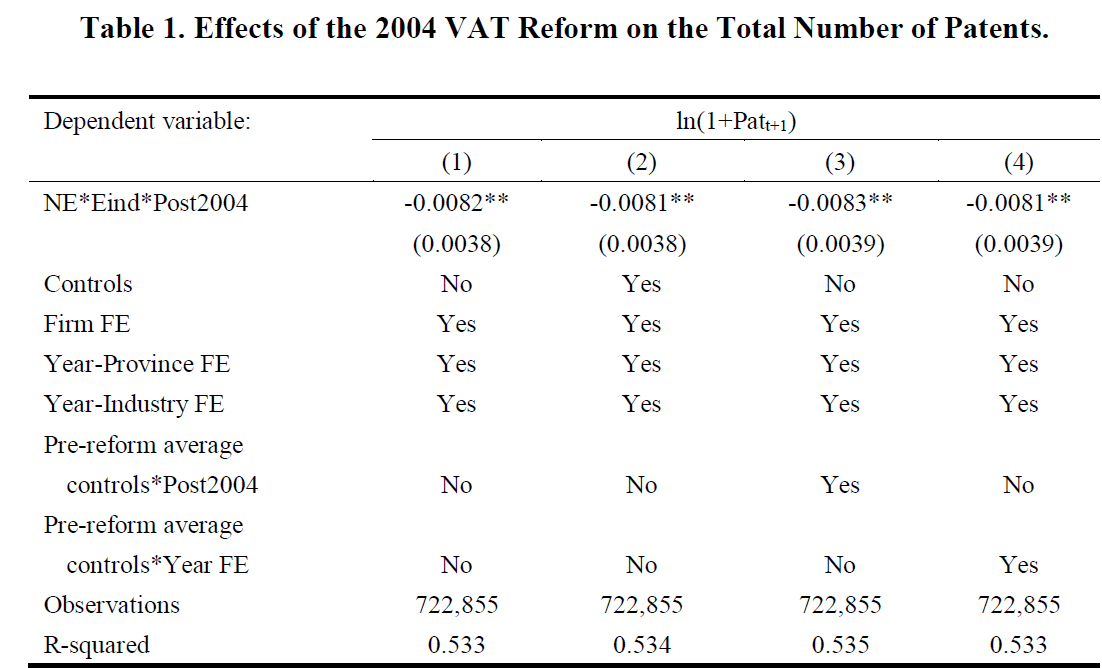 This table provides evidence on the effect of the 2004 VAT reform on the total number of patents applied for by a firm in year t+1 and eventually successfully granted [ln(1+Patt+1)]. NE is an indicator equal to one for the three provinces in the northeastern part of China and zero otherwise. Eind is an indicator equal to one for those six industries targeted by the reform and zero otherwise. Post2004 is also an indicator, which is equal to one for the years 2005–2007 and zero for years 2001–2004. Column (1) estimates the basic impact of the 2004 VAT reform on firm innovation. Column (2) controls for a set of firm-level time-variant variables including the logarithm of total assets, firm’s age, the return on the assets ratio defined as operating income divided by the book value of total assets, the proportion of capital owned by the foreign sector, and the proportion of capital owned by the state. The average values of these controls in Columns (3) and (4) are calculated across all firms in the pre-reform period. Column (3) interacts the Post2004 dummy with the pre-reform average controls. Column (4) fully controls for the interactions between year dummies and the pre-reform average controls. Standard errors clustered at the firm-level are in parentheses.

We investigate the heterogeneous effects of the VAT reform in terms of firms’ financial constraints. We follow Hadlock and Pierce (2010) to construct the size-and-age (SA) index to measure the extent to which each firm is financially constrained. A firm with a higher SA index is financially more constrained. Although originally estimated based on data for U.S. firms, it has been argued that the SA index is a good proxy for firms’ level of financial constraints in various contexts [see Hadlock and Pierce (2010) and Berkowitz, Lin, and Ma (2015)]. Previous research also confirms that both smaller firms and younger firms face tighter financial constraints in China, suggesting that the SA index can continue to be a reasonable proxy in China [see Cull and Xu (2005) and Liu and Mao (2019)]. In addition, we verify that our findings are robust under alternative proxies such as firm size and the cash flow ratio, which have been used in Liu and Mao (2019). 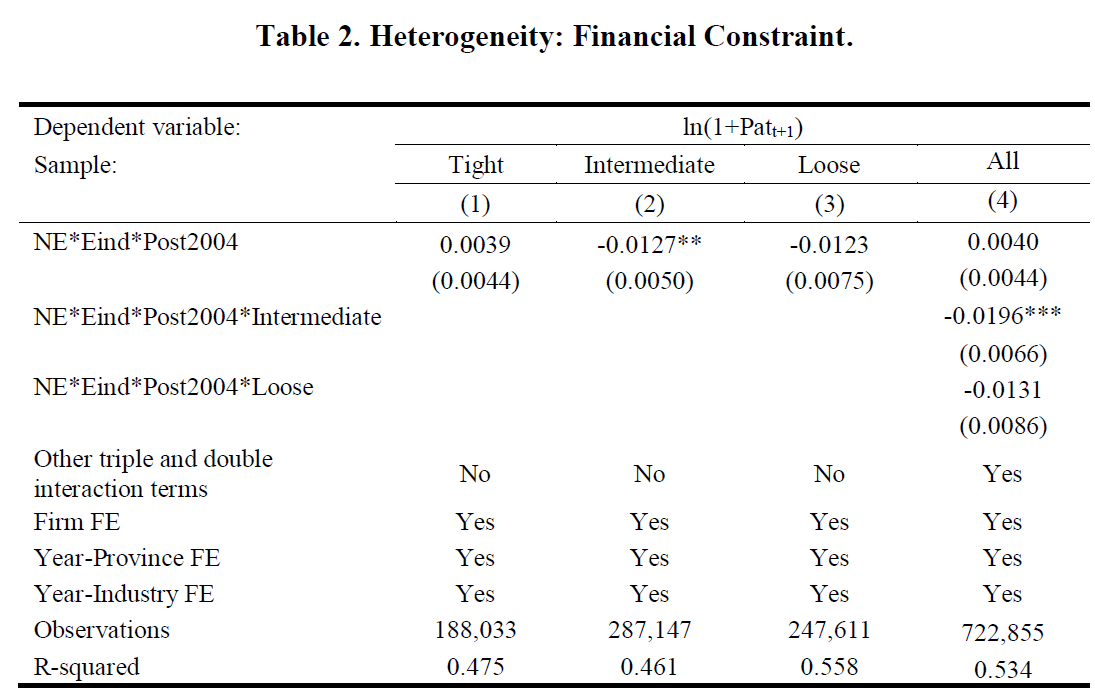 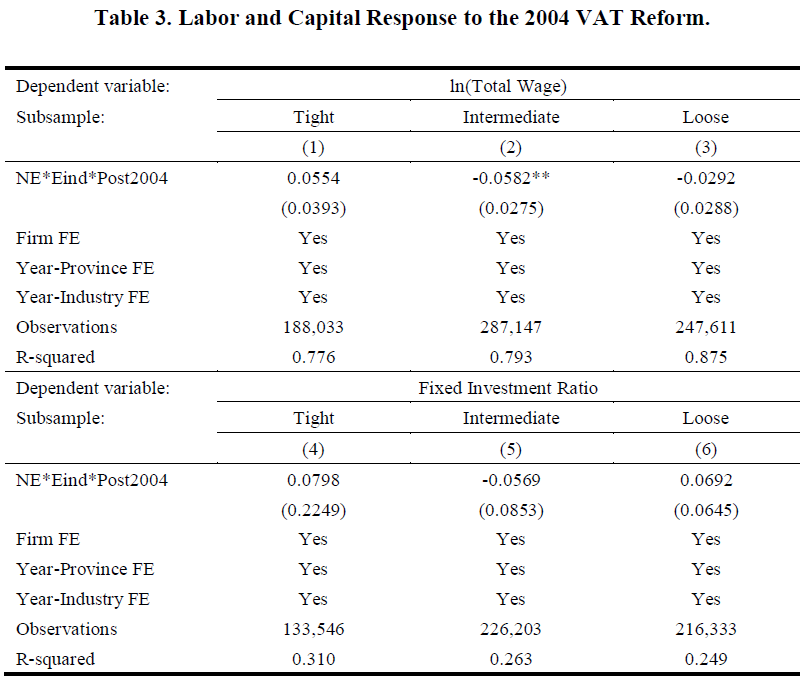 This table provides evidence on the heterogeneous effects of the 2004 VAT reform on firm-level labor costs and the fixed investment rate in terms of financial constraints proxied by the SA index. The dependent variables are the log value of total wage (in 1998 Renminbi) in Columns (1)–(3) and the gross fixed asset investment in a given year normalized by the lagged net fixed asset stock are in Columns (4)–(6). The three subsamples with different levels of financial constraints are constructed as in Table 2. Robust standard errors clustered at the firm-level are reported in parentheses.

Note 1: We conduct other robustness checks to confirm the validity of our identification: (1) We use the propensity score matched sample to eliminate major differences between affected and unaffected ?rms and re-estimate the effects; (2) We conduct permutation tests to show that our results are not driven by random factors; (3) We verify that firms cannot predict a policy and change their behavior in advance; and (4) We show that neither trans-province production nor firm entries/exits drives our main results.

, and x represents the interaction among