Do Interest Rates Play a Major Role in Monetary Policy Transmission in China?

In light of this situation, in a recent paper (Kamber and Mohanty, 2018), we explore the role of interest rates for monetary policy transmission in China considering its multiple instrument setting. In doing so, we exploit information from high-frequency Chinese financial market data to identify monetary policy shocks and assess their macroeconomic effects. In contrast to the approach followed in previous studies, our strategy does not require an assumption about the PBC's reaction function. Instead, we assume that while financial market participants do not have full information about the PBC's true reaction function, they can reasonably anticipate changes in its main policy instruments conditional on the state of the economy and price them in interest rates. The high-frequency financial market information then enables us to separate the “surprise” component of monetary policy from the “expected" component, which we use subsequently to identify monetary policy shocks.

Our first contribution is to construct a time series of monetary policy surprises using daily changes in interest rates during short windows around policy decisions and communications by the PBC. Specifically, we focus on movements in one-year interest rate swap (IRS) contracts based on the interbank 7-day repo rate to measure market expectations of monetary policy. The 7-day repo rate is not only considered very informative with respect to the monetary policy stance of the PBC, but it is also the most liquid among all types of IRS contracts. To account for China’s multiple-instrument setting, we compute daily changes in IRS contracts on days when lending rates and reserve requirements are changed, when quarterly monetary policy reports are published, or when there are major changes in the exchange rate regime.

Graph 1 plots an example of our procedure and the resulting surprise measure. On 26 November 2008, the PBC lowered both lending and deposit rates by around 100 basis points and relaxed the reserve Requirement Ratio (RRR) from 17% to 16% for large banks and from 16% to 14% for small banks. Graph 1 depicts the evolution of one-year 7-day repo interest rate swaps (IRS) before and after the announcement. The IRS was stable at around 1.9% before the announcement but fell sharply to 1.35% the day after the announcement. Therefore, our estimate for the monetary policy surprise for this announcement, which involved multiple policy instruments, is 55 basis points. Considering the days on which multiple instruments have been adjusted, we repeat the same procedure for 107 announcements covering the period of 2006–2016 to construct a time series of monetary policy surprises.

Note: The figure plots the evolution of one-year 7-day repo interest rate swaps before and after the monetary policy announcements on 26 November 2008. 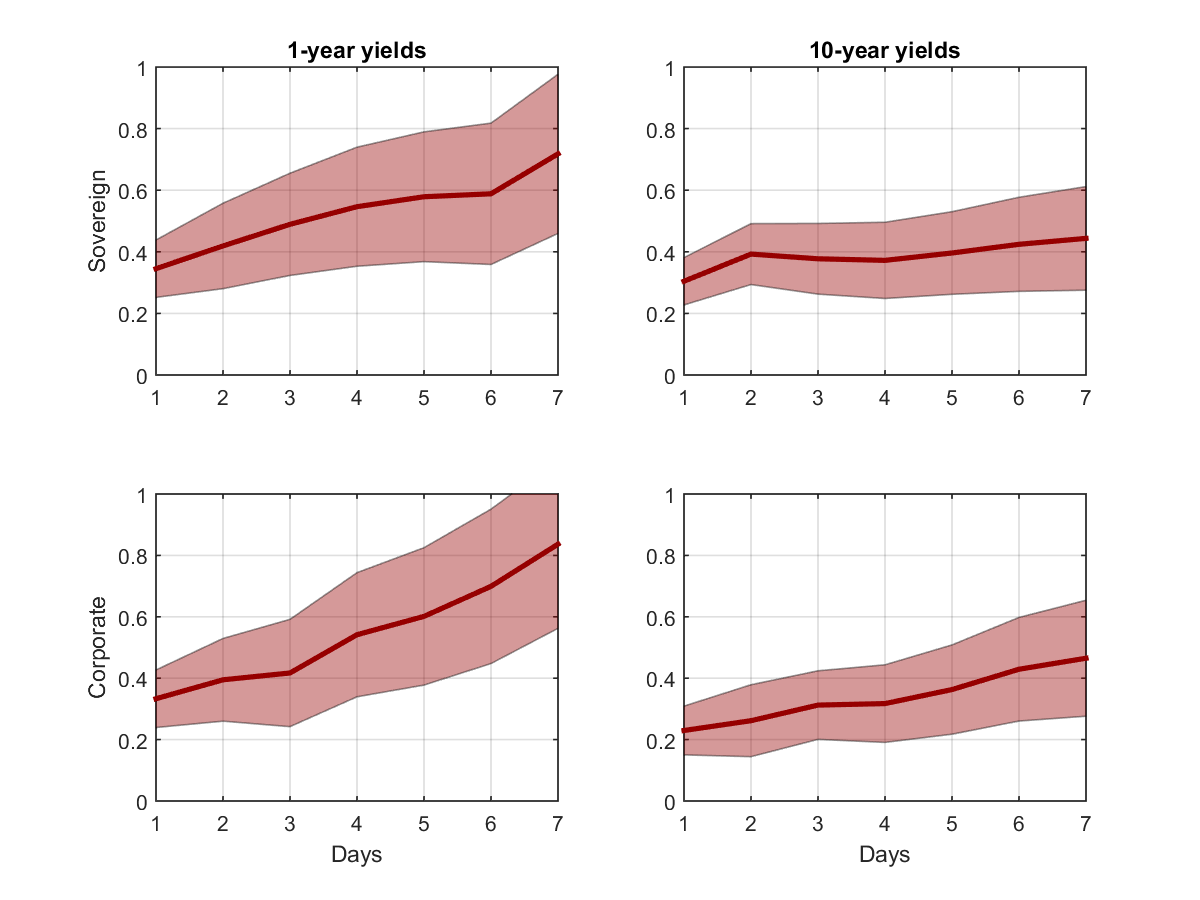 Note: The figure presents the impact of monetary policy surprises on sovereign and corporate yields at various maturities. Each panel depicts the response of a particular yield over the following 7 days. The solid red lines are coefficient estimates and the shaded areas represent 90% confidence intervals. See Kamber and Mohanty (2018) for details.

To gain further insights into monetary transmission channels in China, Graph 3 also reports the effects of monetary policy on corporate spreads and loan growth. In a world without any financial frictions, a monetary policy shock would result in a proportional increase in government bond rates and the rates on any private security of the same maturity leaving the spread between the two unchanged. However, in the presence of financial frictions, monetary policy could operate via a “credit channel,” implying fluctuations in the spread between yields on private securities and government bonds. In China, this amplification mechanism is likely to be strengthened by the fact that a large share of firms are either excluded from domestic bond markets or have only limited access to such finance. In addition, a significant share of Chinese firms have currency and maturity mismatches on their balance sheet, which can further constrain their ability to access external finance in the midst of a tightening monetary policy cycle. Indeed, we find that although relatively short-lived, corporate spreads increase substantially around 20 basis points, suggesting the existence of a credit channel in the monetary transmission mechanism in China. Finally, we examine the argument often made in the context of China that the presence of directed credit measures (“window guidance”) reduces the power of the conventional interest rate channel in exerting a meaningful impact on aggregate bank lending. However, we find that loan volumes decrease significantly by about 1% following a monetary tightening, suggesting that the use of window guidance and implicit credit quotas by the Chinese authorities to directly control bank credit does not necessarily imply that bank credit is insensitive to interest rates. 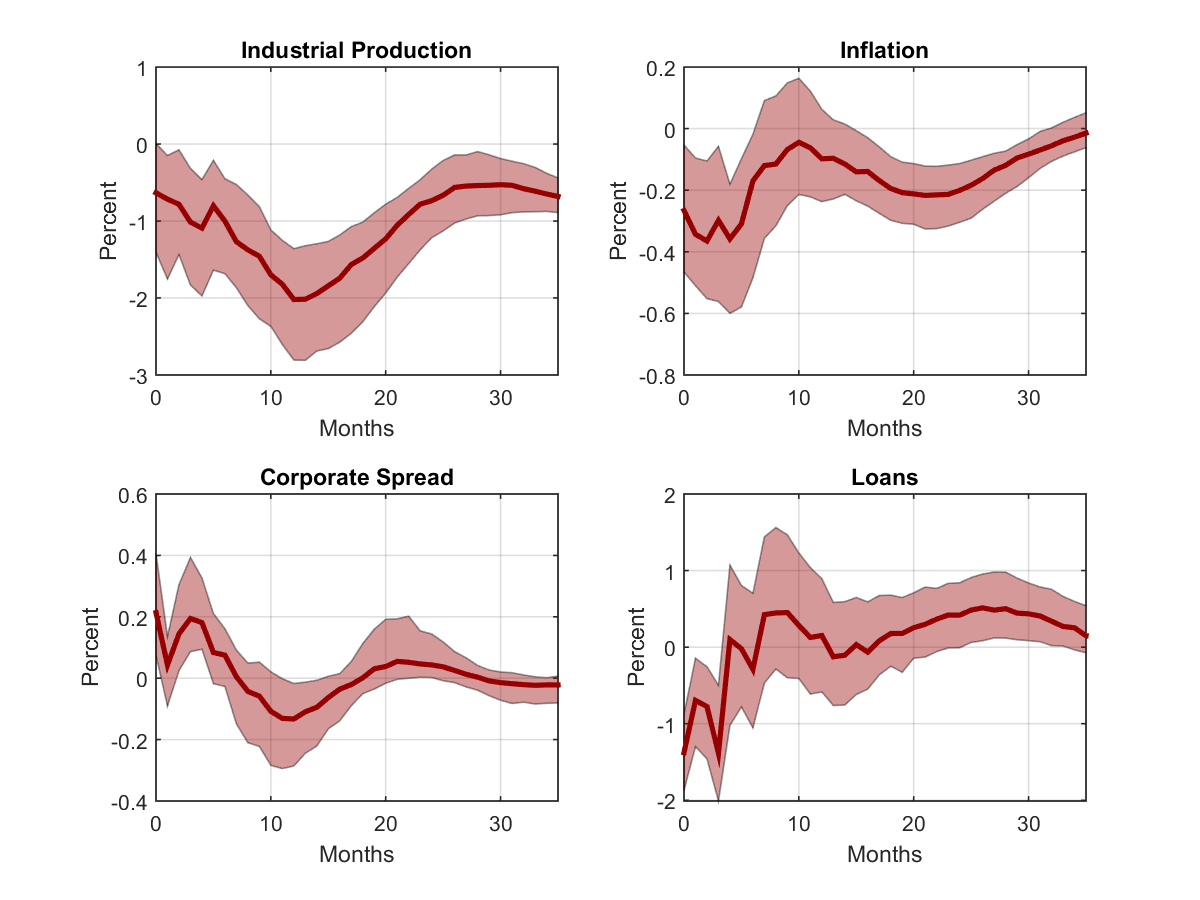 Note: The figure presents the responses of selected economic indicators to a monetary policy shock that raises the Reserve Requirement Ratio by 1% obtained from a structural VAR. The solid lines are point estimates and shaded areas represent 68% confidence intervals. See Kamber and Mohanty (2018) for details.