Pushing on a String: State-Owned Enterprises and Monetary Policy Transmission in China

In China, a large share of enterprises is state-owned and has preferential access to finances. This should affect the way the economy responds to changes in monetary policy. We find that a policy easing is more effective than a policy tightening – which is consistent with the PBC being able to “push on a string”.

It is often argued that monetary policy is unable to “push on a string”. By using this metaphor, market participants and central bank observers describe the notion that tighter monetary policy can pull the economy into a recession when financing constraints are binding. Easier monetary conditions, however, can only relax financial constraints but cannot push the economy into an expansion. The available empirical evidence for the U.S. supports this notion (Tenreyro and Thwaites, 2016). As a result, tightening shocks should have larger effects on the real economy than easing shocks.

We (Chen, Li and Tillmann, 2018) study whether a “pushing on a string” phenomenon can be found for China. The case of China is particularly interesting because of the out-sized role of state-owned enterprises (SOEs). SOEs are typically clustered in heavy industries such as steel and shipbuilding and, even after decades of economic reforms, account for about 40% of total firm assets. The literature finds two main properties of SOEs compared to private firms: First, SOEs are characterized by an inefficient allocation of capital compared to private firms. They make larger losses and incur greater debt. Second, despite their structural weaknesses, they have preferential access to finances, often channeled through state-owned banks.  In fact, the combination of these two properties is one of the stylized facts of SOEs and is often used as a core assumption in macroeconomic models for the Chinese economy (e.g. Song et al. 2011).

If SOEs are subject to governmental interference and face preferential access to financial resources, then they should respond differently to monetary policy impulses than privately owned firms do. In addition, the large SOE sector also should alter the way monetary policy affects the aggregate real economy. We study the transmission of policy shocks using disaggregated data for SOEs and private firms, respectively.

Our main hypothesis is that the presence of SOEs gives rise to an asymmetric adjustment to monetary policy shocks. Suppose SOEs are indeed characterized by (i) government interference into their operations and (ii) preferential access to finances. If the financing constraint is binding, a policy tightening should make access to refinancing through markets and private banks more expensive for both SOEs and private firms. However, since SOEs enjoy other, more stable sources of funding, their activities need to shrink less. Now consider a policy easing. Through a relaxation of financing constraints, private firms cannot be forced to expand. This is the source of the inability to push on a string in other economies. However, through their interference into the management of SOEs, authorities can impel a stronger expansion in the SOE sector. As a result, SOE activity should expand more strongly than the economic activity of private firms.

How does this translate to the aggregate level? Since SOEs are a large part of the economy, this should translate into an asymmetry on the aggregate level. In fact, this should imply that easing shocks are more effective in driving GDP than tightening shocks – a pattern that is the opposite of what researchers found for the U.S. and other economies. In this sense, monetary policy in China is “pushing on a string”.

We resort to local projections (Jordà, 2005), a time series method often used to quantify the response of macroeconomic variables to shocks, in which we estimate the differential responses of key economic aggregates to a monetary policy easing and tightening, respectively. Local projections are a very flexible tool to account for all kinds of asymmetric responses. Our primary measure of monetary policy is a series of identified policy shocks from Chen, Higgins, Waggoner and Zha (2016) and Chen, Ren and Zha (2017). This measure reflects the exogenous change in M2, that is, the change in money supply that is not driven by changes in the business cycles. In this sense, it is an unexpected “shock.” Chen, Ren and Zha (2017) show that this shock measure encompasses the effects of most instruments used by the PBC to implement monetary policy, such as changes in required reserve ratios or changes in interest rates.

A policy easing strongly raises value added, investment, and leverage in the state-owned sector (Figure 1). A policy tightening, however, does not lead to a significant adjustment in the state-owned sector. Only for the response of leverage of state-owned firms do we find a policy tightening to be effective. Moreover, the magnitude of the responses differs vastly across sectors. The accommodative shock that raises investment and leverage growth of SOEs by 7.5 and 1 percentage points, respectively, increases private investment and leverage by only 2.5 and 0.5 percentage points. 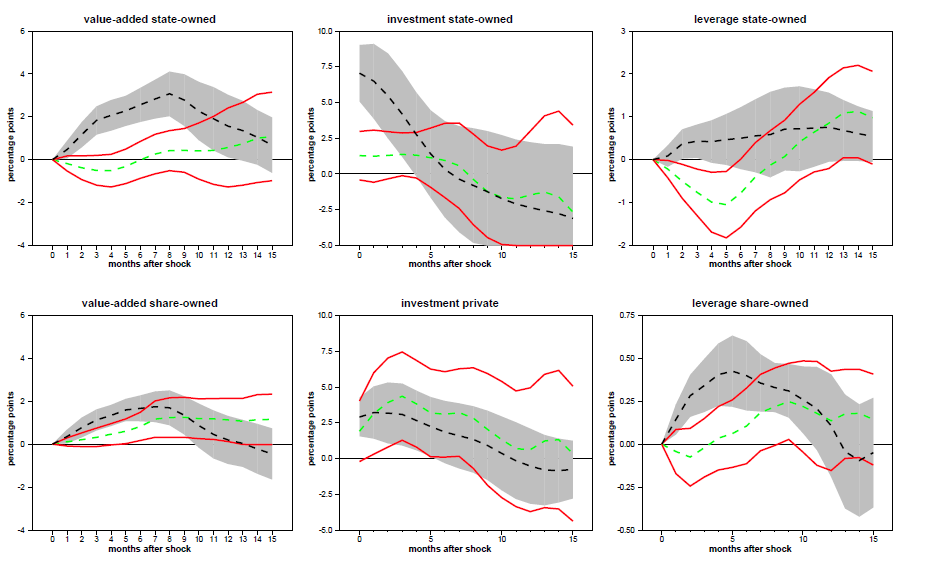 
Figure 2 presents the resulting impulse response functions for an alternative measure of aggregate real economic activity. Since data on real GDP for China are notoriously questioned on grounds of reliability, we also use three widely used alternative indictors of economic activity, which are the growth rate of electricity consumption, the growth rate of cargo freight, and the percentage change in sold office space. We find that an easing shock significantly raises GDP as well as the alternative indicators of activity, such as electricity consumption, floor space sold, and fright volume. A contractionary shock, by contrast, has barely any effect. Hence, real activity exhibits a strong asymmetry in response to policy shocks. 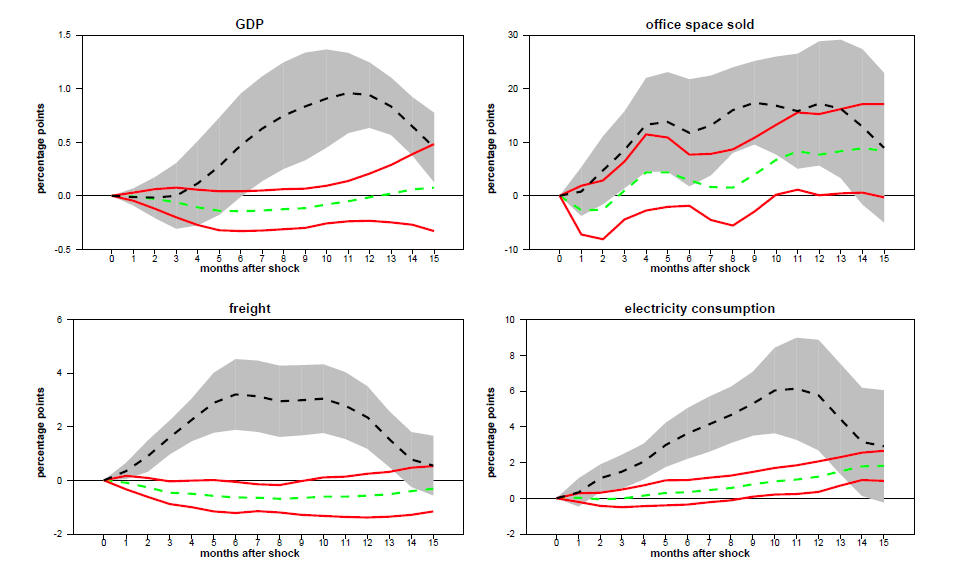 Overall, we find that easing shocks have stronger effects on SOEs than tightening shocks. This translates into an asymmetric response of Chinese GDP and other measures of real activity. Thus, in contrast to other advanced economies, monetary policy is able to “push on a string” and is more effective when it provides additional stimulus compared with a situation in which policy tightens.

The results indirectly provide information about the role of state-owned enterprises and the corresponding scale of their preferential access to financing. The large share of state-owned enterprises and, hence, the implied asymmetry in the transmission of Chinese monetary policy, might make empirical estimates about the transmission process less comparable with that of other advanced economies.