Bilateral Trade and Shocks in Political Relations: Evidence from China

To what extent do political relations between countries affect their economic exchange? Using evidence of China’s relations with other major powers during the period of 1990 to 2013, Yingxin Du, Jiandong Ju, Carlos D. Ramirez, and Xi Yao point out the time-aggregation bias in the existing empirical research and provide insights on the relationship between political shocks and trade.

This type of problem is known as the “temporal aggregation” or sampling bias in the time series literature (Granger, 1966, 1969; Marcellino, 1999; Wei, 1982; Breitung and Swanson, 2002; Taylor, 2001; etc.). Researchers found that aggregation (or even averaging) modifies the time series properties of the data at every frequency, removing particular characteristics of the underlying series while simultaneously introducing others. When the important dynamics of political relations that take place within the aggregated intervals are omitted or “smoothed out,” the effect of these high-frequency and short-lived cycles will not be reflected in the estimating results and the estimate will tend to be biased as well (See Note 1).

Dynamics of China’s political relations with other countries

A comprehensive data set measuring China’s political relations with other major powers and some neighboring countries (See Note 2) at the monthly frequency permits our argument to be empirically tested. The data set is constructed by one of China’s leading scholars on international relations, Xuetong Yan and his colleagues (Yan et al, 2010; Yan and Qi, 2009) (See Note 3). We estimate time-series models for the index of political relations between China and countries in this data set for the period of 1990 to 2013. The empirical results show that the natural cycle of the political dynamics in this period tend to be relatively short and high-frequency (See Note 4). After the Cold War, most variability in political relations does not involve the extreme outcome of war. In most cases, foreign relations of China and of many other countries fluctuate along a continuum that ranges from “friendly” to “normal” to “tense,” and occasionally, “threatening” (Davis and Meunier, 2011; Yan et al., 2010). As a result, these political “shocks” tend to be relatively short-lived—coming and going in a matter of months, if not weeks.

The effect of shocks in political relations on bilateral trade

To study to what extent political relations affect trade, one natural way of correcting for the temporal or sampling bias discussed above is to use higher frequency data. We implement a vector auto-regression analysis in which the dynamics between trade and political relations are modeled. The impulse response function shows that following a one-standard-deviation adverse shock to the political relations index, export growth to China (from the partner country) tends to deteriorate in the first month following the shock for about half of the sample, and in month two for the remaining half. After the third month, the effect is essentially nil (Figure 1). No long-term effects are detected. Although political shocks influence exports to China, the effects largely vanish within two months.


Figure 1: Impulse response function of a PRI shock on exports to China from eight foreign countries 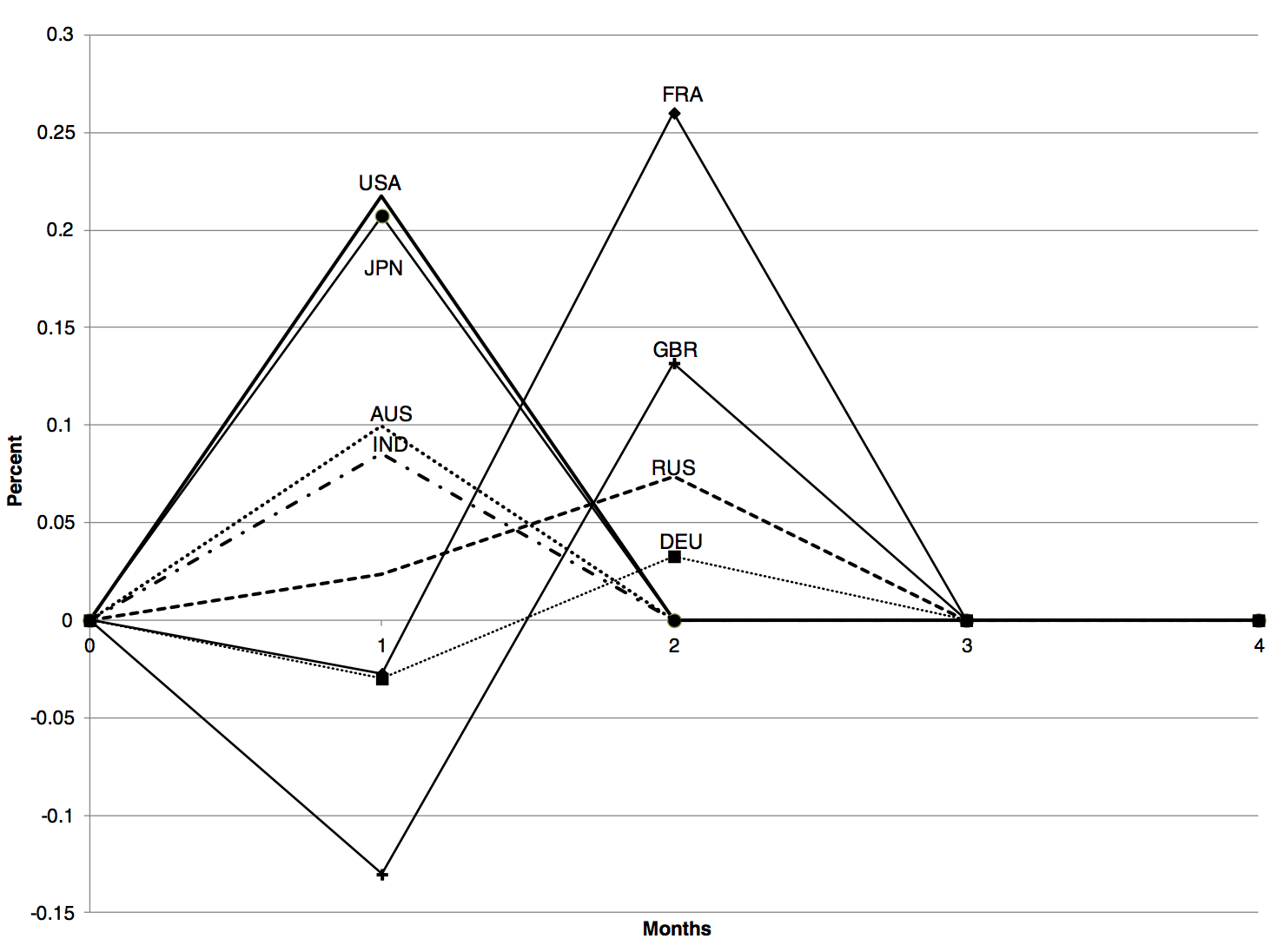 Note: For visual clarity, the displayed effects are those that are statistically significant at the 90% level or higher. In no case is the estimated effect significant at month 3 or onward.

Insights on political relations and trade

This finding provides us insights on how we think about political relations and trade. Bilateral trade is a long-term equilibrium determined by the size of the economies, technical efficiency, factor endowments of the trading countries, and similar factors, while unpredictable political shocks are short-term disturbances to the relation between the countries. In a game-theoretic setting, a combination of healthy trade and peaceful political relations can be identified as the “Pareto perfection” equilibrium (such that players will not have the incentive to deviate in any subgame of the equilibrium). When a political shock takes place, thereby threatening the Pareto-dominating equilibrium, players will have an incentive to settle any dispute and restore the superior allocation outcome. In this context, political shocks can be seen as “accidental” deviations from the equilibrium that are rapidly resolved through diplomatic exchanges.

Our empirical findings also substantiate the policy adopted by China for the past few decades. Since 1978, China has adopted a model of “taking economic development as the central task,” while pursuing “an independent foreign policy of peace, a path of peaceful development and a win-win strategy of opening up” (See Note 5). Political frictions between China and other countries will inevitably occur. Many countries regard the rise of China as a political threat. Yet China’s policy of prioritizing economic benefits and economic cooperation implies that China will prevent political disputes from escalating into military conflicts, which will allow  a return to a healthy trade and peaceful political relations equilibrium. In this regard, as the empirical findings show, China’s initiative to build a new type of international relations featured by win-win cooperation is not rhetoric but reality.

However, it is worth noting that these empirical findings can be specific to our sample period from 1990 to 2013. Since then, China has entered into a new period of openness, and the relationship between political relations and trade could be different. Political relations may have significant effects on trade in longer horizon in two cases. First, when a country prioritizes its political stance, it is likely that our results no longer hold. Second, existing research has shown that wars can have long-lasting effects on bilateral trade (Che et al., 2015). Therefore, in a period when political relations involve the extreme outcome of war (especially before the Cold War), the dynamics between political relations and trade are expected to have very different patterns. Documenting and modeling the changing dynamics in the new period would be an interesting topic for future research.

Note 1: Our paper provides a mathematical illustration to this bias. We assume that political relations and trade follow a monthly data generation process in the form of a vector-autoregressive model to derive the true process that the aggregated variables follow. The error term turns out to be correlated with the independent variable. As a result, estimating the equation using aggregated data will produce biased estimates.

Note 3: Specifically, a Box-Jenkins analysis reveals that the dynamics of PRI shocks can be modeled with low-order ARIMA processes. This low persistency suggests that political shocks are short-lived. Spectral density analysis shows that high-frequency cycles form an important portion of the dynamics of PRI shocks. This fact underscores the aliasing concern noted by Priestly (1981) —with temporally aggregated series it is not possible to detect important dynamics that are taking place within the aggregated intervals.

Note 4: Specifically, a Box-Jenkins analysis reveals that the dynamics of PRI shocks can be modeled with low-order ARIMA processes. This low persistency suggests that political shocks are short-lived. Spectral density analysis shows that high-frequency cycles form an important portion of the dynamics of PRI shocks. This fact underscores the aliasing concern noted by Priestly (1981) —with temporally aggregated series it is not possible to detect important dynamics that are taking place within the aggregated intervals.