Can Credit Still Prop Up the Chinese Economy?

Recent IMF research explores the effectiveness of credit in supporting the Chinese economy, and compares it with the effectiveness of fiscal stimulus. The study finds that credit contributed positively to output growth in China in the early 2000s, but the effect fell to almost zero post-2010. This suggests that, at present, credit cannot effectively support further growth of the Chinese economy. In contrast, the estimated fiscal multiplier is 1.4 post-2010, which is high in international and historic comparisons. Therefore, a targeted fiscal stimulus can cushion the adjustment of the Chinese economy to lower credit growth.

The Chinese Mainland is experiencing a major credit boom. As of end-2016, total social financing—a broad measure of credit—exceeded 200 percent of GDP. The credit-to-GDP gap—a measure of financial vulnerability—is the second highest among 44 economies covered by BIS (after Hong Kong SAR).

The credit boom raises two concerns. The first is the risk of financial busts and economic slowdown. The reversal of a credit boom is a known macroprudential risk (Dell’Ariccia et al., 2016). In the case of China, this risk may be amplified by the fact that rapid credit growth induced the expansion of a less-regulated shadow banking sector (Acharya et al., 2016; Chen et al., 2017B).

The second concern is declining credit efficiency due to credit abundance. Inefficient credit allocation in China has been well documented. Deng et al. (2015) present evidence of credit directed to real estate and land purchases, with little macroeconomic effect beyond higher real estate prices. Bai et al. (2016) and Cong et al. (2017) show that credit is often directed to inefficient SOEs and other government-affiliated entities, which are less productive than private firms. Hong (2017) and Huang et al. (2017) show that loans to SOEs crowd out investment of private firms.

From a policy perspective, declining credit efficiency is both a challenge and an opportunity. When credit efficiency is already low, policies that aim to reduce credit growth can be implemented with a low impact on output. To further reduce this impact, other policy means—such as a targeted fiscal stimulus—may be used to cushion the adjustment. The design of an efficient policy mix for the transition of the Chine economy to lower credit growth depends on answering several critical questions:

1.    How much did credit contribute to output growth in China historically?

2.    Has new credit become less effective in supporting output as the economy became saturated with credit?

3.    Can the real effects of China’s transition to lower credit growth be cushioned by fiscal policy?

Answering these questions empirically is challenging. This is because credit and fiscal stance not only affect output growth but also are affected by it. Consequently, simple correlations may over- or under-estimate the true causal effects of credit or fiscal stance on output.

Our recent IMF research (Chen et al., 2017A) addresses this challenge by using an instrumental variables approach. The identification is based on several formally tested observations on subnational political cycles in China. First, the timing of the appointments of provincial leaders is statistically unrelated to local economic conditions. Second, provincial leaders tend to boost credit and fiscal expenditure later in their tenure independently of local economic conditions, possibly to increase the chances of their retention and/or promotion. Finally, provincial stimulus is more likely to be provided through credit (fiscal) means when other provinces have higher credit (expenditure) growth, possibly due to peer effects. 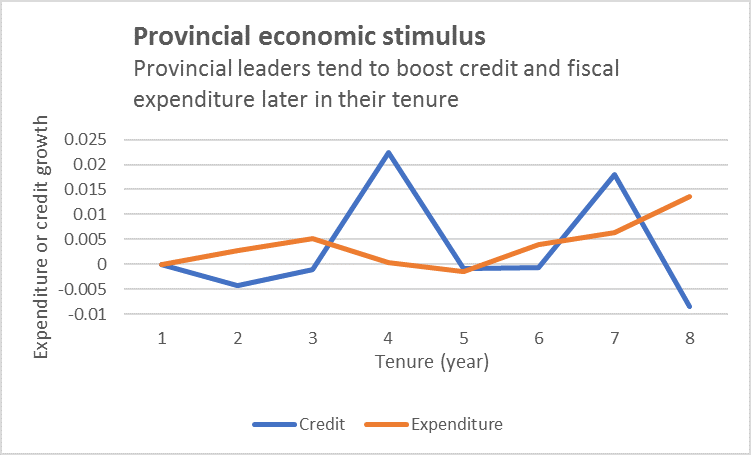 These observations allow us to use the tenure of provincial leaders, interacted with credit or expenditure in other provinces, as exogenous instruments to estimate the effect of credit or expenditure growth on provincial output. Formally, we regress changes in provincial GDP on changes in provincial credit and expenditure, all normalized by initial GDP. We include province fixed effects to capture time-invariant differences in output growth and other heterogeneity across provinces. We include year fixed effects to control for the aggregate macroeconomic conditions and centralized fiscal, monetary, and exchange rate policies. We instrument for credit and expenditure using the tenure of provincial leaders, interacted with credit and expenditure in other provinces. This specification is akin to the “open economy multiplier” of Nakamura and Steinsson (2014). The results are striking.


We estimate that, historically, credit has indeed supported output growth in China. In 2001-2008, GDP increased by 2 percent in response to a 10-percentage point increase in the ratio of credit to initial GDP. However, by 2010-2015, the effect of credit on output growth fell to almost zero. This might reflect the economy becoming saturated with credit, and is consistent with inefficient credit allocation identified in the earlier literature. The results suggest that, at present, credit cannot effectively support further growth of the Chinese economy.

In contrast, we find that fiscal stimulus may be powerful, if it is done correctly. We estimate that the fiscal multiplier for on-budget expenditure was 1.4 in 2010-2015. In other words, GDP increased by 1.4 percent in response to a 1-percentage point change in the ratio of on-budget expenditure to initial GDP. This multiplier is high in international comparisons, and is also higher than the historic 0.7 multiplier in China in 2001-2008. Therefore, fiscal policy can effectively support growth in the face of possible shocks, including those caused by lower credit growth. 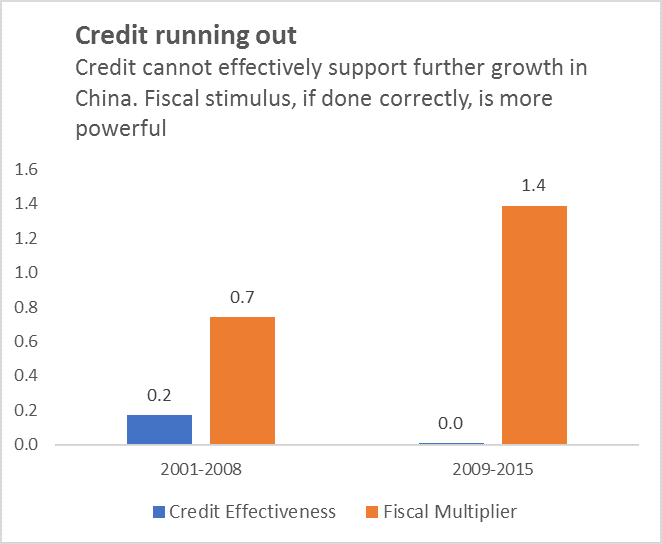 There are three caveats to our analysis. First, the off-budget expenditure fiscal multiplier is likely lower than the on-budget expenditure fiscal multiplier that we estimate. Since 2009, a large part of subnational government fiscal stimulus in China has been off-budget and channelled through the local government financing vehicles (Bai et al., 2016). Future fiscal policy should be on-budget to be most effective. Second, fiscal priorities matter. Historically, much of fiscal stimulus targeted infrastructure and manufacturing-related spending. It is advisable that future fiscal stimulus prioritizes social expenditure and transfers, to foster the rebalancing of the Chinese economy towards services. Finally, credit allocation matters. While the overall effect of credit on growth appears very low, prudent credit to efficient firms remains a desirable way to support growth.