The Long-term Persistence of Informal Finance in China

By using data on 137 counties in north China, we find that the density of financial institutions (Qianzhuang and Diandang) in the late Qing period has a significant positive effect on the number and total assets of small loan companies, a dominant institution of informal finance today. The persistent effect of historical financial institutions can be explained by Confucian culture, which instills integrity, lineage solidarity and acquaintance networks. 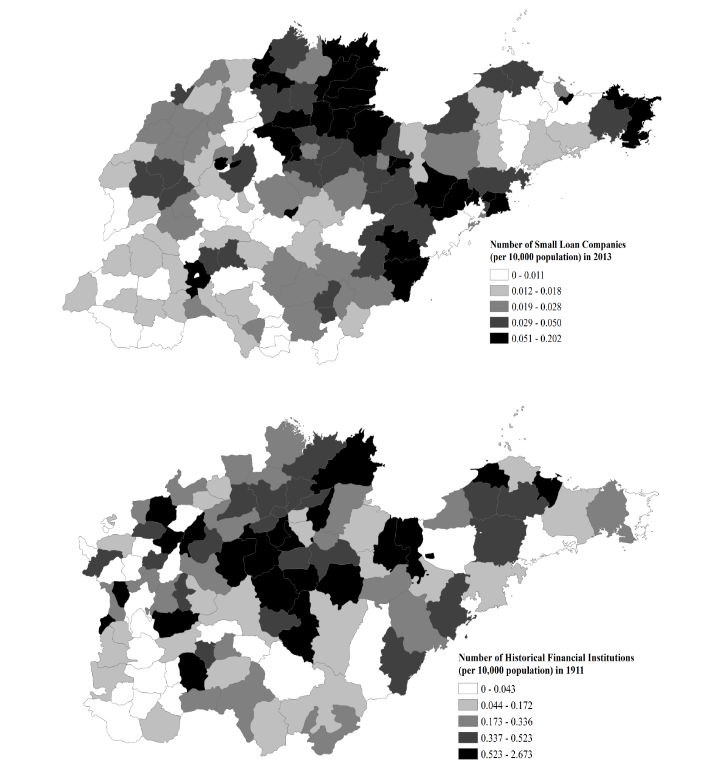 Note: Data on small loan companies are obtained from the Shandong Xiao’e Daikuan Qiye Xiehui (Association of Small Loan Companies of Shandong Province). Data on historical financial institutions are obtained from the Nongshang tongji biao (Statistics of Agriculture and Commerce) compiled by the government of the Republic of China in 1912.

The question in what follows is how historical Qianzhuang and Diandang can continue to affect the development of small loan companies today. We argue that, although these historical financial institutions had vanished for nearly a century, the business cultures they embodied survive to this day. The culture engendered by Confucianism, particularly the norms of integrity, lineage solidarity, and the acquaintance network that helped disseminate information and enforce the credit relationship in traditional Chinese society is still intact. For example, the deposit and loan businesses of Qianzhuang followed the principle of “integrity and righteousness” (kecun xinyi), which means that the payback guarantee depends more on a moral promise rather than physical collateral. Likewise, historical Piaohao (draft banks) also insisted on “righteousness over profits” (xianyi houli) and “from righteousness to profits” (yiyi zhili) and hence only provided services to respected credible people (Huang, 2002). In light of the fact that informal financial activities in China operate in an environment where the legal protection is relatively weak, they may still rely on the traditional business culture of integrity to sustain their growth. For example, Confucian lineage and relationship capital (guanxi) still played a key role in financing the rural industrialization in the 1990s (Peng, 2004).

In conclusion, our findings suggest that the development of contemporary informal finance in China is still significantly shaped by their historical counterparts and Confucian culture is likely a channel that has sustained such long-term persistence. Our study suggests the importance of historical and cultural factors in understanding the development of informal finance in contemporary China. This coincides with both the work of Grosjean (2011), who finds that the historical Islamic rule that prohibited interest-lending resulted in an underdeveloped financial market today, and Pascali (2016), who finds that the charity-lending institutions in fifteenth century Italy still affect the performance of the contemporary Italian banking sector.

Note 1: There were three types of institutions (Qianzhuang, Piaohao, and Diandang) that dominated the native financial market in late imperial China. In Shandong province, the presence of Piaohao was almost nonexistent in 1911 and hence is not included in our analysis.