China’s stock market imposes various trading restrictions such as daily price limits and trading suspension rules, which are intended to stabilize the market during turmoil. During China’s stock market crash in the summer of 2015, these trading restrictions made many highly valued stocks non-tradable and consequently caused mutual funds facing redemption pressure or with precautious concerns to sell other tradable stocks, exacerbating their price drops.

With the intention of preventing excessive speculation and stabilizing the stock market, China’s stock market adopted stringent trading restrictions, including price limits and a suspension of trading rule. The price limit requirement specifies that a stock must stop trading if the daily price move hits a 10% bound in either direction. The suspension of trading rule allows a listed company to apply for a halt in trading after the company issues a brief notice, such as a “publication of significant events.” This rule gives firms flexibility to suspend trading of their own stocks during certain periods. Similar to many other stock market restrictions, those rules are intended to prevent excessive speculation. However, our study shows that those trading restrictions significantly curtailed liquidity during the crisis of 2015. As a result, the prices of certain overvalued stocks were not able to reach their fair values. Institutional investors were not able to sell those overvalued stocks, either because those stocks had reached the daily price limits or because trading for those stocks had been suspended. Instead, when institutional investors needed liquidity (such as to meet redemption requests from their own investors or to reduce stock holdings in their portfolios out of precaution), they had to sell healthy and fairly valued stocks in their portfolios, which translated to shocks to the healthy stocks.

From June 15 to July 10, 2015, the Chinese stock market fell by over 32%, wiping out over US$3.5 trillion in three weeks. On 10 of 19 trading days during this period, less than 50% of securities could be traded due to price limits and trading suspensions (see Figure 1). This crash provides an interesting laboratory to examine the role played by these trading restrictions during this crash. As shown by our analysis in Liu, Xu, Zhong (2017), the restrictions made many highly valued stocks non-tradable during this period; consequently, mutual funds facing redemption pressure or with precautious concerns had to sell other tradable stocks, exacerbating their price drops. 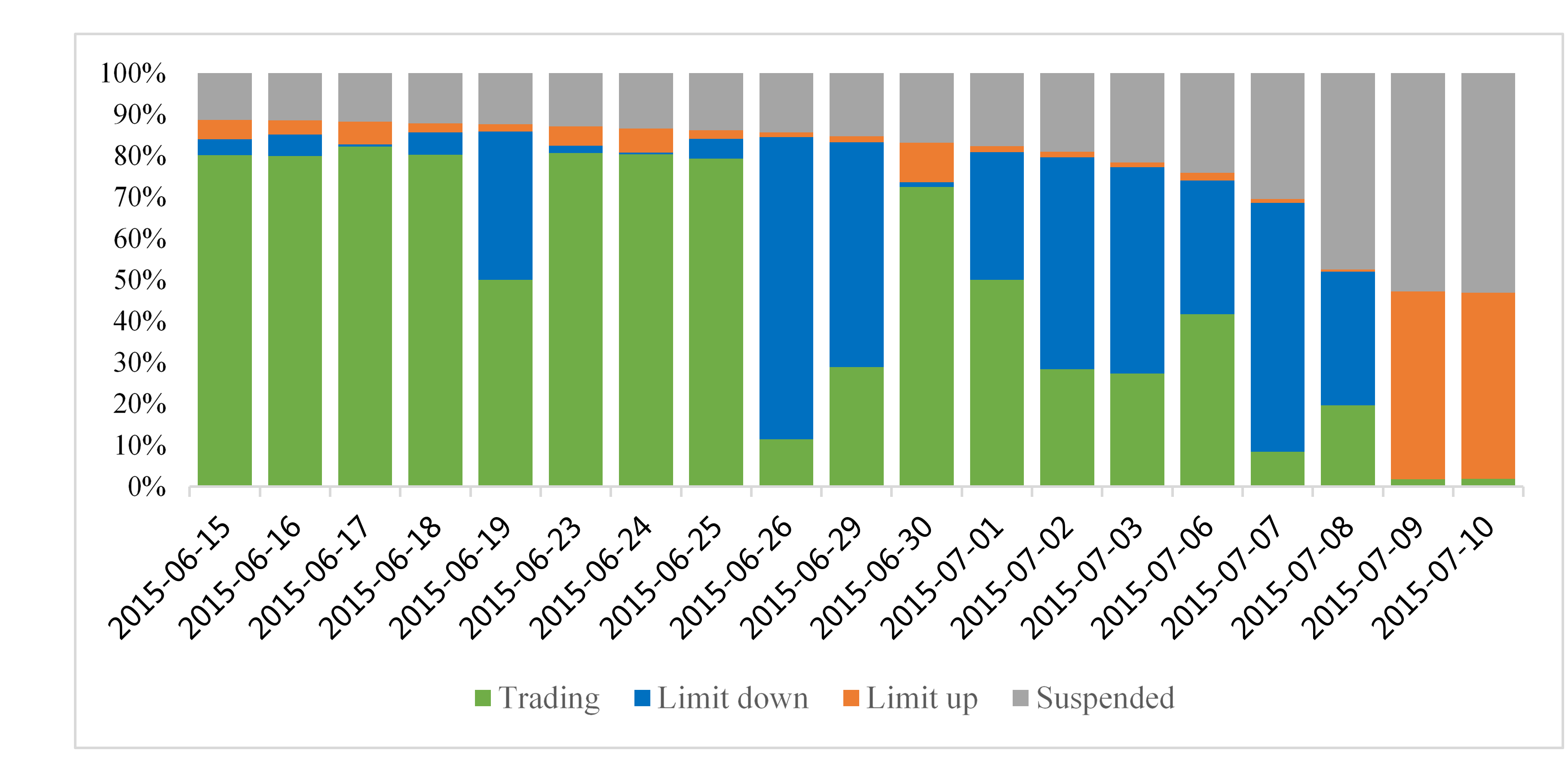 Another closely related question is how volatility and crash spill over across different markets. Many studies have been devoted to studying the mechanisms of financial contagion across different assets and different institutions and even across countries (e.g. Manconi, Massa, and Yasuda 2012, among others). The proposed channels include margin constraints (Brunnermerier and Pedersen 2009; Brunnermeier 2009), interbank linkage (Iyer et al. 2014), limited attention (Mondria 2006), uncertainty (Kannan and Köhler-Geib 2009), and others. Our study proposes and investigates a new channel of contagion in financial crisis—trading restrictions—and tests the effect of this channel using the China stock market crash in 2015.

China’s stock market experienced a roller-coaster ride in 2015: the Shanghai Composite Index had risen from around 3,000 in January to over 5,000 in June and then fell back to around 3,400 in July. However, the sharp rise of stock prices was not homogeneous across different stock exchanges and trading platforms. China has three different types of boards operated in two stock exchanges located in Shanghai and Shenzhen respectively. The main boards of the Shanghai Stock Exchange and the Shenzhen Stock Exchange have the most stringent listing standards and host mainly large firms. SME and ChiNext, both managed by the Shenzhen Stock Exchange, have much more relaxed listing standards, and trade many small and medium sized firms and even smaller entrepreneurial firms. As shown in Figure 2, from January until June of 2015, the price-earnings ratios of stocks on the ChiNext board increased from 70 to 150 and on the SME board from 50 to 95. However, those on the main board of the Shanghai Stock Exchange were kept at a stable level of around 20 as were the stocks on the main board of Shenzhen Stock Exchange. Although there was no dramatic price rise during the pre-crisis period, the stocks on the main boards of the two exchanges were similarly affected during the market crash period. During the crisis period (June 15 to July 10), the Chinese A-share market showed much stronger co-movement: the average R2 of a market model, which measures the extent individual stocks co-move with the market, increased from 47% to 66%. This co-movement largely increased in all three markets (see Figure 3), suggesting that there were non-fundamental factors that drove the price variations during this period.


Figure 2: P/E ratio of stocks on different types of board 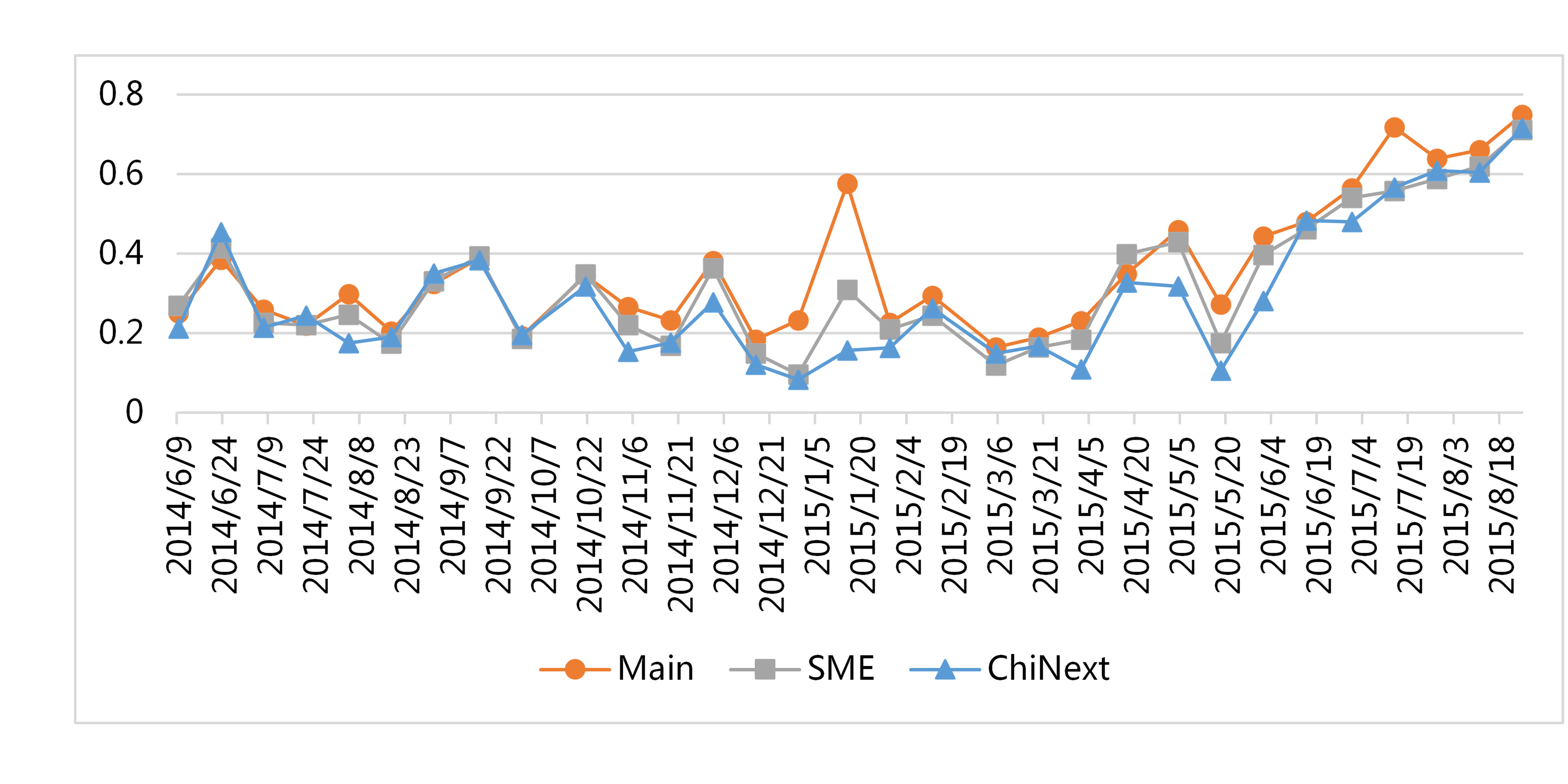 Examining data on mutual funds’ stock portfolios and stock trading, we documented that when a fund was exposed to 1% more non-trading stocks in their portfolios, it was 3% more likely to sell during the crisis period. We further show that stocks that were held by funds with larger exposure to non-tradable stocks experienced more negative abnormal returns, larger institutional sales, and lower trading volumes during the crisis period. When this exposure was increased by 1%, the stock experienced an extra -0.1% daily abnormal return during the crisis period, and this negative abnormal return was at least partially driven by large institutional sales. We further show that these negative abnormal returns and large institutional sale results were much stronger among more liquid stocks and stocks on the main boards, suggesting a contagion effect from restricted stocks to tradable stocks (such as stocks on the main boards).

Our analysis underscores the fact that trading restrictions may induce potential systematic risks and exaggerate the negative impacts of market crashes, suggesting that regulators should perform cost and benefit analyses of trading restrictions. The results imply that there is room for trading restrictions to be relaxed for certain assets during crashes to avoid drying out market liquidity.