Professors Jennifer Carpenter and Robert Whitelaw, both of New York University’s Stern School of Business, discuss the roles of the China’s stock market in improving the efficiency of capital allocation in China and in helping global investors achieve diversification.

China is at a pivotal point for its future economic growth as the country attempts to transition from a state-controlled, investment-driven economy to one that is more market-oriented and consumption-driven. It is also at a critical point in its path to integration in global financial markets, as highlighted by the debate over the potential inclusion of China A shares in MSCI indices (See Note 1). The development of the financial system in general, and the stock market in particular, will likely play an instrumental role in both of these transitions.  There are two key questions. First, can the stock market improve the efficiency of capital allocation and support broader financial stability? Second, can the stock market serve as a platform for greater global diversification? Skeptics argue that the stock market is a sideshow in China’s bank-dominated economy and that pricing is irrational and disconnected from fundamentals. However, recent research points to a market whose price informativeness and cross-sectional pricing are in line with those in developed markets, suggesting that with suitable ongoing reforms the stock market does indeed have a crucial role in the world economy.

These issues are obviously of critical importance to China and to those thinking of investing there; however, a number of developments over the last decade have made them an even broader concern. First, China’s GDP has more than tripled to over 11 trillion USD in 2016, on par with the United States in purchasing power terms, and it is the world’s largest contributor to global growth. Second, China’s stock market has grown more than five-fold to 7.5 trillion USD in market capitalization as of May 2017, and it has become the world’s second largest, while the number of stock listings has more than doubled to over 3,200. (See Figure 1, reproduced from Carpenter, Lu, and Whitelaw (2017), for a plot of the evolution of the number of firms traded (Panel A) and the market capitalization (Panel B) since the stock markets opened in the early 1990s.) Third, China has become the world's largest investor, with 5 trillion USD of total fixed asset investment in 2016. Fourth, the explosion of debt used to finance China’s post-crisis stimulus has raised concerns about the stability and efficiency of the financial system, making China’s stock market an important alternative financing channel. 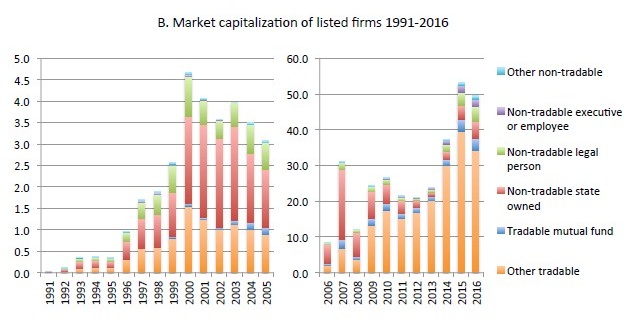 Academic research speaks directly to the questions facing China and the role of the stock market in its future. On the corporate side, researchers have studied the effects of the various stages of privatization on firm performance, the selection of firms for listing on the stock market, and additional reforms, including the split-share reform that has increased the number of tradable shares, all of which are relevant for both capital allocation and stock market performance. On the asset pricing side, they have examined issues including the informativeness of stock prices, cross-sectional pricing, and the historical returns that investors have earned. Efficient capital allocation necessarily requires efficiency in pricing and global investors have an obvious interest in how A shares are priced, especially given the reputation of the stock market in China as a casino. The “casino theory” was first proposed in 2001 and reflected the perception of a market divorced from fundamentals, plagued by accounting scandals, and manipulated by speculators.

China’s modern stock market opened in Shanghai and Shenzhen in 1990 during the final years of the leadership of Deng Xiaoping. One of the primary goals of this “stock market experiment” was to create a platform for the partial privatization of China’s SOEs, a major step in their ongoing reform. This objective significantly shaped the stock market’s initial form and development (Allen and Shen, 2011). The selection of firms for listing, the initial pricing, and the subsequent ownership structure were tightly controlled and monitored by the government, with roughly two-thirds of the shares designated non-tradable.

The Split-Share Structure Reform of 2005 ushered in the second stage of privatization in China. As Li, Wang, Cheung, and Jiang (2011) and Liao, Liu, and Wang (2014) explain, regulators and investors had become increasingly aware of problems created by the split-share ownership structure, which weakened minority shareholder protection and stifled the market for corporate control. Most firms completed their reform by the end of 2007 and Panel B of Figure 1 shows the effect on ownership, with only 25 percent of total shares remaining non-tradable.

Despite significant progress in privatization, state ownership and the dichotomy between state- and privately-controlled firms remain defining characteristics of China’s corporate sector. In a study of internal capital markets in state-controlled and privately-owned business groups, Chen, Jiang, Ljungqvist, Lu, and Zhou (2015) find that privately-owned groups allocate capital to units with better investment opportunities, while state-controlled groups do the opposite, attempting instead to avoid layoffs. As Lin, Cai, and Li (1998) emphasize, SOEs in China are charged with social, economic, and strategic objectives. By contrast, in the United States, individual-firm-value maximization is ingrained as firms’ primary objective.

While these policies in China may have been important for maintaining social stability and promoting growth in the past, there is concern about the degree to which they will interfere with efficient capital allocation going forward. Whited and Zhao (2015) conclude that if China’s debt and equity markets were as developed as in the United States, China would gain 70–100 percent in firm value. Thus, SOE reform remains one of the most important issues in China, as calls for the restructuring of firms in industries plagued by over-capacity are countered by resistance from vested interests and by the desire to preserve employment and social stability. Both domestic and global equity investors considering investment in SOEs must account for the valuation implications of their state-guided investment policies. By activating public equity investors, the stock market has the potential to accelerate SOE reform.

Allen, Qian, Shan, and Zhu (2017) shine additional light on the effects of tight government control of stock market listings by comparing the financial and accounting performance of listed firms to that of matched non-listed firms. They find that selection is problematic in that listed firms are poorer performers than non-listed firms both ex ante and ex post. Moreover, despite the increasing numbers of smaller, younger, and more entrepreneurial firms going public on the Shenzhen SME and ChiNext boards — which opened as a supplement to the Shanghai and Shenzhen main boards in 2004 and 2009 — listing registration is still tightly restricted by the CSRC, with almost 500 firms in line for approval as of May 2017. Evidence from IPO suspensions in Cong, Howell, and Zhang (2017) suggests that expediting the listing process would spur innovation and entrepreneurship. Clearly, to become a powerful tool for capital allocation, the stock market must be open to the most dynamic firms.

On the issue of the efficiency of the market, Carpenter, Lu, and Whitelaw (2017) estimate the predicted variation in a cross-sectional regression of future earnings on the log of past market valuations to quantify stock price informativeness in China and compare it to that in the United States. Although this measure reached a low in 2001 when the “casino theory” was proposed, in recent years it has often exceeded that in the United States. This result is surprising given the predominance of retail traders in China and is in striking contrast to the view that China’s stock market is disconnected from fundamentals. It suggests that China’s stock market has an important role to play in generating useful signals for managers and investors and improving the efficiency of capital allocation and corporate investment decisions in China. At the same time, China’s frequent regulatory experiments and interventions, which were particularly visible during the dramatic rise and fall of the market in 2015, can undermine price informativeness and the link between fundamentals and prices, as Brunnermeier, Sockin, and Xiong (2017) show theoretically.

While stock price informativeness focuses on cash flows, the pricing of these cash flows is also of interest. A number of papers report cross-sectional pricing results that are quite consistent with those documented in other markets. In one of the most recent studies, Carpenter et al. (2017) find that size, book-to-market, illiquidity, and extreme returns all appear to be statistically and economically significant predictors of returns.

In the context of market-wide returns, Carpenter et al. (2017) also estimate positive and economically large alphas for the China A share market from the perspective of a global investor. Notwithstanding the market’s high volatility, for global investors it is the covariance between China’s market returns and those of other stock markets that matters. This covariance is low for the Chinese market, thus much of the volatility is idiosyncratic from a global perspective and performance looks good.

In summary, in contrast to widespread perceptions, academic research suggests that, going forward, the stock market in China may serve as an important instrument for more efficient capital allocation. In addition, financial stability could be improved by shifting financial risk away from the over-burdened banking sector toward the stock market. However, for its potential to be realized, regulators must open access to many more firms, particularly those in growth sectors of the economy, and commit to a restrained regulatory policy that will permit the market to function efficiently. They must also continue with reforms to improve governance and facilitate market discipline. Such actions would undoubtedly also make the market more attractive to global investors and assuage the concerns that have up to this point prevented MSCI from including A shares in their broader indices. Participation by these investors could itself have positive spillover effects on the capital allocation function, lowering the cost of capital by eliminating the alpha noted above and increasing the amount of information in the market.

Note 1: MSCI announced its decision to include China A shares in the MSCI Emerging Markets Index on June 20, 2017.

Note 2: This article is based on the paper, “The Development of China’s Stock Market and Stakes for the Global Economy,” prepared for the Annual Review of Financial Economics.