The Rise and Fall of Imperial China

Why do some states stay intact for centuries, while others fall relatively soon after they are founded? Why are some strong, and others weak? Why are some ruled by a democratically elected leader, and others by an autocrat? These time-honored questions have been the subject of generations of remarkable scholarship. 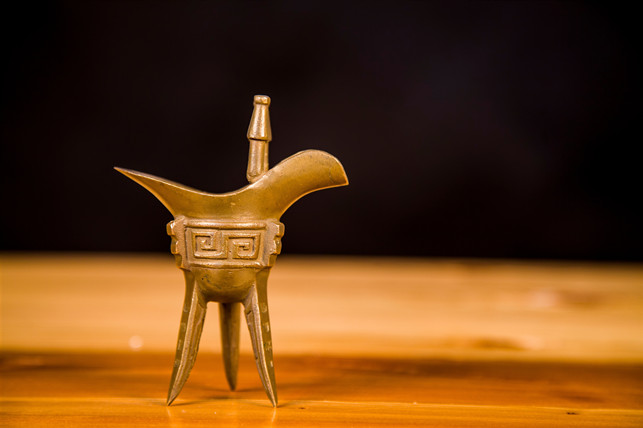 Yet, much of our understanding of how a state as an organization develops is based on how states evolved in Europe. For example, Charles Tilly, drawing from centuries of European history, argues that frequent and increasingly expensive interstate conflicts advantaged large territorial states that centralized bureaucracy and eliminated rival domestic organizations. He succinctly summarized this process as “war making the state” (Tilly 1975, 42).

For most of human history, the majority of the world’s population, however, has not been governed by a European-style state. Some non-European states have achieved incredible durability and effective governance by pursuing their own approach. Clearly, not all roads lead to Rome.

In a new book, The Rise and Fall of Imperial China (Princeton University Press, 2022), I examine the political development of imperial China in the last 2,000 years. I start with an examination of Chinese emperors. There were almost 300 emperors in Chinese history from the Qin dynasty (221–207 BCE) to the Qing dynasty (1644–1911). Emperor Modi of Jin (1234), the last emperor of the Jin dynasty, ruled China for less than one day. The Kangxi Emperor (1661–1722), the third emperor of the Qing dynasty, sat on the throne for 62 years. The fates of these rulers and their dynasties reveal important lessons that last beyond their times.

A general trend is that Chinese emperors became increasingly insecure—before they became extremely secure. As Figure 1 shows, the (hundred-year moving-average) probability of being deposed by elites increased to almost 50 percent in the late Tang dynasty (618–907). The turning point occurred in the Northern Song dynasty (960–1127). Emperors from the Song era onward were significantly less likely to be deposed¬, an indication that the rulers had strengthened their power vis-à-vis the elite. Chinese rulers enjoyed remarkably long tenures in the post-Song era. In the 18th century, the average reign of emperors reached almost 20 years—on par with European monarchs and far surpassing Islamic rulers in the same era. 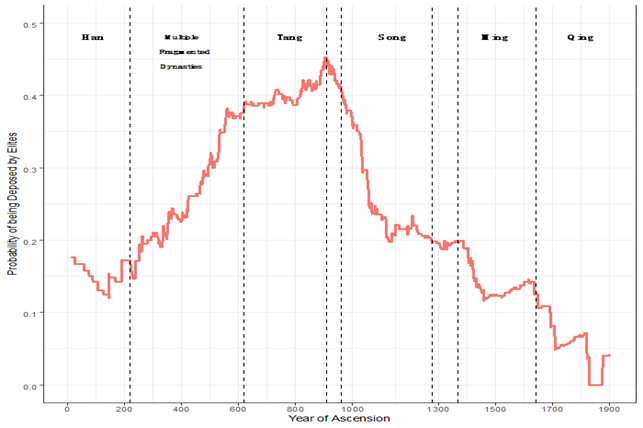 However, ruled by long-lived monarchs, the Chinese state gradually declined. Take fiscal strength as an example. As Figure 2 shows, in the early Song era, the Chinese government taxed over 15 percent of its economy, a level that England reached only in the 19th century. This dropped to almost 1 percent during the Qing dynasty. 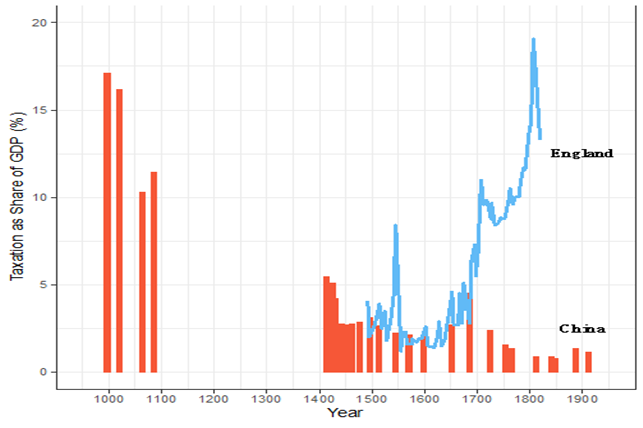 Why did long-lasting emperors have to govern a weak state? This was a fundamental tradeoff that I call the sovereign’s dilemma: a coherent elite that could take collective action to strengthen the state was also capable of revolting against the ruler. To stay in power, rulers had to divide and conquer the elite. Zeng Gongliang, the personnel minister during the Northern Song era, knew this well. When Emperor Shenzong (1067–1085) promoted a group of reformers to strengthen the country’s fiscal and military capacities to confront nomadic threat, Zeng warned that “it is important to have people of different opinions stirring each other up, so that no one will dare to do wrong.” Emperor Shenzong followed Zeng’s wisdom to keep the opposition in power. This strengthened Shenzong’s control over the elite but sabotaged the reform. Northern Song was eventually defeated by the Jurchen Jin and retreated to the south.

Chinese rulers were not always able to divide and conquer. During the Tang dynasty, an aristocracy ruled China. This aristocracy was a semi-hereditary caste that consisted of several hundred noble clans. These families formed a close-knit marriage network in which status endogamy persisted for centuries. As Figure 3 shows, through kinship networks, the Tang aristocracy connected elite families located in different corners of the empire. Coherent aristocratic interests constituted a credible check on monarchical power by institutionalizing the office of the chief councilor, which was almost on par with the emperor. It was a rare time in Chinese history when the emperor shared power with the elites. In the late Tang era, five of the twelve Tang emperors were toppled by a coup; meanwhile, Tang China was the world’s dominant empire. Tang merchants structured trade relations with the outside world on the ancient “silk roads.” Japan was most deeply influenced by Chinese culture and institutions during this period, which shaped the fabric of the former’s state structure, laws and institutions, art, literature, and written language. 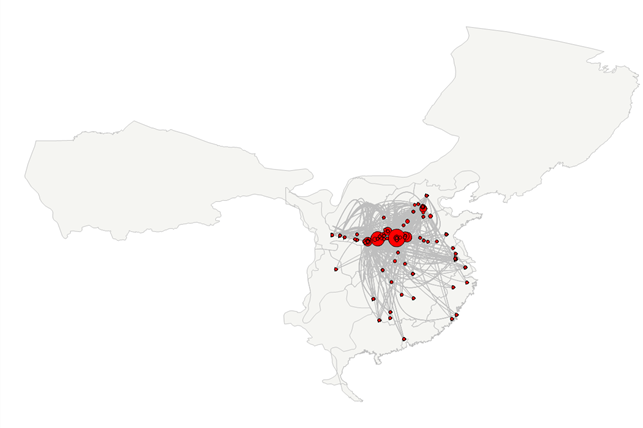 A rebellion in the late ninth century led by salt merchant Huang Chao physically destroyed the Tang aristocracy and opened a new chapter in Chinese history. Starting in Song times, the emperors took advantage of the power vacuum left by the Tang aristocracy and restructured the elite. They expanded civil service examinations to identify bureaucratic talent on a relatively meritocratic basis. With their competitiveness and focus on learning, the examinations brought selected members of local gentry families to the center and prevented them from forming a new aristocracy. As Figure 4 shows, the origins of major officials during Song times became scattered, and their kinship networks became localized. The emperors exploited the fragmented and localized elite to establish an absolute monarchy at the expense of a much-contracted state.

Sociologist Michael Mann distinguishes despotic power, which refers to a ruler’s power over the elite, and infrastructural power, which measures the state’s power over society (Mann 1984). Since the Song dynasty, emperors’ despotic power greatly expanded while the Chinese state’s infrastructural power gradually weakened. In various localities, elite families began to gain the upper hand in local governance. Occasionally, their sons and grandsons could succeed in the civil service examinations and used their power to lobby for more local autonomy and boycott efforts to increase central taxation. 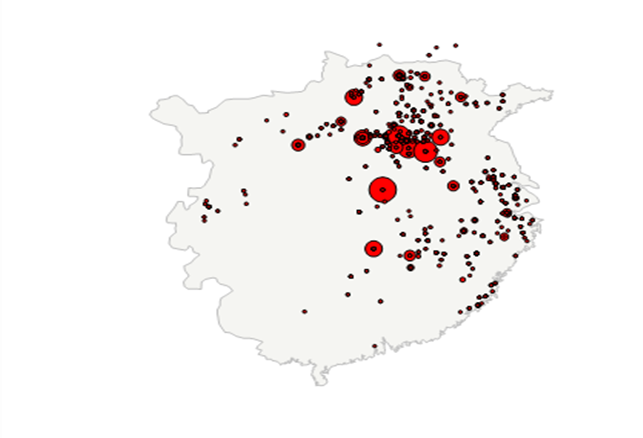 In the early 20th century, imperial China fell, not because of Western intrusion, such as the Opium Wars, nor because of internal rebellions, such as the Taiping Rebellion. It collapsed because the emperors’ relentless pursuit of power and survival through fragmenting the elites crippled the Chinese state and made it unable to respond to these external and internal challenges.

History does not repeat itself, but it rhymes. Many developing nations now face the same state-building dilemma that China did in the past: a coherent elite that can take collective action to strengthen the state can also revolt against the ruler. Many of the policy interventions carried out by the international community, such as the World Bank and the International Monetary Fund, focus on strengthening bureaucracies. But the Chinese experience demonstrates that state weakness is a social problem that cannot be resolved with a bureaucratic solution. Leaders in developing countries may need incentives to build state capacity, as doing so may compromise their personal survival. Lessons from China’s past and present indicate that state building should go beyond a narrow focus on strengthening bureaucracies to make elite social structures more compatible with a strong state and a durable regime.