Rebalancing in China: Progress and Prospects

This paper develops a framework for China’s rebalancing, reviews past progress, and discusses medium-term prospects. China has advanced well in reducing its excessive external surplus and moving towards consumption and services, while still lagging behind in reducing credit reliance, environmental pollution, and income inequality. Going forward, the economy will continue rebalancing in many dimensions, while credit will remain China’s Achilles heel unless decisive corporate restructuring and SOE reforms are implemented.

Rebalancing is the most frequent word associated with China's economic transition; however, people often interpret the term differently and tend to focus on one narrow aspect. What does rebalancing really mean? How much progress has China made on rebalancing and where is it heading? A recent IMF paper (Rebalancing in China: Progress and Prospects) attempts to answer these questions.

Rebalancing –What is in the name?

Rebalancing refers to the structural transformation that would put the Chinese economy on a more sustainable footing. It has four dimensions: external, internal, environmental, and distributional. While external rebalancing simply focuses on the role of foreign versus domestic demand in generating growth, internal rebalancing is a more robust process. It entails shifting from investment to consumption on the demand side, transitioning from industry to services on the supply side, as well as reducing credit intensity and improving allocative efficiency on the input side. These aspects are closely interlinked and often reinforce each other. Environmental rebalancing aims to make economic growth in general more environmentally-friendly. Lastly, income distribution rebalancing aims to make growth more inclusive by increasing the share of labor income in GDP and reducing income inequality.

Rebalancing –How much progress?

Since the Global Financial Crisis (GFC), China has made substantial progress on external rebalancing with its current account surplus down from the pre-crisis peak of 10 percent of GDP to around 3 percent in recent years (See Figure 1a). However, as China has moved away from the export-driven growth model, it has entered an era of investment-led growth. This was initially due to a large fiscal stimulus, but later reflected an economy-wide overinvestment. The investment ratio surged to 45 percent of GDP, which is significantly higher than international norms even compared to similar fast-growth episodes in Korea and Japan (See Figure 1b). In a nutshell, the imbalance has rotated from external to internal.

Significant progress is seen on external rebalancing since the GFC… 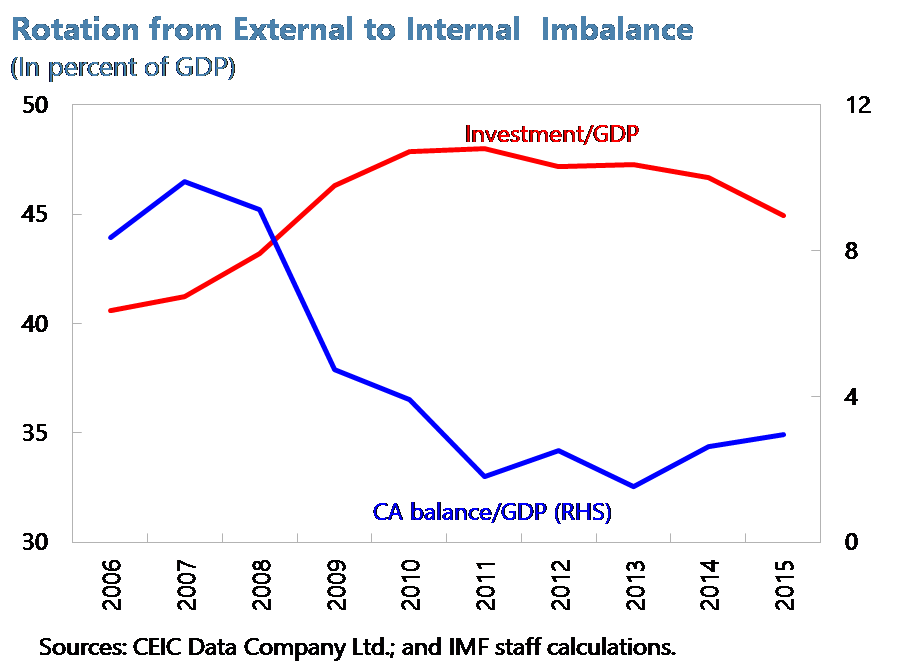 …at the cost of an internal demand imbalance as the investment ratio surges. 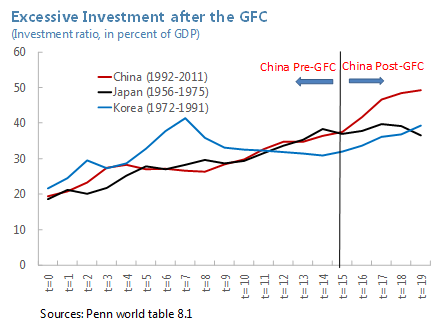 Since 2012, internal rebalancing has made headway, with a notable acceleration in 2015. On the demand side, consumption is now contributing more than two thirds of overall GDP growth, supported by both high income growth and pro-consumption reforms. The investment-to-GDP ratio has also retreated somewhat (See Figure 2a). China has also made significant progress on supply side rebalancing, switching from the industrial sector to the service sector–so-called “deindustrialization.” The speed of such a transition has been in line with the historical experience of other advanced economies (See Figure 2b).

Slowly moving away from investment to consumption…. 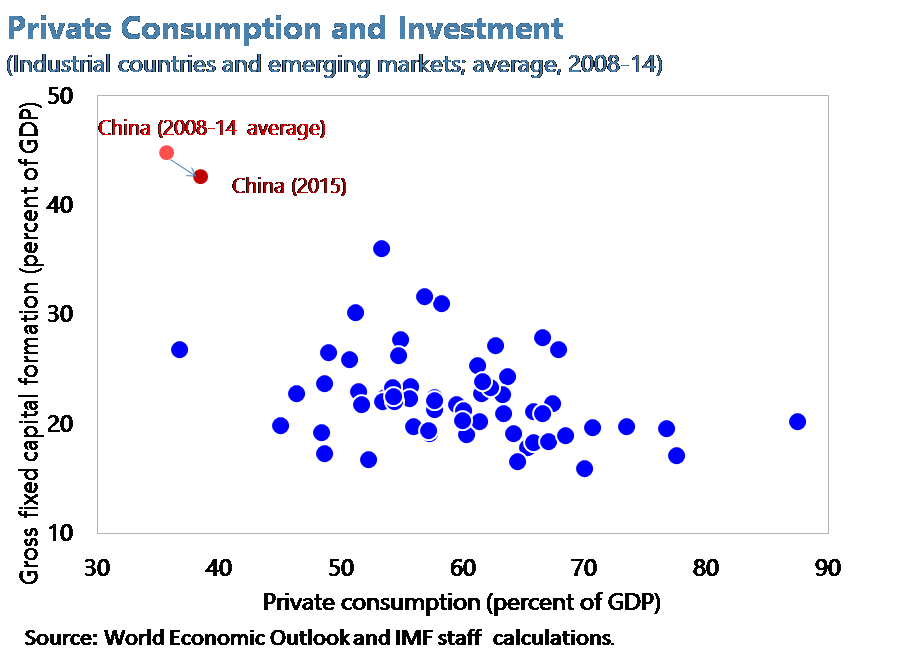 …has led to more significant progress switching from industry to services. 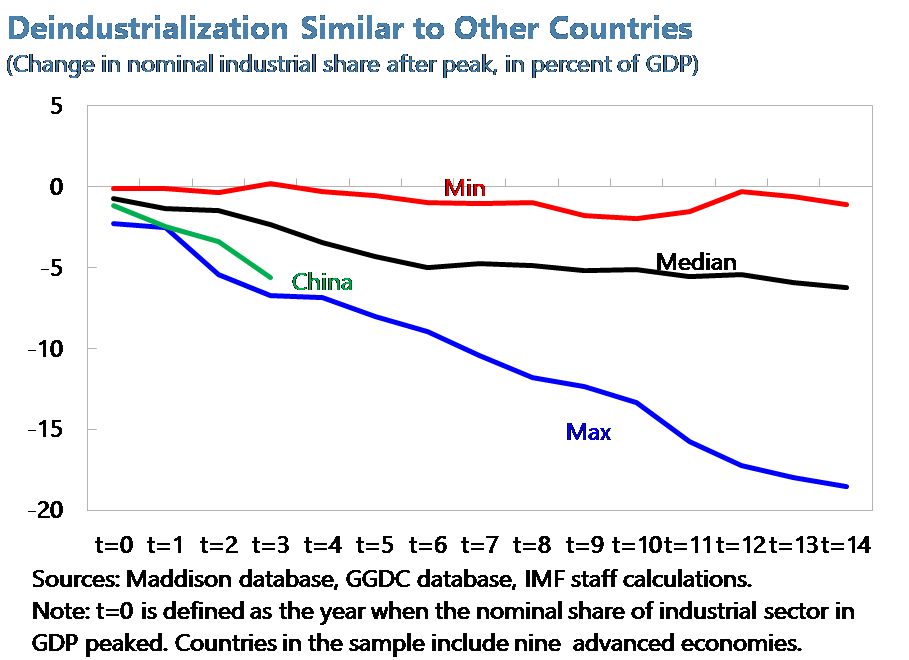 However, critically, China has not progressed on credit-side rebalancing. High and inefficient investment (See Figure 3a), especially by SOEs, has been financed by rapid credit growth. Credit intensity– the amount of new lending needed for an additional unit of output– has more than doubled in the post-GFC period (See Figure 3b). 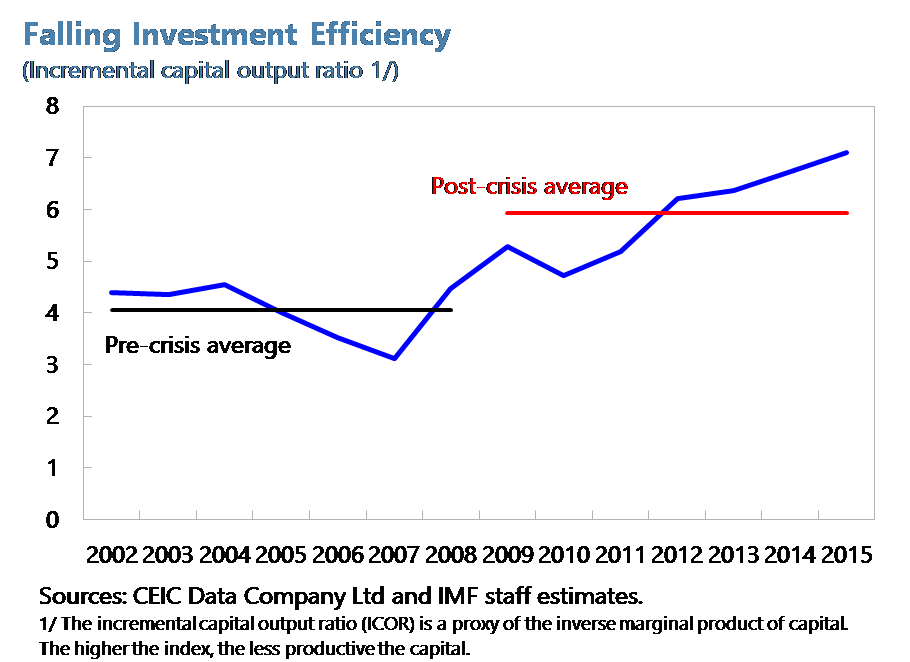 …has led to rising credit reliance of growth. 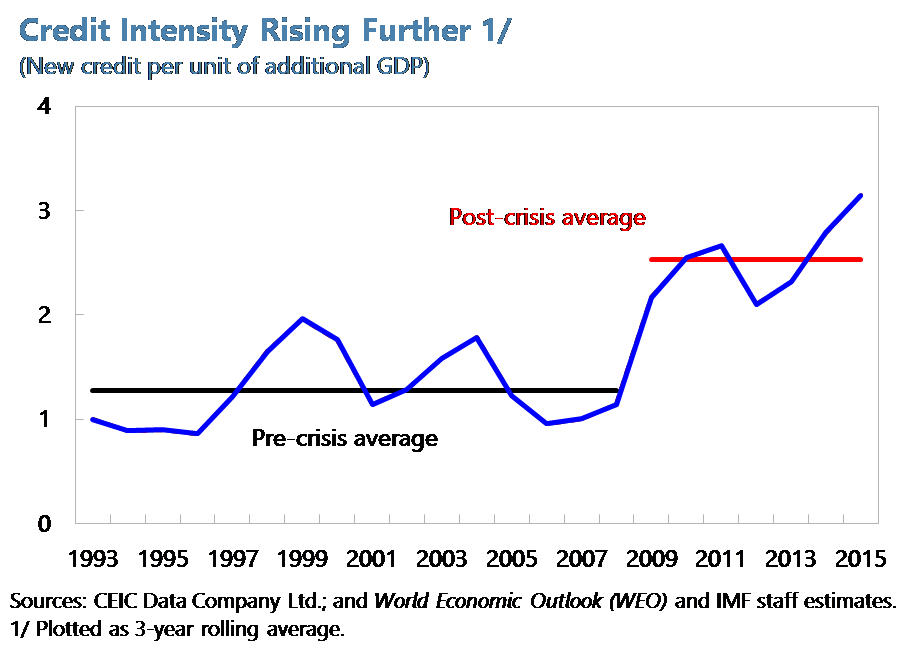 Rebalancing on environment and income distribution has been a mixed bag. While the energy intensity of output has been reduced, air pollution remains elevated in cities with PM 2.5 indexes (fine particle air pollution) significantly above air quality standard. Similarly, income inequality continues to be high (with the Gini coefficient at 0.5) despite the rising share of labor income in GDP.

Rebalancing –Where is it heading?

The crux of China’s external and internal demand rebalancing lies in its high national savings, mostly driven by households (See Figure 4). With an aging population and the envisaged strengthening of the social safety net, savings are expected to gradually fall. This will allow investment to moderate while keeping the current account balance contained. Lower savings will also give households more room to boost their consumption. The service sector will continue to rise, helping reduce pressure on the environment and raise labor’s share of national income. The Achilles heel of China’s rebalancing, however, lies in the credit-side. Unless high and hard growth targets are eliminated and decisive corporate restructuring and SOE reforms are implemented, credit rebalancing is likely to only slowly progress and China’s debt ratios will further grow. 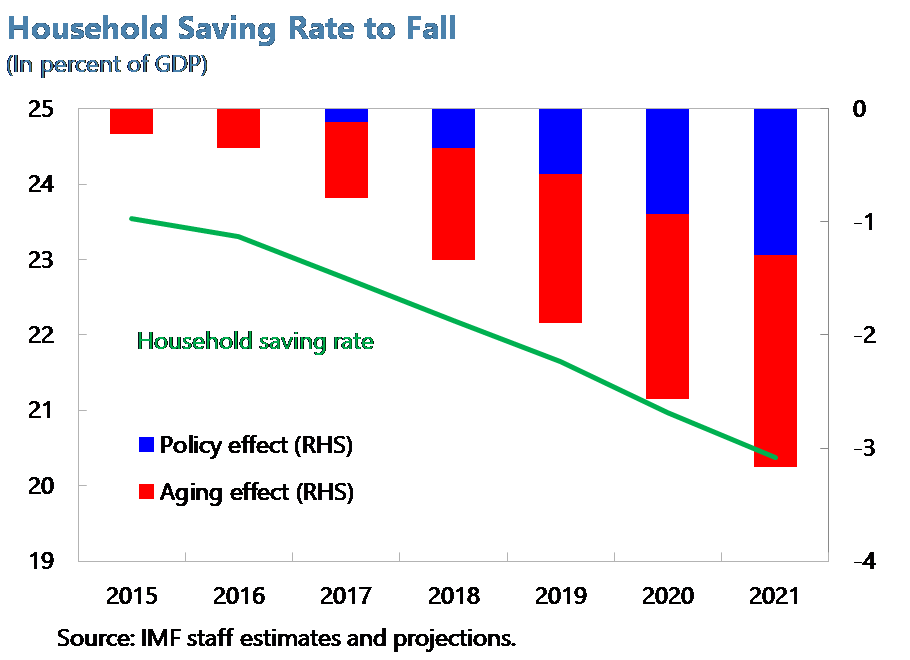