By comparing business loans made by a BigTech bank with those made by traditional banks, this study finds that BigTech loans tend to be smaller, and the BigTech lender is more likely to grant credit to new borrowers than conventional banks in response to expansionary monetary policy. The BigTech bank’s advantages in information, monitoring, and risk management are the potential mechanisms. 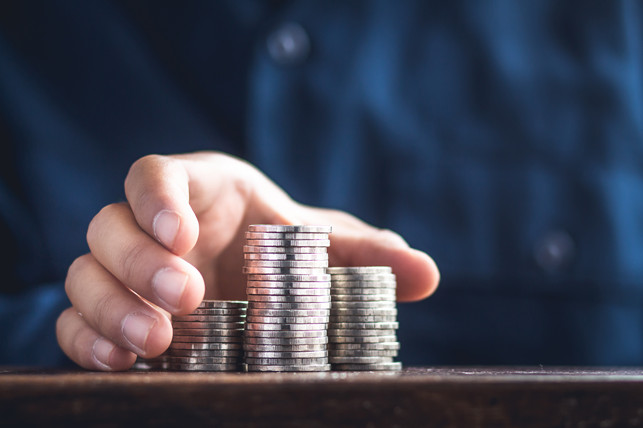 Financial technology (FinTech) has been a major phenomenon in the recent development of financial markets and its role has been unprecedentedly prominent during the COVID-19 crisis. By definition, FinTech is a broad concept that refers to the use of technology in providing financial services (Financial Stability Board 2019), and the main players can be divided into two categories: decentralized digital platforms for marketplace lending and big technology companies (BigTech) issuing credit, of which the latter is overtaking the former.

We employ a unique data set covering the full borrowing history of sampled micro, small, and medium-sized enterprises (MSMEs) from a major BigTech lender and traditional banks in China. The BigTech lender in our sample is MY Bank, launched by the Ant Group, one of the dominant BigTech companies both domestically and internationally. Due to MY Bank’s data regulation policy, we first obtain a 10% random sample of its firm customers, which contains around 340,000 firms, and then retrieve each firm’s credit history from MY Bank and traditional banks. Our data set covers monthly observations of both BigTech credit and bank credit to the same MSMEs from January 2017 to December 2019. Combined with variations in monetary policy, the data set provides an ideal laboratory for comparing the monetary policy transmission from BigTech lenders and traditional banks.

Our identification strategy focuses on the extensive margin, captured by a new lending relationship between a lender and a firm, and the intensive margin, captured by newly issued loans to a firm that has already borrowed from the bank. We explore the relative response of BigTech lending to changes in monetary policy, compared with traditional bank lending. After controlling firms’ demand for credit, our estimates capture the impact of monetary policy through the credit supply of different types of banks. In addition, we examine the real impact captured by the firms’ sale growth of BigTech credit relative to conventional bank loans. 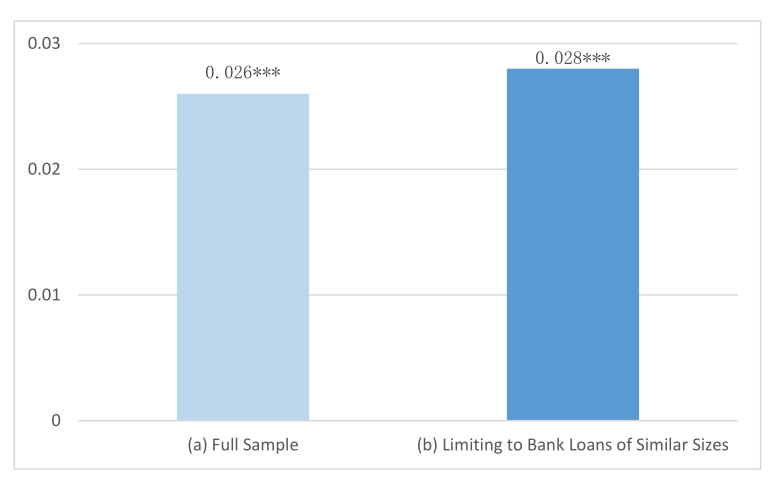 Note: The figure reports the negative coefficient of the regressions in which the new lending relationship (extensive margin) is regressed with respect to the interaction between ∆DR007 and a dummy indicating BigTech lender, with firm-time fixed effect. The results are based on two different samples: (a) full sample and (b) limited sample by restricting bank loans to those smaller than the 75th percentile of BigTech loans. The significance level is **p value < 0.05; ***p value < 0.01.

As shown in Figure 1, in the full sample (a), we find that BigTech lender is more responsive to monetary policy in the extensive margin. In other words, when monetary policy eases, BigTech lenders are more likely to establish new lending relationships with firms, compared with traditional banks. When the monetary policy rate decreases by one standard deviation, the probability of a BigTech lender building a new lending relationship with a firm is 2.6 percentage points higher than that of a traditional bank. Considering that the average probability of lending is 3.6%, this impact is economically large. When exploring differences between BigTech credit and bank credit, a potential concern might be the comparability of these two types of lenders with respect to credit size. To address this concern, we limit the sample of bank credits to those smaller than the 75th percentile in the distribution of BigTech credit, and the estimates in this limited sample (b) are very similar to the baseline result using the full sample.

When aggregating firms’ bank credit and BigTech credit to the city level, we document that when monetary policy eases by one standard deviation, the BigTech lender issues 41.73% more credit than traditional banks to MSMEs, which implies a very large impact on the aggregate economy. However, BigTech and traditional bank credits to firms that have already borrowed from these banks respond similarly to monetary policy changes. These results suggest that the stronger role of the BigTech lender comes from expanding financial access to MSMEs, which are usually underserved by traditional banks. The extent of building new lending relationships is so prominent that the response of BigTech credit at the city level becomes much stronger than bank credit.

Then we move to explain the more responsive role of the BigTech lender, and we show that BigTech lenders’ advantages in information, monitoring, and risk management are the potential mechanisms. As shown in Figure 2, compared with traditional bank loans, BigTech lending amplifies monetary policy to a larger extent for firms that have online businesses than firms that have offline businesses only (columns a and b), and the results are more pronounced when comparing BigTech credit with unsecured versus secured bank loans (columns c and d). Specifically, when the interest rate declines by one standard deviation, BigTech lenders’ probability of expanding lending relationships to offline sellers is 0.25 percentage point greater than that of traditional banks, but it increases to 0.50 percentage point for online sellers. These findings indicate that BigTech lenders react more strongly to monetary policy change because they may have better models for evaluating risk and bear more risks. 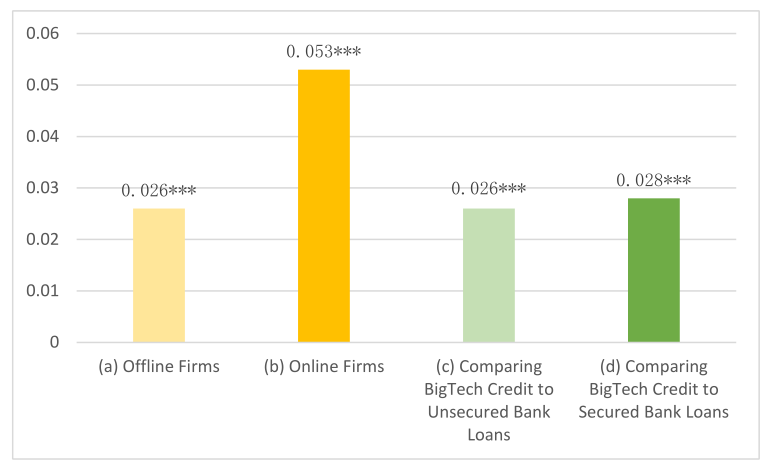 Note: The figure reports the negative coefficient of the regressions in which the new lending relationship (extensive margin) is regressed with respect to the interaction between ∆DR007 and a dummy indicating BigTech lender, with firm-time fixed effect. The results are based on four different subsamples: (a) offline firms, (b) online firms, (c) comparing BigTech credit to unsecured bank loans, and (d) comparing BigTech credit to secured bank loans. The significance level is **p value < 0.05; ***p value < 0.01.

The policy implication from our study is that monetary policymakers should account for the amplification mechanism of FinTech, and of BigTech lenders in particular, in financial markets. Moreover, coordination between macroeconomic policies and BigTech regulatory policies is necessary to improve the use of BigTech credit for financial access and serve the real economy. Lastly, given the leading status of China in FinTech development, findings based on evidence from China may also shed light on regulatory and monetary policies in other countries.