Exploiting the staggered rollout, since 2014, of judicial independence reform that removed local governments’ control over local courts’ financial and personnel decisions in China, we show that judicial independence can reduce local protectionism and foster cross-regional economic integration. Combining novel data on the universes of civil lawsuits and business registration records, we find that local defendants’ rate of winning court cases against non-local plaintiffs declined by 7.0% after the reform. Using the shareholding network extracted from business registration records, we show that the decline in local protectionism could attract 8.4% more inward investment flows into reformed localities. This could potentially increase China's GDP by 2.3% when judicial independence reform is implemented nationwide. 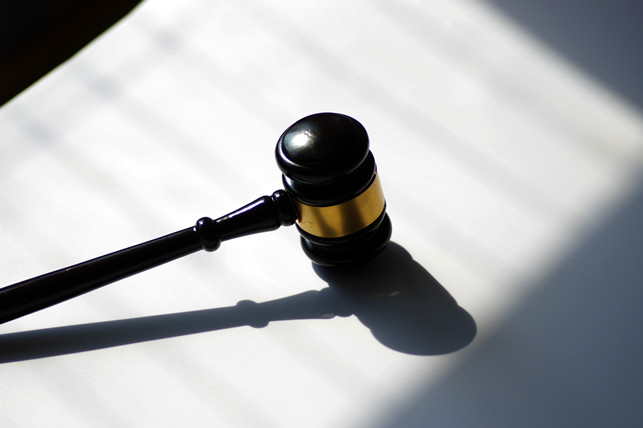 A just and functioning legal system that enforces contracts and property rights under the rule of law has been long perceived as a fundamental building block of economic prosperity (Smith 1937, North 1986, Besley and Persson 2011). As a core principle of the separation of powers, judicial independence is necessary to prevent improper political influence over the courts, thereby enabling the legal system to play its key role in safeguarding fair trials, settling commercial disputes, and maintaining a competitive market environment (Hamilton 1788, Hayek 1960, Buchanan 1974).

China is an ideal empirical setting to study the economic impact of judicial independence. For the most part of its reform era, China did not have independent judiciaries. A unique institutional arrangement in China’s Civil Procedure Law is that when one party brings a civil lawsuit against another, the trial is heard in the defendant's jurisdiction by default. This, combined with the country’s high level of economic decentralization, led to ubiquitous judicial local protectionism in handling commercial lawsuits (Gong 2004, Xu 2011, Li 2012, Ng and He 2017, Wang 2018). Since 2014, the Supreme People’s Court has been gradually rolling out high-stakes judicial reform that aims to shield local courts from local political influence, improving judicial independence by taking away local governments’ financial and personnel controls over local courts. The organizational changes created by the reform are shown in Figure 1. Extensive anecdotal observations by legal scholars, judges, and lawyers testify that the reform has significantly transformed China's judicial system (Zhou 2017, Chen 2018, Zhang and Ginsburg 2019, Supreme People’s Court 2019).

In a recent paper (Liu et al., 2022), we provide novel and rigorous empirical evidence on the impact of judicial independence on local protectionism and economic integration, in the context of China. We compile administrative data on the universes of Chinese court verdicts between 2014 and 2021 (133 million cases) and business registration records between 1978 and 2021 (75 million registries). Exploiting the staggered roll-out of judicial independence reform since 2014, we document that the reform has significantly reduced local protectionism in judicial decisions. As shown in Figure 2(a), following the reform, the win rate of local defendants against external plaintiffs dropped by 3.1 percentage points, a 7% reduction from the baseline average win rate of local defendants. The decline in the win rate is especially large for politically connected local defendants, consistent with these firms receiving more local protection pre-reform. Such a reduction in judicial local protectionism also encourages more small non-local firms to bring lawsuits against their large local counterparts in the longer term, as illustrated by Figure 2(b).

Notes: In panel (a), we plot the event study coefficients (and the corresponding 95% confidence intervals) using the local defendant’s win rate as the outcome variable. In panel (b), we plot the event study coefficients (as well as 95% confidence intervals) using the share of external plaintiff against local defendant cases over all cases between companies as the outcome variable. All event studies are estimated following the approach suggested by Sun and Abraham (2021).

As documented in Figure 3, across various measures commonly used in law literature, we find consistent evidence that judicial reform has not only made court rulings less favorable toward local defendants, but also led to significant improvements in the quality of judicial decisions: (a) appeal rates decreased for external plaintiffs, while remaining unchanged for local defendants; (b) judges became more likely to approve requests for evidence examination and expert witness testimony; (c) court verdicts provided more detailed judicial reasoning in judgment files (with higher word counts); and (d) judges became less likely to cite discretionary codes in judicial reasoning. These results rule out the alternative interpretation that judicial independence did not actually lead to better judicial decisions, but instead simply enabled judges to start “selling” judicial decisions equally to both sides. 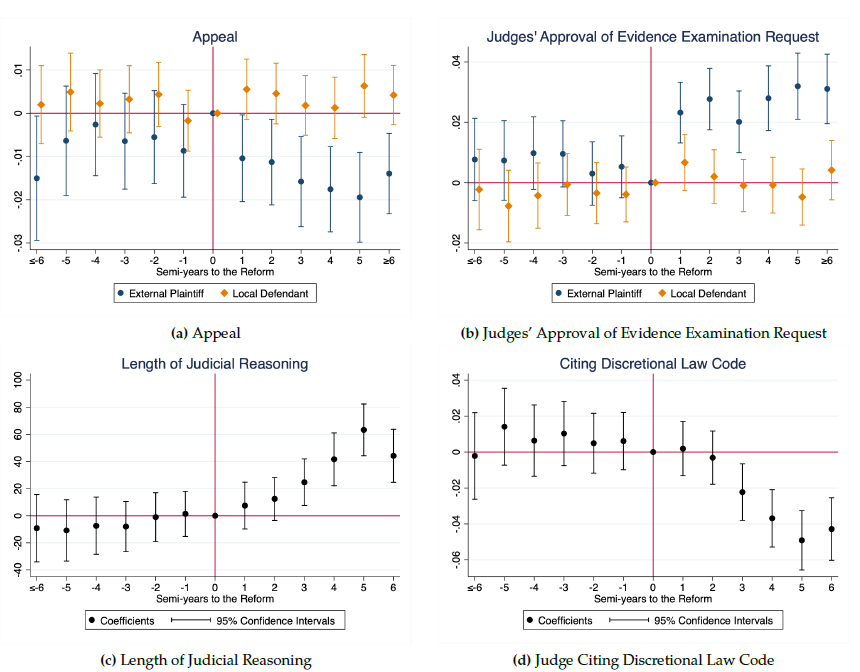 To understand how this affected economic integration, we construct a novel measure of cross-location entrepreneurial investment network in China by tracking the yearly changes in each firm’s shareholding structure, as documented in the administrative business registration records. As shown in Figure 4, we find that, when a local court has undergone judicial independence reform, the number of inward investments from non-local business investors to local firms increased by 8.4%, while the total amount increased by 8%. These findings suggest that judicial independence reform, by improving local business environments for non-local investors, has played an important role in facilitating economic integration in China. Using a model-based sufficient statistic, we calculate that, by fostering better economic integration, judicial reform has the potential to increase China’s GDP by 2.3% in the long term.

This systematic turn toward legalism is a first-order yet under-appreciated change in China’s model of governance. Moving forward, important questions for future research include how sustainable such co-existence of authoritarian central government and independent local judiciary will be, and how this turn toward legalism will affect the fate of an authoritarian regime and the welfare of its citizens in the long run. Answering such questions will help us better understand China, as well as other authoritarian regimes worldwide, such as Pakistan, Russia, and Turkey, that have recently gone through similar judicial independence reforms.