We provide new evidence on the causal effects of housing wealth on consumer behavior. To overcome the empirical challenge of non-random housing wealth changes, we exploit the unexpected announcement of China’s national-level new area—Xiong’an New Area—on April 1, 2017 as an exogenous shock to housing prices. We use a proprietary dataset of individual-level online consumption from the largest e-commerce company in China to measure various aspects of consumer behavior, such as consumption patterns, purchase hesitation, tolerance of unsatisfactory products, and shirking (as proxied by making online purchases during work hours). We also explore the underlying mechanisms and disentangle the realizable and unrealizable housing wealth effects.

Housing wealth accounts for a considerable portion of household net worth, particularly in China, and therefore fluctuations in housing wealth can have a substantial impact on household consumption (Campbell and Cocco 2007, Aladangady 2017, Waxman et al. 2020, Guren et al. 2021). However, moving beyond the focus on consumer spending itself, the question of how housing wealth affects consumer behavior has not been fully explored due to the lack of accurate behavioral measures and the difficulties of finding credibly exogenous variations in housing wealth required for causal inference. The answers to the above questions, however, are crucial because they have important implications to policymakers who aim to manage aggregate consumption demand, to sellers who try to understand consumer behavior so as to maximize profits, and to academics who attempt to explore the underlying mechanisms. Moreover, when investigating the underlying mechanisms, it is particularly challenging to find a clean setting to distinguish between the effects of realizable and unrealizable housing wealth, where realizable (unrealizable, respectively) housing wealth refers to housing wealth that can (can’t, respectively) be realized by selling the property.

To shed light on the causal impacts of housing wealth on consumer behavior, our recent working paper (Fang, Wang, and Yang 2022) exploits a unique policy event and a proprietary online consumption dataset provided by the largest e-commerce company in China. Specifically, we study the establishment of the Xiong’an New Area, which is the 19th state-level new area in China and was jointly announced by the Central Committee of the Communist Party of China and the State Council on April 1, 2017. Before the announcement, all pertinent information, including geographic coverage, administrative committee members, and announcement date, was kept in the strictest confidence. Therefore, the announcement of Xiong’an New Area creates a clean and exogenous shock to housing wealth.

We first quantify housing market responses to the announcement of the Xiong’an New Area using a difference-in-differences (DID) approach. Specifically, as shown in Figure 1, we create three groups of counties that were subject to the announcement at different levels: the three counties in the Xiong’an New Area proper (C3 hereafter); the nine counties adjacent to the Xiong’an New Area (C9 hereafter); and the 37 counties that are non-adjacent to Xiong’an (C37 hereafter). It should also be emphasized that the government imposed a ban on real estate transactions on April 2, 2017 in C3 counties, but not in C9 and C37 counties. We use this unique ban to differentiate the impacts of realizable and unrealizable housing wealth effects. With property prices in C3 and C9 skyrocketing overnight following the announcement (as shown in Figure 2), residents within and around the new area were overjoyed to find themselves sitting on a potential “goldmine.” Thus, we define consumers in C3 and C9 as different treatment groups, whereas those in C37 serve as a control group. The results show that the announcement caused listing prices of properties in C3 and C9 to increase by 65.70% and 24.86%, respectively, relative to the housing prices in C37. 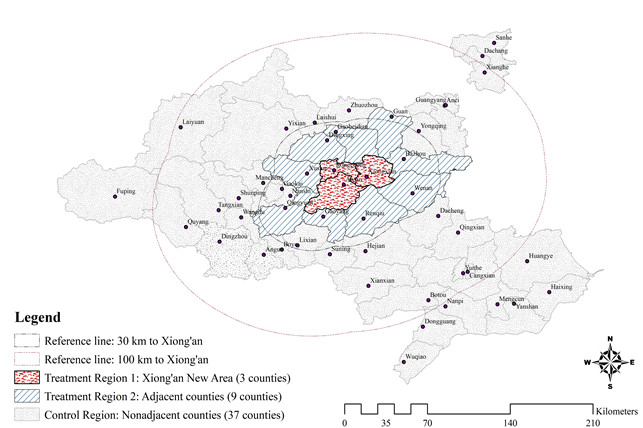 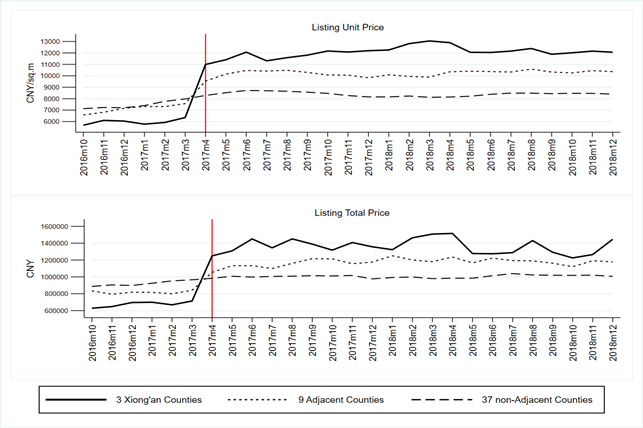 We then implement the DID strategy to examine the responses of consumer behavior to the housing wealth shock using online consumption data, which contain the universe of transactions of 0.1% randomly selected active sellers from the e-commerce company between October 2016 and December 2018. The estimation sample in the baseline analyses includes around 3.65 million online orders made by 44,496 local consumers in C3, 230,148 local consumers in C9, and 683,548 local consumers in C37.

Specifically, local consumers are those with delivery addresses in a specific county during our sample period. The great granularity of our online transaction data enables us to examine a set of novel measures of consumer behavior: consumer hesitation or delay in payment, willingness to return purchased goods, propensity to make online purchases during work hours, preference for discounted products, and tendency to upgrade consumption level.


The strict ban on housing transactions in Xiong’an from April 2, 2017 and the absence of the restriction on housing transactions in the counties outside Xiong’an provide us with a unique opportunity to distinguish between the realizable and unrealizable housing wealth effects. Moreover, based on the number of delivery addresses (properties) of a given consumer throughout the sample period, we classify consumers into two groups: those with only one address and those with multiple addresses. Doing so allows us to not only isolate the housing wealth effects, but also estimate the differential effects of the realizable and unrealizable wealth for each group.


After estimating the housing market and consumer behavioral responses to the announcement, we compute the elasticities of consumer behavior with respect to housing prices. Our results show that the elasticities of the combined effects are slightly greater for consumers with multiple addresses in C3, relative to those with a single address in C3. For consumers in C9, we reveal that the elasticities of the combined effects are substantially larger for those with multiple addresses than for single address consumers. When we look at the difference of realizable and unrealizable housing wealth effects, we show that the difference is stronger for consumers with multiple addresses, relative to those with one address. Our dynamic analysis demonstrates that the parallel trend assumption is satisfied and the effects of the announcement on payment hesitation, product return, shirking, and consumption upgrading persist in the long run.


Our paper is the first to reveal a causal impact of housing wealth on a variety of consumer behaviors, which are difficult to measure using traditional offline consumption data or survey data. The new evidence has important implications for how policymakers should respond when housing prices surge.