Is China Becoming a Service Economy?


We document a process of rapid tertiarization of the Chinese economy since 2005. We estimate total factor productivity through different methodologies and find that productivity has increased faster in services than in the manufacturing sector in recent years. Within the service sector, both consumer and producer services exhibit high productivity growth. Our findings alleviate concerns that the growing share of employment and value added in the service sector be a symptom of an incipient Baumol’s disease that could jeopardize the sustainability of future economic growth. 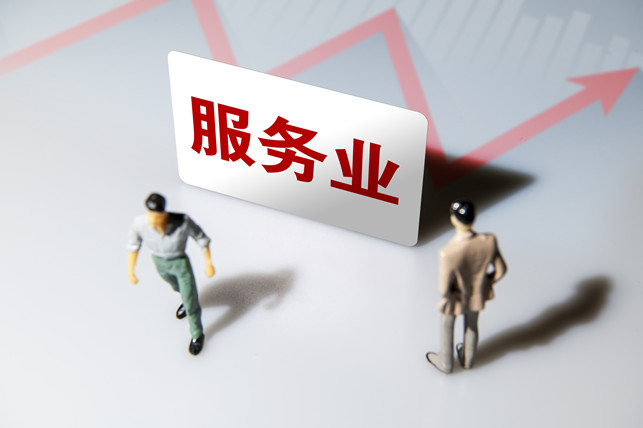 Since the onset of economic reforms in the 1980s, and following the process of liberalization in the 1990s, the most salient trait of Chinese economic development has been the swift industrialization that has transformed China into the largest industrial power worldwide (Song, Storesletten, and Zilibotti 2011). But the booming manufacturing sector may have obscured a more subtle change: China is currently undergoing a rapid tertiarization process. Namely, service industries are growing as a share of GDP at the expense of both agriculture and manufacturing. Rapid tertiarization could be a symptom of incipient Baumol’s disease: that is, as Chinese consumers get richer owing to increased productivity in manufacturing, they demand more luxury goods and services. This would be a bad omen for future growth in China. If the share of the service sector grows but the productivity of this sector is intrinsically stagnant, average GDP growth is destined to slow down. Baumol’s disease is already a primary concern for mature economies (see, for example, Duernecker, Herrendorf, and Valentinyi 2017 and 2018). However, the concern is also spreading to China in the wake of the recent economic slowdown, as officially acknowledged by Liu He, the Chinese vice premier, in a keynote speech at the World Internet Conference on September 26, 2021.

Yet, the importance and potential complexity of the tertiarization process are still underappreciated. Most of the existing economic research focuses on the manufacturing sector and its dynamics. This is partly due to data availability. China has a detailed census of manufacturing firms as well as a National Business Survey that covers all manufacturing plants above a threshold size. There is no comparable survey for service firms. Moreover, measuring productivity in the service sector is notoriously difficult.

In a recent paper (Chen et al, forthcoming), we provide an anatomy of China’s growing service sector. Using official statistics on sectoral aggregates, we document the rapid growth of service industries providing inputs to the industrial sector, which we label producer services. However, producer services are not the only driver of tertiarization. We also observe a boom in consumer services, i.e., the service industries that improve consumers’ access to goods (e.g., retail or restaurants) or provide services that are directly consumed by households (e.g., recreation, health, community services). In contrast, we do not find that government-provided services (public services) play a key role in China’s tertiarization process. More importantly, we document significantly higher growth in productivity in producer services and consumer services relative to the industrial and secondary sector. This observation alleviates concerns about the risk of Baumol’s disease in the Chinese economy.

Specifically, we document the following trends:

1. The tertiary sector is expanding relative to the secondary and industrial sectors in terms of both value-added and employment shares (see Figure 1).

3. The relative prices of all services grew over time.

4. Skill upgrading has been stronger in the service sector (especially for producer services, but also for consumer services) than in the industrial and construction sectors.

5. During 2005-15, productivity has grown more quickly in the consumer and producer service sectors than in the industrial sector. The results are robust to different methods of estimating productivity growth, including the procedure proposed by Fan, Peters, and Zilibotti (2022) that gets around measurement issues for the price index of services.

Table 1. The Decomposition of Sectoral Labor Productivity Growth Relative to the Industrial Sector, 2005–2015 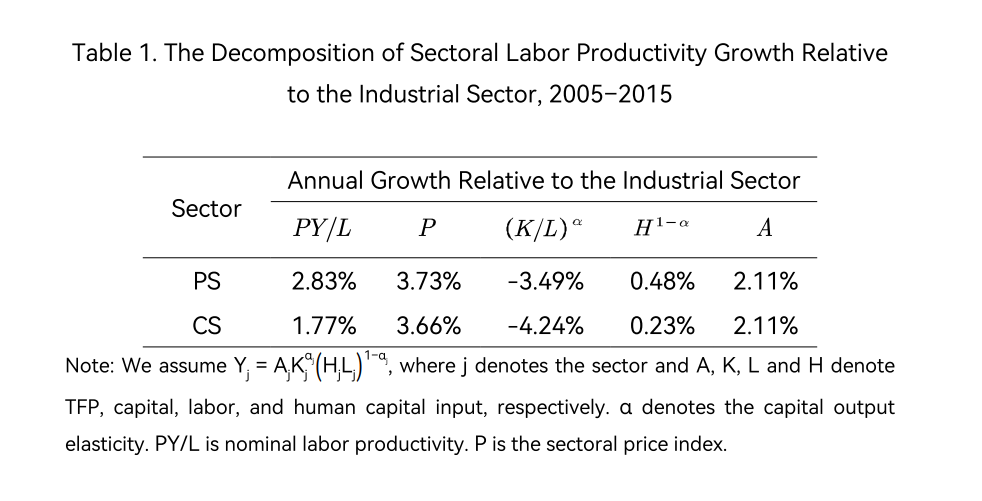 The joint observation of higher sectoral TFP growth in service industries and an increase over time in the relative price of services suggests a potentially important role of nonhomothetic demand. Namely, services appear to be luxuries. However, we also document an important role for supply factors. Even though services (especially producer services) already had the highest human capital intensity  in 2005, they also experienced high growth in this input. This suggests that service industries were the main destination for the increasingly educated Chinese labor force. Last but not least, TFP growth has been high in services—even higher than in the industrial sector. This finding runs against the traditional view that the ultimate driver of the development process is the growth of productivity in manufacturing, while tertiarization is a corollary of development that merely results from income effects. It is instead in line with the findings of Fan, Peters, and Zilibotti (2022) for India between 1987 and 2011. Human capital and TFP growth jointly account for a differential annual growth in value-added per worker of +2.7% for producer services and +2.4% for consumer services.  These gaps partially offset the lower physical investment in service industries.

A New Stage of Development?.

Overall, our findings suggest that China’s development process has entered a new stage in which services and the domestic market play a significantly more important role than in the past. If tertiarization is no mere consequence of rapid income growth, but a result of productivity growth in services, the growth process can prove resilient to Baumol’s disease.

Should we expect this trend to continue? The growing tension in international relations is likely to raise barriers to international trade. This might further speed the ongoing structural transformation by enhancing the importance of the domestic market and nontradable goods. The consolidation of an urban middle class is also likely to sustain growing demand for services in the coming years. Recent research from Beerli et al (2020) shows that demand forces are an important driver of the direction of technical change. Thus, the growing demand for services will likely trigger additional productivity growth in the service sector. Moreover, to the extent these services are local in nature, the benefits of growth can become even more skewed in favor of large cities. Finally, service-led growth is likely to reduce pressure on natural resources and environmental damage relative to growth solely driven by industrial production.