Zombie lending to downstream firms does not reduce the exit likelihood of upstream firms. Worse, it distorts efficiency-based firm exit in upstream industries. The exit distortion effect works through the trade credit chain and is more profound in industries with stricter financial constraints and tighter supply chain connections. 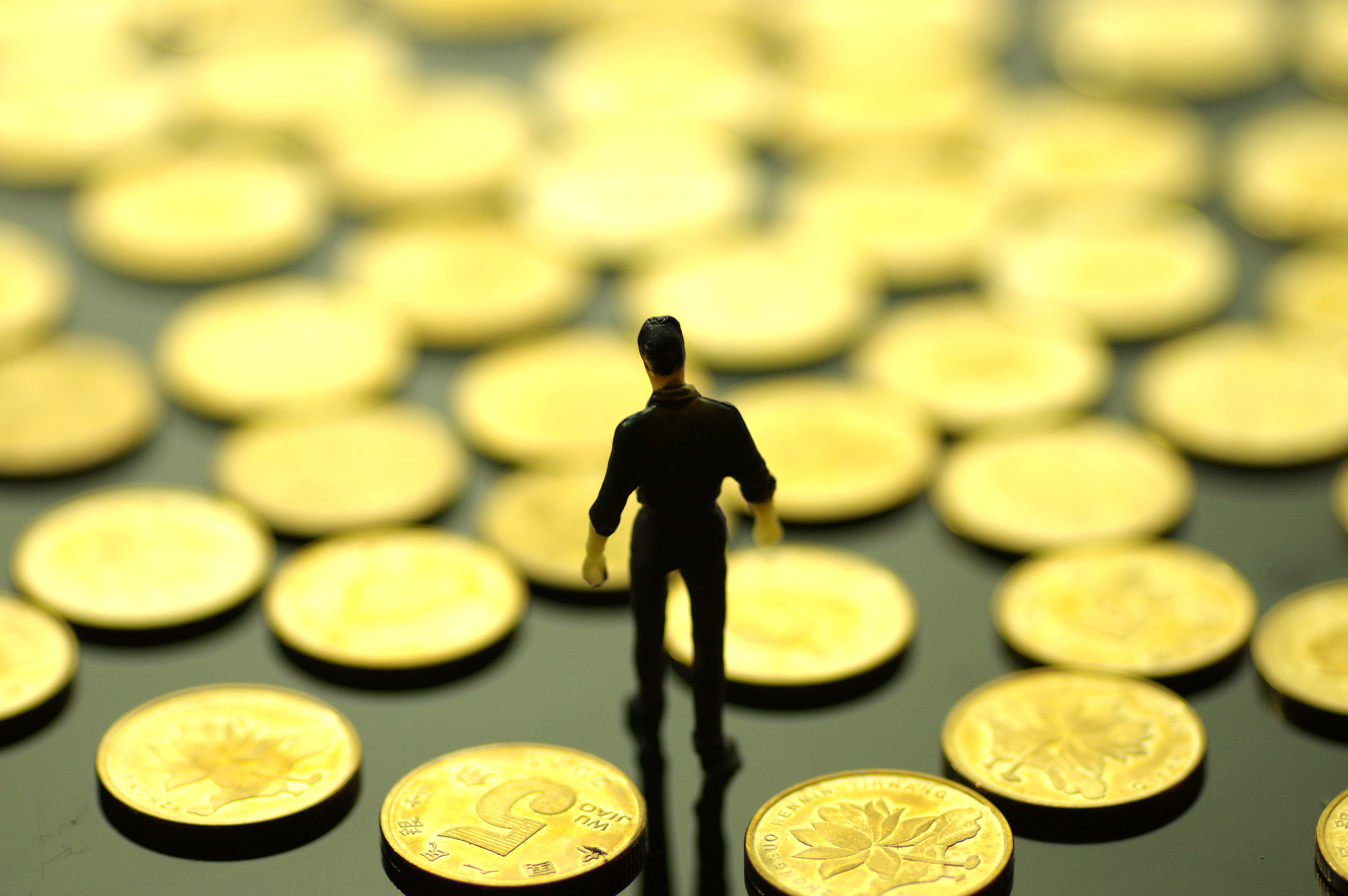 “In the presence of intersectoral input-output linkages, microeconomic idiosyncratic shocks may lead to aggregate fluctuations” (Acemoglu et al. 2012). Such externality rationalizes the government bailouts during the 2008 financial crisis and COVID-19 pandemic. For instance, while asking for additional government loans in 2009, General Motors (GM) executives claimed that the company’s bankruptcy would cause the collapse of its supplier network, dragging down not only GM, but also the rest of the auto industry. Yet ex-ante optimal government policies may not be optimal ex-post (Kydland and Prescott 1977). With evidence from Chinese industrial firms, we investigate the economic consequence of persistent corporate bailouts on supply chain exit contagion.

We base our empirical investigation on a comprehensive firm-level dataset for the 1998–2007 period. Following Caballero, Hoshi, and Kashyap (2008) and Fukuda and Nakamura (2011), we define an unprofitable firm—that is, a firm with earnings before interest and taxes (EBIT) less than the hypothetical risk-free interest payment—that receives subsidized credit or evergreen lending as a “zombie firm.” A zombie firm has an economic net worth below zero, but continues to operate and remains able to repay the debt because of the banks’ capital sufficiency concerns and the government’s desire to avoid mass firm failures (Peek and Rosengren 2005). Identifying zombie lending enables us to directly test whether the liquidity injection into customer firms can save supplier firms from the propagation of business failure. 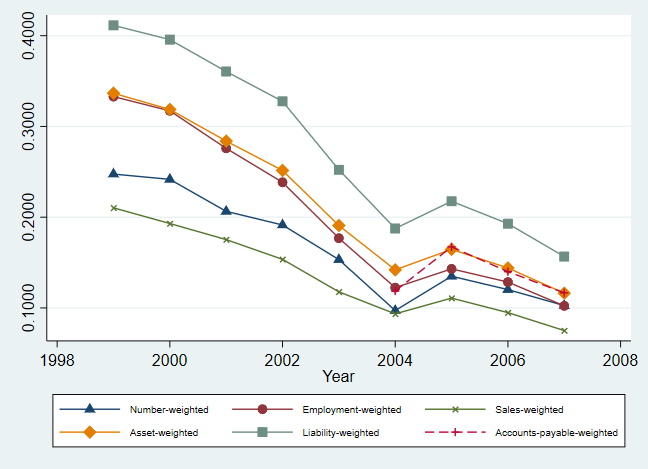 Baseline Findings: Zombie Lending Cannot Stop Supply Chain Contagion of Firm Exit and, Worse, It Distorts Efficiency-Based Firm Exit
Table 1 presents the baseline results. We find that government intervention throws good money after bad not only by misallocating credit, but also by incurring the efficiency loss of distorted firm exit. We find that a larger proportion of downstream zombie firms significantly increases the exit likelihood of an upstream firm. In addition, firms with higher productivity suffer more from this adverse effect. These findings imply that bailouts of customer firms cannot save supplier firms from the propagation of business failure. Worse, downstream credit misallocation significantly distorts efficiency-based firm exit in upstream industries. According to Schumpeter’s (1934) creative destruction theory, a growth-promoting process of industrial mutation involves the destruction of the old one and the creation of a new one. Efficiency-based firm exits are essential to revolutionizing the economic structure. Thus, such exit distortion has critical implications for aggregate economic growth. 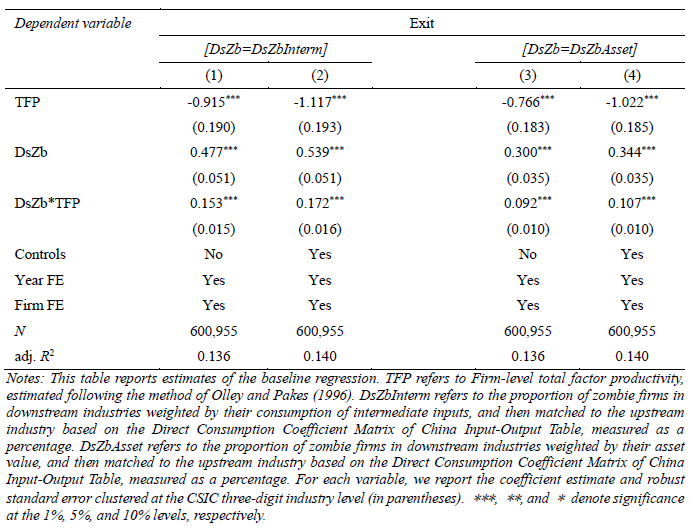 Table 1: The Impact of Zombie Lending to Downstream Firms on Upstream Firm Exit


Discussions on Potential Confounding Factors
Three potentially important confounding factors may also lie behind the link between the proportion of downstream zombie firms and upstream firm exit. The first is common shocks that hit firms operating in industries along a supply chain or located in the same region. We adopt several identification strategies to deal with this endogeneity issue. In the baseline regression, we control for the proportion of zombie firms in the same industry of the supplier’s province to incorporate contemporaneous industrial and regional factors related to credit misallocation. We use industry-level clustering to control for correlation within the industry (Petersen 2009) and run additional tests with industry-by-year fixed effects and province-by-year fixed effects to control for time-variant industry and regional shocks.

The second concern is the endogenous matching between low-quality suppliers and low-quality customers. Following Jacobson and von Schedvin (2015), we use supplier fixed effects to mitigate the problem of static endogenous matching. To address a more challenging dynamic matching concern that changes within-firm yet over time, we focus our interpretation of outcomes on the interaction term between total factor productivity (TFP) and the proportion of downstream zombie firms (DsZb) and find a pattern opposite to that predicted by dynamic matching. Moreover, the cross-sectional results based on suppliers’ dependence on the long-term supplier-customer relationships indicate that rematching, if it exists, mitigates supply chain exit contagion rather than driving the propagation of failures.

The third confounding factor is potential reverse causality. Inspired by the trade literature (Bastos, Silva, and Verhoogen 2018; Nunn and Qian 2014; Park et al. 2010), we construct a lagged instrumental variable (IV) by interacting the initial proportion of SOEs in each downstream industry with the lagged national average of SOEs’ leverage ratio and run 2SLS regressions. The interaction instrument varies by firm and time, which allows us to control for firm and year fixed effects. We can state the exclusion restriction for the interaction instrument as follows: any mechanism through which the propensity of downstream bailouts affects the supplier exit is constant across time and can be controlled by firm fixed effects; any mechanism causing supplier exit to vary with SOE credit sufficiency affects firms homogenously and can be controlled by year fixed effects. Throughout, our results are consistent with the notion that downstream corporate bailouts impose a distortion on upstream efficiency-based firm exit.

Consistent with the argument of Kiyotaki and Moore (2002) that financially constrained creditors are more exposed to supply chain contagion, we find that financially constrained firms are more vulnerable to the exit distortion caused by zombie lending to downstream firms because they are less able to absorb the adverse trade-credit shocks created by downstream zombie firms. In addition, compared to firms with a broad customer base, firms with sales concentrated in a few downstream industries suffer more from supply chain contagion. Also, supply chain contagion is more severe in industries with higher innovation intensity, as they face a higher switching cost in changing their customer industries. These results are consistent with Fabbri and Klapper’s (2016) finding that suppliers with weak bargaining power vis-à-vis their customers are more vulnerable in the trade credit chain.

Policy Implications and Suggestions
Our paper contributes to the great Keynes-Hayek debate on the role of the market and government. We show that government intervention to prevent the propagation of a single sector’s failure will bring about an even more significant efficiency loss. Such an intervention throws good money after bad not only by misallocating credit, but also by incurring the efficiency loss of distorted firm exit. Although unexpected market shocks, such as the 2008 financial crisis and the COVID-19 pandemic, may justify bailouts as a temporary solution, in the long run, government should terminate its intervention and let the market play its natural selection role. In addition, our paper contributes to the understanding of China’s economic growth by supplying new micro-evidence of resource misallocation coupled with government intervention and shows that the Chinese economy could develop further through the elimination of inefficient credit allocation.