In China, migrant children are at a disadvantaged and sometimes cannot enroll in public schools in migration destinations due to policy restrictions. Some migrant workers then have to leave their children behind in their hometowns, which causes the left-behind children problem. This study finds that if the enrollment restriction on migrant children is relaxed, migration of parents and children will increase, and the average human capital in the society will also increase. Low-skill families from small cities benefit most. 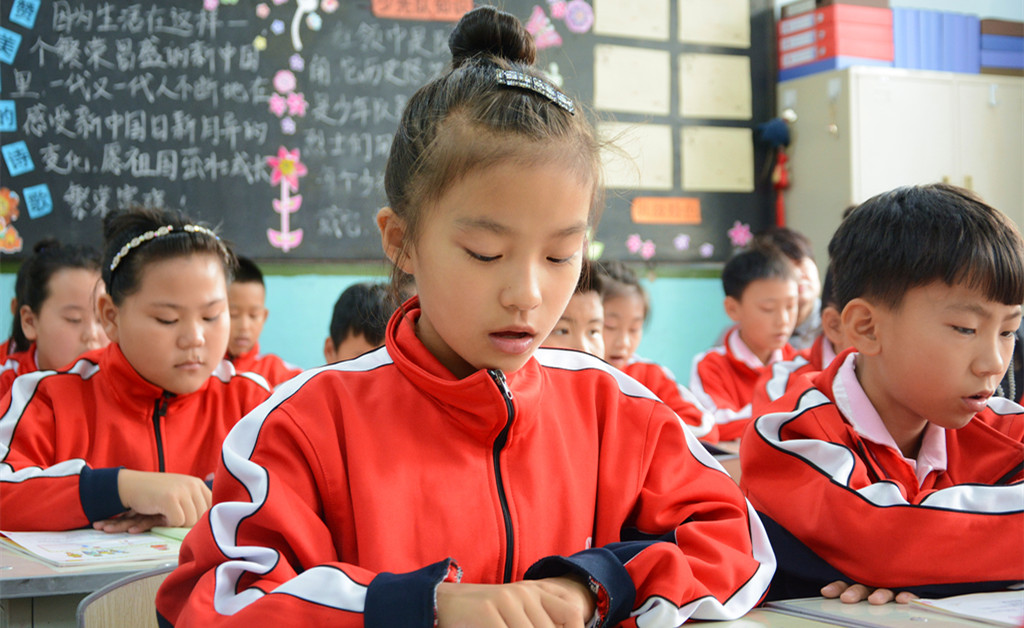 China continues to experience a massive wave of migration from underdeveloped areas to developed areas. There is despite a unique household registration system called "Hukou" in China. (Song, 2014) It requires all Chinese households to register in their home locations. Students without local Hukou are restricted from being admitted to local public schools. If they are excluded from the public school enrollment, their only options are private schools set up for migrant children, which are of much lower quality. Thus, migrant parents must make a tough choice: take their children with them to developed areas where public schools may reject them, or leave their children behind to attend hometown public schools. This creates de facto discrimination in children’s education. We refer to children migrating with parents as “migrant children” and children left behind in their hometowns as “left-behind children.”

Some local governments in developed cities (that is, migration destination cities) have tried to relax the enrollment restriction, but this resulted in huge protests from local parents, who believed that children from migrant families would harm their local classmates. An important and controversial policy debate arises: what is the human capital consequence of this discrimination within the public education system? If we remove this public school enrollment restriction on migrant students, will local students be harmed by the inflow of migrant students?

Previous literature discusses migrant and left-behind students’ disadvantages in cognitive achievement and school performance (Zhang et al. 2014, Meng and Yamauchi 2017), health outcomes and nutritional intake (Meng and Yamauchi 2017, Mu and de Brauw 2015), and emotional well-being (Ren and Treiman 2016). Although most argue that the public school enrollment restrictions on migrant students should be removed, and the left-behind children issue resolved, no formal model and quantitative analysis have been implemented.

My study quantitatively investigates this issue. First, I identify the peer effects of migrant and left-behind classmates using random assignment of students across classes within Chinese middle schools. In China, middle schools are required not to assign students into class based on their performance or family background. Thus, most Chinese middle schools randomly assign students into classes. After controlling for school fixed effects, peer compositions across classes within the same school are random, which solves the typical endogeneity issue. I find that increases of 10 percentage points in the proportion of left-behind peers and migrant peers in the class reduce the standardized test score of a student by 0.12 and 0.062 standard deviations, respectively. However, after one year of study, the negative peer effect from left-behind children is reduced, and the negative peer effect from migrant children is totally erased. Generally, the negative spillover is larger and more persistent from left-behind students than from migrant students.

Second, I construct a spatial equilibrium model in which children’s human capital depends on peer effects from their migrant and left-behind classmates, whether they are left behind, and whether they can enroll in public schools. Different locations have different school enrollment policies and different peer compositions. Parents need to choose which city to work in and whether to take their children with them if they migrate, according to wages and children’s expected human capital. I use population census data to quantify and estimate the model.

In the counterfactual analysis, I find that relaxation of the enrollment restriction can encourage both parents’ and children’s migration and alleviate the left-behind children problem. Figure 1 shows that when we relax the enrollment restriction, the national average human capital also increases. The gain is not distributed evenly across the population. Children from low-skill families with Hukou registrations in small cities benefit most, since most migrant families are low-skill families from small cities. 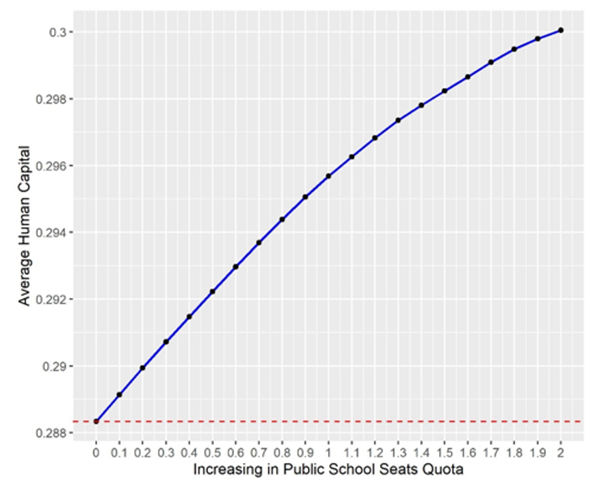 Note: The x axis is the proportional change in the public school seats assigned to migrant children in all cities.

This policy increases human capital mainly through two channels. First, it directly increases enrollment in good public schools and alleviates the left-behind children problem. Second, it encourages more parents to migrate with their children rather than leave them behind, and indirectly reduces the total spillover since left-behind children have larger negative spillovers than migrant children. Table 1 shows that the first channel can explain about 70% of the effect. The second channel can explain the remaining 30%.

In general, the public school enrollment restriction on migrant children in China is hindering the human capital accumulation. National-level human capital could be increased by relaxing this policy, and low-skill families from small cities would benefit most. Local parents’ concerns about negative spillovers from migrant children are not important in the long run.