We conduct a large-scale field experiment in the Guangdong province of China to examine the effect of informing individuals about government pension programs on their pension enrollment decisions and household consumption. Our experimental findings show the effectiveness of combining concrete and personalized information in designing informational material as well as the importance of targeting the most responsive population during information delivery. 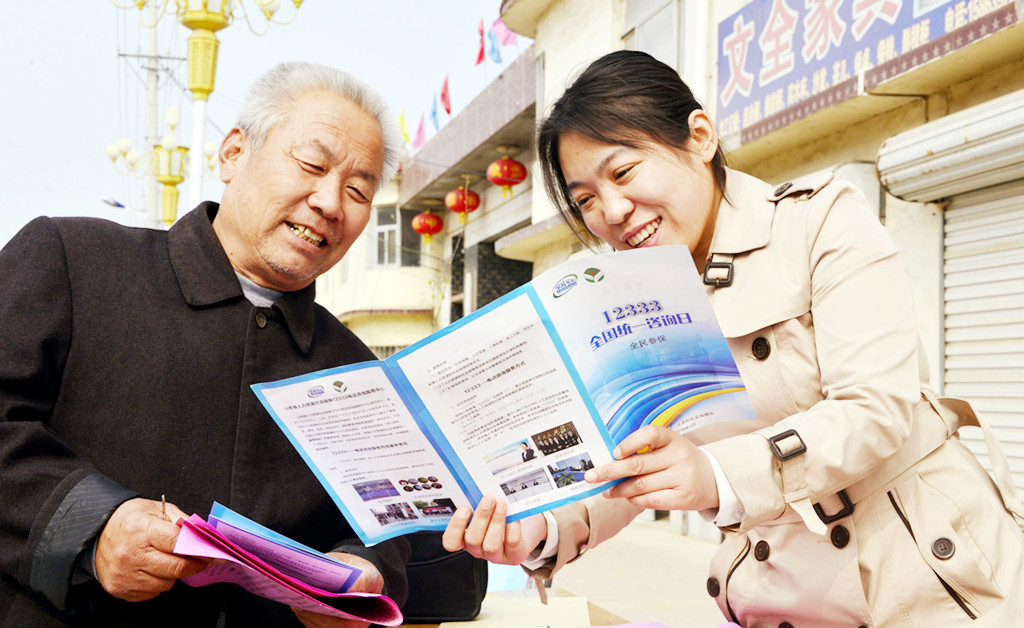 How to battle low participation or take-up rates is a central challenge for many government programs, despite these programs’ importance in improving social welfare in societies. Low participation may reflect ineligibility, but may also result from the bad design of the information content delivered to potential participants (Daponte et al., 1999; Heckman and Smith, 2004; Coady et al., 2013; Loprest, 2015; Giles et al., 2021). Using a large-scale field experiment, we evaluate the effectiveness of different information designs on both the decision to participate in China’s public old-age pension program and household consumption. We address the following two questions. What kind of information should be provided to increase employees’ awareness of and  enrollment in these programs? Do people with different demographic characteristics respond to the provided information differently?

The public old-age pension system consists of an “employee pension” program and a “resident pension” program. The former targets urban employees and belongs to one of five mandatory benefit programs, while the latter targets urban nonemployees and rural residents and is voluntary.  Under the employee pension program, the employer contribution goes to a pooled pension account, while the employee contribution accumulates in her individual pension account. Under the resident pension program, an individual’s contribution accumulates in her individual account, and she receives a “basic benefit” paid by government funds. Additionally, participants must meet two requirements to be eligible for receiving pension benefits. First, they must have contributed to the pension account for a minimum of 15 years. Second, they must have reached the benefit claim age.

Our experiment was conducted in three cities, Jieyang, Zhanjiang, and Zhuhai, Guangdong Province. We designed and distributed brochures with different information in the control and treatment groups. The brochure designed for the control group  contained only basic information, such as an overview of the two pension programs and the differences between them. The brochure designed for treatment groups contained more concrete and personalized information. For the first treatment, which is named “Benefit Example” (BE), we added an additional example of the benefit calculation for each type of pension program. For the second treatment, we used the same examples as in the BE group and provided an extra comparison of pension benefits to bank savings, based on the same amount; this group is called “Benefit Example + Comparison” (BEC) group. For the final treatment, referred to as “Individual Benefit + Comparison” (IBC), we calculated the tailored benefit based on the individual’s pension contribution record. The other information remained the same among the treatment groups and the control group.

Furthermore, we assigned subjects into two categories based on their enrollment status in the pension program. Type-1 households included the households in which none of an individual’s pension benefits could be computed, either because of non-enrollment or because of an unsuccessful match with the province’s social security administrative records. Type-2 households included households in which at least one of the member’s pension benefits could be calculated. We conducted separate randomization for these two types of households. Specifically, Type-1 households were randomly assigned into the control, BE, or BEC group, whereas Type-2 households were randomly assigned into any of the four groups (i.e., the control or one of the three treatment groups). Additionally, to control for information spillovers between household members, individuals in one household were assigned to one particular experiment group. Table 1 summarizes experiment. 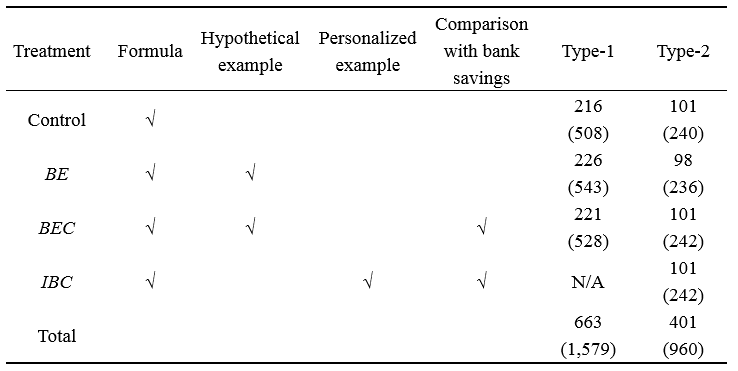 Note: The number of participants for each control and treatment group is in parentheses.

Figure 1 presents the enrollment before and after the experiment, which is determined from the pre-and post-experiment survey. There is no significant difference between groups before the intervention. It is significant that the take-up rate increases after the intervention for Type-1 households. In contrast, there is no significant difference for Type-2 households. One possible reason is that the enrollment of this type of households was high enough before the experiment, leaving nearly no room for improvement.

Because the urgency of enrollment differs across ages, we expect a stronger treatment effect on older participants. In particular, we find that in the BEC group, pension enrollment significantly increased after our intervention for Type-1 household participants aged 45 to 55. To illustrate this point, there are about 18.9 million people aged 45–55 in China. Assuming that they all received the brochures with two calculation examples and a comparison of pension benefits to bank savings, 2.84 million more people could enroll in the program.

Our post-experiment survey provides additional results. When Type-1 participants aged 45–55, were asked about the amount of pension benefits, 75% of the BEC group reported a “higher than previous estimation,” compared with 36% in the control group who answered in the same way. This suggests that the provision of information deemed salient and relevant could change subjects’ perceptions of pension benefits and consequently induce greater participation in the pension program.

Our consumption data were drawn from the household daily consumption log. This consumption survey is conducted by the National Bureau of Statistics of China (NBSC), which is similar to the Current Population Survey in the United States.  Intuitively, there are two opposing forces influencing consumption (Goda et al., 2014). First, learning about projected future benefits should increase individuals’ perceived wealth, and consequently increase their consumption (income effect). In contrast, those who have not enrolled may divert their consumption spending to pay for their pension contributions (substitution effect). Moreover, the relative strength of these two effects may vary across household type and ages. Compared to that of the control group, the after-before increase in monthly household consumption for 45–55 year-olds in the IBC treatment group is 20.1 percentage points higher (766 RMB or $110 for an average-income household), indicating that the income effect dominates for Type 2 households headed by individuals aged 45–55. Additionally, such effect lasts after the information intervention is removed, though the comparison between control and treatment is not significant anymore.

In summary, although retirement seminars and one-to-one consultation sessions are more effective than informational brochures, they are also costlier. Therefore, we investigate whether and how different forms of information can impact the enrollment rate. Our analyses suggest that detailed and concrete information delivered in brochures can work as well. Brochures require less input and are easy to implement. Our follow-up survey shows that 92% of respondents understand the pension program deeply after reading the informational brochures. Moreover, 60% of respondents show a willingness to receive a brochure regularly in the future. The heterogeneous treatment effect indicates that we should tailor the design of informational brochures to different types of people, which should be more effective for improving social welfare through enrollment and household consumption.

Beth Osborne Daponte, Seth Sanders and Lowell Taylor. 1999. “Why do low-income households not use food stamps? Evidence from an experiment.” Journal of Human Resources 612–628.

Gopi Shah Goda, Colleen Flaherty Manchester, and Aaron J. Sojourner. 2014. “What will my account really be worth? Experimental evidence on how retirement income projections affect saving.” Journal of Public Economics 119: 80–92.

James J Heckman and Jeffrey A Smith. 2004. “The determinants of participation in a social program: Evidence from a prototypical job training program.” Journal of Labor Economics 22(2): 243–298.