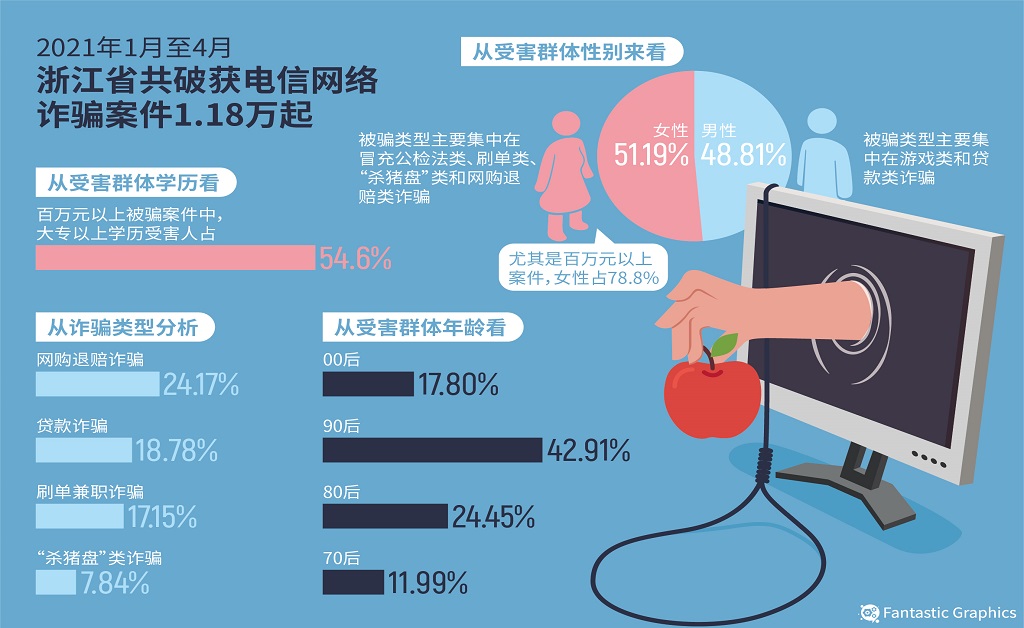 Fraud victimization has profound economic and social implications. With the widespread leakage of private information and ever-evolving fraud schemes, people frequently encounter these schemes. Millions of people are victimized by fraud and suffer enormous economic losses every year. A Federal Trade Commission survey reveals that 15.9 percent of U.S. respondents were victims of fraud in 2017. The direct monetary costs incurred by victimization could reach $50 billion per year (Brenner et al., 2020).

The issue is of greater importance in developing countries. In China, for instance, fraud incidents have grown at an annual rate of 20 to 30 percent in the past decade. According to a report by the Chinese government, nearly half of internet users encountered fraud schemes in 2018, and 28 percent of them suffered economic losses. Based on judicial data (China Judicial Documents), 32 percent of cybercrime is fraud, and it involved 46,000 fraudsters during 2016–2018 (see Note 1).

Previous research, mostly in criminology and the financial advisory industry, has examined the behavioral patterns of fraud offenders (Dimmock and Gerken, 2012; Egan et al., 2019). Behind the commonly encountered phone calls and emails are well-trained fraudsters in criminal organizations with sophisticated technologies. Those organizations are armed with details about potential victims and “scripts” instructing fraudsters on how to persuade potential victims to buy their stories and transfer money. However, it remains unclear why potential fraud victims actually become victimized. In our recent working paper (Gao et al., 2020), we investigate fraud victimization from the perspective of household financial conditions. Specifically, how and why do household credit constraints affect fraud victimization when households are faced with fraud schemes?

We rely on data from the Chinese Household Finance Survey (CHFS), conducted by the Survey and Research Center for China Household Finance in Southwestern University of Finance and Economics. This survey started in 2011 with a sample of 8,438 households covering 25 provinces in both urban and rural China. The CHFS sample size is enlarged every other year with a new survey wave. The most recent survey wave was conducted with 40,000 households in 2019. We use Wave 3 (CHFS-III) in 2015 because this is the only wave with nationally representative information on fraud victimization.

Using the urban sample of the CHFS-III, we find that a key determinant of who becomes a victim is that the household is facing credit constraints. Credit constraints happen when there are frictions in the supply of capital and individuals are unable to obtain sufficient loans from banks or other institutions (Hurst and Lusardi, 2004; Farre-Mensa and Ljungqvist, 2016). We consider a household as being credit-constrained if the household: (1) needs a loan, but has been rejected by banks or other credit institutions; (2) is unable to obtain sufficient loans from banks or other credit institutions; or (3) did not apply for loans because they have no collateral, or due to the complex paperwork, outstanding loans, or likelihood of being rejected. As shown in Table 1, the OLS estimation results indicate that being credit-constrained is associated with 2.3 percentage point increase in the probability of becoming a victim and 20.4 percent (that is, e0.186-1) increase in the total amount of subsequent economic losses for those being approached.

Fraud victimization involves two steps: being approached and subsequently being victimized. Table 2 shows the patterns of fraud approach and differences in the probability of victimization across various patterns in urban China. To account for the possibility that being approached is not random and the probability that being approached and being victimized are jointly determined by unobservables, we further implement the Heckman selection model, where we employ the e-commerce coverage as the exogenous variation that determines the probability of being approached by fraudsters. Through the internet and big data technology, fraudsters can target individuals more precisely based on leaked private information from telecom operators or online shopping websites. It is therefore plausible that living in a community with higher use of e-commerce is associated with a higher probability of one’s private information being leaked and being approached by fraudsters. In practice, we employ the average amount of online shopping expenditure at the community level to proxy for use of e-commerce. Our main findings remain robust.

Analyses on potential mechanisms suggest that the personal discount rate (impatience) and the need to expand one’s social network are important pathways through which credit constraints affect fraud victimization. Borrowing constraints can shape people’s preferences on current versus future consumption (Harrison et al., 2002). Credit constraints may lead to a higher discount rate in the future and thus make people more prone to believe well-disguised fraud schemes that promise an egregious return within a short period. In practice, similar to previous literature, we infer the discount rate by examining illiquid accounts of households. Both OLS and 2SLS estimation results show that credit constraints lead to a lower probability of having an illiquid account, a lower value of illiquid asset, and a lower ratio of illiquid asset in total asset. Households with credit constraints thus have significantly higher discount rates than households without credit constraints. In addition, to obtain social collateral, households with severe credit constraints would engage in activities to expand their social networks (Karlan et al., 2009); more social interaction itself, along with the associated behavior changes such as emphasis on cooperative behavior, could make them more susceptible to becoming victims. The OLS and 2SLS estimation results show that credit-constrained households are indeed more likely to use informal credit. Perhaps to facilitate the necessary social connections needed in informal borrowing, credit-constrained household spend more on commuting and telephone services and are more likely to behave cooperatively.

We believe our study has implications for anti-fraud policy. Current policies on combating fraud victimization emphasize anti-fraud campaigns and increasing financial literacy. More generally in the case of containing crimes, strengthening law enforcement and improving the legal environment have been thought to be effective to thwart crimes (Ehrlich, 1996; Di Tella and Schargrodsky, 2004). We provide a complementary perspective and evidence that policies focusing on the provision of financial services and credit to households may be as important. When encountering credit-related fraud schemes, sufficient access to credit provided to households would greatly reduce the risk of exposure to fraud schemes and allow these households to exhibit more patience—or be less subject to the temptation of quick payoffs.