This study proposes a novel channel through which trade liberalization may induce innovation through the reduction of trade policy uncertainties (TPU) in destination markets. To verify this link, we utilize the significant reduction of TPU engendered by China's accession to the World Trade Organization (WTO) in 2001 as a quasi-natural experiment. We find that reduction in TPU significantly encourages firms' patent applications and that firms' innovation responses to TPU reduction vary by productivity, ownership, exporting status, and the irreversibility of investment. 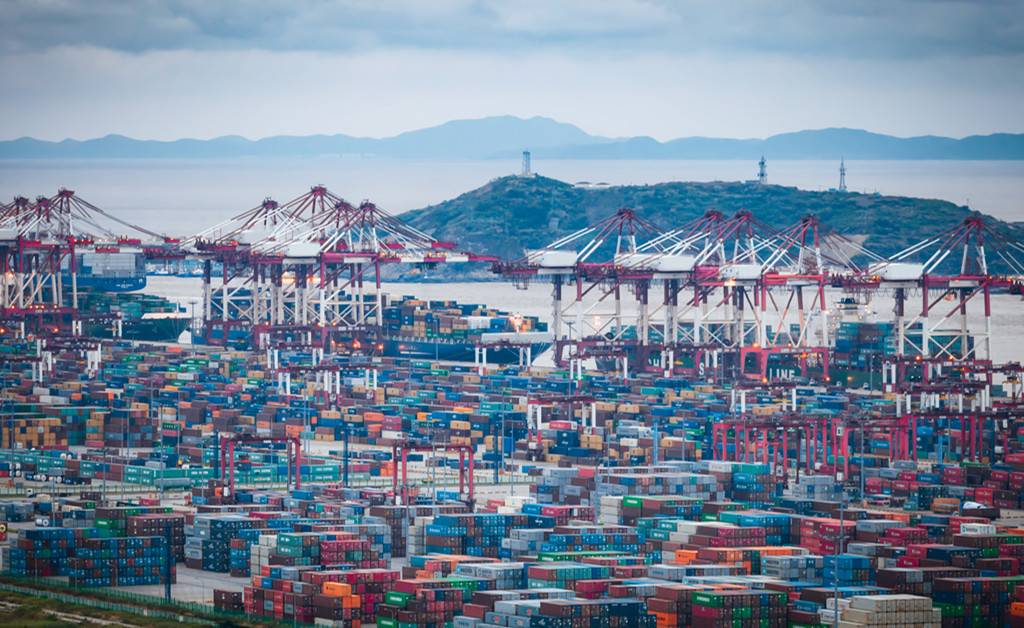 International trade has become more uncertain in recent years, which may lead to more-substantial long-run growth impacts than expected. Recent studies have documented that a surge of innovations often follows major episodes of trade liberalization. These studies emphasize that international trade can enhance innovation through competition (Bloom et al., 2016), widened access to foreign markets (Bustos, 2011), or the complementarity between imported intermediates and investment in research and development (R&D) (Bøler et al., 2015).

Our recent paper, Liu and Ma (2021), examines the impact of trade policy uncertainty on firm innovation, which innovation is fundamental for economic growth. We propose a novel channel through which trade liberalization encourages innovation activities through the removal of trade policy uncertainties (TPU) in the export destination markets. Innovation demands enormous and irreversible investments before commercialization and is deterred by uncertainty. Therefore, trade agreements can induce innovation because they reduce TPU and make market conditions more transparent and predictable. To confirm this, we exploit a quasi-natural experiment brought about by China's accession to the WTO. Specifically, the United States granted China permanent normal trade relationship (PNTR) status on January 1, 2002. Prior to that, Chinese exporters were at risk of being burdened with punitive "non-NTR" tariffs. The non-NTR tariffs were originally set under the Smoot–Hawley Tariff Act of 1930 against a few communist countries and were also known as the “column 2” tariff. Had China lost its temporary NTR status, it would likely have faced an average tariff increase from 4% in 2000 to 31% (Handley and Limão, 2017). The threat of high non-NTR tariffs was real for Chinese firms before 2001. Every year during the 1990s, the U.S. Congress fiercely debated overriding the Presidential waiver that renewed China's temporary NTR status. Thus, the conferment of PNTR status to China ended the uncertainty associated with the annual review by Congress and implied higher expected payoffs for the Chinese exporters. We measure TPU for each industry as the pre-WTO gap between the non-NTR tariff and the observed most favored nation (MFN) tariff following Handley and Limão (2017). That is, for industry j,

where σ is the substitutability coefficient, which we set at σ=3 following the literature. Due to the historic root of the non-NTR tariff (column 2 tariff), the uncertainty measure can plausibly be regarded as exogenous. According to our construction, the mean of TPU is 0.49, with the lowest TPU being zero for industries like phosphate fertilizer manufacturing and potash fertilizer manufacturing, and the highest TPU being 0.84 for oral cleaning products manufacturing.

We examine the extent to which the reduction in TPU can explain the recent surge in Chinese firms' innovation activities. In 2002, Chinese firms filed around 50,000 applications for invention patents (ranked seventh in the world), while in 2012, the number of applications increased more than tenfold and surpassed that of the United States, the European Union, and Japan, who are recognized as the most innovative economies in the world.

Given substantial variations in this uncertainty measure across industries, we adopt a difference-in-differences (DID) estimation approach for identification, as shown in equation (1):

where the dependent variable ln(PATENTijt) is the invention patent filings at the State Intellectual Property Office (SIPO) of China by Chinese firm i in industry j in year t. TPUj measures the TPU faced by industry j before the WTO accession. Post01t denotes the post-WTO period, which takes a value of 1 for the years from 2001 onward, and 0 otherwise. αi is the firm fixed effects, controlling for all time-invariant firm characteristics. We also control for a series of firm-level and industry-level characteristics. This estimation allows us to compare the patent filing behavior of manufacturers in industries experiencing greater uncertainty reduction (i.e., the treatment group) to that of manufacturers in industries experiencing less uncertainty reduction (i.e., the control group) before and after China's entry into the WTO in 2001.

The results in Table 1 show that uncertainty reduction significantly encourages patent applications: sectors with a larger reduction in uncertainty experienced faster growth in innovation after the WTO accession. Interestingly, reducing uncertainty not only induces innovation through expansion of the export market, but also exerts a direct effect on innovation. 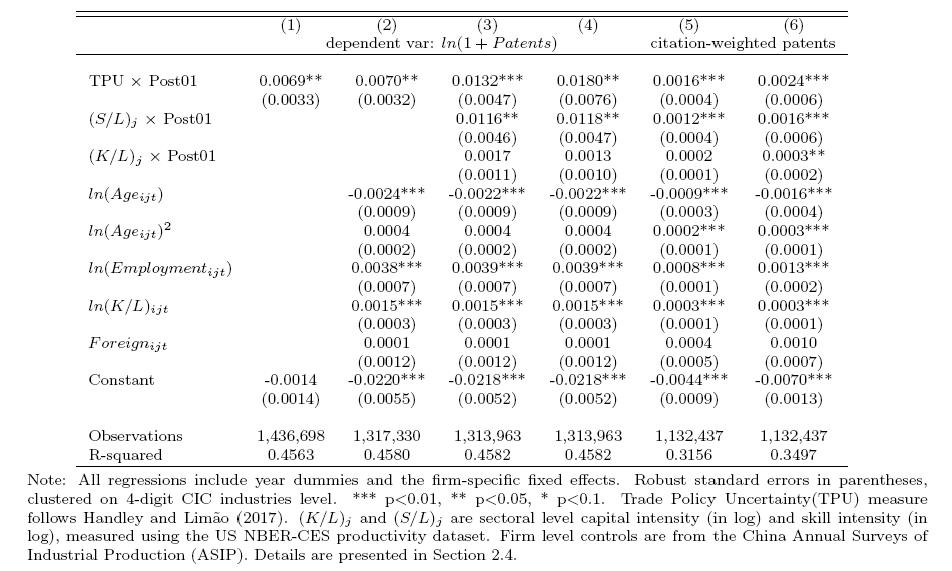 Our work suggests an important channel through which trade liberalization can stimulate innovation and ultimately promote economic growth. In a departure from existing studies, we directly connect firms' innovation incentives to their expectations about the market environment. The literature has emphasized that efficiency loss can be caused by market uncertainty. For instance, Bloom et al. (2007) document that stock market volatility leads firms to delay investment. We view TPU as an important source of market uncertainty and provide rigorous empirical evidence to show that the existence of TPU not only hinders export growth (as confirmed by the literature), but also discourages firms' investment in innovation. Our results are robust when we control for other determinants of innovation, such as domestic and import competition, input trade liberalization, and domestic reforms.

Moreover, we find that firms' responses to TPU reduction are heterogeneous, depending on their productivity, ownership, exporting status, and the irreversibility of investment. That is, the impact is stronger for firms closer to technology frontiers, for domestic firms than for foreign-invested firms, for exporters than for non-exporters, and for firms in industries with higher irreversible investment.

We examine possible channels through which TPU reduction affects innovation. First, studies on specific industries suggest a positive effect of expected market size on innovation (see, e.g., Dubois et al. (2015) on the pharmaceutical industry). Is the TPU effect completely captured by a market size effect? If so, we would expect the differential impact of TPU reduction on firms with different exposures to disappear once we control for firms' export volume. The results, however, show that the differential effect of TPU is still present after we have explicitly controlled for market size. Second, patenting can be viewed as the outcome variable of innovation, while expenditures on R&D, fixed capital investment on machinery and equipment, and imported inputs are considered the input variables of innovation. How would TPU reduction stimulate inputs in innovation? Our results show that TPU reduction significantly increases the treated firms' capital investment and imported inputs. We also find a stronger effect of TPU reduction in R&D-intensive sectors.

Our research implies that the current situation with worldwide surging uncertainty in international trade may harm firm innovation, which may dampen the worldwide long-run economic growth more than through the direct impact on trade.