Spillovers in Childbearing Decisions and Fertility Transitions: Evidence from China

To what extent and through which mechanisms are couples influenced by others when choosing their own family size? Recent research exploits exemptions in China’s family planning policies to show that conformism and competition drove the diffusion of small families, and hence accelerated the fertility transition in China. 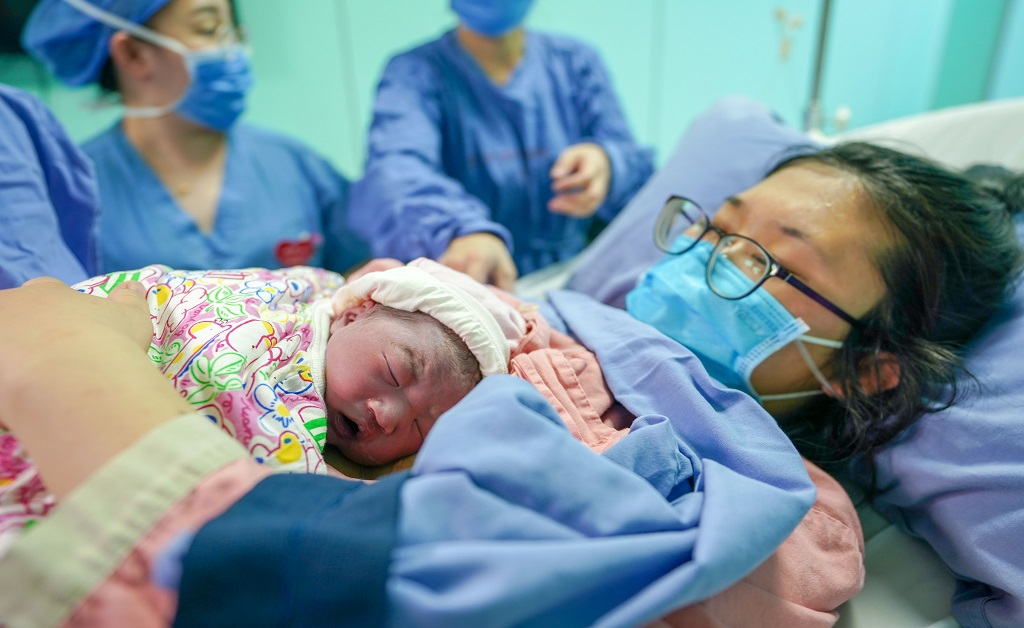 Among social scientists, there is a long-standing debate on the fundamental causes of fertility transitions. One prominent view is that fertility decline is related to economic development through changes in structural factors affecting the costs and benefits of having children (Becker 1991). This view has been challenged by scholars who argue that, historically, fertility decline starts at very different stages of development (Bongaarts and Watkins 1996). They propose that we think of small families as a cultural innovation that is gradually transmitted through social interactions. To reconcile both views, some theoretical studies have tried to combine the rational choice approach with social factors (Durlauf and Walker 2001, Munshi and Myaux 2006). The key insight from these models is that the interplay between incentives and norms is crucial for understanding the differences in historical transitions. Economic preconditions may be amplified or undermined by social interactions, so that the same change in one structural factor may trigger fertility decline in one social context and not in the other. Understanding when and why this happens is an important question that we address in the context of China in our recent paper (Rossi and Xiao 2020).

China’s family planning policies provide a unique setting to study to what extent and through which mechanisms couples’ fertility decisions are influenced by other couples (Li and Zhang 2009). Birth quotas were introduced in the early 1970s with the Later, Longer, Fewer (LLF) campaign, followed in 1979 by the stricter One-Child Policy (OCP). In contrast to the Han people, ethnic minority groups were exempt due to their small share in the total population and political considerations (Scharping 2013, 150) (See Note 1). These exemptions create an interesting empirical design: whether minorities respond to family planning policies and whether this response depends on the share of Han in the population is informative for peer effects.

We use a sample of over 725,000 Han women and 55,000 minority women born in 1926–1945 from the 1990 Chinese Census to study the spillovers in fertility decisions. Our empirical strategy is closely related to the one developed by Chen and Fang (2021), a recent study using the staggered adoption of the LLF campaign across provinces to document a strong causal effect on the fertility of Han Chinese. Specifically, we create a measure of policy exposure, capturing the expected reduction (ER) in fertility required to comply with the birth quotas. This measure captures the maximum reduction in Han fertility that we can expect for a given cohort in a given province if the policy were perfectly implemented relative to a hypothetical scenario in which fertility rates remained constant in the absence of the policy.

Ethnic minorities reduced their fertility in response to Han-targeting quotas

Figure 1a shows that ER in fertility for the Han is reflected in the evolution of actual fertility. The graph plots the average ER (black dots) and the average completed fertility (gray diamonds) of Han women cohort by cohort. Vertical red lines indicate the cohorts partially exposed to the LLF campaign and belonging to our main sample. Han women born before 1926 gave birth to slightly more than five children. Afterward, fertility started to decrease, especially quickly between the cohorts of 1930 and 1945, and reached two children for women born in 1960. The start and speed of the fertility decline coincided with changes in ER, increasing strongly during LLF and more slowly during OCP.

Although minorities were not targeted by family planning policies, their fertility also decreased during the period. This could be due to spillovers and/or because fertility decline was in fact driven by other forces affecting both Han and minority women. To disentangle these two explanations, we compare minority women living in places with different shares of Han. Figure 1b plots ER against fertility outcomes for minorities, looking separately at prefectures where the share of Han Chinese was above 60% (light gray diamonds) and below 60% (dark gray squares). The decline in the fertility of minorities started earlier and was faster in high Han-share prefectures. As a result, minority women in “high” prefectures had, on average, one fewer child than women in “low” prefectures among cohorts born after 1945. In contrast, for older cohorts born before 1926, fertility was higher in prefectures dominated by Han Chinese.

We confirm these descriptive results using a difference-in-differences strategy. We find that birth quotas cause a reduction in fertility of both Han and minorities. The fertility response of minorities was stronger when the local Han share was higher and was absent in places where Han did not live. This suggests that minorities reacted to a change in Han behavior and not to the birth quotas per se. Using the linear-in-means model of peer effects, we further estimate that a woman gives birth to 0.65 fewer children if the average completed fertility among her peers is reduced by one. This implies that the effect of population policies is amplified by a social multiplier of roughly three (= 1/(1-0.65)). 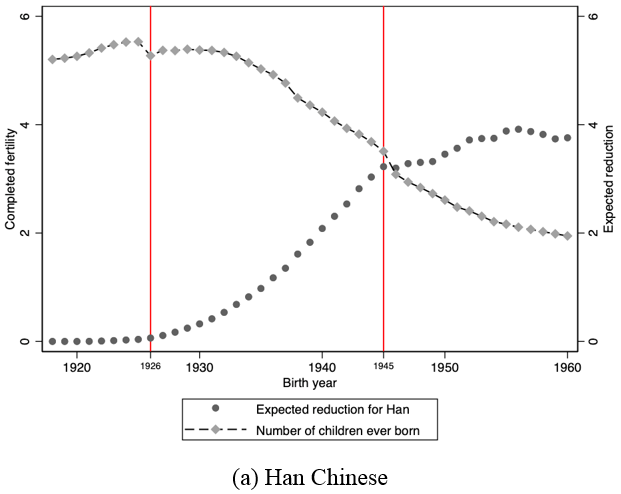 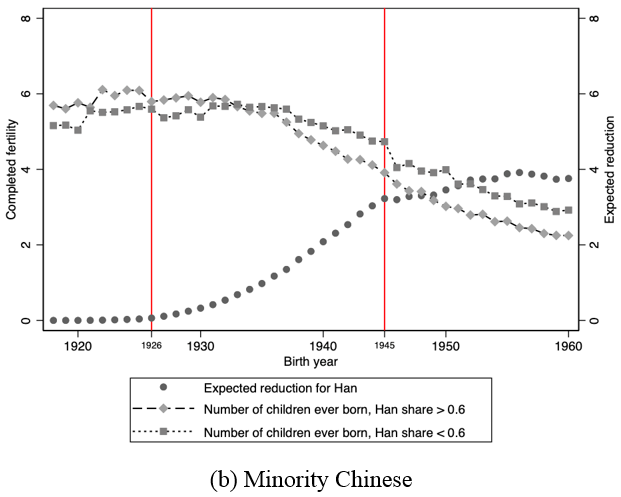 How to explain these large-scale spillovers in fertility decisions?

In theory, restricting the fertility of some couples can prompt other couples to reduce their number of births, either because they do not want to deviate from the average behavior (conformism), or because they want to keep up in terms of resources spent per child (competition). We take advantage of the fact that different ethnic groups are more or less integrated into the Han society to test whether these mechanisms are at play. We create indicators of (i) cultural integration based on linguistic distance and residential segregation between the Han and each group; and (ii) labor market integration reflecting how much each group competes with the Han for skilled jobs. We find that groups weakly integrated culturally and economically (e.g., Zhuang, Yi) do not respond at all to birth quotas, whereas groups strongly integrated on both dimensions (e.g. Man, Tujia) respond the most. Economic integration alone (Korea, Mongol) and cultural integration alone (Hui, Miao) generate a quantitatively similar response. We conclude that spillovers operate through both social and economic channels.

First, they confirm the general view that population policies played a key role in the Chinese fertility decline. The total fertility rate decreased from 5.7 children per woman in 1969 to 2.7 in 1978. Historians and demographers forged the concept of “induced fertility transition” to reflect the idea that population policies played a key role in this decline, particularly LLF (Zhang 2017). Our results confirm this view. Using estimates of the Han regression, we find that the average policy effect is a reduction by 0.8 births, accounting for half the decline in Han completed fertility during the period of analysis. Moreover, in the Chinese context, spillovers strongly magnified the policy impact. Economic and social interactions between couples generate a social multiplier, which helps us understand how LLF could trigger the fertility transition.

Our framework provides guidance to think about new policies. In 2016, faced with the challenges posed by an aging population, the Chinese government officially allowed all couples to have two children. Despite the abolishment of OCP in 2016, birth rates kept falling and reached their lowest level in 2019 (National Bureau of Statistics 2019). This is a concern for the government, which is concerned about the deterioration of dependency ratios. One explanation consistent with our findings is that China moved from a high fertility equilibrium to a low fertility equilibrium in response to the introduction of birth quotas, and is now in a low fertility trap. The government can get out of this low fertility trap by subsidizing second births. The main insight is that the subsidy, serving as a coordination device, does not have to be universal. The rise in fertility is predicted to endogenously propagate from the subsidy recipients to groups that are economically or culturally related.

Note 1: We could not find information on how the LLF policy was implemented for Han-minority couples. In our sample, 15% of minority women were married to a Han Chinese. We assume that these women were exempted from birth quotas. Our results do not change if we exclude them.