Chinese banks have become the largest cross-border lenders to emerging markets and developing economies (EMDEs). Despite their different ownership structure, their type of global reach resembles that of advanced economies’ (AE) banks, with distance to their borrowing EMDEs less of a barrier than that of other EMDE banks and more like U.S. or European banks. While bilateral trade, FDI, and portfolio investment positively correlate with lending for most banking systems, Chinese banks’ lending to EMDEs also strongly correlates with trade (e.g., in line with patterns exhibited by U.S. banks), but not with FDI and, unlike other banks, it correlates negatively with portfolio investment. 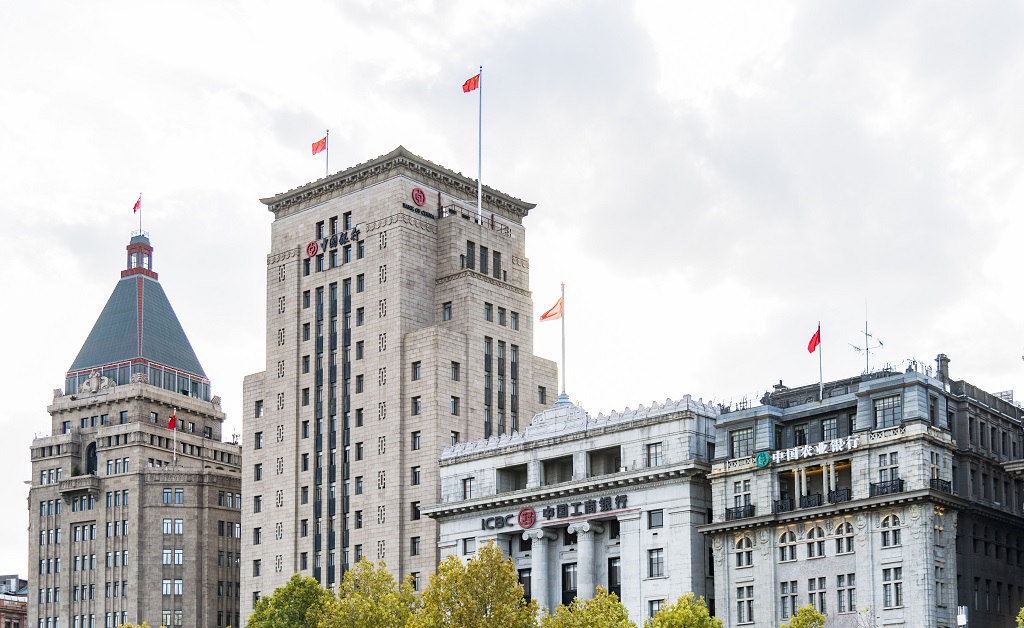 Since 2016, Chinese banks have constituted the largest banking system in the world; these banks have  substantial cross-border claims on emerging markets. While this top position among major global banking systems is mostly driven by their domestic activity, Chinese banks have also been expanding abroad at great speed (Cerutti and Zhou 2018). As of mid-2018, they represented about 7 percent of total cross-border bank lending and reported claims on 176 out of 185 borrower countries/jurisdictions according to BIS locational banking statistics (Table 1) (see Note 1). 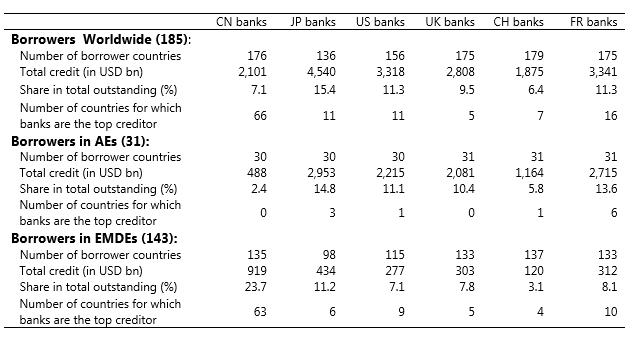 While Chinese banks have similar broad coverage of cross-border lending to EMDEs and AEs—they lend to 135 out of 143 EMDEs and to 30 out of 31 AEs—their volume of lending is more focused on EMDEs. Not only do they have a higher share (about 45 percent) of their global cross-border claims on EMDEs borrowers than other banking systems, but their claims (about USD 919 billion) are also more than half that of other banking systems (e.g., Japanese banks’ cross-border claims on EMDEs are about USD 488 billion). Moreover, 63 EMDEs already borrow more from Chinese banks than from any other bank nationality, highlighting that even though they are very small relative to their domestic claims, Chinese banks’ foreign claims are substantial, especially for many borrowing EMDEs.

Even though lending by Chinese banks has decelerated since 2016, their market share in cross-border bank lending to EMDEs has been increasing—even during the COVID-19 crisis—and reached 26 percent of the total in the second quarter of 2020 (Figure 1). While the largest share of Chinese banks’ lending is to Asian-Pacific borrowers, at about 38 percent, their share of African and Middle Eastern borrowers is about half of that at 19 percent. The shares for Eastern European and Latin American EMDE borrowers are about one-half and one-third of those for African and Middle Eastern borrowers, respectively. In terms of being the main lender, 28 of the 63 EMDEs that borrow more from Chinese banks than from any other bank nationality are in Africa and the Middle East, 22 are in Asian-Pacific countries, eight are in Latin America, and five are in Eastern Europe. 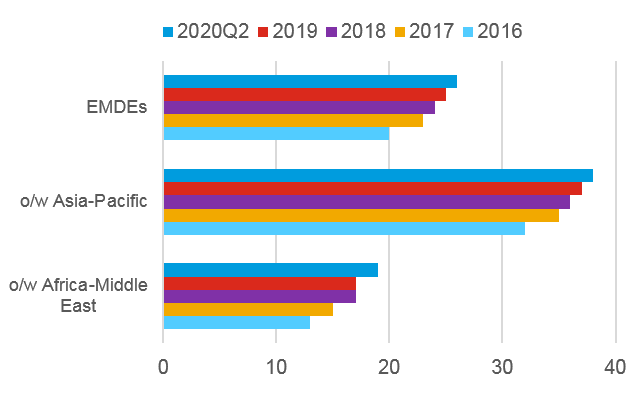 These estimates are calculated taking into account the global network of foreign affiliates since, as highlighted by Cerutti, Koch, and Pradhan (2018), this is key to understanding international banks’ global presence. Only about 60 percent of all bank nationalities’ cross-border lending is extended from their home country. Like most other banking systems, a substantial part of Chinese banks’ cross-border lending originates from affiliates operating outside the Chinese mainland. Banks lend across borders with loans booked either from the home country of their headquarters or from lending by their affiliates (branches or subsidiaries) located abroad (either in financial centres or third countries/jurisdictions) (see Note 2).

The specialization of Chinese banks in EMDEs borrowers could indicate that their geographical distribution of cross-border claims is associated with different factors other than AE and EMDE banking systems. Not only is the cross-border expansion of Chinese banks more recent than AE banks, but the Chinese banking system is predominantly state-owned (see Note 3). This latter aspect could, in principle, favour China-specific policy initiatives like the Belt and Road Initiative (BRI), which is a long-term policy and investment program that focuses on infrastructure development and accelerating the economic integration of about 140 countries with China.

Our results suggest that Chinese banks are different to other banking systems in some dimensions, but much less so than we would have expected without conducting a careful comprehensive analysis. Chinese banks seem to perceive distance (a proxy of information asymmetries) to their borrowing EMDE as less of a barrier than other EMDE banks, and behave more like U.S. and European banks. In general, their type of global reach to EMDEs resembles that of AE banks.

With respect to bilateral economic factors, as expected, Chinese banks’ positive correlation between cross-border bank lending and trade with EMDE countries stands out. It is much stronger than the trade-lending relationship exhibited by Japanese and European banks, but it is more in line with patterns exhibited by U.S. banks. This strong positive correlation between bilateral trade and Chinese cross-border lending even prevails when considering the BRI or bilateral currency swap arrangements between the People’s Bank of China and other central banks.

Our findings provide some interesting policy implications. The growing international footprint of Chinese banks and their G-SIB status highlight the importance of understanding their global operations and business model. Their operations are not very different to AE banks, but the strong positive correlation of Chinese banks’ cross-border lending with bilateral trade, and their unusual current negative correlation with portfolio investment in EMDEs (resulting from China’s low portfolio investments outside a few AEs) could interact with some ongoing macroeconomic trends. On the one hand, a prospective reduction in global trade (e.g., resulting from the shortening of value chains due to trade tensions and/or the impact of the COVID-19 virus) could be associated with a decline in Chinese cross-border bank lending, especially to EMDEs. On the other hand, the ongoing and planned liberalization reforms in the Chinese bond market could foster further inward and outward portfolio investment. If the liberalization of portfolio investment makes China more similar to other AE and EMDE countries, Chinese banks’ investments abroad could surge in an attempt to further diversify. This could lower information asymmetries for Chinese cross-border bank lending.

Note 2: About one-quarter of Chinese banks’ cross-border lending to EMDEs originates from affiliates operating outside the Chinese mainland, Hong Kong SAR, Macao SAR, and the Taiwan Province of China

Note 3: State ownership of banks remains dominant in China (Hawkins and Mihaljek 2001). Even though the state ownership share decreased for all types of banks in China from 2007 to 2012, the central government have firm control over state-owned banks (Zhang et al 2020), which are the largest banks in the Chinese banking system.

This article is mostly based on Cerutti, Koch, and Pradhan (2020). The views expressed in this article are those of the authors and do not necessarily reflect those of the BIS or the IMF.