I study the causal effects of South Korea’s baby bonus on fertility by exploiting temporal and spatial variation in pro-natalist cash transfers provided to families with newborn babies. Based on registry records spanning the universe of births from 2000 to 2015, I find that the baby bonus increased completed fertility: in the absence of the policy, the total fertility rate in 2015 would have been lower by 3%, which is equivalent to 450,000 fewer babies born to the 2015 female population over their lifetimes. The baby bonus was partly responsible for correcting the sex ratio favoring boys. I provide evidence that the cash incentives were particularly valuable among working mothers. Their selection into childbearing explains lower health outcomes on average. 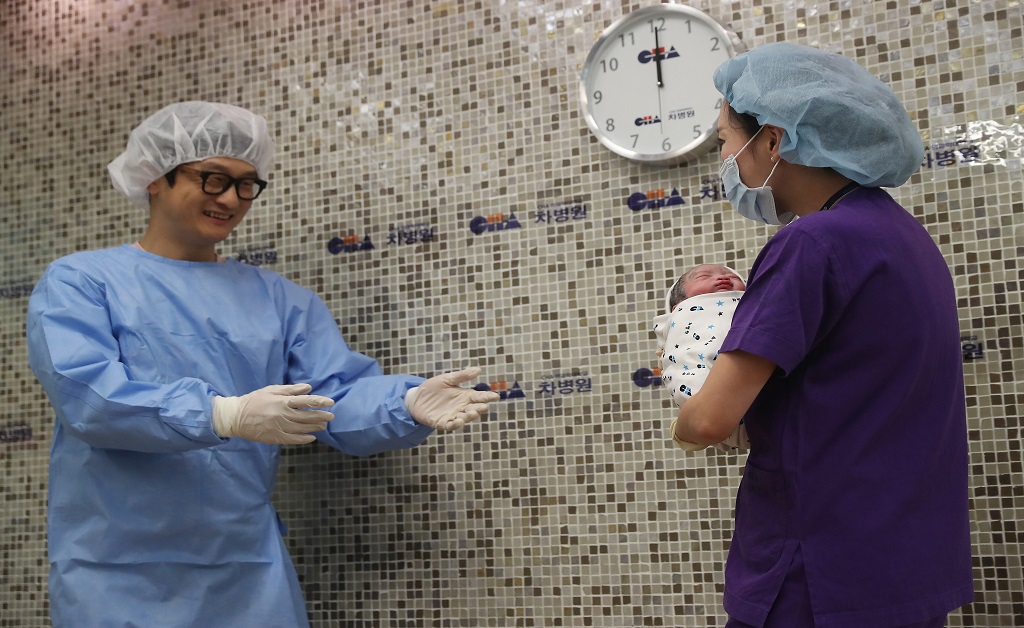 A high fertility rate of more than six children per woman in China during the 1960s quickly dropped and stayed below the replacement level of 2.1 since the early 1990s, thanks to China’s “Later, Longer, Fewer” campaign and the one-child policy (Chen and Fang, 2018). This unique family planning policy is partly responsible for lowering the total fertility rate and increasing the male-to-female ratio, favoring boys, at birth (Ebenstein, 2010) (see Note 1).  The one-child policy was repealed in 2015, but there is no sign of recovery  to the replacement level.

South Korea—a country neighboring China—shares a similar experience. Its government carried out one of the most successful family planning policies during the 1960s and 1970s. The total fertility rate has stayed below the 2.1 replacement level since 1983, and an unnaturally high male-to-female ratio at birth persisted (Yoo et al., 2016). In 2001, local governments started providing a baby bonus, a pro-natalist policy giving cash transfers to families with newborn babies (see Note 2). The generosity of the cash transfers differed widely by birth order, across districts, and over time. Depending on where a family lived, when they had their baby, and the birth order of that baby, the family would receive a different bonus amount. By 2015, 44%, 88%, and 100% of districts had adopted the baby bonus for the first, second, and third child, respectively (see Note 3).

In Kim (2020), I study whether this pro-natalist financial incentive increased birth rates and changed neonatal health outcomes that shape the children’s long-run outcomes. The main empirical strategy compares the birth outcomes across districts in which residents with newborn babies were “treated” with varying implementation timing and amount of cash transfers while holding all other determinants of birth outcomes constant. I construct district-level, age-specific birth rates for each birth order (first, second, and third) based on the birth registry records spanning the universe of births from 2001 to 2015. These records contain information on individual health outcomes (birth weight, gestational age, and sex).

My paper has three broad results:

Figure 1: Birth Rates Before and After the Implementation of Baby Bonus

Note: This event-study figure plots the changes in the birth rates before and after pro-natalist cash transfer policy implementation for the first child (left), second child (center), and third child (right). Each observation corresponds to a district-year pair and is weighted by the female population between the ages of 15 and 49. Across each panel, the same set of fixed effects (i.e., district fixed effects and city-by-year fixed effects) and district-level control variables are included. The control variables include the log of the total population, percentage of the female population, the percentage of the adult population (between the ages of 20 and 64), the percentage of the elderly (older than 64), the net migration rate (total inflow-outflow normalized by population), marriage rate, indicators for the gender and political party affiliation of the local government head, and the financial independence rate. In addition, the estimations for the second child (he third child) include the lagged number of births for the first child (the first and second child). Error bars show 95% confidence intervals. Standard errors are two-way-clustered at the district level and city-by-year level.

Both birth weight and gestational age were affected by the baby bonus. Based on the individual birth records, I find that the baby bonus lowered the gestational age of the second and third children. Further investigation based on parental information available in the birth records reveals that these cash transfers are more valuable among employed mothers, especially when they were trying to have a second or third child. Their selection into childbearing lowers gestational age because these mothers tend to have a shorter pregnancy durations due to time constraints than mothers who are not working. On the one hand, this decrease led to a reduction in birth weight due to a strong positive correlation between birth weight and pregnancy duration. On the other hand, holding gestational age constant, the cash transfers increased birth weights. I find that a $1,000 increase in cash transfers leads to an increase of 9.01 grams and 3.06 grams in birth weight among second and third children, respectively (see Note 6).

Notes: This table reports the fraction of male births for the first, second, and third child for every three years from 2000 to 2015 based on the universe of confidential birth registry records. Standard errors are reported in parentheses.

The male-to-female ratio at birth reached the natural level of 105 boys per 100 girls (or a fraction of male births equal to 51.2%) among third children in 2015, thanks to the baby bonus. As shown in Table 1, the sex ratios among the first and second children were already at the natural sex ratio. The sex ratio among the third child in 2000 was 142 boys per 100 girls (or 58.7% boys) and gradually declined to the natural sex ratio in 2015. I formally investigate through a regression framework how much of this decline in the sex ratio is due to the baby bonus (see Note 7). Table 2 reports the results. Across columns, the estimated coefficients in front of second and third children indicate how much more likely it is that the second and third children are boys relative to the first child. In column 1, the estimated coefficient for cash transfer is negative and statistically significant at the 0.1 significance level. I allow the effect of the baby bonus to differ by birth order in column 2. The effect is concentrated among the higher-order births, especially the third child. The baby bonus compensates for a utility penalty associated with having a daughter. Based on these results, I compute that the sex ratio among third children born in 2015 would have been 114.3 boys per 100 girls. From 2000 to 2015, the sex ratio decreased by 37 boys, and about a quarter of this change is due to the baby bonus.

Table 2: The Effect of the Baby Bonus on Sex Ratio 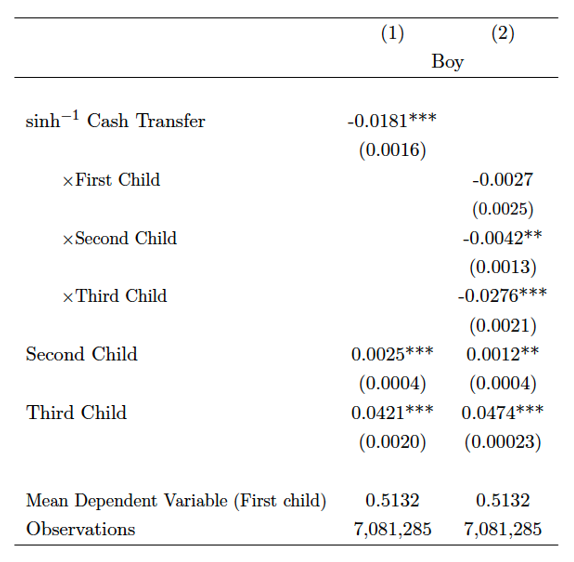 Notes: This table reports the estimated effects of cash transfers on the indicator for boys. The first column reports the estimated effects of cash transfers unconditional on birth parity; in the second column, the cash-transfer effects are allowed to differ across birth parity. Each observation corresponds to a birth and the total observations span the universe of births in South Korea from 2000 to 2015. The average number of male children per 100 female children is 105.4 for first children, 105.9 for second children, and 120.9 for third children. Across columns, the same set of fixed effects (i.e., district fixed effects and city-by-month fixed effects) are included; the parental characteristics are controlled for: there are dummy variables for mother's and father's educational attainment level (no schooling, elementary school, middle school, high school, some college or above), age, occupation, and marital status. The district-level control variables include the log of the total population, the percentage of the female population, the percentage of the adult population (between the ages of 20 and 64), the percentage of the elderly (older than 64), the net migration rate (total inflow-outflow normalized by population), marriage rate, indicators for the gender and political party affiliation of the local government head, and the financial independence rate. Standard errors, two-way-clustered at the district level and city-by-month level, are reported in parentheses: * Significant at the 5 percent level, ** Significant at the 1 percent level, and *** Significant at the 0.1 percent level.

In Kim (2020), I investigate the effects of the baby bonus in South Korea. I find that the bonus increased completed fertility, that financial assistance is particularly valued among working mothers, and that the baby bonus has the unintended consequence of correcting the skewed sex ratio. With policies such as parental leave and improved access to childcare, financial incentives can be even more effective in encouraging childbirth. Designing an effective pro-natalist policy package requires future research to understand how different policy options (e.g., baby bonus, parental leave, and improved access to childcare) interact.

Furthermore, a decision to have children depends on the cost of raising them and their expected future outcome as well as the upfront cost, which the baby bonus discussed here lowers. Recent increases in the cost of education and house prices among other increases in both South Korea and China have made it difficult for families to afford babies. A comprehensive policy providing affordable housing options for families and educational and economic opportunities to future generations is warranted to successfully increase fertility.

Note 1: Zhang (2017) provides a detailed summary of family planning policies in China and surveys the empirical papers investigating the effects of the one-child policy on family outcomes. Anukriti (2018) shows that a family planning policy in India reduced fertility, but intensified son preference, resulting in a higher male-to-female sex ratio at birth.

Note 2: The smallest administrative unit with an elected government head is called Si, Gun, or, Gu, which I refer to as a district. I consider 222 contiguous districts that contain more than 95% of the South Korean population. These districts comprise 15 cities. For example, Seoul is a city with 25 districts.

Note 5: The results are robust to spatial sorting because my empirical strategy controls for the stock of eligible households each year. Based on the universe of migrant records that contains information on where households move from and to and family composition, I estimate a gravity equation and find that potential beneficiaries migrate into districts offering more generous baby bonuses. See Kim (2020) for more details.

Note 6: The magnitudes of these effects are consistent with Hoynes et al. (2015), who find that an increase in income of $1,000 leads to an increase in birth weight by 6.4 grams in the United States. Matching the birth records to death records, I find no evidence of changes in the early-life mortalities rates due to the baby bonus.

Note 7: I use a linear probability model using birth registry records and estimate the effect of cash transfers on the probability that a family has a boy. I introduce a rich set of family-level control variables and fixed effects that will capture any time-invariant, district-level characteristics and month-to-month changes in city-level characteristics. The fixed effects will particularly purge the effect of changes in son preference shared among families in each city.

Ebenstein, A (2010), “The ‘Missing Girls’ of China and Unintended Consequences of the One Child Policy,” Journal of Human Resources 45(1).

Zhang, J (2017), “The Evolution of China’s One-Child Policy and Its Effects on Family Outcomes,” Journal of Economic Perspectives 31(1).