China’s unprecedented and unexpected loosening of loan-to-value ratio (LTV) policy during 2014Q4–2016Q3 provides an ideal case to study the role of housing policy in housing booms and busts and its impacts on consumption and debt burdens among households. Evidence from three unique micro datasets shows that such a policy change disproportionately increased the share of mortgages to middle-aged and high-income homeowners in the total amount of newly issued mortgages and at the same time reduced their consumption growth persistently. Homeowners traded up their primary homes as their speculative housing investment. This trade-up was a key channel for a change in LTV policy to exert aggregate and distributional impacts on mortgage markets. 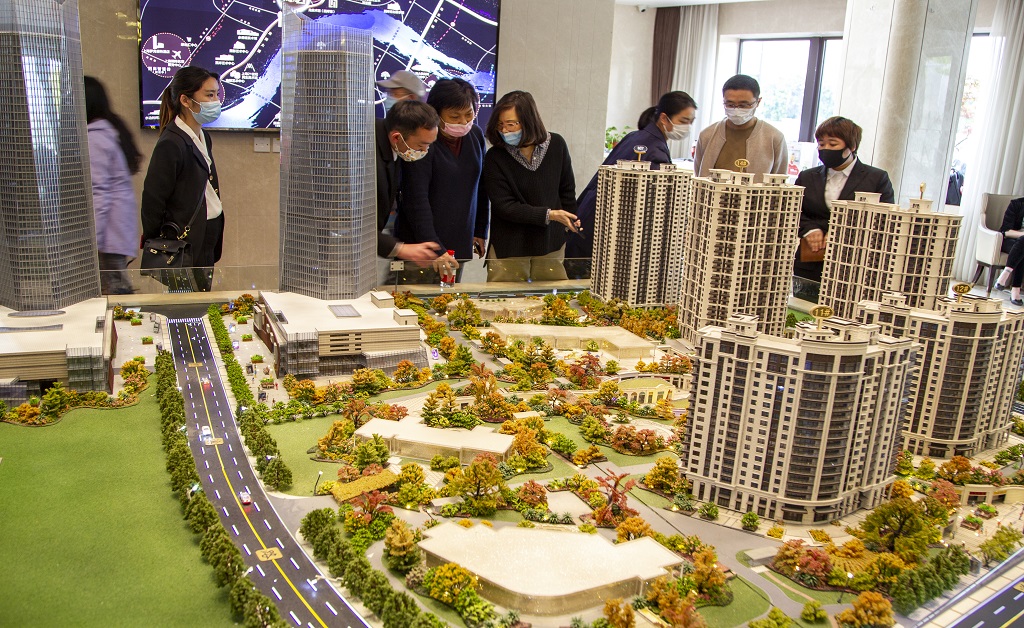 The COVID-19 pandemic in 2020 propelled the world into a deep recession. In China, however, the duration of this recession was transient, and recovery was driven by rapid growth of sales of residential properties since May 2020. In August 2020, the year-over-year nationwide growth rate peaked at 30%, making real estate a bright spot of growth and recovery. In first-tier cities like Shenzhen and Shanghai, there has been a new fever in the market for newly built properties. This housing boom caused policymakers to tighten regulations on the housing market during the second half of 2020. What is the role of housing policy in housing booms and busts? How do housing regulations affect consumption and debt burdens across households? Researchers have explored many issues related to the real estate market from both empirical and theoretical perspectives (see, for example, Fang, Gu, Xiong, and Zhou 2015; Wu, Gyourko, and Deng 2016; Glaeser, Huang, Ma, and Shleifer 2016; Chen and Wen 2017; and Chen, Liu, Xiong, and Zhou 2019. The impacts of housing policy on the real estate market and household finances, however, are an important topic that is largely unexplored, partly because there are no large changes in housing policy observed in many countries and partly because there is a lack of comprehensive data on how households finance their mortgages and consumption.

In Chen, Wang, Xu, and Zha (2020), we use China’s loan-to-value ratio (LTV) policy and in particular a relaxation of this policy during 2014Q4–2016Q3 as a case study to address the aforementioned questions. LTV policy was changed by an unprecedented and unexpected reduction in the minimum down payment ratio of non-primary houses from 60–70% to 30%. The intent of this policy was to resolve overstocked housing markets created by China’s monetary and fiscal stimulus in 2009. During this period, however, the annualized growth rate of real house prices across 70 major Chinese cities was, on average, 5.94% higher than in 2011Q1–2014Q3 (for first-tier and second-tier cities, it was 8.84% higher), and the average annual newly issued mortgage amount for these cities was 92% higher than in 2013. Meanwhile, the growth rate of aggregate consumption has declined since 2014Q4, and the decline continued even after the loosening of LTV policy was reversed in 2016Q4 (Figure 1). 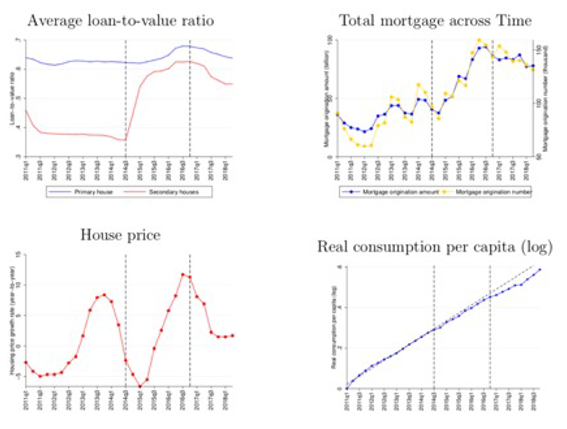 We exploit three unique micro datasets: a proprietary loan-level dataset for mortgage originations in one of the largest Chinese commercial banks, the China Household Finance Survey conducted by Southwestern University of Finance and Economics, and monthly city-level consumption data from China UnionPay Merchant Services Corporation. A combination of these datasets enables us to establish the following key findings:


(1) the loosening of LTV policy for non-primary houses fueled the entire mortgage boom during 2014Q4–2016Q3;


(2) the mortgage expansion disproportionately increased the share of mortgages to middle-aged and high-education homeowners in total newly issued mortgages (in terms of both the amount and the number of originations), while their consumption growth declined persistently;


(3) and homeowners traded up their primary homes as speculative housing investment—a key channel for a change in LTV policy to exert aggregate and distributional impacts on mortgage markets.

To study how a relaxation of LTV policy during 2014Q4–2016Q3 drove mortgage demands of households of different ages and income levels, we exploit proprietary mortgage loan level data from one of the largest banks in China, which covers all mortgage loans for purchasing new residential properties between 2011Q1 and 2018Q2. During the LTV policy relaxation period, middle-aged households with high education were the only age-education group whose mortgage share increased substantially, by 13.32% in the loan amount and 8.07% in the number of originations. By contrast, the mortgage share of other age-education groups declined substantially. Although the maximum LTV ratio barely changed for primary houses during this period, this reallocation was mainly driven by reallocation of mortgage credit to primary houses. This reallocation led to a significant increase in the ratio of mortgage debt to income for households who had outstanding mortgage debt prior to the housing boom (intensive margin) and a high mortgage participation rate (extensive margin), as shown in Figure 2.

Most homeowners in this middle-aged and high-education group did not purchase secondary houses. The intended policy shock on secondary houses, therefore, had indirect impacts on the market of primary homes, as the initial increase in the house price driven by an increase in demands for secondary houses generated capital gains for existing homeowners and encouraged them to trade up existing primary homes in anticipation of further capital gains in the future. These indirect (and unintended) impacts, facilitated by the speculation of higher house prices in the future, turned out to be a major driving force of the mortgage boom in response to the change of LTV policy.

To assess empirically the impacts of the mortgage boom on consumption growth, we use biannual China Household Finance Surveys from 2011 to 2017. There are three key empirical findings.

Second, within this age-education group, consumption growth of homeowners fell by 3.61% even though their incomes increased by 5.25%, while there was no evidence of a decline in consumption for renters.

Much of the increase in mortgage demands and the decline in consumption growth among middle-aged homeowners with high education was due to speculation on the return of housing investment. To establish this evidence, we exploit cross-city variations in their exposures to housing speculations. Following Gao, Sockin, and Xiong (2020), we measure a city’s exposure to housing speculation by the share of mortgages to non-primary houses in all mortgages in 2013, the year prior to the loosening of LTV policy. During the period of loose LTV policy, cities with high exposure experienced more rapid increases in their house prices, total mortgages, and the mortgage share of middle-aged households with high education than cities with low exposures. These differences diminished after the relaxation of LTV policy was reversed.

Consumption in high-exposure cities decreased steadily relative to consumption in low-exposure cities during the period when LTV policy was relaxed and continued to decline even after the policy relaxation ended. This city-level evidence supports a theory that housing speculation played a key role in fueling the mortgage boom and at the same time reducing non-housing consumption during 2014Q4–2016Q3 when LTV policy was drastically loosened.

All these empirical findings can be explained by a life-cycle equilibrium model with heterogeneous households. The model uncovers a self-reinforcing mechanism via changes in the house price: a reduction of the minimum down payment ratio for secondary houses triggers an initial rise in the house price by encouraging investment in houses for speculative purposes; the initial rise, in turn, generates capital gains for existing homeowners and encourages them to trade up existing homes in anticipation of future capital gains. Growth of non-housing consumption of middle-aged households with high incomes falls partly because of their intertemporal substitution into future consumption and partly because of the increasing burden of mortgage debt relative to income. This self-reinforcing mechanism is in sharp contrast to the standard mechanism in other models in the literature. In those models, changes in credit conditions affect aggregate housing demands mainly through housing tenure decisions made by households who are credit constrained for housing services, not for housing investment.

The loosening of LTV policy during 2014Q4–2016Q3 and the resultant mortgage boom, although transitory, had persistent effects on the slowdown of consumption because the rising mortgage debt burdens were born by middle-aged and high-income homeowners. Recent developments in China bear witness to the valuable lesson we have learned from China’s 2014Q4–2016Q3 experiment. Total retail sales of consumer goods for the first 11 months of 2020 declined by 4.8% from the same period the previous year, while home building increased by 7% for the same period. To promote growth of household consumption, policymakers should be mindful of the crowding-out effects of rising house prices and rising mortgage debts on a wide class of homeowners.

With continuing urbanization while financial markets are still underdeveloped, speculative investment in houses will likely be an important driver of households’ housing demands, despite various administrative means to contain such demands. In its fourteenth five-year plan of national economic and social developments, the Chinese government has stated that one of its long-term goals is to boost domestic consumption as a lever for the development of the whole economy. Against this backdrop, future housing policy for regulating the housing markets should take into account households’ expectations of the profitability of housing investment and how these expectations would negatively affect consumption growth.