Industrial Clusters, Networks, and Resilience of Firms to the Covid-19 Shock in China

Both entry of new firms and performance of incumbents were less adversely affected by the Covid-19 shock in Chinese counties with a greater presence of industrial clusters. To explain these results, we find evidence of the role of two specific attributes of clusters: reliance on informal hometown-based entrepreneur networks and spatial proximity to suppliers and customers. 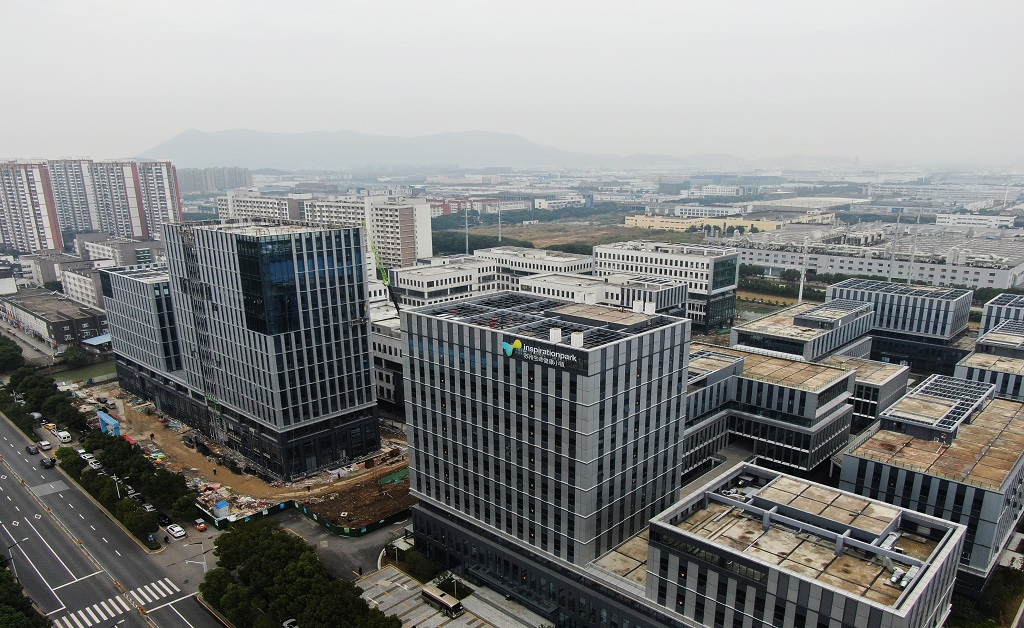 Production clusters occupy an important role in industrial organization in China and many other developing countries. Production clusters, which are geographic concentrations of small and medium enterprises (SMEs) in similar or related industries, are frequently characterized by a high degree of specialization in different stages of production, low capital intensity, and strong buyer-seller networks. Entrepreneurs extend trade credit to one another and share tools, information, and infrastructure based on informal cooperation among social networks organized based on birthplace, ethnicity, or caste. In contrast, in high-income countries, it is more common for industrial organizations to feature high vertical integration, capital intensity, great distances from suppliers and customers, and reliance on formal market contracts rather than informal networks.

Many authors have viewed the importance of relational contracts, trade credit, and community enforcement in clusters as a form of second-best adaptation in environments with pervasive market imperfections, weak states, and poor judicial institutions. These clusters often account for a thick bottom tail in LDC firm size distributions, which coexist with larger firms characterized by greater vertical integration, capital, and export intensity. Comparisons of productivity and growth across different categories of firms have been extensively studied in recent macro-development literature on misallocation. Much less is known about how well firms manage to cope with external shocks to profitability.

Our recent paper (Dai et al. 2020c) attempts to fill this gap, using firm data from China to assess the relative resilience of clusters with respect to the recent Covid-19 shock. We use two distinct data sets. The first covers registration of new firms in the entire country, including small, medium, and large enterprises. The second is a longitudinal enterprise survey for innovation and entrepreneurship in China (ESIEC), which is largely representative of the size distribution of firms in China. The survey is based on two phone surveys conducted in February and May 2020 (Dai et al. 2020a).

The Covid-19 shock arrived on the eve of the Chinese New Year in late January 2020, resulting in a severe lockdown in some parts of the country with high infection rates (Fang et al. 2020). The pandemic eased by early April, resulting in a gradual lifting of the mobility restrictions thereafter. While the Covid-19 infection rates may have directly impacted some entrepreneurs and workers who fell ill, the mobility restrictions imposed on the rest of the population and on the movement of goods had wider impacts. For China as a whole, the data show a sharp (approximately 70%) reduction in entry flows of new firms in the latter half of February 2020 compared to entry rates at the same time in previous years and an effect of the same order of magnitude on the number of incumbent firms reopening after the New Year. Dai et al. (2020a) find 79% of incumbent firms were shut at the end of February. These rates were substantially higher than temporary shutdown rates (43% on average) in the United States between late March and early April (Bartik et al. 2020).

We use the Ruan-Zhang (2015) measure of clustering in a given county, based on co-location of firms from “related” industries using a SIC3 classification and firm-level data from the 2008 China Economic Census. Cluster measures change little over time; hence, the results are robust to cluster measures based on firm registration data in 2008, 2004, and 1995.

We first show that the impact of Covid-19 on both entry and functioning of Chinese firms was significantly lower in counties/industries with a higher cluster index, after controlling for industry and time (month and year) dummies. Figure 1 shows estimated interaction coefficients (and 95% confidence intervals) between month dummies and a 2020 year dummy in a regression of per capita entry rates for new firms, separately by high (above median clustering) and low (below median clustering) counties, after controlling for year, month, county, and industry dummies.

Figure 1: Coefficients of interactions between each month and year 2020 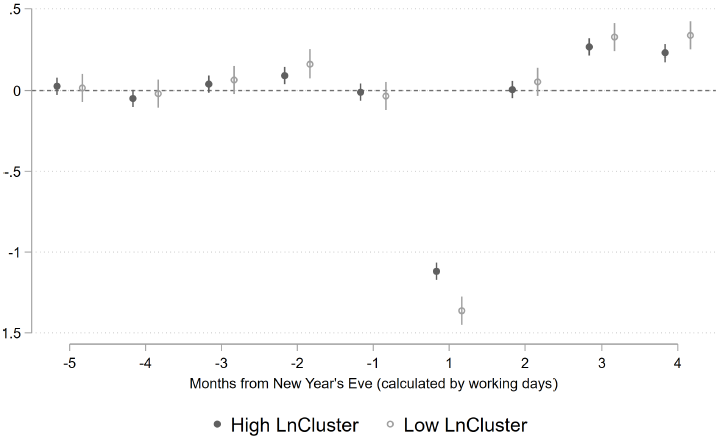 Counties with an above-median cluster index featured a 67% reduction in entry (i.e., the new firm registration) rate during the month immediately following the Chinese New Year compared to previous years, compared to a 74% reduction in counties with a below-median cluster index. A one standard deviation increase in the cluster index was associated with a 12% rise in the entry rate. These results are robust to alternative specifications (at the weekly rather than monthly level) and controls for local infection rates.

Similar results also appear for the functioning of incumbent firms from the entrepreneur phone surveys: a 1% rise in the cluster index was associated with a .05%–.07% higher likelihood of reopening in February after the New Year, and a .03–.04% higher likelihood in May, after controlling for local infection rates and industry dummies. We find evidence of a direct adverse impact of Covid-19 infections: higher local infection rates were associated with lower entry rates and reopening likelihood among incumbents. But despite their higher infection rates, counties with higher clustering were less adversely impacted.

These results for China contrast with findings from developed countries. Behrens et al. (2020) study resilience of Canadian textile industries to external shocks between 2001–2013, and fail to find much evidence that clusters were more resilient. Martin (2013), who  studied reactions of French exporting firms to the 2008–2009 crisis found firms in clusters were less resilient.

Our study subsequently examines  the role of different attributes of industrial clusters in explaining their greater resilience in China. In particular, we disentangle the role of two specific attributes: reliance of clusters on high-density hometown entrepreneur networks and benefits from greater spatial agglomeration.

To assess the role of hometown networks, we build on the earlier analysis of Dai et al, (2020b), which showed that the 1982 population density of rural counties is a good proxy for entrepreneurial network quality (measured by local trust and frequency of social interactions  within the hometown, and cross-ownership of firms by entrepreneurs from the same hometown). They also showed that between 1990–2009, entrepreneurs from  rural counties with a high population density achieved: (i) higher levels and growth rates of entry, (ii) a smaller average but larger dispersion in firm size at the time of entry, and (iii) higher post-entry growth rates.

We first verify a close connection between clusters and networks: high-cluster regions contain a larger proportion of entrepreneurs from fewer hometowns, and these common hometowns have higher population densities. We then show that counties with entrepreneurs originating from hometowns with higher density experienced a smaller contraction in rates of registration of new firms following Covid-19. Therefore, referrals and informal cooperation within high-density entrepreneur networks partly help explain why entry of new firms was less adversely affected in high-cluster areas.

On the other hand, opposite results obtain when we examine effects on incumbents: entrepreneurs from high density networks that had already entered prior to January 2020 were less likely to remain open in February and May 2020. These results are consistent with the theory of Dai et al. (2020b), who  explained why strong connections in high-density networks help facilitate the entry process, even for less productive entrepreneurs — thereby generating a form of adverse selection of entrepreneurial ability at the bottom end of the size distribution. This is the reason for their finding (ii) above concerning lower average size and greater dispersion in entering firm size. It corresponds to a longer left tail of the firm size distribution, which is more vulnerable to adverse profitability shocks.

These results imply that attributes other than network density must explain why incumbent firms were less likely to remain shut after the Covid19 shock. Using the ESIEC survey data, we find greater spatial proximity to suppliers and buyers (including online sales) was associated with a higher re-opening rate among incumbents. This meant fewer disruptions in supply chains and in  customer connections. Overall, the results therefore suggest that higher levels of both network quality and spatial agglomeration help explain the superior resilience of clusters.