Clean Air as an Experience Good in Urban China

If clean air is a valued experience good, then the short-term reduction in pollution in the spring of 2020 due to the COVID-19 shutdown could have persistent medium-term effects on reducing urban pollution levels as cities adopt new “blue sky” regulations to maintain recent pollution progress. Using data from 144 cities in China, we find that the largest experience good effect should take place for cities featuring a high pollution-sensitive population and where air quality has sharply improved during the pandemic. The residents of these cities have increased online discussions focused on environmental protection, and local officials are incorporating “green” industrial subsidies into post-COVID stimulus policies. 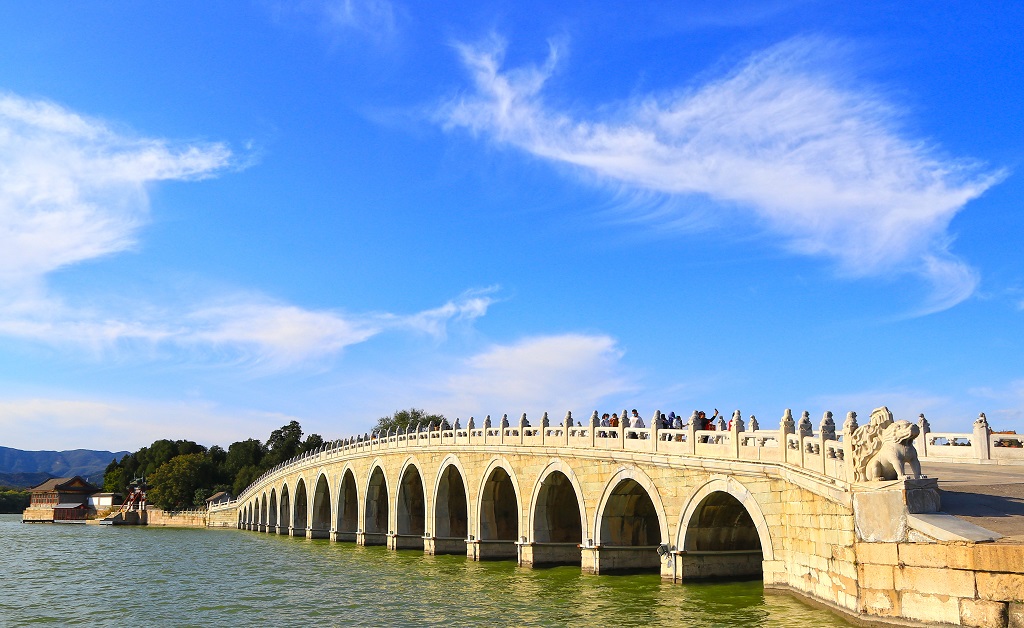 In early 2020, urban air pollution declined in China due to the economic shutdown induced by COVID-19 (He et al. 2020). A silver lining of this shutdown has been that previously very dirty cities have experienced blue skies. According to our calculations based on official air quality data, in the first three months of 2020, the PM2.5 concentration in 285 Chinese cities declined by 11.9% (with a standard deviation of 18.1%) relative to the same period in the previous year. Some cities, such as Baoding and Xingtai in Hebei Province, experienced huge reductions in air pollution, with declines of 26% and 29% respectively from their previous high pollution levels (about 80 μg/m3 in this period in previous years).

In our recent paper, “Clean Air as an Experience Good in Urban China” (NBER Working Paper No. 27790), we posit that clean air is an experience good. As urbanites from polluted cities experience cleaner air, they learn about how they gain from this local amenity improvement, and they demand that their local government introduce  new policy and regulatory steps to ensure that environmental progress continues even as the local economy recovers. Our paper presents new evidence on each of these claims.

Our core hypothesis stands in contrast to the standard prediction based on a stationary Environmental Kuznets Curve (EKC). The EKC hypothesis posits that if a developing country economy experiences a “V” shaped economic recovery, pollution will follow similar dynamics and may even rise with ongoing economic growth (Grossman and Krueger 1995). A local official in a city in a developing country might even choose to relax environmental regulations during an economic slowdown if he or she believes that such regulations hinder economic growth (Selden and Song 1995).

The clean air as an experience good hypothesis posits that the demand for increased regulation will occur in those cities that both enjoy increased short-run access to cleaner air and where the population is more sensitive to pollution exposure. Although China does not hold direct elections, the Chinese people now have much more freedom to express their opinions online and in social media on environmental issues. Urban leaders are also held accountable to their citizens’ voice because of rising information transparency brought about by the decline in the cost of collecting real time pollution data. The central government routinely evaluates city leaders when they are up for promotion. The current criteria for promotion include social stability and meeting environmental targets as well as local economic growth (Zheng et al. 2014). Both online complaints and offline protests are regarded as threats to social stability. The local official performance criteria provides ambitious local leaders with an incentive to consider adopting a “green policy,” especially if local residents increasingly desire them.

A novel feature of our study is how we measure the sensitivity to air pollution of residents of each city. Rather than relying on survey data, we use Big Data from Chinese social media. In recent research (Zheng et al. 2019), we use billions of social media messages posted on the equivalent of China’s Twitter, Weibo, to explore how the sentiment (expressed happiness) of the population in 144 cities is affected by pollution. Residents of different cities vary with respect to how sensitive they are to air pollution. We measure this by estimating a city-specific partial derivative of happiness (as revealed by social media content analysis) with respect to the city/day PM2.5 level (“sentiment-pollution” sensitivity) (see Note 1). After recovering this city-specific estimate, we regress it on city-specific attributes. We find the relationship between city income and pollution sensitivity is monotonically positive—people are more sensitive to pollution in richer cities. At the same time, very dirty and clean cities have relatively higher elasticity compared to cities in the intermediate pollution range. One explanation for this fact is that people who dislike air pollution move and live in cleaner cities, and at the same time, people in dirtier cities come to recognize the health risks associated with long-term pollution exposure.

Using ambient pollution data from Chinese cities, we identify the cities that  experienced a significant pollution decline due to the COVID-19 shutdown. Our data show that air pollution since the eve of the 2020 Chinese New Year (CNY) was significantly lower than that of the same periods in 2017–2019. To quantify the reduction in pollution associated with the shutdown, we use city/year/day pollution data and present an event study. Our results show that compared to the years before 2020, air pollution significantly decreased by 14.9% to 16.6% in the sixteen days after CNY Eve. We also obtain city-specific estimates that measure each city’s air pollution change during the COVID-19 shutdown days of 2020 relative to the same period in 2018 and 2019. We use those city-specific estimates to decompose the recent pollution changes s as a function of three key variables: the sharp declines in road traffic, the sharp decline in industrial activities, and the increase in home cooking (due to the closure of restaurants).

We divide the 144 Chinese cities into four quadrants based on their sentiment-pollution elasticity and the PM2.5 change during the COVID-19 shutdown. As shown in Panel A of Figure 1, the 49 cities in Quadrant I are those where air pollution significantly declined and the population is more sensitive to air pollution. These cities are defined as the “treated cities” in which we expect to see a larger experience effect due to clean air progress. 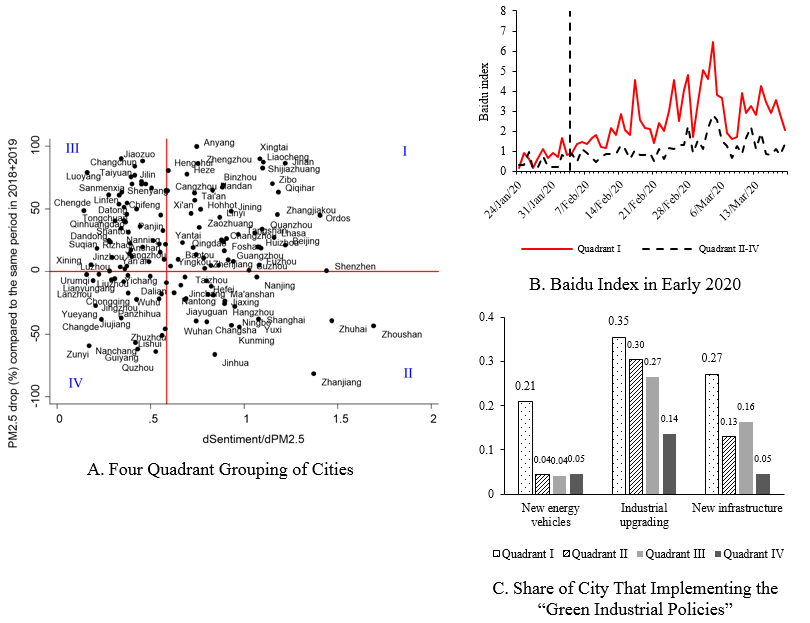 Internet Search Dynamics in the Treated and the Control Cities

We use Internet Search data from Baidu to test whether the Quadrant I city residents reveal a greater recent interest in environmental issues.

We use “environmental protection” as the keyword to create an environmental attention index (Baidu_index) at the city level using the Baidu platform (http://index.baidu.com/v2/index.html#/) (See Note 2). Specifically, the Baidu_index = total entries of the key word “environment protection” in the Baidu search engine divided by the total population. This variable is measured in the number of entries per million people and reflects the public attention devoted to environment protection for each city in a given time span.

The trends in Panel B of Figure 1 show that the quantity of Internet discussion activity mentioning “environmental protection” in Chinese cities in Quadrant I increased by more than in other cities during the same time period.

Whether the short-run improvement in air quality persists over time as the local economy recovers hinges on how such bottom-up pressure from the local people nudges the local government to enact credible anti-pollution policies. Therefore, we investigate whether local governments in 2020 are rethinking their environmental strategies and whether this “green push” is stronger for cities in Quadrant I.

Since February 2020, both central and local governments have issued many different stimulus polices aimed at boosting the economy and making up the economic losses suffered due to the COVID-19 shutdown. Some of the stimulus policies highlight “greenness” and “sustainability,” while others do not. We collected the policy documents issued by local governments from February 2020 to May 2020 from Bailu ThinkTank (http://www.bailuzhiku.com/policy/adlist) and extracted the stimulus policies related to industrial development. We focused on three types of “green industrial policies”—new energy vehicles, industrial upgrading (toward low energy intensity), and new IT infrastructure. Panel C of Figure 1 shows the statistical results for the four groups of cities presented in Panel A of that figure. We find that a larger share of the documents for cities in Quadrant I mention the “green industrial policies.” This is suggestive evidence that local governments in Quadrant I cities are responding to their citizens’ demands for blue skies and are taking actions to strike a balance between stimulating the economy and protecting the environment.

Past research on experience goods has focused on private goods such as movies, for example, Star Wars. For a movie, reading a summary of its plot and knowing which actors star in the movie do not give sufficient information for a person to appreciate the experience of watching a Star Wars movie. We believe that the same logic holds with respect to environmental progress. People who desire clean air but live in polluted cities do not fully appreciate what they lack until they actually experience clean air. A “silver lining” of the 2020 economy is that millions of Chinese urbanites have had this experience.

Our empirical evidence suggests that clean air is an experience good. Residents of Quadrant I cities are searching for information on environmental progress and their leaders are taking early steps to improve environmental quality. We will test our experience good hypothesis by studying whether Quadrant I cities enjoy a reduction in PM2.5 in the medium term relative to other Chinese cities.

Note 1: In Zheng et al. (2019), we divide the full sample of city-day observations into 144 city subsamples and estimate the following equation using a fixed-effect regression approach for each city i. This procedure generates a marginal city-specific partial derivative of sentiment with respect to PM2.5—the “sentiment-pollution” sensitivity, α1,i. It is expected to be negative—all else being equal, people are more likely to be unhappy on days when their city’s pollution level is higher.

SENTIMENTt,i and POLLUTIONt,i represent the sentiment measure and the pollution level (PM2.5 concentration) of this city i on day t, respectively. We include other variables Xt,i which represents the city’s weather conditions, and Tt. is used to control for date fixed effects, where T refers to a set of day indicator variables.

[Matthew E. Kahn is the Bloomberg Distinguished Professor of Economics and Business at Johns Hopkins University; Weizeng Sun is an Associate Professor at the School of Economics, Central University of Finance and Economics, China; Siqi Zheng is the Samuel Tak Lee Professor of Urban and Real Estate Sustainability at the Center for Real Estate, and Department of Urban Studies and Planning at Massachusetts Institute of Technology (MIT).]

Selden, T.M., Song, D.. Neoclassical growth, the J curve for abatement and the inverted U curve for pollution. Journal of Environmental Economics and Management, 1995, 29: 162–168.