The study explores the impact of migration controls on urban fiscal policies and the intergenerational transmission of human capital accumulation in China. It shows that migrants provide large positive fiscal externalities to major cities. The study evaluates the feasibility and effectiveness of alternative migration policies that offer the potential of decreasing inequality within China, while at the same time promoting growth via increasing the aggregate level of human capital in the economy. 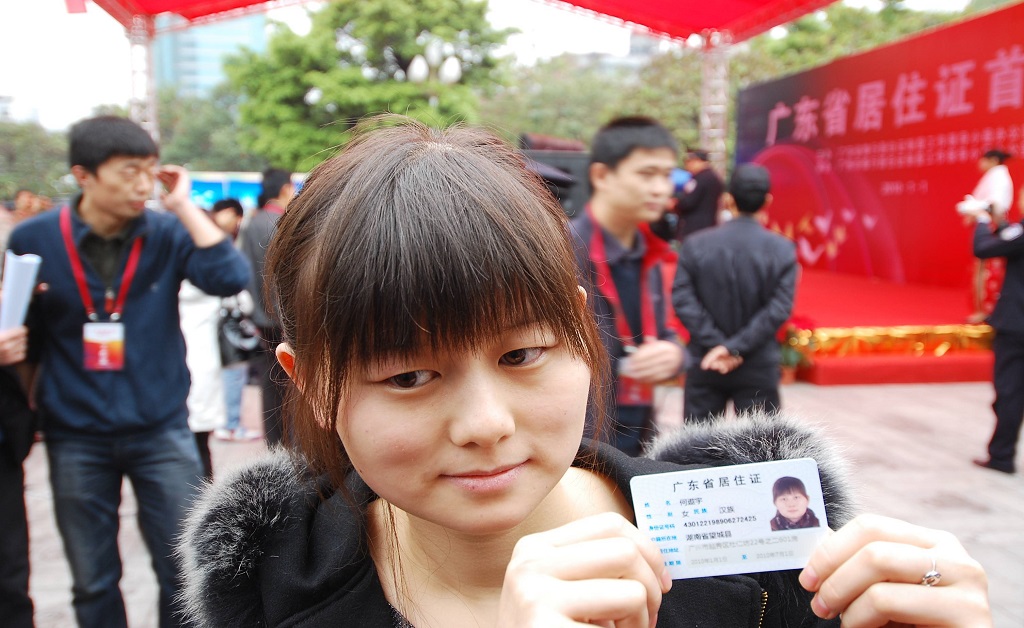 Numerous previous studies have argued that China’s current Hukou system has restricted labor mobility and, therefore, affected the spatial allocation of labor, capital, and other mobile production factors in the economy (see Whalley and Zhang 2004; Ngai, Pissarides, and Wang 2019; and Tombe and Zhu 2019). In 2014, the Chinese government initiated a series of Hukou reform measures. However, all tier one and most tier two cities still set stringent criteria for migrants to obtain local urban Hukou through the following categories: investments, tax payments, real estate purchases, employment status, college status, joining relatives, and special contributions. In contrast, lower-tier cities tend to have weaker requirements (Zhang, Wang, and Lu 2019). These differences may create new divides by making it easier for high-income households to move to big cities, while low-income households are pushed toward small cities (Economist 2020).

In addition, Au and Henderson (2006) and Desmet and Rossi-Hansberg (2013) suggest that Chinese cities are currently too small and migration cost leads to significant welfare loss. Fang and Herrendorf (2020) highlight the importance of high-skill workers for the development of a high value-added service sector in the economy. Building on these lines of research, Sieg, Yoon, and Zhang (2020) document that migrants provide large fiscal externalities to all large cities in China. They show that there are feasible reforms of internal migration and urban fiscal policies that can increase migrants’ access to high-quality education for their children in tier two and tier three cities, reduce inequality, and increase the supply of high-skill workers.

The empirical analysis in Sieg, Yoon, and Zhang (2020) is based on a combination of newly available data sets including the China Household Finance Survey (CHFS), the Migrants Dynamic Monitoring Survey (MDMS), Micro-Sample of Population Census, and China’s City Statistical Yearbooks. The CHFS provides detailed information on residency status, household income, consumption, housing, and locational choices. Moreover, the structure of this data allows us to follow migrant households over time and study the change of a household’s Hukou status. In contrast to the MDMS, the CHFS allows us to study the transition of Hukou status as well as the lifetime behavior of migrants with and without Hukou. The MDMS also provides important information about the behavior of temporary migrant households and the constraints they face.

Unlike literature that defines a migrant as a person who moves across townships or counties, Sieg, Yoon, and Zhang (2020) focus on moves across four locations: tier one cities, tier two cities, tier three cities, and the rest of the country. Importantly, all those who move from rural to urban areas, including within a prefecture, are counted as migrants in the quantitative analysis. Thus, the analysis highlights migration flows across city tiers while still accounting for large-scale rural-urban migration during China’s rapid urbanization since the 1990s. The study clarifies the concepts of permanent and temporary migration in China. Temporary migrants are individuals whose place of residence differs from their place of Hukou registration. Most rural-urban migrants are temporary migrants. Permanent migrants are those who have moved away from their birthplace and obtained an urban Hukou in the new city of residence. It is the local Hukou status that defines a migrant as permanent or temporary. The Hukou transition data allows us to identify permanent migrants, but most previous studies focused on temporary migrants. The composition of temporary and permanent migrants is shown in Table 1.

Table 1: Temporary and Permanent Migrants and Change of Hukou Status 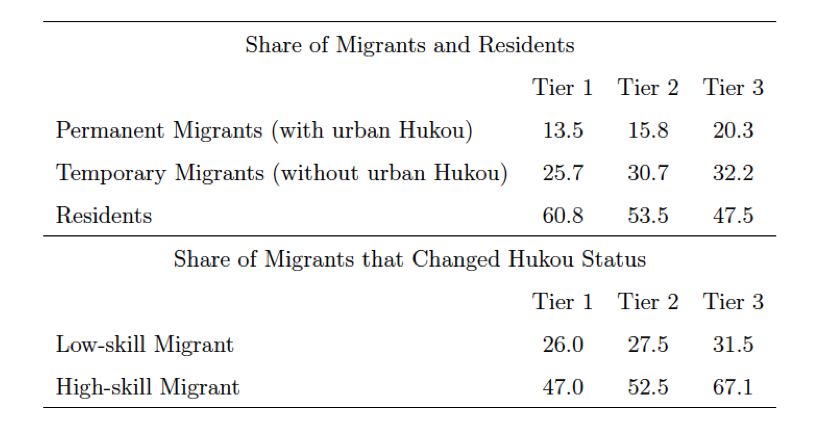 An important feature of the Hukou system is the regulation of access to a variety of local public goods and services. For example, Hukou status restricts access to local schools, health insurance, pension, unemployment insurance, maternity benefits, and housing providence funds. Access to these public goods affects investment decisions in human capital, inequality, and social development. As shown in Table 2, migrant children are often not enrolled in local public schools. Children of low-skill households are less likely to attend local schools than those of high-skill households. The study demonstrates that reform of the Hukou system requires significant changes in how cities are financed. While migration increases the overall human capital accumulation, the inequalities built into the Hukou system imply that there is much scope for increasing the overall accumulation of human capital of migrant children and children left behind in less developed parts of the country.

Table 2: Access to Educational Opportunities and Children Left Behind 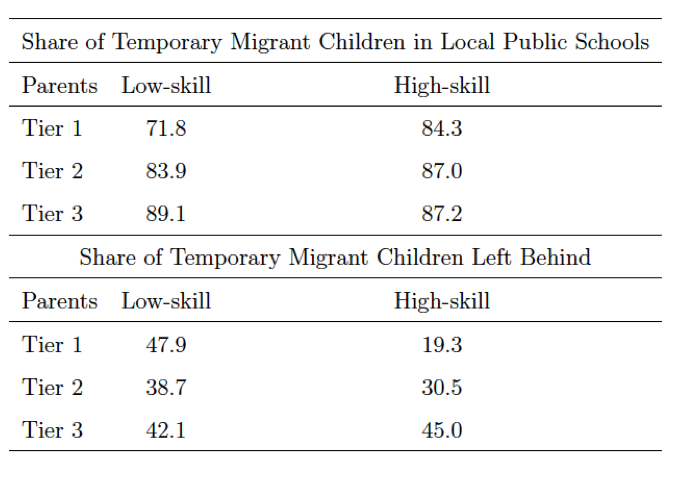 Cities play an important role in the intergeneration transmission of human capital. In a decentralized system of provision of education, such as the one in China, there are often large differences in school quality among cities. As a consequence, there is a need to understand urban fiscal policies and to characterize the differences in revenues and expenditures among local governments. Using data from the Ministry of Finance and City Statistical Yearbooks, Table 3 shows that Chinese cities primarily rely on three sources of revenue: revenues from local taxes and fees as well as tax sharing agreements with the central government, revenues from land and housing development, and intergovernmental transfers from the central government. As a consequence, the central government plays a large role in determining city finances.

To quantify the effects of internal migration controls on human capital accumulation and to assess the feasibility and effectiveness of potential reforms, the study develops and estimates a new overlapping generations model with heterogeneous households. The model has multiple locations that differ by local labor and housing market conditions as well as local tax and expenditure policies. Households, therefore, have strong incentives to migrate to higher-productivity cities that pay higher wages and have a higher quality of local public good provision. Migrant households face mobility costs, restricted access to local public goods, and wedges in housing markets. These wedges make migration less attractive and, thus, lead to an inefficient allocation of labor among cities. Moreover, migrant households must decide whether or not to leave their children behind with relatives in less-developed areas. The model thus captures the main constraints imposed on migrant households by the current Hukou system.

Internal migration controls then imply that migrants create a positive fiscal externality for almost all cities. On the expenditure side, migrants often do not have equal access to local primary and secondary schools and other public goods and services. Hence, they require lower expenditures than residents. On the revenue side, the housing demand of migrants drives a large share of new housing construction, which is an important source of local revenues in growing cities in China. The estimated model suggests the difference between total revenues paid by migrants and total local expenditures on migrants’ accounts for 6% to 15% of total city revenues. Not surprisingly, high-skill migrants provide a higher externality than low-skill migrants. While high-skill migrants tend to have better access to local public goods and services than low-skill migrants, they also pay significantly higher taxes. Moreover, the fiscal externality per migrant decreases by city tier, with tier one cities benefiting most from migrants. Finally, migrants tend to be younger than residents, which benefits the locally administered social security system. This aspect of internal migration creates another mechanism for fiscal externalities. The study, therefore, concludes that migrants provide large fiscal subsidies to residents in all major cities in China.

The endogenous spatial sorting of households and the heterogeneity of educational quality among cities significantly affect human capital accumulation in the economy. The analysis suggests that the current Hukou system creates inequality, suppresses human capital accumulation, and reduces economic growth. The Chinese central government has taken steps to address these problems. Since 2016, it has urged local governments to grant full residency rights to 100 million temporary migrants that currently live in small- and medium-sized cities. In the spirit of this policy directive, the study examines the feasibility and effectiveness of alternative reforms of the current Hukou system. Since tier one cities are already large and may have limited scope for population growth under the current government regulation, the study fixes the Hukou policy of tier one cities at the current level. However, there is a large potential for population growth in tier two and tier three cities.

Model simulations suggest that granting full residency rights to migrants in tier three cities is likely to achieve the target of 100 million migrants that has been proposed by China’s State Council in 2016. This policy change significantly increased the college attainment of children born in rural and less-developed areas, but it requires an equivalent increase in the consumption tax by approximately 1.3 percentage points. Even larger achievement gains can be achieved by including tier two cities in the group of cities that grant full residency rights to migrants. A policy that includes all tier two and tier three cities requires an equivalent consumption tax increase of approximately 3.3 percentage points. The counterfactual analysis predicts that more than 200 million migrants will receive residency rights under this policy. In conclusion, there exist feasible reforms of the Hukou system that could significantly increase college attainment of migrant children and reduce inequality by closing the educational gap between migrants and residents. By enlarging the pool of high-skill labor, these policies also promise to increase overall economic growth in the future.

Sieg, Holger, Chamna Yoon, and Jipeng Zhang. 2020. “The Impact of Migration Controls on Urban Fiscal Policies and the Intergenerational Transmission of Human Capital in China.” NBER Working Paper No. 27764. https://www.nber.org/papers/w27764.