The Value of Childhood Vaccination in China

Using data from the China Health and Retirement Longitudinal Study (CHARLS) we estimated the effect of childhood vaccination on later-life schooling and cognitive abilities of elderly Chinese. We found that being vaccinated in childhood increases schooling by one year and improves numeracy and episodic memory scores by 6 percent on average. These encouraging results confirm the powerful and long-lasting benefits of childhood vaccination. 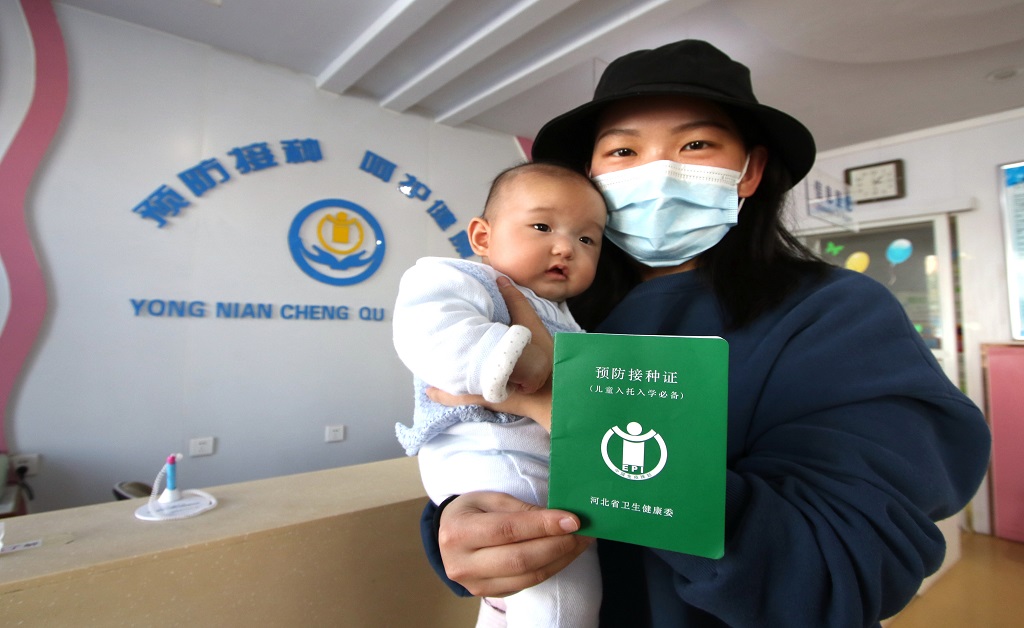 An important aspect of vaccination not typically assessed is its benefits throughout the life course. So, while some benefits of childhood vaccinations are well established (Driessen et al. 2015; Nandi, Shet, et al. 2019; Nandi, Deolalikar, et al. 2019; Nandi et al. 2020), most previous studies have assessed the benefits in the context of later childhood and adolescence. While the recent Nandi study (Nandi et al. 2020) did explore the effects of childhood vaccination on adult education, its focus was on adults aged 20–49, not the elderly, and it did not examine cognitive outcomes. Our study (Oskorouchi, Sousa-Poza, and Bloom 2020), however, comprehensively examines the long-lasting effects of childhood vaccination on educational and cognitive outcomes in later adulthood. It aims to investigate the enduring benefits of vaccination into older age, proof of which may help combat the recent rise of vaccination hesitancy and socioeconomic inequality—especially in a rapidly aging world that could exacerbate those disparities.

China provides a unique research setting to study vaccination’s long-term effects given: (1) the rapid change in the national immunization policy in the 1950s, and (2) the wealth of data available via CHARLS. The assumption of power by Mao Tse Tung was accompanied by a sweeping immunization initiative—an ideological shift based in Communist principles that sought to extend health innovations to workers and peasants and a practical realization that preventive medicine was more cost-effective than therapeutic interventions (Sidel and Sidel 1975). Therefore, in 1950, a smallpox vaccination campaign achieved 90 percent coverage nationwide and was followed by diphtheria toxoid and tuberculosis efforts. However, China was unable to sustain such high vaccination rates,  and Chinese adults thus comprise a varied cohort suitable for econometric study.

CHARLS is a longitudinal survey representative of the Chinese population over age 45 that collects basic demographic data and information on the socioeconomic determinants of aging, including physical and physiological health. For this study, we used the three standard CHARLS waves (2011, 2013, and 2015) and a 2014 retrospective wave that reported information on family and work history as well as data on childhood education, health, and wealth (Chen et al. 2015).

In CHARLS, cognitive ability is measured via two domains: episodic memory and mental status. The memory portion consists of a recall test wherein the survey respondent is read a list of ten Chinese nouns and is asked how many they can recite immediately and then four minutes later. Mental status is assessed by the respondent’s ability to: (1) name the day’s date, (2) redraw a picture, and (3) count down from 100 by sevens (numeracy). Schooling was assessed by converting the CHARLS variable of the highest level attained into number of schooling years.

The main independent variable—the treatment—in our models is childhood vaccination (defined as before age 15); 64 percent of our sample was vaccinated. While CHARLS does not provide information on the type of vaccine administered based on the timeline of various vaccine introductions to China, we can identify the pool of vaccines available to the cohort: the antitubercular bacillus Calmette-Guérin and vaccines against plague, yellow fever, poliovirus, measles, and possibly the combined diphtheria-tetanus-pertussis (DTP) immunization.

“Natural experiments,” such as universal vaccination programs, could theoretically eliminate selection bias in a research sample. However, the Chinese vaccination campaign was not mandatory, meaning it does not serve as pure natural experiment; parental attitudes, insurance status, and socioeconomic level all influence who receives vaccines even when access is universal. Further, ascribing later life outcomes to childhood vaccinations has methodological challenges; our novel combination of several varied matching techniques (propensity score matching, average treatment on the treated effect, k-nearest neighbor, kernel, and Mahalanobis distance algorithms; ordinary least squares regressions; correlated random effects model; and a series of placebo tests using outcome variables that are impervious to the treatment) allowed us to limit possible biases. After matching, the control and treatment groups did not differ in childhood socio-demographics (see Figure 1), and re-estimating the original model with placebo outcomes (i.e., the share of living siblings or a dummy for ever been a smoker) leads to statistically insignificant results. We also performed a wide range of robustness checks, including computing the propensity score on a subset of conditioning variables (i.e., excluding the potentially endogenous “childhood education” variable) and limiting the analysis to those aged 80 or younger so as to exclude the “super healthy,” whose inclusion could introduce mortality-related selection bias. Our results yielded virtually the same strong and significant effects regardless of which matching algorithm, sample, or set of conditioning variables we used. The statistical significance of our results remains high even when we correct the p-values for multiple testing by applying the Benjamini and Hochberg (1995) method.

Our analysis of the CHARLS data indicates that adults over age 45 who were vaccinated before the age of 15 performed better on cognitive tests and completed more years of schooling:  vaccinated individuals completed about one more year of schooling and performed considerably better on several cognitive tests, which included 6 percentage points higher numeracy and episodic memory scores. These results bolster the existing literature that describes the health, cognition, and schooling benefits of vaccination. We also believe our estimates are conservative because we do not factor in herd immunity or selective mortality.

Figure 1: Balance of conditioning variables before and after matching 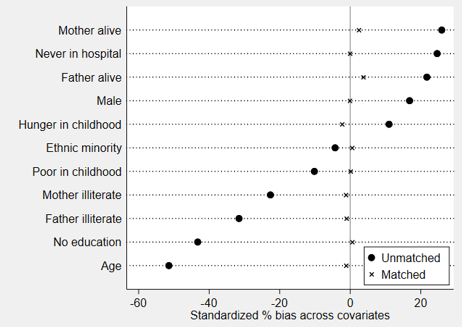 These findings are particularly relevant to China: Chinese elder care is an especially vulnerable aspect of its contemporary society, as fertility restrictions have, naturally, produced fewer children to care for their elderly parents, and migration patterns have separated many existing children from their elders in need of care (Smith, Strauss, and Zhao 2014). Vaccination’s economic payoffs, especially those that manifest as cognitive benefits that could combat dementia and its associated costs, could ease the economic burden of elder care in the future generations of a rapidly aging population.

The long-lasting benefits of vaccination are not confined to China, of course. Aging populations are a worldwide concern. Inequality persists. In 2018, 19 million children worldwide received no regular immunizations (WHO 2019) and vaccine hesitancy is, troublingly, growing (Vaccine hesitancy 2019). If childhood vaccination could be framed as an investment with a lifelong payout, its dividends of enduring health benefits, reverberating economic gains, abatement of elder care cost burdens, and reduction of socioeconomic inequality could be reaped in greater numbers and perhaps help to stem the tide of vaccination hesitancy.