This paper investigates whether competition spurs quality improvement using the entry of Beijing-Shanghai high-speed rail (HSR) as an exogenous increase in competition to affected flights to destination cities along the HSR line. We find that competition from the entry of HSR leads to significant reductions in the mean and variance of travel delays on the affected airline routes and that these improvements are mainly driven by reductions in departure delays and the duration of taxi-in time at the destination airport. 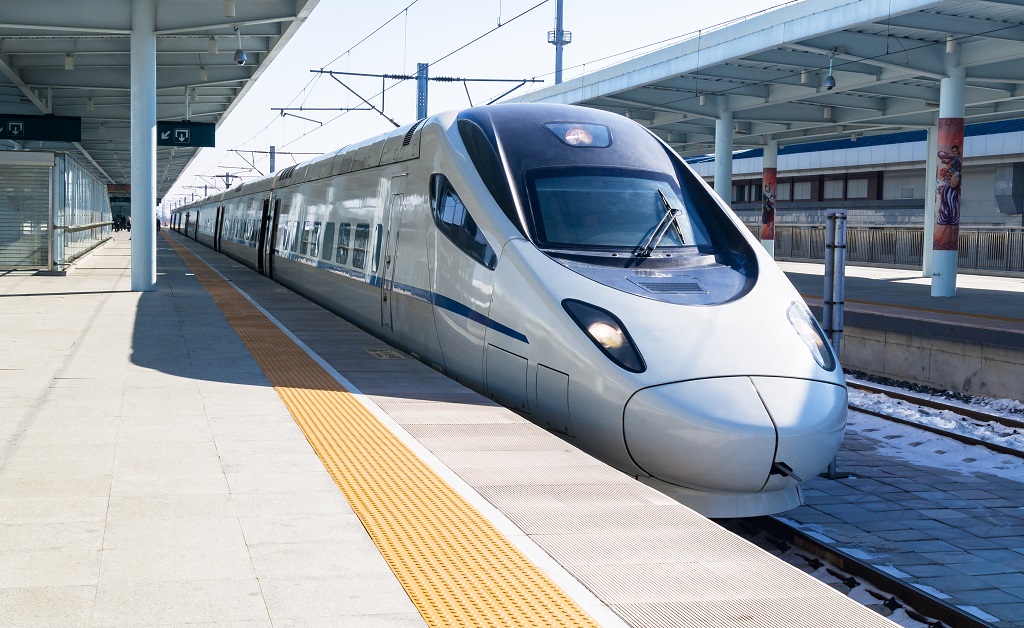 There has been a long-standing interest in the effects of competition, which is widely recognized as a driver of improved product quality, operational efficiency, innovation, and economic growth (Nickell, 1996; Holmes and Schmitz Jr, 2010; Amiti and Khandelwal, 2013; Buccirossi et al. ,2013). Establishing a causal impact of competition on productivity or efficiency presents substantial challenges due to the difficulty of identifying a clean source of exogenous variation in competition; it is even more challenging to isolate the mechanisms through which competition impacts quality or productivity (Holmes and Schmitz Jr, 2010). In our recent working paper (Fang et al., 2020), we use the entry of Beijing-Shanghai high-speed rail (HSR) on June 30, 2011, as an exogenous increase in competition for the commercial airlines, and investigate whether competition spurs quality improvement, and, if so, how.

In this study, we use a proprietary and comprehensive dataset containing 865,967 non-stop Beijing-outbound flights scheduled by 41 airlines to 113 domestic destinations in China between January 1, 2009 and December 25, 2012. The richness of this flight data enables us to study the impact of HSR competition on the airlines’ quality improvement proxied by their on-time performance (OTP), and to pinpoint the sources of the quality improvement. We utilize a difference-in-differences (DID) strategy that exploits the variation in competition caused by HSR entry across cities. The treatment group is flights departing from Beijing Capital International Airport (BCIA) for 11 cities connected by the Beijing-Shanghai HSR (denoted by red train signs in Figure 1), and the control group is flights departing from Beijing for 102 non-HSR destinations (denoted by green and black train signs, as well as blue airport signs, in Figure 1). Following Mayer and Sinai (2003) and Prince and Simon (2015), we examine six different OTP measures as outcome variables, namely, the arrival/departure delay in minutes (the difference between the actual arrival/departure time and scheduled arrival/departure time, which measures the intensive margin of the flight delay), an indicator for whether a flight arrives/departs 15 minutes later than the scheduled arrival/departure time (which measures the extensive margin of the flight delay), as well as the actual travel time, and excessive travel time. 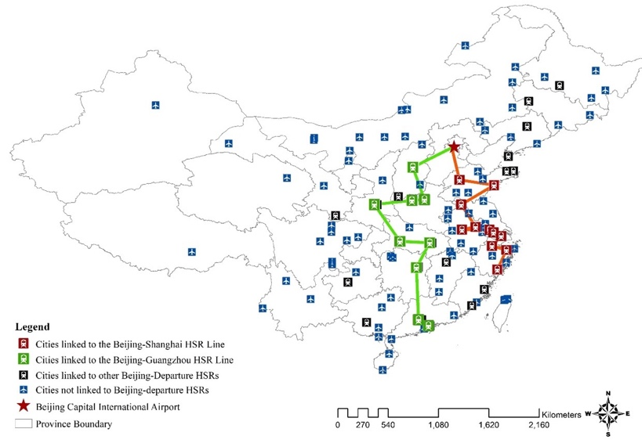 We find that, at the intensive margin, the HSR entry leads to an average decrease of 2.54 minutes (about 14.51%) in arrival delay minutes; and at the extensive margin, the HSR entry causes a 2.5 percentage point reduction in arrival delays of 15 minutes or longer. We also find that the entry of HSR significantly reduces the variance of flight arrival delay minutes. Using the alternative measures of OTP, we find very robust results indicating that HSR entry reduces actual travel time and excessive travel time by 4.73 and 3.92 minutes, respectively. These results are quantitatively similar when we use the narrower control group consisting of only nine destination cities (denoted by green train signs in Figure 1) along the Beijing-Guangzhou HSR line, which began operation on December 26, 2012. The planning and construction of the Beijing-Guangzhou HSR line occurred at the same time as the Beijing-Shanghai HSR, but it took longer to complete; thus, the nine cities on the Beijing-Guangzhou HSR are more comparable to the treatment group during the sample period between January 1, 2009, and December 25, 2012.

We document two main findings in the dynamic analysis. As shown in Figure 2, the parallel pre-trend assumption in the DID methodology holds, as the coefficient estimates are statistically indistinguishable from 0 before the HSR entry, indicating that there is no systematic difference in pre-trends between the treatment and control flights in their OTP measures. Second, the treated flights began responding immediately after the entry of the Beijing-Shanghai HSR; and the effects are somewhat persistent. 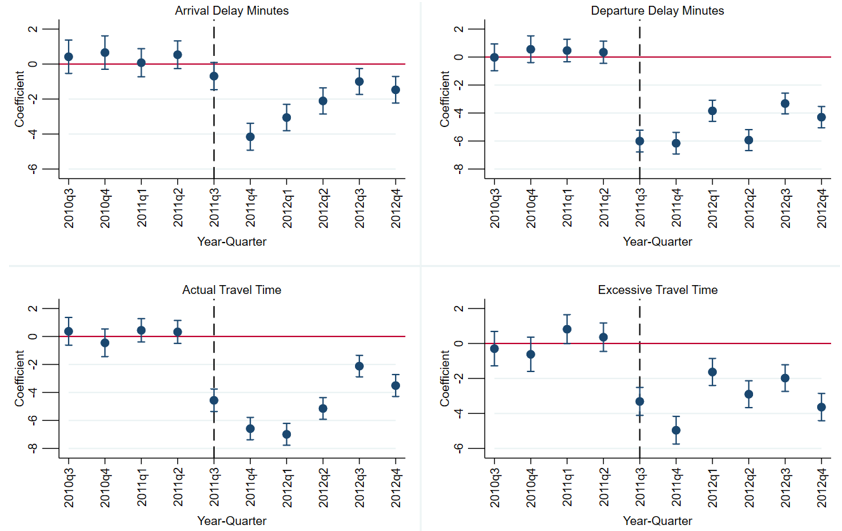 To identify the source of improvement in quality, we investigate the impact of competition on each breakdown of the flight schedule. We find that HSR entry leads to an average reduction in departure delay by 5.28 minutes, which accounts for the largest decline among all contributors to the post-HSR reduction in arrival delay minutes. In addition, HSR entry leads to a reduction of the taxi-in time of 1.39 minutes on average at the destination airports impacted by the HSR. The results identify the channels through which competition stimulates quality: minimizing departure delay through more efficient boarding process, and reducing runway congestion through better airport surface management and runway scheduling.

We consider and rule out a variety of alternative explanations for our findings. First, to address possible contamination from the treatment to the control flights, we test the impact of the HSR entry on airtime and find that the HSR entry does not cause congestion in the air corridor for the control flights. We also do not find that the treated routes are provided with more favorable scheduling to less congested time slots. Second, to address the concern that the reduction in arrival delays might be the result of a deliberately prolonged scheduled duration, rather than a genuine improvement in OTP, we test the impact of the HSR entry on scheduled duration and rule out this alternative explanation. Third, to examine whether a reduction in the number of passengers on the treatment flights, which leads to faster check-ins, could drive our findings, we use a subsample of flights during China’s holiday periods, when all airports and airlines operate at full capacity. We still find that HSR entry leads to significant reductions in flight delays. Fourth, to address the possibility that our results are driven by some flights with more serious delays being either eliminated or reassigned new flight numbers, we focus on a subsample of flights that existed both before and after HSR entry. We find that the improvement in the OTP of treated flights remains in this subsample of flights. We also consider and rule out other alternative explanations, such as more favorable military/air traffic control, among others. Finally, we conduct placebo tests using a fictitious treatment group, or a fictitious treatment date, and both placebo tests confirm that the competition effects we estimated are not caused by other spurious factors.

The richness of our flight data also allows us to better understand heterogeneity in the service quality response to the competition from HSR entry. We find that non-hub airlines and flights on short-to-medium routes (air distance within 1,200 km) are more responsive to HSR entry than their respective counterparts. We also extend our analysis to cover the sample period up to September 2015, by which time 10 additional HSR lines had been introduced. We find that our results are robust to the extension of the larger sample. Lastly, we use our estimates to conduct a back-of-the-envelope calculation of a lower bound of the value of the time savings resulting from the improvement in the OTP of the treated flights for air travelers. We estimate that a lower bound of the discounted present value of the time saving for air travelers taking round-trip flights on the affected routes due to the HSR entries is around CNY 15.72 billion.