This paper investigates the impact of higher education on corporate innovation using a difference-in-differences approach. We find that Chinese firms in skilled industries generate better innovation outcomes, especially firms headquartered in provinces with more science and engineering college graduates, young firms that are more likely to hire young graduates, and firms located near universities. Also, we show that technological innovation is a mechanism through which higher education affects productivity growth and thus the economy. 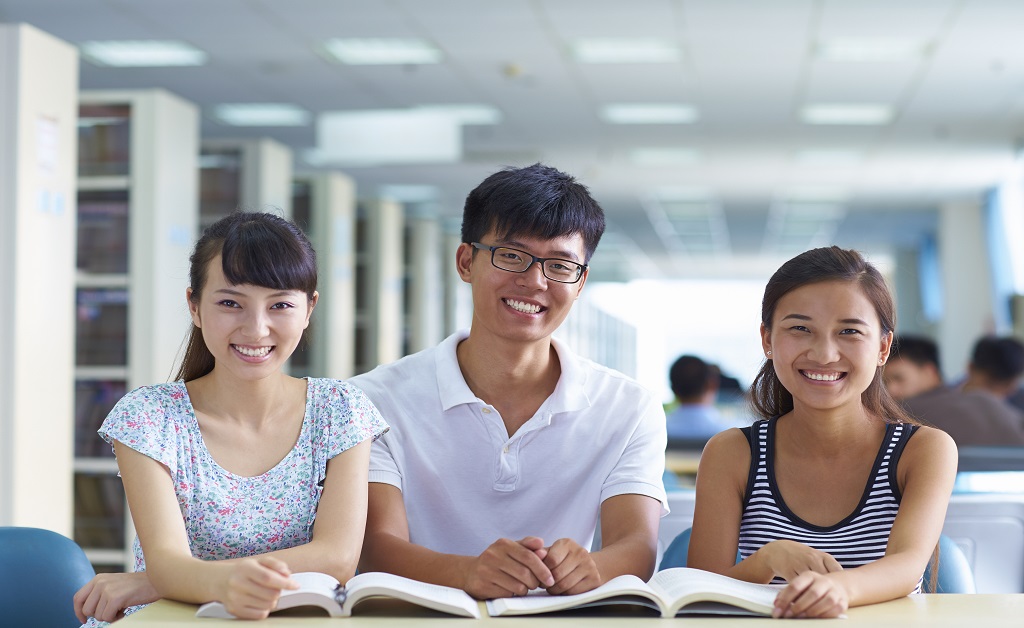 We posit that a labor force consisting of many individuals with higher education enhances corporate innovation. According to endogenous growth theory, human capital is the engine of the innovation process (e.g., Romer 1990; Aghion and Howitt 1992; Acemoglu 1996; Aghion and Howitt 1998). However, such a positive role of human capital in innovation may differ between higher education and primary and secondary education. The primary- and secondary-educated workforce is considered to facilitate only the imitation of existing technology, whereas college-educated labor could promote the adoption of new technology that eventually leads to more sustainable economic growth (Vandenbussche, Aghion, and Meghir 2006; Aghion et al. 2009; Hunt and Gauthier-Loiselle 2010; Castelló-Climent and Mukhopadhyay 2013).

The education system in China is based on college admission policies, or gaokao, which is virtually the only gateway to top universities. In China, government plays a central role in developing higher education and setting education policies. In early 1999, the Ministry of Education proposed a 20% increase in admission for that year but soon revised it to an unprecedented 44% increase. This enrollment expansion was aimed at stimulating domestic spending on higher education and postponing high school graduates’ entry into the labor market (Wei and Li, 2000). We plot the time trend of college entrance exam attendance in Figure 1, which shows that the college admission rate has increased sharply since 1999. 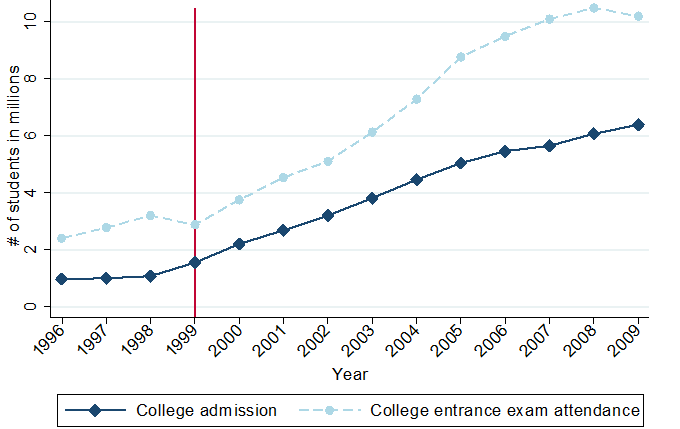 The sudden increase in college admissions in 1999, in turn, generated an exogenous surge in the supply of highly skilled labor in 2003. Therefore, we adopt a difference-in-differences (DID) approach to investigate how the innovation output of firms in skilled industries changes relative to that of firms in unskilled industries after the surge in college-educated workers.

We obtained 8,081 firm-year observations of 1,268 public non-financial firms from 1999 to 2009 for our regression. Specifically, to test whether the parallel trend assumption of the DID approach holds, we followed Bertrand and Mullainathan (2003) and examined the dynamics of innovation output surrounding the introduction of the higher education expansion policy. Our test reveals that there is no pretreatment trend in innovation output.

Note:Treati assumes a value of one for a firm in a skilled industry or a value of zero for a firm in an unskilled industry. Postt assumes a value of one for the 2003–9 period after the surge in the college-educated workforce caused by the higher education expansion policy in 1999, and zero for the 1999–2002 period. The coefficient of interest is the coefficient of the interaction term between Treat and Post, Treat×Post, which captures the innovation difference in treatment firms before and after the surge in skilled labor rather than the similar before-after difference in the control firms. Firm control is the vector of variables of firm and industry characteristics. All regressions include firm and year fixed effects. The t-statistics reported in parentheses are based on standard errors clustered at the firm level. ***, **, and * indicate significance of 1%, 5% and 10%, respectively.

Hunt and Gauthier-Loiselle (2010) found that skilled immigrants in the US produce twice as many innovations as US natives, and one reason is that these immigrants disproportionately hold science and engineering (S&E) degrees. We thus hypothesize that the impact of the surge in skilled labor on corporate innovation should be more significant among firms headquartered in provinces with more college graduates in the S&E field.

Ouimet and Zarutskie (2014) find that young firms exhibit a higher average growth rate because they attract more young workers, who possess more current technological skills due to their recent education and are more willing to take on risky projects within a firm. Therefore, we expect the impact of the surge in skilled labor to be more significant among young firms, because the college expansion provides them with more educated young labor

Firms’ geographic proximity to universities may affect the effect of higher education on corporate innovation because college graduates may choose to work in local firms. Thus, we expect firms located close to universities to be more likely to take advantage of the increased supply of skilled labor because geographic proximity enables easier matching or convenient communication between firms and graduates.

All of the above hypotheses are verified and we find that the percentage of S&E students, the firm’s age, and the firm’s geographic proximity are underlying mechanisms through which higher education expansion promotes innovation output. In other words, the positive effect of human capital on innovation is more pronounced for firms headquartered in provinces with more S&E college graduates, young firms that are more likely to hire young graduates, and firms located near universities.

This study (Kong, Zhang, and Zhang 2020) makes two major contributions to the existing literature. First, our paper provides evidence that innovation serves as an important mechanism underlying the growth effect of higher education. Specifically, we identify that higher education has a strong impact on firm innovation, and through this effect, we link higher education to economic growth. Our evidence also contributes to the debate regarding the role of human capital in innovation. Although human capital is regarded as the engine of innovation in endogenous growth theory (e.g., Romer 1990; Aghion and Howitt 1992; Acemoglu 1996; Aghion and Howitt 1998), previous studies have reached mixed conclusions concerning the heterogeneous effects of education on innovative human capital (Aghion et al. 2009; Hunt and Gauthier-Loiselle 2010; Castelló-Climent and Mukhopadhyay 2013; D’Acunto 2014).

Moreover, we contribute to the innovation literature investigating the drivers of firm innovation by identifying the role of corporate human capital. Our findings lend support to previous studies concerning the effect of managers’ human capital on corporate innovation (Custódio, Ferreira, and Matos 2019; Chemmanur et al. 2019). Moreover, our study adds to the growing literature concerning the determinants of corporate innovation at the employee level, including employee incentives, treatment, and efforts (Chang et al. 2015; Chen et al. 2016; Liu et al. 2017), tolerance for failure (Tian and Wang 2014), and labor law and unionization (Acharya, Baghai, and Subramanian 2013; Flammer and Kacperczyk 2015; Bradley, Kim, and Tian 2017; Gao and Zhang 2017).