The Chinese government has occasionally suspended IPOs, exogenously creating uncertainty about access to public markets for firms already approved to list. We show that suspension-induced delay reduces corporate innovation activity both during the delay and for years after listing. 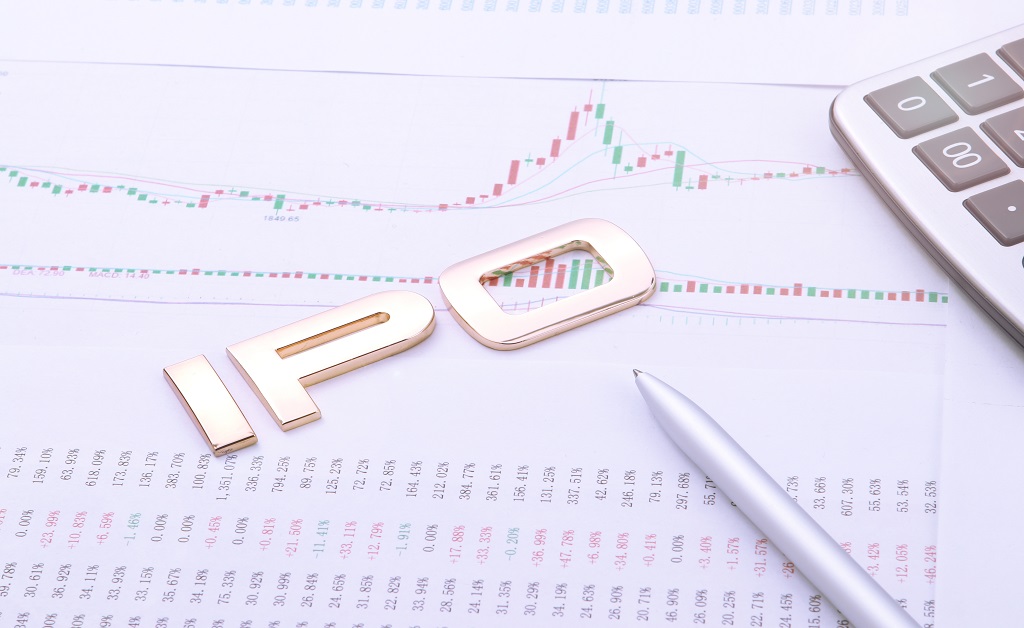 Existing literature finds that public listing can reduce innovation quality (Ferrira, Manso, and Silva 2012; Bernstein 2015), but also that public equity provides risk capital that enables innovation (Atanassov, Nanda and Seru 2007; Acharya and Xu 2017). We contribute to this debate by analyzing the role of uncertainty in access to public markets. This is especially relevant in emerging economies, where alternative sources of risk capital are less mature and regulatory infrastructure is less predictable than in developed countries. The Chinese setting offers a novel source of variation: On multiple occasions, regulators have suddenly and without forewarning suspended all IPO activities indefinitely, creating uncertainty among firms already approved to list but waiting in a queue (the order of which is public information).

Public equity is an important source of risk capital. It is more so in China and other emerging markets because of limited alternative funding channels (Cong et al. 2020). The Chinese A-share market has become the second largest in the world, with 3876 firms listed and a total market capitalization of about 8.5 trillion USD at the end of 2019. Despite its economic importance, entering the Chinese capital market involves time-consuming red tape in the IPO approval process not experienced in the common registration-and-disclosure arrangement (except for the “Sci-Tech Innovation Board,” which just launched in July 2019). The China Securities Regulatory Commission (CSRC) also suddenly and without forewarning suspended the IPO process nine times between 1994 and 2015. The suspensions have all been ex-ante and indefinite in duration, and in practice ranged from 94 to 409 days (see Note 2). While firms learn about the possibility of suspension from historical occurrences, they cannot anticipate suspensions months in advance. The suspensions tend to occur during bear markets, which is not a concern for our particular identification strategy.

In Figure 1, we summarize the regular IPO process and its average duration, and mark the ways suspension is involved (also see Figure 2 for illustration) (see Note 3). The alleged objectives (e.g., stabilizing the market and guarantee liquidity) of these interventions have not been convincingly validated in retrospect (Packer et al. 2016; Shi et al. 2018), and may have unintended consequences, as we demonstrate.

We focus on two suspensions: 2008–2009 and 2012–2014. We study their effects on firms approved to list in the previous 12 months on the Shanghai and Shenzhen Main Boards and SME Boards. There is obvious discontinuity of approval-to-listing delays a few months ahead of the official start of the suspension, which we use to divide the estimation sample into control and treatment groups (Figure 2). Members of the control group are approved earlier and list with normal delay (i.e., standard processing time), while members of the treated group must wait until the suspension ends and face a longer time between approval and listing, as well as greater uncertainty about when they can list (see Note 4). The average delays of control (approved and experienced regular processing time) and treatment (approved but delayed due to suspensions) firms are 3.23 months and 16.3 months, respectively. 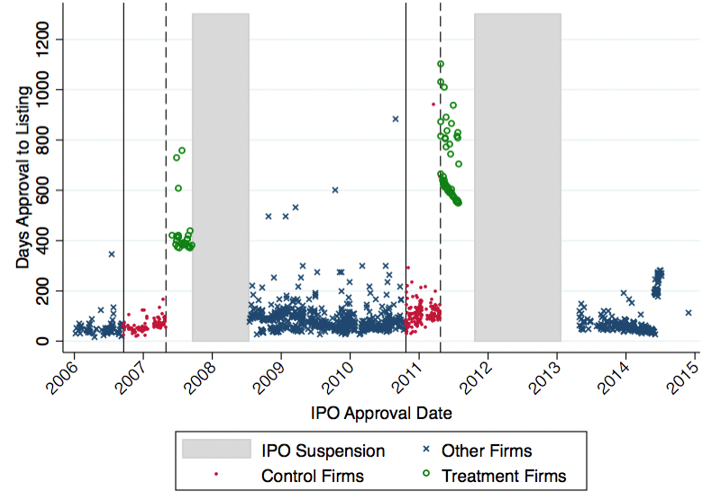 Note: This figure shows the delay (days between IPO approval and listing) for all IPO firms (a few outlier firms are excluded). The x-axis is the date of IPO approval. Each IPO firm is a point. The sample used in analysis (estimation sample) is those firms to the right of the solid vertical lines (12 months before the suspension) and to the left of the suspension periods. The firms are divided into treatment (red triangles, 232 firms) and control groups (green circles, 118 firms) based on the observable discontinuity in delay. The year labels indicate the end of each calendar year.

We use the number of invention patent applications as a quantity measure and three proxies to evaluate innovation quality: Number of granted Chinese patents, number of granted patents filed overseas, and citation data from Google Patent (see Note 5). There are no ex-ante differences between the treatment and control groups in these outcomes or in other firm characteristics, and all firms in the sample ultimately list in China.

We find that suspension-induced delay causes sharp declines in innovation, an effect that lasts at least until the fourth year after approval, consistent with the cumulative nature of innovation (Figure 3). Quantitative results are summarized in Table 1. Within one year after approval, the suspensions on average cause declines in patent application by about 30%, in domestic and global patent grants by 20% and 100%, and in citations by around 40%. We then turn to the third and fourth years following approval to examine the long-run effect, when most suspended firms have publicly listed. Conditional on having listed, the affected firms file on average 23% and 16% fewer patent applications in the third and fourth years post-approval (see Note 6).Our conservative, back-of-the-envelope calculation indicates that it would take at least 7.7 years after the year of IPO approval to close the gap in patent applications between the two groups. Beyond innovation activities, we find a contemporaneous positive effect on leverage and negative effects on tangible investment and return on sales, which all dissipate in years after IPO, and no measurable effects on sales or earnings. 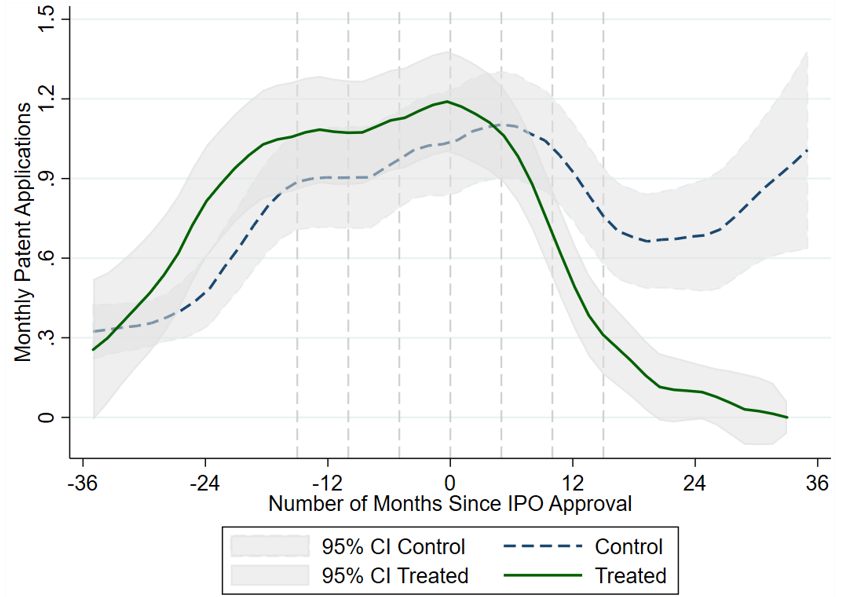 Note: This figure is a visual demonstration of the effect of suspension, showing Chinese invention patent applications by the month proximate to the committee approval date. We sort firm-months proximate to the month that a firm was approved to IPO. For the treated firms, firms drop from the sample as they list, and all firms are included at month zero and before. Control firms are included before and after listing. We use a local polynomial with Epanechnikov kernel using Stata’s optimal bandwidth: 95% confidence intervals shown. Both affected and unaffected firms' patent applications rise leading up to approval as firms ready themselves for listing, reflecting either more innovation or the need to increase disclosure during this period. After approval, patents decline much more for delayed firms.

Note: This table summarizes quantitative results regarding multiple measures of innovation activities. We show that results are similar in both a Poisson model (following Aghion et al. 2005) and an OLS model. The OLS results are converted to a percentage using sample mean. The effects shown here are primarily based on the Poisson tests. All are statistically significant at conventional levels. a The short-term results inevitably compare public firms (control group) to private ones (treated group). b The second year is skipped because some of the suspended firms have not gone public. The third and fourth year effects on application quantity are estimated conditioning on the firms having become publicly listed.

We consider two plausible mechanisms to explain the immediate and persistent decline in innovation: financial constraints and uncertainty. The evidence is more consistent, with uncertainty being the primary channel. Under a financial constraint mechanism, we would expect that firms with easier access to debt (state-owned enterprises) or private equity (VC/PE-backed firms) would experience smaller effects. Yet there is no difference in the effect for SOEs, and the effect is considerably larger for VC/PE-backed firms. We also find that the effect increases in R&D intensity, a proxy for dependence on risky innovation, but does not vary with standard measures of financial constraints from the literature. In a separate analysis, we also document that the suspensions were associated with depressed VC investment in Chinese portfolio companies, even among US VCs active in China. This finding supports anecdotal evidence from VCs that by creating uncertainty about exit potential, the suspensions chilled even the VC market.

The persistent reduction in innovation activities even after the resolution of uncertainty and financial constraints suggests that innovation is cumulative in nature, with high-quality innovation building on earlier research and requiring firms to maintain their human and physical research infrastructure. Heightened policy uncertainty, though transitory, could also have permanently altered the managers’ risk tolerance and innovation strategies. We find consistent evidence using executive mobility data.

Recognizing the adverse effects of uncertainty-generating intervention in the IPO process, the CSRC has stressed IPO normalization starting in late 2019 and has committed to reduce the long queues through faster approval processes (see Note 7). As a pilot program of an IPO registration system, the Sci-Tech Innovation Board has been smoothly functioning for almost a year (see Note 8). China’s innovation ecosystem could continue benefiting from regulators’ focusing on fostering accessible IPO markets with transparent rules and minimal ad-hoc intervention.

Note 3: See Shi et al. (2018) for more information on IPO process. See Cong et al. (2020) for discussion about funding of innovation and IPO regulation in China. The official document of IPO process is available in Chinese at https://neris.csrc.gov.cn/falvfagui/rdqsHeader/mainbody?navbarId=3&secFutrsLawId=903e6bbb49c742de90aade833278585f&body=

Note 5: China has three classes of patents: invention, utility model, and design. Invention patents cover new technical solutions relating to a product, a process, or improvement (analog to U.S. utility patents); utility model patents represent new technical solutions relating to the shape, the structure, or their combination, of a product; and design patents cover new designs in relation to shapes, patterns, colors, or their combination, of a product. Applications for these two types are essentially never rejected. Patent applications in China have increased dramatically since China established formal patent law in 1985, and there are now more invention patents filed in China than in the United States.

Note 6: R&D expenditure data are of poor quality and limited availability. In the year after delayed firms IPO (R&D spending is observable only for public firms), between-group difference of R&D scaled by firm asset is nearly significant at 10% level, suggesting that delayed firms may invest less in R&D immediately after listing.

Note 8: The Sci-Tech innovation board (STAR Market) launched on July 22, 2019. Up to March 2020, nearly 100 firms have listed and the total market value have reached over one trillion CNY (about 170 billion USD). See http://kcb.sse.com.cn/ for official information, and http://www.sse.com.cn/market/stockdata/statistic/ for statistics. See https://www.cnbc.com/2019/07/22/china-star-market-shanghai-kicks-off-new-nasdaq-style-tech-board.html and http://www.xinhuanet.com/english/2019-06/13/c_138140770.htm for news coverage.