As a quasi-natural experiment to estimate the causal impact of the collateral-based unconventional monetary policy, we exploit the expansion of the collateral for the Medium-Term Lending Facility (MLF) in the interbank bond market on June 1, 2018 by the People’s Bank of China. We also consider that many bonds are dual-listed in a largely segmented exchange market. We find that the policy reduced the spreads of the newly collateralizable, dual-listed bonds in the treatment market (the interbank market) by 42–62 basis points, compared to those in the control market (the exchange market). We also find that there is a pass-through effect from the secondary market to the primary market: the spreads of the new issuance of treated bonds in the interbank market were reduced by 54 basis points. 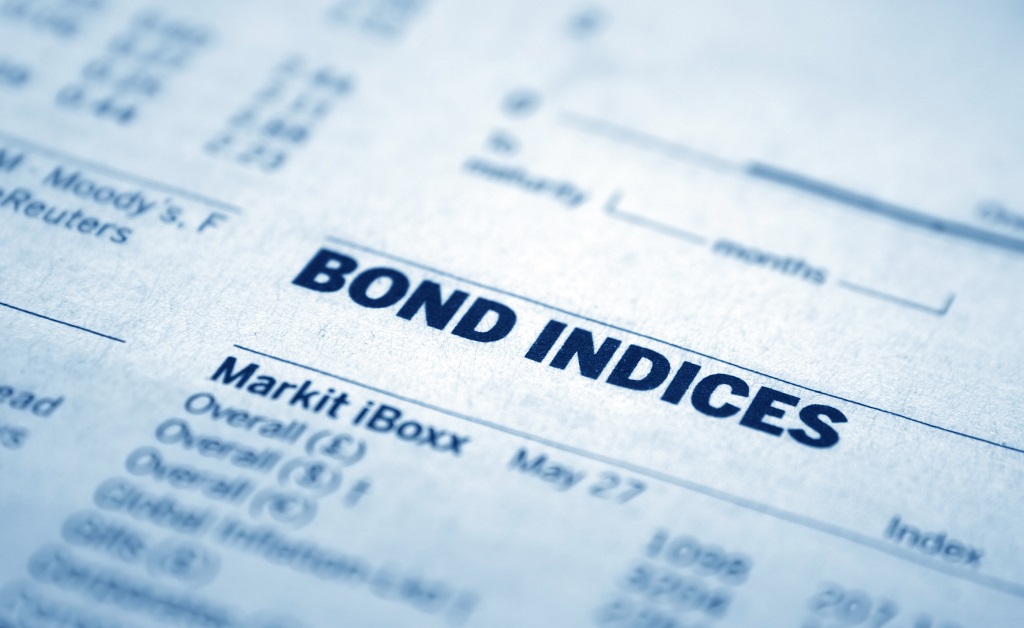 Since the 2008 global financial crisis, central banks have widely deployed collateral-based monetary policy (involving quantitative easing or QE) to inject liquidity into targeted sectors. For instance, the U.S. Federal Reserve Board (Fed) launched the Term Asset-Backed Securities Loan Facility (TALF) in late November 2008, through which the Fed lent up to $1 trillion to financial markets against collaterals of asset-backed securities (ABS) and loans guaranteed by the Small Business Administration. The European Central Bank launched the Long-Term Refinancing Operations (LTROs) to reduce sovereign bond spreads and inject liquidity into the market, where it provides low interest-rate funding to Eurozone banks collateralized by sovereign debt.

The People’s Bank of China (PBoC) introduced collateral-based monetary policy tools, namely Short-term Liquidity Operation (SLO), Standing Lending Facility (SLF), MLF and Pledged Supplementary Lending (PSL), between 2013 and 2014 (see Table 1). Since their launch, these collateral-based lending facilities have experienced rapid growth. At the end of 2018, the balance of MLF, SLF and PSL accounted for about 25 percent of China's monetary base (see Figure 1).

These unconventional monetary policy tools differ from traditional monetary policy tools, as they aim to adjust not only interest rates but also the leverage ratios by changing the haircut or margin of underlying collateral. Haircut is the difference between the current market value of an asset and the value ascribed to that asset for purposes of loan collateral. For example, a bond not eligible as collateral has a 100 percent haircut rate. Making it eligible as collateral for lending facilities with a 20 percent haircut rate allows the investor to borrow up to 80 percent of the bond’s market value. The leverage is 1/haircut, which is equal to 5 in this case. Geanakoplos (2010) shows that decreasing a haircut rate increases asset value. Chen et al. (2018) provides evidence for the relationship between haircut and asset prices. The intuition is that higher asset-based leverage allows the asset demand to better reflect optimists’ beliefs, and thus those beliefs push up asset prices. Ashcraft et al. (2011) further show that collateral-based monetary policy, by reducing the haircut rate of assets, can (1) increase the prices of collateral assets and reduce financing costs and (2) increase the supply of collateral and ease the financial constraints of financial institutions.

Note: The collaterals this table documents are eligible assets for the corresponding monetary policy tools as of 2018. 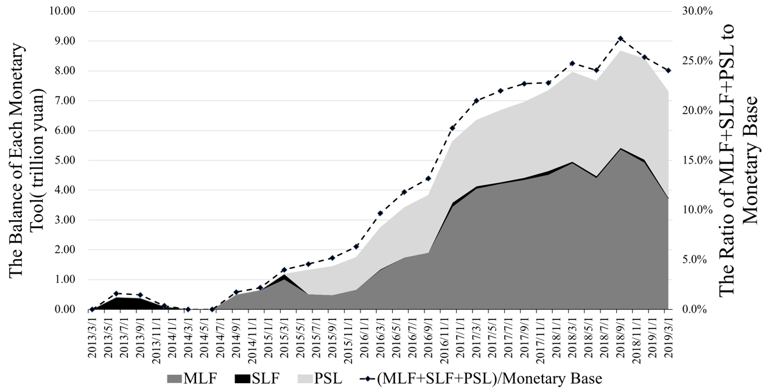 Note: Authors calculated these statistics according to data reported by PBoC, obtained from WIND, as of May 30th 2019.

Despite the rich theoretical literature, it is difficult to empirically identify the causal effects of collateral-based monetary policy on the financial system and real economy due to the lack of policy counterfactuals. In this study, we address the problem using a triple-difference empirical design, by exploiting a unique feature of China’s bond market and a policy intervention by China’s Central Bank. 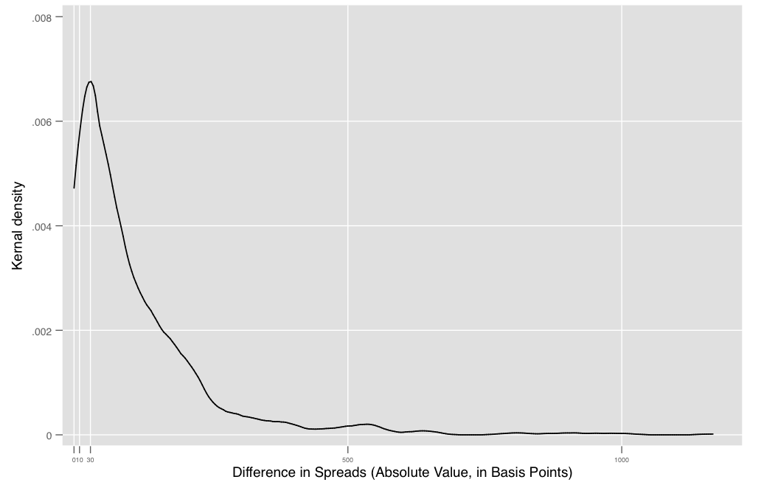 We exploit a quasi-natural experiment in China to address the lack of counterfactuals. MLF is a monetary policy tool that allows eligible commercial banks and policy banks to borrow from PBoC with collaterals. On June 1, 2018, the PBoC for the first time made (1) corporate bonds; (2) bonds issued by small and micro firms (Xiaowei Bonds); (3) bonds to support the green economy (Green Bonds); and (4) financial bonds serving agriculture and rural areas (Sannong Bonds) that are rated AA or higher eligible as collateral for a Medium-term Lending Facility (MLF). Prior to the expansion, MLF only accepts Treasury bonds, central bank bills, policy bank financial bonds, municipal bonds, and AAA corporate bonds as collateral. Importantly, the policy only applies to targeted bonds in the interbank market, but not to the same dual-listed bonds in the exchange market. This enables us to take a triple-difference approach to identify the effects of the policy. By comparing the change in the difference in spreads between newly eligible bonds and other bonds in the interbank market before and after the shock, with the difference of spreads of dual-listed eligible bonds and other bonds in exchange market as counterfactuals, we can identify the causal effect of the collateral-based policy on bond prices.

The Effect on Bonds in the Secondary Market

We use daily bond transaction data from Jan. 1 to Sept. 30, 2018 obtained from WIND to identify the effect of the expansion of MLF collateral in the secondary bond market. We find that the collateral-based monetary policy effectively decreases the spreads of the treated bonds in the interbank market. The policy leads to an average reduction of the spreads of the newly collateralizable bonds by 42–62 basis points (bps)—which is about 13–20 percent of the mean spreads—in the interbank market compared to the dual-listed bonds in the exchange market (see Figure 3 for parallel trend analysis of the policy effect).


Figure 3: Parallel Pre-Trend and Time Patterns of Policy Effects in the Secondary Market 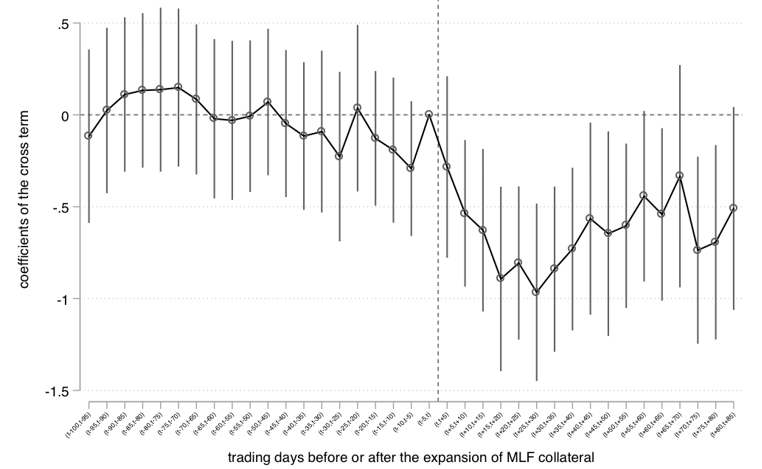 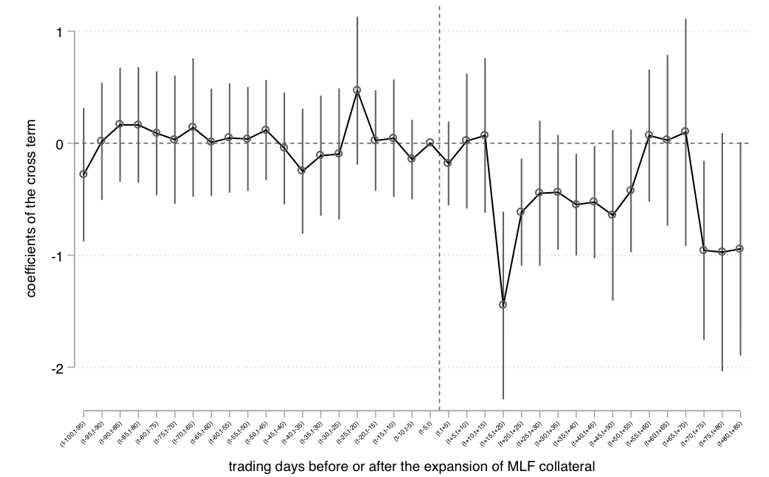 (b) Dual-listed Bonds Only

Note: Figure 3 plots the 5-day change in spreads of bonds in secondary market before and after the MLF policy on June 1st, 2018, ceteris paribus. Each dot in the window [t-5 + 5k, t + 5k] stands for the point estimate of coefficient of DDD term. The vertical whisk around the point is the associated 95 percent confidence interval. The point in the window [t-5, t] is normalized to 0. Panel (a) presents result from regression using a sample of AA, AA+, and AAA enterprise bonds and financial bonds. Panel (b) presents results from regression using dual-listed bonds. For details of sample construction, please refer to our paper.

We further decompose the bond spread into liquidity risk premium and default risk premium, and find that the reduction in the spreads of the treated bonds in the interbank market is mostly attributed to a reduction in the perceived default risk instead of the market liquidity risk (see Table 2). This is consistent with the leverage theory from Geanakoplos (2010), which argues that a lower haircut of the collateral increases the leverage of the optimists, who holds beliefs of lower default risk; since these optimists are marginal buyers, their higher leverage ratio can push up asset prices. It is also consistent with the view that the treated bonds are less likely to default because the funding costs of rolling over these bonds are now lower.

Table 2: Liquidity Spread vs. Default Spread in the Secondary Market

Note: Standard errors are clustered at the bond level. ***, **, and * represent statistical significance at 1, 5 and 10 percent, respectively.

We find that making the treated bonds collateral-eligible for MLF in the interbank (secondary) market also reduces their spreads at issuance in the interbank market by 53.8 basis points, ceteris paribus. That is, the pass-through rate is between approximately 85 percent and as high as more than 100 percent. Since the spread reduction of the newly issued collateral-eligible bonds reflects a reduction in the funding cost of new real investments, our estimated high pass-through rate to the primary bond issuance market thus indicates a real effect of the collateral-based monetary policy.

Figure 4: Parallel Trend and Dynamic Effects in the Primary Market 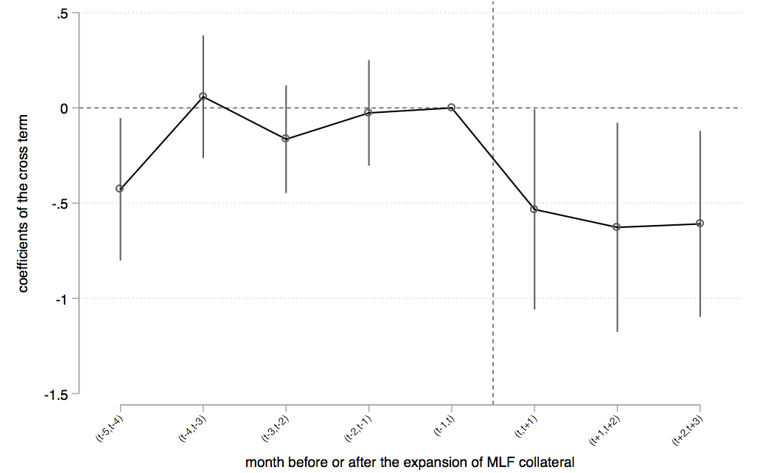 Note: Figure 4 plots the monthly change in spreads of bonds in the primary market before and after the MLF policy on June 1st, 2018, ceteris paribus. Each dot in the window [t-1 + k, t + k] stands for the point estimate of the coefficient of DDD terms. The vertical whisk around the point is the associated 95 percent confidence interval. The point in the window [t-1, t] is normalized to 0.

Using bond issuance data from Jan. 1 to Dec. 31, 2018, we find that after June 1, 2018 the odds of bonds being issued in the interbank market relative to that in the exchange market for treated bonds went up by over 60 percent, compared with controlled bonds.

The findings in this paper suggest that collateral-based monetary policy affects both the financial market and the real economy. Collateral-based monetary policy provides more policy space alongside the traditional interest rate policy. To achieve better execution of the new tools, the central bank can manage a collateral basket. By changing the eligibility and haircuts of the collateral in the basket (intensive margin) and changing the composition of the collateral in the basket (extensive margin), central banks can better navigate and moderate financial cycles and business cycles.