Evaluation of public employees performance is essential to induce higher work efforts. We use an experiment in two provinces of china to explore how to design such evaluation. Results show that the incentive effect of evaluation can be larger if the employee does not know ex-ante who the evaluator will be, thus reducing attempts at personally influencing the evaluator and enhancing instead job achievements. 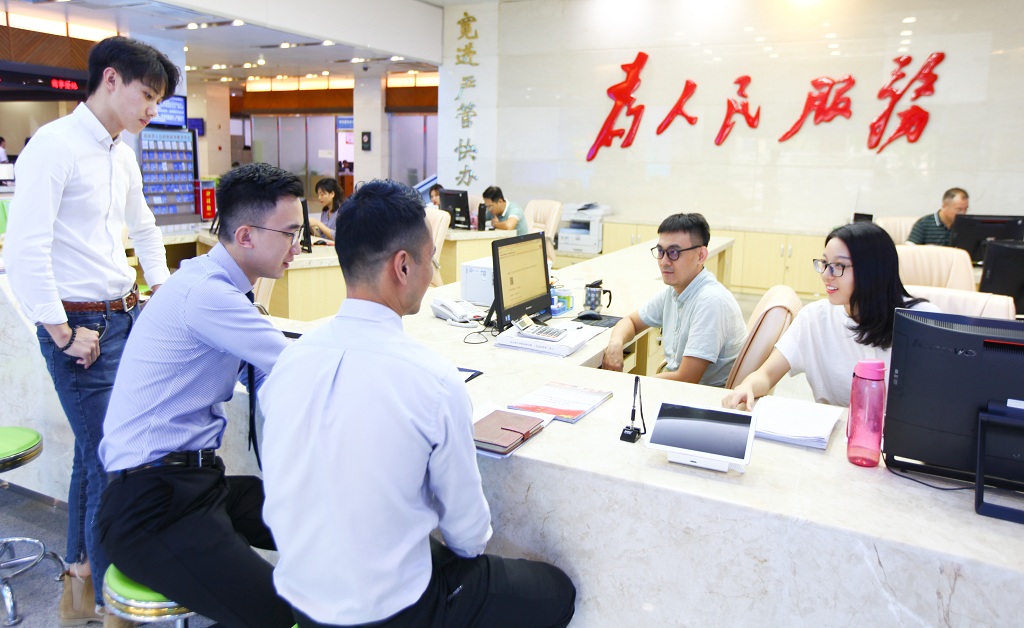 Subjective performance evaluation is widely used by organizations to incentivize their employees. This is especially true in the public sector, as most civil service jobs are inherently multidimensional and vaguely defined, making it almost impossible to set precise and objective measures of work performance.

Economists have long conjectured that “leader subjective evaluations” could induce “influence activities”: under such evaluations, agents might make efforts to please the evaluating leader, rather than perform tasks that could benefit the organization (Milgrom and Roberts 1988; Milgrom 1988). But despite the prevalence of subjective evaluations and rich theoretical insights on the topic, there has been little rigorous empirical evidence on the existence and implications of influence activities. We have worked to fill this gap by conducting a large-scale field experiment among rural civil servants in China.

In 2006, the Chinese government launched the “3+1 Supports (San Zhi Yi Fu)” program, through which thousands of college graduates are hired each year to serve as entry-level civil servants in rural townships. Every college graduate civil servant (CGCS) receives a two-year contract from the provincial government, and upon finishing the term, one of the two township leaders (township chief or township party secretary) gives them a (subjective) performance evaluation, which determines whether or not they will be promoted to a formal civil servant position. Given that formal civil servant jobs are considered prestigious, most CGCSs are highly motivated to receive positive evaluations from their leaders. This gives them a strong incentive to personally influence the evaluating leader, whose identity is revealed to them ex ante in the current practice.

In the revealed scheme, since the evaluator and non-evaluator were randomly assigned, in the absence of any evaluator-specific influence activities, both leaders should on average be equally positive about the performance of the CGCS. However, as shown in Figure 2, when we collected the CGCS performance assessments from both leaders in the exit survey, the randomly chosen evaluator was significantly more positive about the CGCS, compared to his/her(randomized) non-evaluating counterpart. This suggests that the CGCS was indeed willing and able to engage in evaluator-specific influence activities to improve the evaluation outcomes. In comparison, in the masked scheme, the CGCS no longer knew where to direct influence activities, and subsequently we observed no asymmetry in the assessments of the two leaders. 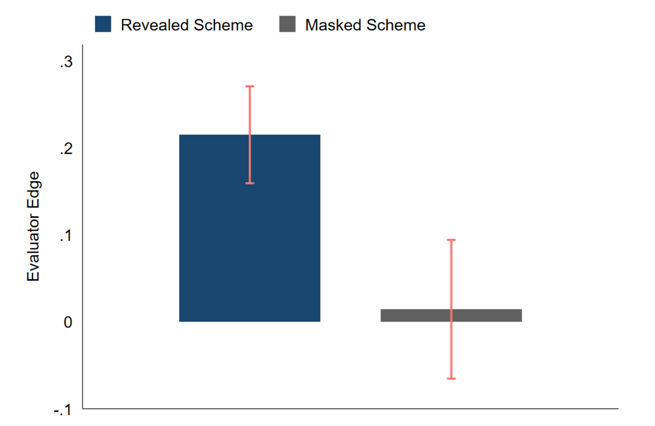 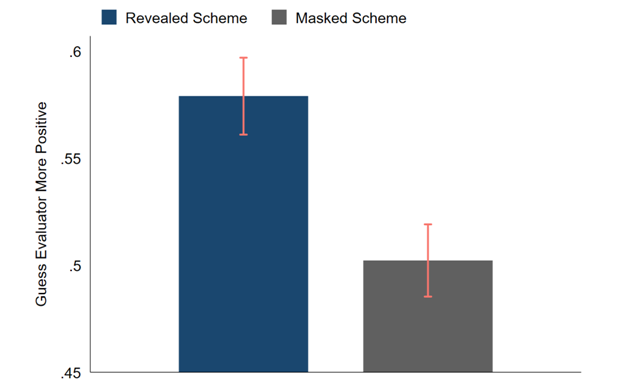 Note: The outcome measures the ratio of colleagues guessing the evaluator would be more positive about the CGCS than the non-evaluator.

When we switched from the revealed scheme to the masked scheme, from the CGCS’s perspective, leader-specific influence activities became riskier and less beneficial, because the leader who was influenced might not be the evaluator. This incentivized the CGCS to reallocate efforts from “leader-specific influence activities” to “common productive dimensions” that would be appreciated by both leaders. Therefore, we expected that there would be an improvement in work performance when we masked evaluator identity. Consistent with this hypothesis, we found that the average colleague assessment of CGCS performance was significantly higher in the masked scheme than in the revealed scheme (Figure 4), and so is the average leader assessment. In addition, we found that CGCSs under the masked scheme earned higher monthly performance pays. Since performance pays are directly determined by simple objective indicators such as overtime work and nighttime shifts, this finding suggests that the improved work performance could also be benchmarked with objective measures. In the paper, we further rule out other potential alternative explanations for our findings. 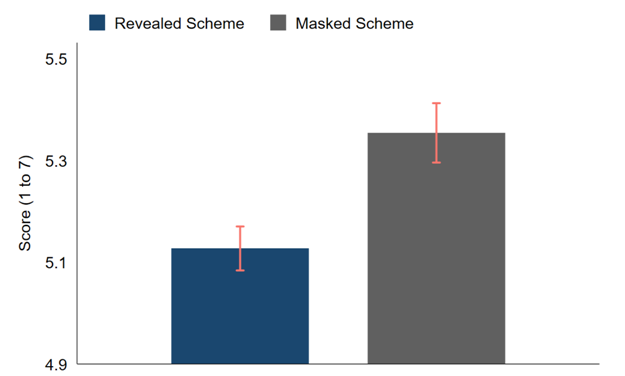 Note: The outcome is the average assessment score of CGCS performance given by colleagues, on a scale of 1 to 7.

Our paper providesthe first rigorous empirical evidence of the existence and implications of influence activities. We found that state employees a reable touse evaluator-specific influence to affect evaluation outcomes, and that this process is partly observed by their co-workers. Moreover, our findings have important policy implications. We found that by randomizing the identity of the evaluating supervisor, which has minimal implementation cost, the government could significantly improve the job performance of its employees. Tailored versions of our intervention could potentially be applied to the more than 50 million state employees in China, and might be useful in other contexts where high-stakes rewards depend on subjective evaluations in the corresponding hierarchy.


(Alain de Janvry is a Professor of Agricultural and Resource Economics and Public Policy at the UC Berkeley; Guojun He is an assistant professor in the Division of Social Science, Division of Environment & Sustainability, and Department of Economics at The Hong Kong University of Science and Technology; Elisabeth Sadoulet is a Professor of Agricultural and Resource Economics at UC Berkeley; Shaoda Wang is an applied economist based at the University of Chicago; Qiong Zhang is Associate Professor in the School of Public Administration and Policy at Renmin University of China.)