Resolving Zombie Firms is Key for Sustaining Growth in China

China’s non-financial borrowing continued to expand though the government vowed to take deleveraging among its top five policy priorities in 2016. Current member of the People’s Bank of China’s Monetary Policy Committee, Prof. Yiping Huang of Peking University, and his co-author Yuyan Tan of Peking University argue that resolving Zombie firms is a key for China’s deleveraging. The rising share of Zombies firms in China after 2010 reduces the financial efficiency and brings in financial market risks. Dealing with the Zombie firms is now critical for sustaining China’s long-run economic growth and managing its financial stability.

At the start of 2016, the Chinese government identified deleveraging as one of its top five policy priorities. However, according to the Bank of International Settlement data, China’s non-financial borrowing rose to 256 percent of GDP at the end of the third quarter of 2016 from 239 percent the year before. Non-financial corporate borrowing also increased to 166 percent of GDP from 158 percent. Should the public simply interpret these numbers as evidence of the failure of the deleveraging policy?

Deleveraging is difficult by definition. International experiences point to two general options for effectively reducing leverage ratios. At the macro level, deleveraging often takes place after a financial crisis when large numbers of inefficient firms go bankrupt. At the micro level, targeted restructuring of these financially-troubled zombie firms may also lower the average leverage ratio. The Chinese government unlikely to voluntarily choose the first macro-level option. However, the Chinese government is also unwilling to simply let the zombie firms fail.

The term “zombie” was first used in economics by Kane (1989) to describe an insolvent bank that was kept alive during the Savings and Loan Crisis in the United States in the 1980s. The term is best-known for describing the economic situation in Japan in the 1990s after their asset bubble burst. There are two related criteria for identifying zombie firms: 1) If a firm receives subsidized credit (Caballero, Hoshi, and Kashyap, 2008); and 2) If a firm’s profit is less than the interest subsidy (Fukuda and Nakamira, 2011). Several empirical studies discovered important contributions of zombie firms to Japan’s economic stagnation in the 1990s (e.g., Ahearne and Shinada 2005).

The same scenario may now be happening in China. According to Tan (2017), the proportion of zombie firms in China’s industrial sector rose again in recent years after a steady decline following the Asian financial crisis (Figure 1). The latest rebound of zombie firms was probably related to the aftermath of the massive stimulus package introduced in 2009 and the persistent moderation of growth after 2010.  Tan, Huang, and Woo (2016) identified a number important factors contributing to the probability of zombie firms in China: old and large firms in capital-intensive industries and regions where government intervention is more extensive.


Figure 1: The Proportion of Zombie Firms in Chinese Industry (%) 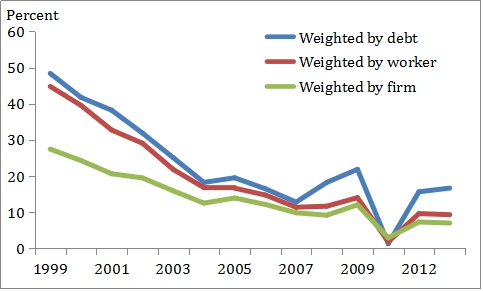 In a way, zombie firms have become a major source of economic and financial problems in China today. On one hand, they are an important cause of China’s high corporate leverage problem. According to Tan, Huang and Woo (2016), the average debt-asset ratio was 72 percent for zombie firms but only 51 percent for normal firms. Deleveraging is impossible without decisively resolving the existence of zombie firms. On the other hand, zombie firms hold back the progress of industrial upgrading in many regions. When these factors are combined, they contribute to declining financial efficiency and rising financial risk. For instance, the incremental capital-output ratio rose from 3.5 in 2007 to 6.2 in 2016 (Figure 2). Again, the commercial banks’ average non-performing loan ratio at the end of 2016 was also 75 percent higher than three years earlier. 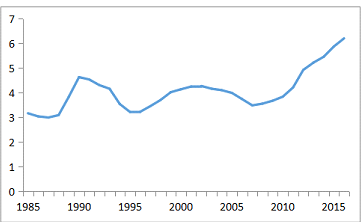 Dealing with the zombie firms is now critical for sustaining economic growth and maintaining financial stability in China. In fact, the Chinese government has been previously successful in getting rid of loss-making state-owned enterprises (SOEs). In the mid-1990s, the state industry made net losses and the government had to adopt a decisive restructuring program called “grasping the big and letting go the small and medium.” Within a couple of years, about half a million small- and medium-sized loss-making SOEs disappeared.

So why is the government so reluctant to resolve the problem of the zombie firms this time? One of the important reasons is that, unlike in the 1990s, most of the zombie firms today are gigantic in size. According to our calculation, in 2013, they accounted for about 20 percent of total industrial borrowing and 10 percent of the industrial workforce (Figure 1). More importantly, they are geographically concentrated, especially in Northeast China. These zombie firms may account for one-third or even half of local employment in certain municipalities.

The key test is whether or not the government can truly enforce market discipline in the spirit of its decision at the 3rd Plenum of the 18th Party Congress, namely “letting market mechanism play decisive role in resource allocation.”

The Chinese government has devised a series of measures to restructure financially-troubled SOEs, including introducing mixed ownership, debt-to-equity swaps, and public-private partnerships. These will only be good programs if they are implemented following market principles. For instance, if private capital that own shares in SOEs cannot exert any influence, it is difficult to form a viable mixed ownership. Again, if creditors cannot freely make their decisions in choosing target firms, then they won’t participate in the debt-to-equity swap program. Even if such a swap occurs, it would look more like a government-sponsored program and would only temporarily ease the financial burdens of the zombie SOEs.

Mixed ownership and debt-equity swap programs are suitable only for those zombie firms suffering from temporary financial problems. For those zombie firms encountering continuous losses, decisive actions are required to shut them down. The greatest difficulties in closing down large zombie firms include the settlement of workers and resolution of debts. These problems are often too big for local governments to handle. Therefore, the central government should step in to ease the pain by setting up a special fund for dealing with zombie firms. Creditors and investors of zombie firms should bear the consequences of their past decisions. The workers in these firms need to be taken care of in order to maintain social stability.

According to a calculation by Tan, Huang, and Woo (2016), after the exit of the zombie firms from the market, annual industrial output growth could be lifted by as much as 2.12 percentage points. Capital growth would increase by 1.4 percent. Growth of employment would rise by 0.84 percentage points a year. Finally, TFP growth may be lifted by 1.06 percentage points a year. All of these results mean that the short-term stress in the labor market can actually lead to a lower unemployment rate and higher sustainable growth in the long-run.