Does VAT Have Higher Tax Compliance Than a Turnover Tax? Evidence from China

We study the effects of compliance with the value-added tax (VAT) by exploiting the reform that replaced business tax (BT) with VAT in China beginning in 2012. We find that replacing the BT with VAT significantly increases the reported sales and costs for treated firms, and the impact is much stronger for business-to-business (B2B) transactions than for business-to-consumer (B2C) transactions. Buyers in B2B transactions have a stronger incentive to claim invoices for input tax credit and reduce their tax liability. In B2C transactions, however, individual consumers do not need VAT credit, the reform has little impact. Moreover, firms report that since the reform they have incurred greater costs to offset their tax liability. The results indicate that VAT has a higher rate of tax compliance than a turnover tax and that the VAT system has self-enforcing properties with regard to B2B transactions. 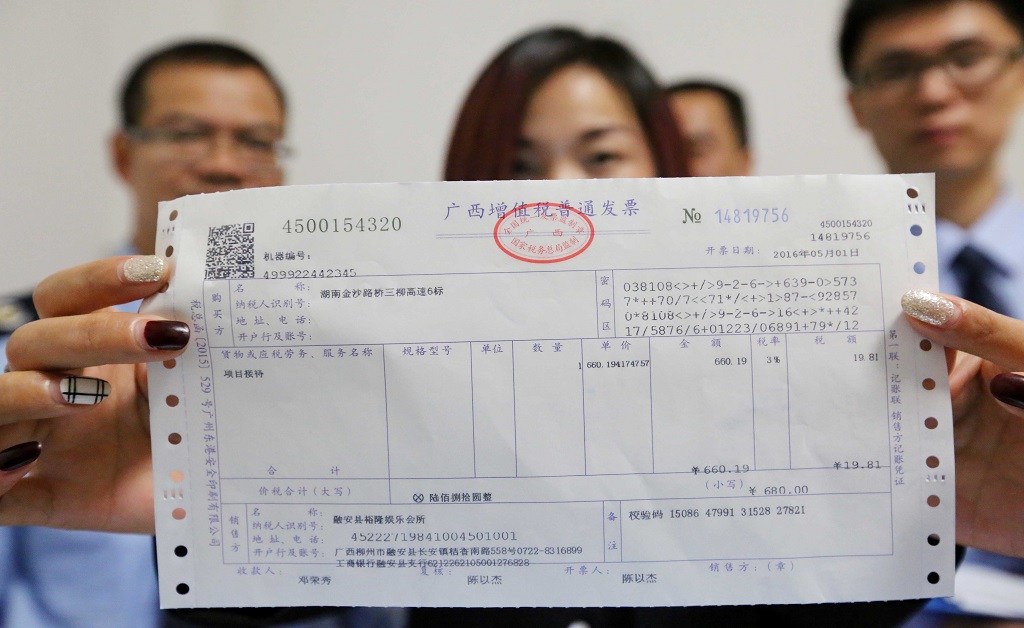 Nearly all countries have now adopted VAT, and it has become the major source of revenue for governments around the world, including China. Compared to other indirect taxes, such as the BT, VAT has attracted increasing attention because it is self-enforcing. Figure 1 documents the importance of VAT and BT in China over time. VAT and BT generate approximately 40 percent of China’s total tax revenue in recent years, and VAT has always been its most important source of tax revenue. If we have perfect enforcement, there is no distinction between VAT and its alternative indirect taxes. Researchers have studied how VAT functions as a self-enforcing tax (Pomeranz, 2015; Waseem, 2017), yet they have provided little evidence comparing the compliance effect of VAT as opposed to its alternatives. This paper (Li and Wang, forthcoming) fills this gap in the literature.

Figure 1: The Importance of VAT and BT in China Over Time 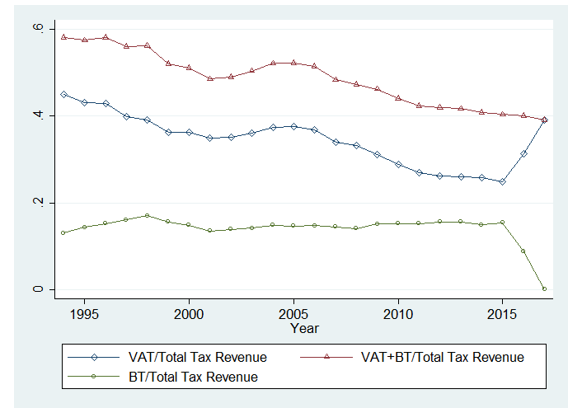 Note: This figure reflects the ratio of VAT and BT to total tax revenue over time. VAT revenue here does not include revenue from imports. The source of all data is the China statistical yearbook. On May 1, 2016, China implemented the BT-to-VAT reform across the country, therefore sales tax revenue became zero since 2017.

The VAT has a built-in self-enforcement mechanism. Firms can legally claim tax credits only for purchases they make from suppliers that comply with the tax. One firm’s revenue should be equal to the cost the buyer pays, and this inherently requires reporting—as well as an asymmetric incentive to misreport. Consequently, it is easy to detect tax evasion (Kopczuk and Slemrod, 2006; Slemrod and Gillitzer, 2014). In this paper, we study the effect of compliance with VAT compared to business tax by exploiting the reform in China to replace the Business Tax with VAT. In 2012, the Chinese government implemented a staggered reform to replace BT with VAT. The reform began in several service industries in a few provinces and then gradually spread to other industries and provinces. The unique setting provides a chance to identify the causal effect of VAT on tax compliance and the self-enforcing properties of VAT compared with BT—a kind of turnover tax. We use the data of publicly listed companies from 2010 to 2016 and a difference-in-difference-in-difference (DDD) estimation strategy.

China’s tax reform in 1994 enacted a bifurcated system of indirect tax that included VAT and BT. At that time, VAT applied to the supply and importation of goods as well as the provision of repair, processing, and replacement services—which levied mainly on manufacturing firms. The BT is a turnover tax applied to the remaining services and the transactions of intangible assets and immovable properties at various tax rates—levied mainly on firms providing modern services. The BT, as a turnover tax, cascaded throughout supply chain.

To eliminate the cascading effect and enforce tax collection, the Chinese government implemented the BT-to-VAT reform step by step from 2012 to 2016. The unique setting allows us to compare the effect of compliance with VAT to that of compliance with BT. A simple example illustrates how VAT and BT affect a firm’s incentives, for a cell phone assembler that buys all the electronic elements and ultimately sells the phone to a retailer. Under VAT, the tax base is value-added (the transaction price between the assembler and the retailer minus the cost of the electronic elements), and both the assembler and the retailer can get full credit for the VAT they paid for their input costs. Thus, a VAT leaves production undistorted, as it does not affect the prices firms ultimately pay for inputs. However, under a BT, the tax is levied on the sales price at each stage, thus creates a cascading cost, a tax upon a tax, as goods pass from one stage to the next. The retailer needs to remit the BT of the BT that assembler has already remitted. The tax cascading effect of BT distorts decisions firms make about business production and spoiled the VAT deduction chain, and thus discourages the specialization of certain service sectors (Shen and Krever 2017).

Figure 2 plots the trend of reported sales and reported costs for reformed sectors before 2016 and nonreformed sectors before 2016. We use sectors that were not affected by the reform until 2016 as the control group. The difference between reformed and non-reformed service sectors gradually lessens starting in 2012, with the expansion of BT-to-VAT reform. We define the “Treatment group” as sectors reformed before 2016, when more firms started to be treated in the “treatment group” the gap between the two groups narrows over time. Therefore, the graphic evidence captures only the lower-bound of the impact of the reform. As the figure shows, the mean of logarithm of sales and cost is largely parallel before the BT-to-VAT reform.

Figure 2A: Mean of log (Reported) Sales by Treatment Group and Control Group 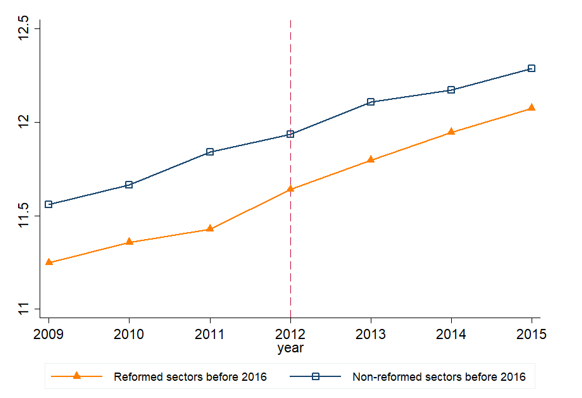 Figure 2B: Mean of log (Reported) Costs by Treatment Group and Control Group 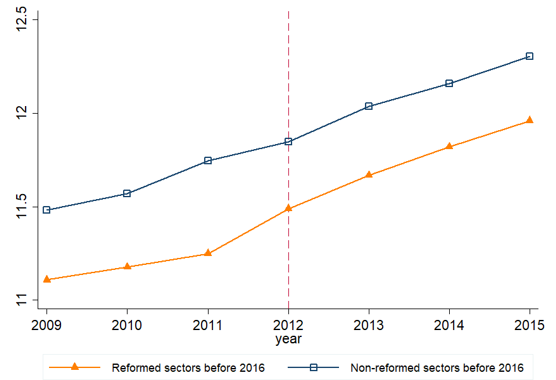 Our analysis yields several interesting results. First, we find that the reform that replaced BT with VAT significantly increased both reported sales and reported costs by about 13 percent. Furthermore, we study the mechanism of the reform by looking at differential effects on downstream and upstream firms. The effect is much stronger among B2B companies, because the downstream firms have a strong incentive to claim invoices from sellers to deduct their VAT liability. However, the reform has no significant effect on the B2C companies, because consumers who do not need VAT credit have no incentive to claim an invoice. This finding is consistent with Liu, Lockwood, and Almunia (2017) and Pomeranz (2015). Last, we find that the reform also increases the firm’s reported cost to offset the tax liability and that this cost increase exceeds sales, which makes unclear the overall impact of tax payments of treated firms. However, the increased cost stems from sales by other firms, so the overall impact on tax revenue remains positive. We also find that the reform has less impact on state-controlled companies than that on non-state-controlled companies. This is consistent with the fact that companies controlled by the government have higher rates of tax compliance than non-state controlled enterprises.

To establish the causal relationship, we must rule out two alternative explanations. First, the BT-to-VAT reform has also created effective tax rate (ETR) changes. The reform was designed as a significant policy to cut taxes. We must test whether the effect stems from the ETR change or its enforcement. The analysis above of the B2C share suggests that enforcement is driving the treatment effect; if it is due to real effects, the impact of reform on both B2B and B2C companies should be similar. To exclude the impact of tax rate change from BT-to-VAT on our conjecture about the effects of VAT compliance, we include the interaction terms between the variable indicating the BT-to-VAT reform and the ETR at industry level, to capture the impact of the tax rate change. We do not see ETR playing an important role here and thus conclude that the effect comes from enforcement.

Second, the reform replacing BT with VAT also changes the tax collection agency. BT and VAT were collected by the Local Taxation Bureau (LTB) and State Administration of Taxation (SAT), respectively. Companies that remitted BT to LTB before the reform remitted their VAT to SAT after the BT-to-VAT reform. Our main effect may come from the SAT’s higher collection capacity. Shanghai city has always had only one collection agency, and the BT-to-VAT reform did not change Shanghai’s tax collection bureau of VAT or BT. We compare Shanghai with Zhejiang and Jiangsu, two provinces adjacent to Shanghai with a similar level of economic development to Shanghai. If our main result were driven by the change in tax collection agency, then the treatment effect would differ significantly among Shanghai and the two adjacent provinces, but we did not find any difference.