Exporting out of Agriculture: The Effects of the China Shock in China

This paper analyzes the effect of China's 2001 accession to the World Trade Organization on structural transformation at the local level, exploiting cross-sectional variation in tariff uncertainty faced by county economies pre-2001. Using a new panel of 1,800 Chinese counties from 1996 to 2013, we find that counties more exposed to the reduction in tariff uncertainty post-accession are characterized by increasing exports and foreign direct investment, shrinking agricultural sectors, expanding secondary sectors, and higher total and per capita GDP. In addition, when labor substitutes from non-agricultural to agricultural production in counties exposed to positive trade shocks, agricultural output declines. 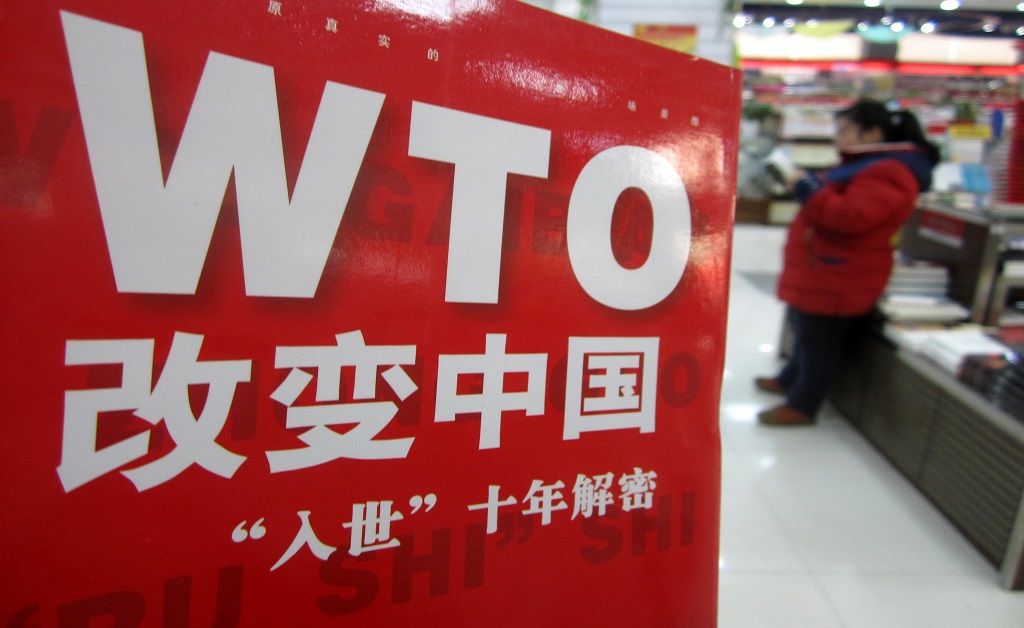 China has undergone remarkable structural transformation over the last twenty-five years. Total employment in the agricultural sector fell from 60% of total employment in 1990 to 28% in 2015, and this sectoral shift was matched by unprecedented growth in non-agricultural output. At the same time, China emerged as the manufacturing powerhouse of the world. While this transformation can be traced to the onset of market-oriented reforms in 1979, the pace of the structural shift accelerated following China’s accession to the World Trade Organization in 2001.

This record of growth has generated robust debate about its causes. While some analysts argue that trade liberalization stimulated economic growth (Sun and Heshmati 2010; McMillan et al. 2014), there is relatively little direct evidence of this relationship, and more generally, Goldberg and Pavcnik (2016) conclude in a recent review that there is only limited empirical evidence of the relationship between trade policy and growth. In contrast, a large body of literature argues that internal policy reforms, particularly reforms regarding state-owned enterprises and the creation of Special Economic Zones, were crucial in enabling China to increase productivity and realize its comparative advantage in manufacturing (Song et al. 2011; Autor et al. 2016).

In a recent paper, we provide new evidence about the effects of China's WTO accession on structural change and growth at the local level by analyzing a newly assembled panel of approximately 1,800 counties observed between 1996 and 2013 (Erten and Leight  2019) (see Note 1). China's WTO membership significantly reduced uncertainty about U.S. trade policy vis-a-vis China, generating a substantial increase in both total Chinese exports to the U.S. and total exports. We compare counties differentially exposed to the reduction in tariff uncertainty to identify the benefits of these export access shocks and present evidence that these shocks led to significant growth in exports and foreign direct investment in more-exposed regions. This in turn stimulated a reallocation of labor and capital from agriculture into manufacturing and services and generated a significant increase in county-level output.

China’s accession to the WTO

China’s accession to the WTO was the culmination of a complex and lengthy process of negotiation. Prior to accession, China's Normal Trade Relations (NTR) status  (see Note 2)in the U.S. market required annual renewal by Congress, a process entailing considerable risk; if the renewal had failed, Chinese exports would have been subject to the much higher rates reserved for non-market economies. For example, in 2000, the average U.S. NTR tariff was 4%, but China would have faced an average non-NTR tariff of 31% had its status been revoked. The U.S. permanently granted NTR status to China as of 2002; there were no other discontinuous changes in Chinese access to other markets at that point.

Our analysis utilizes variation across industries in the gap between the lower tariffs applied to most favored nation tariffs and the higher non-market rates, in conjunction with variation across counties in the composition of employment by industry reported in the 1990 census. For each county, we calculate a variable denoted “NTR gap” that is equal to the weighted average of the tariff gap across local industries operating in the county; the weights used are employment weights constructed using each industry’s share of local employment in 1990. Intuitively, a county with a high NTR gap was exposed to a high level of uncertainty prior to WTO accession because its key industries risked high tariffs, and thus benefited more from the removal of this uncertainty.

The empirical strategy is a difference-in-difference, following related literature including Pierce and Schott (2016). Additional robustness checks demonstrate no evidence of statistically significant pre-trends, and the primary results are also robust to a range of controls allowing for differential trends for counties with different characteristics at the baseline.

Table 1 summarizes our primary results. Counties more exposed to tariff uncertainty prior to 2001 experienced significantly faster growth in exports, greater expansion in the secondary sector, and more rapid increases in total and per capita GDP following WTO accession. This export-driven expansion also has ancillary effects on other sectors: productive factors shift out of agriculture, agricultural production declines, tertiary output expands, and there is some evidence of in-migration (see Note 3). Using firm-level data, we document that more-exposed regions also experience an increase in value-added per worker in manufacturing and a corresponding rise in wages. 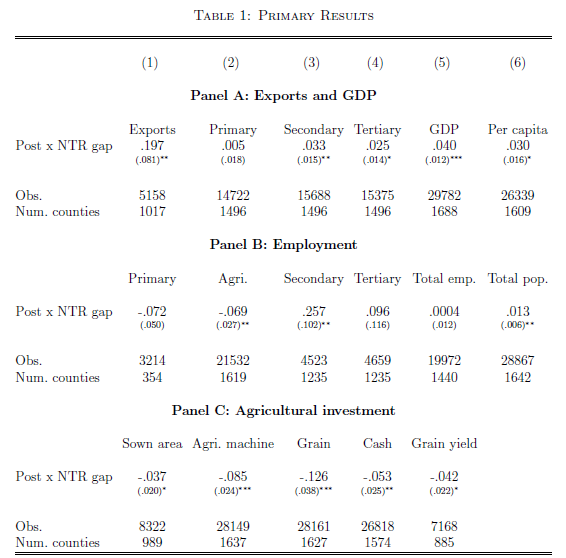 Figure 1 captures the core result graphically. Prior to 2002, there is little evidence of any significant difference in county-level output comparing across counties with high and low NTR gaps. Post-2002, however, the gap emerges and becomes significant and positive, suggesting that counties that benefited more from the reduction in tariff uncertainty are growing more rapidly. A number of robustness checks explore whether the results are robust to correcting for any differences in growth rates comparing across high NTR and low NTR counties prior to 2002, and the positive effect of the NTR shock is persistent and significant. 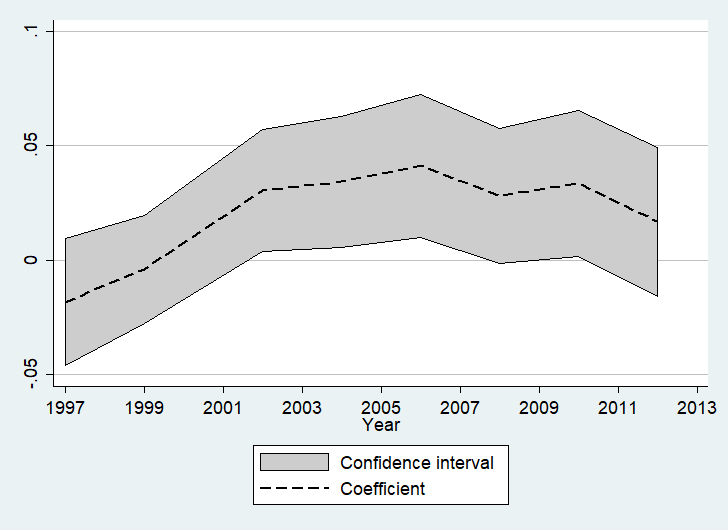 Finally, it may be useful to present some simple back-of-the-envelope calculations that quantify the contribution of the reduction in trade uncertainty generated by WTO accession to shifts in aggregate productivity and growth in China over this period. First, we can quantify the contribution of labor reallocation across sectors (from agricultural production to non-agricultural production) to aggregate productivity following McCaig and Pavcnik (2018). A growing body of literature has documented that value-added per worker is significantly higher in non-agricultural compared to agricultural production in developing countries (Gollin et al. 2014), and we can replicate this stylized fact using national data reported on value-added and employment per sector; this data suggests a productivity gap of around six between the secondary and primary sector, or four if adjusted for different human capital stocks. Given this gap, the shift of workers from the primary to the secondary sector of the magnitude observed suggests an increase in productivity of at least 10%, and up to 38%.

We can also explore the importance of WTO accession in overall growth in county-level GDP during this period. The average county in this sample shows GDP growth of 1.2 log points in the post-WTO period. Our results suggest that for a county characterized by a mean NTR gap, the reduction in tariff uncertainty in the U.S. market to zero results in an increase in GDP of .1 log point. Accordingly, export-driven growth enhanced by WTO membership accounts for approximately 10% of overall GDP growth. This suggests that the contribution of reduced trade uncertainty to county-level growth is non-trivial, though clearly only a part of the overall story of Chinese growth during this period.

Importantly, the evidence of contraction in agricultural output in counties more exposed to positive export shocks inducing factor substitution into non-agricultural production is inconsistent with the predictions of a classic surplus labor model. Rather, this pattern is consistent with other recent work arguing that stocks of surplus labor in rural areas have largely been depleted as China reaches the Lewis turning point (Zhang 2011, Kwan 2018). Once an economy has passed this turning point, agricultural output begins to contract as labor substitutes out of agriculture.

In recent years, a growing economic and policy debate has highlighted the evidence around the adverse effects of increasing exports from China on economic, social, and even political outcomes in the U.S. and Europe. This paper seeks to quantify the positive China shock as experienced by China. Our findings suggest that reduced trade uncertainty accounted for approximately 10% of total output growth during this period, and that substitution of productive factors into non-agricultural production generated an increase of at least 10% in aggregate productivity. This evidence serves as a first step to addressing the evidence gap identified by Goldberg and Pavcnik (2016) about the relationship between trade, growth, and structural transformation in the developing world.

Note 2: NTR status is also referred to as MFN status in the U.S. For conciseness, we will employ the NTR term here.

Note 3: There is evidence of a significant decline in agricultural labor, sown area, grain output, cash output, and grain yield; however, the coefficient on primary GDP is zero and insignificant. This pattern may reflect a price effect in general equilibrium (as agricultural output contracts, prices rise); unfortunately, this analysis does not have access to detailed price data to evaluate this channel. A more detailed analysis presented in the paper suggests that primary GDP does begin to contract in the second half of the period (post-2008) in counties exposed to greater reductions in tariff uncertainty.

[Jessica Leight is a Research Fellow in the Poverty, Health and Nutrition Division at the International Food Policy Research Institute (IFPRI).]

Sun, Peng and Almas Heshmati, “International trade and its effects on economic growth in China.” IZA Discussion Paper No. 5151, 2010.