We propose a method to estimate the perceived likelihood of an uncertain increase in tariffs using the rise in trade flows in advance of the uncertainty resolution. We apply this framework to the uncertainty surrounding the U.S.’s annual renewal of China’s most-favored-nation (MFN) status in the 1990s. By matching the observed rise in imports in advance of U.S. Congress votes on the renewal, we find that the probability of non-renewal was low throughout the decade of uncertainty. Our estimated probability peaked in 1994 at 11 percent, decreased thereafter, and became negligible by the end of the decade. The mechanism we study raises a firm’s inventory costs and leads to a lower volume of trade when aggregated to the annual level. 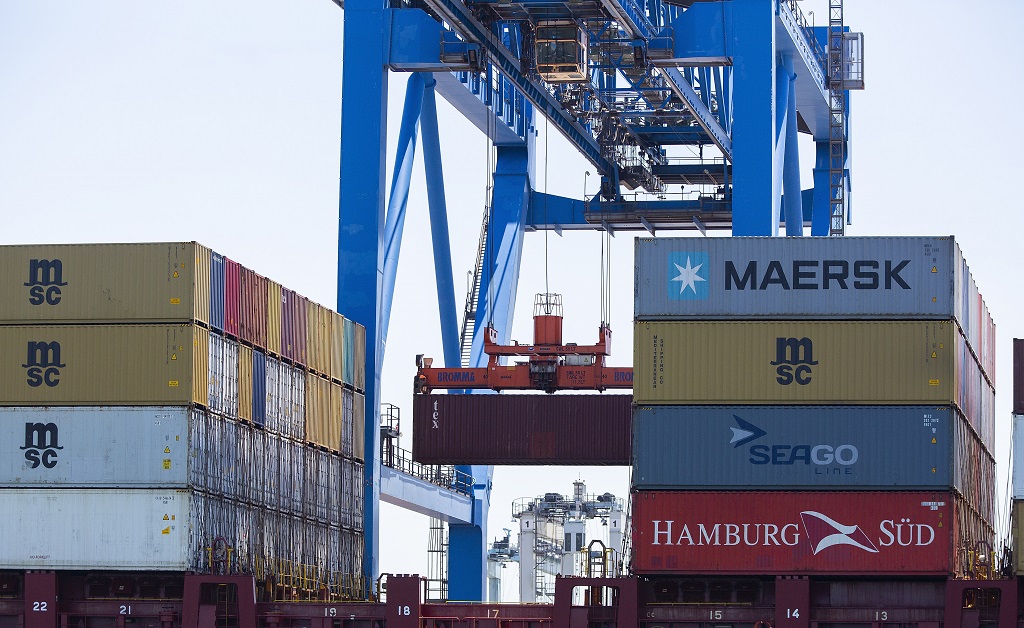 Recent backlash against globalization has created uncertainty about the path of future trade policy and has led business and households to act in advance of these potential policy changes. In the lead-up to Britain’s presumed “Brexit” from the European Union on March 29, 2019, the media featured many stories of Londoners stockpiling Nutella and other Continental goods (see Note 1). Once the deal was delayed for six months, and Britons maintained their access to E.U. goods at least in the near-term, the stories instead chronicled how Londoners were munching their way through their stockpiles of Nutella and other items that have a short shelf-life (see Note 2). This cycle may repeat itself as we near another possible Brexit deadline. The snacking behavior of these Londoners reveals that, when goods can be stored, consumers and firms make forward-looking decisions in advance of an uncertain change in trade barriers. These trends also reveal how uncertainty about a potential increase in trade barriers can increase trade in the short run, by providing a counterpoint to the trade-dampening effects of trade policy uncertainty (emphasized by Handley and Limao 2017) based on China-U.S. trade prior to China’s accession tothe World Trade Organization (WTO).

Our recent working paper revisits how the U.S. Congress’ annual renewal of China’s preferential access to the U.S. market affected China-U.S. trade. Using within-year trade flows, we identify an increase in imports of certain goods before Congress’ vote and subsequent  decline in imports  after China’s MFN status was renewed. This cycle of stockpiling and destocking is especially strong in more storable goods. We then use the institutional features about trade policy and an off-the-shelf model of firms placing infrequent orders to economize on fixed ordering costs (an sS inventory model) to recover a time-varying probability of non-renewal that yields a somewhat lower estimate of the likelihood of non-renewal than found elsewhere. We also use the model to show that uncertainty about trade policy has a relatively minor effect on trade flow dynamics relative to the expected changes in tariffs.

Firms making long-term decisions, such as whether to engage in foreign markets, must form expectations over the future path of tariffs. Forecasting this path can be challenging, given that the timing, size, and likelihood of policy changes are all uncertain. This post focuses on measuring trade policy uncertainty using firms’ behavior in anticipation of a trade policy change in circumstances under which we know the timing and size but not the probability (Alessandria, Khan and Khederlarian 2019). In anticipation of a possible increase in trade barriers, firms find it optimal to stockpile the necessary inputs and the degree of this anticipatory stockpiling is directly proportional to the probability they place on the event. We apply this methodology to the uncertainty surrounding the annual renewal of China’s MFN (Most Favored Nation) status by the U.S. President and its subsequent approval by the congress during the 1990s. We find that non-renewal of China’s MFN status was considered a low probability event by the importers.

Beginning in 1980, before its accession to the WTO, China’s MFN status in the U.S. was subject to annual Presidential renewal (which expired on July 3 each year), after which the U.S. Congress could overturn the approval within next 60 days. However, after the China’s political developments in 1989, Congress started considering revoking China’s MFN. Had China lost its MFN status, the tariff imposed on its imports would have risen to a Non-NTR (NNTR) rate—a jump of 30 percentage points on average. Thus, during the 1990s, a window of uncertainty would open each year between the President’s renewal and the Congressional votes. In 1991 and 1992 did such bills pass the House only to be vetoed by the President.  In every year between 1991 and 2000, the uncertainty regarding the trade policy was resolved by September after Congressional votes. In retrospect, China never lost its MFN status during the decade.

The premise of identifying the likelihood of a policy change is that the forward-looking firms consider not only the current price of imports but also the path of future prices by adjusting inventories accordingly (Ruhl 2011). These anticipatory effects are also large in advance of an anticipated tariff decline as in Free Trade Agreements, which makes measuring the trade response when tariffs do change challenging (Khan and Khederlarian 2019). The rationale is that a firm that expects tariffs to increase in the coming month would choose to import more today, when the good is cheaper, and hold the excess in its inventory. The size of this anticipatory purchase provides insight about the firm’s belief about the probability that the tariff increase will materialize.

We use monthly import data to empirically estimate the size of the trade surge that emerges in anticipation of the risk that tariffs would be raised by the size of the NNTR spreads (the gap between NNTR and MFN tariff rates). We implement a standard difference-in-difference approach to overcome seasonalities that are specific to the U.S., China and individual sectors, and we then estimate the response of monthly import growth rates to the NNTR gap. Figure 1 shows how U.S. imports from China surged in anticipation of the possibility of a tariff increase. The blue line shows the treatment effect of Trade Policy Uncertainty (TPU) on U.S. imports from China, and the red line shows the effect on other trade flows that were not affected by the uncertainty (U.S. imports from rest of the world, and the E.U.’s imports from China and the rest of the world). The period of uncertainty was the period after the Presidential renewal and before the Congressional vote (July–September). The anticipatory spike in imports before the voting was followed by a trough in its aftermath reflects a strong uncertainty-induced seasonality, which we use to identify future probabilities. Econometric comparison of imports shows a 4 percent increase in imports during July–September in anticipation of a potential 10 percent increase in tariffs relative to the first six months of that year. 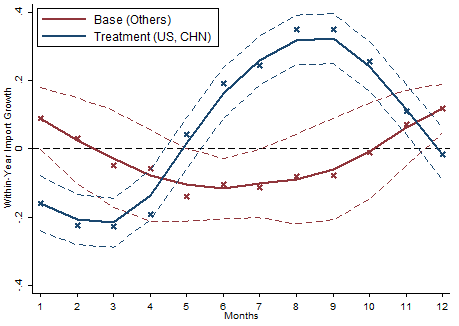 Note: Crosses are the point estimates of the monthly import growth in response to the NNTR risk. The blue crosses show the treatment effect of TPU on U.S.-Chinese trade flows. The red crosses reveal the base effect on the control group—namely that of all other trade flows. The lines are the applied, locally weighted scatterplot smoother. Dashed lines are the 90 percent confidence interval. Standard errors are clustered at HS-6 product level.

We apply a partial equilibrium inventory model of trade in which a continuum of importing firms hold inventories of foreign goods, due to uncertain idiosyncratic demand and to economize on the fixed cost per shipment (Alessandria, Kaboski, and Midrigan 2010a). At the firm level, this results in large, but infrequent imports. Such inventory models are effective in explaining the lumpiness of trade in the data despite non-lumpy final demand of imported goods. This model also has proven useful in explaining the sharp movements in trade flows that took place during and after the Great Recession (Alessandria, Kaboski, and Midrigan 2010b). Summing these trade flows across firms leads to constant imports when there are no industry-specific shocks. Figure 2 plots the dynamics of industry imports in the model in anticipation of a 10 percent increase in tariffs with different probabilities. We see that, as the probability of a given tariff hike increases, so does the anticipatory import surge. Thus, by matching the import rise in the data with a given tariff change, we can calculate the perceived degree of TPU.

We obtained the likelihood of non-renewal of China’s MFN status during the 1990s through simulations of the inventory model. From each simulation we obtain an aggregate import growth rate in response to the tariff risk, generating a model-based counterpart of the observed pattern in Figure 1. We estimate the likelihood of non-renewal to match the anticipatory product-level import surge in the data to the model outcome by changing the probability of the tariff increase. Over the entire period, the estimated probability is approximately 6 percent. Figure 3 reflects the annual probability estimates from this exercise. These probabilities are in line with the political developments at the time; for example, it was high in 1991 and 1992, when the bills passed the U.S. House of Representatives, and again in 1994 when President Clinton vowed to revoke China’s MFN access. After 1997 the probability of non-renewal became small and deviated from the news article count reported by Pierce and Schott (2016). 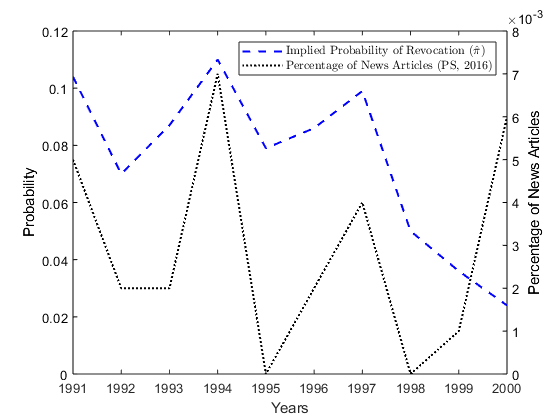 The literature on TPU and trade has found that the NNTR gap is associated with lower trade flows when these are aggregated at the annual frequency. We show that our inventory model accounts for some of the trade-dampening effect of TPU in annual data that complements the explanation by Handley and Limao (2016), which is based on a sunk cost of exporting. The stockpiling that the uncertain path of tariffs triggers increases both the average inventory-sales ratio as well as the inventory carrying costs of firms. Although stockpiling induces rises in imports in anticipation of the uncertainty resolution, overall it results in lower annual imports. Returning to Figure 2, the trade-dampening effect is evident once we recognize that the rise prior to the uncertainty resolution is always smaller than the decline after the uncertainty resolution. Our paper uses the model to show the asymmetry across the periods is increasing with the expected tariff and decreasing in the uncertainty in tariffs. In Figure 3 (above), this shows up with a large drop in trade compared to the rise when the tariff is expected to increase with certainty. In the other cases, there is a smaller gap between the ratio of the fall to the rise, as uncertainty induces firms to wait and see if tariffs will change.

We propose a framework to measure the degree of uncertainty about the path of future trade policy that leverages the unique features of China’s MFN renewal. By considering the anticipatory response of trade, one can identify the likelihood of a trade policy shift. This is important input for the studies that aim to estimate the effect of uncertainty on economic variables [Pierce and Schott (2016), Steinberg (2019)], since for the uncertainty to be effective it is the likelihood as well as the threat that matters. Given the level of inventories, our approach is somewhat limited to measuring probabilities in windows around possible policy changes. This approach provides an alternative to the probabilities others have inferred through stock prices or export and FDI decisions.

The stockpiling we identify in advance of prospective tariff increases is likely to have been an important factor since the election of President Trump and the escalating U.S.-China trade war. In practice our approach of using a model and anticipatory trade flows can also be used to estimate the uncertain timing and size of possible tariff changes, which has been a key feature of the US-China trade war. While we do not consider the general equilibrium impact of this stockpiling, based on the work on inventories and the Great Recession, this may have boosted recent economic activity and will have a dampening effect on growth going forward.

Steinberg, Joseph B. 2019. “Brexit and the Macroeconomic Impact of Trade Policy Uncertainty.” Journal of International Economics 117: 175–195.