The Impact of the China Tire Safeguard

This column evaluates the impact of the China tire safeguard on the US tire industry. Contrary to claims made by the US government, we find that total employment and average wages in the tire industry were unaffected by the safeguard. This result is not surprising as we find that Chinese tires have been completely diverted to other exporting countries due to the strong presence of multinational corporations in the world tire market. On the other hand, US domestic tire prices increased by up to 10% during the safeguard period. The price increase accompanies the same trend in the price changes of imported tires from both China and the rest of the world. In particular, the tariff was fully reflected in the unit value of tires imported from China. Interestingly, the price of imported tires from the rest of the world also rose during the CTS even though their products were not subject to tariffs. 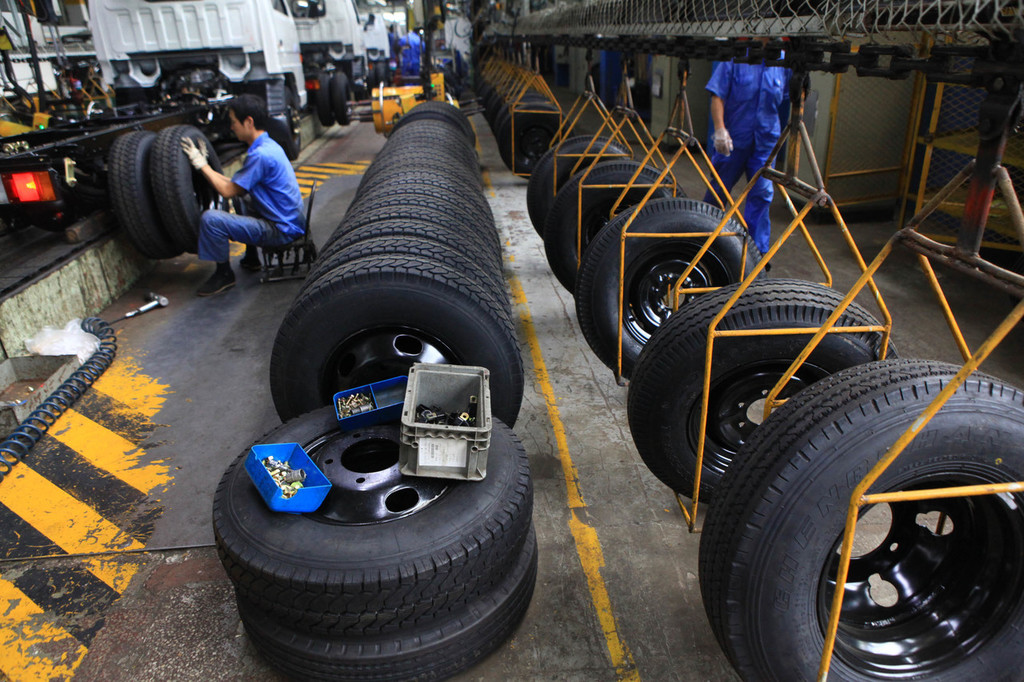 Most current protection policies are enacted in the form of antidumping tariffs, countervailing duties, or safeguards, collectively called temporary trade barriers (TTBs). These policies are typically i contingent, ii temporary, and iii discriminatory in that duties are imposed for a limited time to a small set of products from particular countries. An apparent goal of these policies is to protect domestic industries. However, the impact of a TTB on domestic markets is not clear, in part because the discriminatory feature can divert the importation of subject products from the targeted country to other exporting countries (Prusa 1997).

This column evaluates a special safeguard on Chinese tires (the China Tire Safeguard or CTS, henceforth). The United States added the China-specific safeguard as a condition to China's joining the WTO in 2001; it expired in 2013. In total, seven China-specific safeguards cases were filed, of which two were denied by the US International Trade Commission; five were approved. Of these five approved cases, the US president favored only one— the tire safeguard. Under the CTS, the United States imposed higher tariffs on certain Chinese passenger vehicle and light-truck tires for three years, from the fourth quarter of 2009 to the third quarter of 2012.  Safeguard duties were 35% ad valorem in the first year, 30% in the second, and 25% in the third, on top of the MFN duty rates.

The tire industry has a noteworthy feature: tire production is dominated by a few large multinational corporations (MNCs) in both the United States and around the world. As of 2008, ten firms produced the tariff-subject tires in the United States, and eight of them were MNCs. Production of tires is so concentrated that five major MNCs (Bridgestone, Continental, Cooper, Goodyear, and Michelin) control about 95% of US production and 60% of worldwide production. Moreover, except for Continental, seven MNCs have manufacturing facilities in both China and in other countries. Hence, MNCs can smoothly deviate CTS-affected imports from China to other exporting countries.

The impact on the US labor market

Figure 1 plots time trends of the aggregate import value of the tire products subject to the CTS as well as total employment in the US tire industry from 1998Q1 to 2012Q3. The import of Chinese tires grew dramatically until the implementation of the CTS, except for a slight drop in early 2009 due to the global financial crisis. The punitive tariffs substantially discouraged the rising trend, reducing total imports from China by 62% between 2009Q3 to 2009Q4. After 2009Q4, tire imports from China were relatively flat and were much lower compared to pre-CTS levels. Interestingly, the trend of employment in the US tire industry stands in sharp contrast to the trend of Chinese tire imports. US employment started to fall when the Chinese tire imports started to rise after its admittance to the WTO in 2001. The activation of the CTS seems to not only have stopped further employment declines (with some lags) but also prompted a slight recovery thereafter. As President Obama noted in the State of Union address in 2012, total employment increased by about one thousand workers in the tire industry after the CTS. However, the employment trend around 2009 may have been confounded by an economic recovery from the global financial crisis.


Figure 1: Trends of subject tire imports and employment in the US tire industry 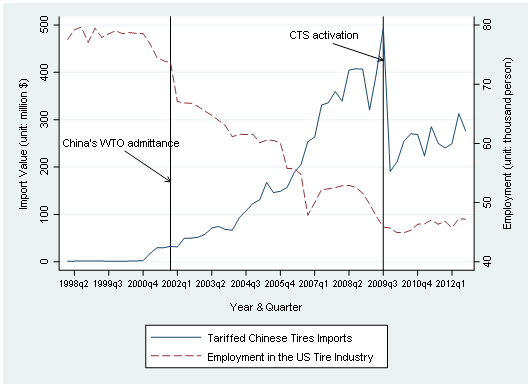 Figure 2: Trends in the US tire industry vs. the synthetic industry 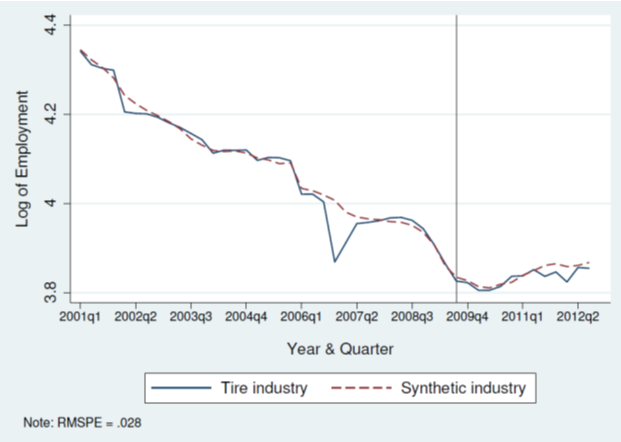 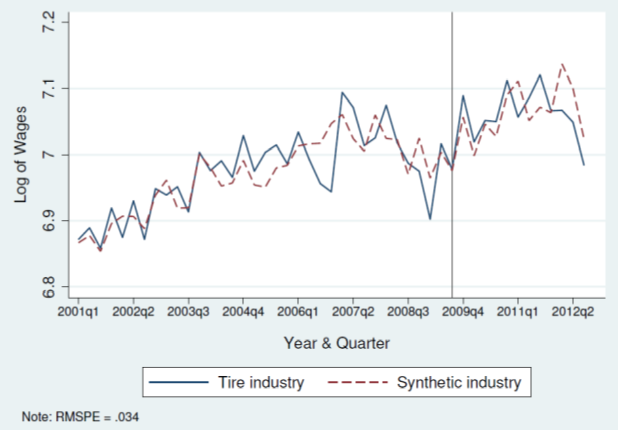 The result is supported by another finding that the substantial drop in Chinese tire imports is completely offset by the increase in imports from other countries. Figure 3 shows that Chinese tire imports have dropped sharply since the CTS, while tire imports from the rest of the world (RoW) have increased significantly. Note that the trend in the total US tire imports barely changed except for the period of the global financial crisis. This complete import diversion leaves little room for domestic producers to adjust their production, which in turn induces no response in the labor market. Thus, our study highlights that the discriminatory feature of the CTS plays a crucial role in the negligible labor market effect. 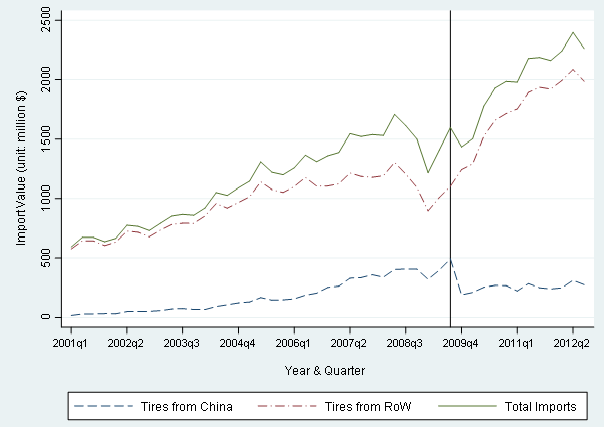 Countries with the fastest growth rates in tire exports to the United States during the CTS period have the world’s major tire MNCs manufacturing facilities. For example, Japanese business magazine Nikkei reports that Thailand has become a key export base for tire MNCs since the implementation of the CTS. Bridgestone in Indonesia has expanded its production capacity to meet increased demand from the United States. Two tire MNCs headquartered in South Korea have shifted large shares of their production from China to South Korea and other countries to circumvent the CTS measures. Asia Times (2011, September 10th) reports that Bridgestone Taiwan, which in the past did not export tires to the United States, began to export one million tires to the United States in 2009 in response to the tariff imposed on China. Furthermore, Cooper, headquartered in Ohio, did not start sourcing tires from its US plants to replace the Chinese imports. Instead, the company switched to its partners in Taiwan and South Korea to supply the US market.

Taken together, this evidence supports that the discriminatory tariff induced MNCs to switch production from China to other countries.

While the CTS did not have any impact on the US labor market, it did raise the US tire producer price index (PPI) during the safeguard period (Chung and Lee 2019). The price increase was consistent with the same trend in the price changes of imported tires from both China and the rest of the world. In particular, the tariff was fully reflected in the unit value of imported tires from China. Tire exporters from China have not absorbed the tariff in their original export price. Interestingly, the price of imported tires from the rest of the world rose during the CTS even though their products were not subject to tariffs.

Figure 4 shows the estimation results using the Synthetic Control Method. The Figures 3(a) through (c) show that the synthetic industries mimic the price trend in the domestic tire industry quite well in the pre-treatment period. Moreover, all three figures exhibit very similar time trends in that the PPI of the US tire industry and the unit values of imported tires from both China and the rest of the world diverge from the synthetic industries during the CTS period, with the highest gaps in the third year (2011Q4–2012Q3); they then converge after the tariff is removed.

Based on our estimates, the domestic US tire price (PPI) increased by as much as 9.9% compared to the synthetic industry. Also, the unit value of imported tires from China increased by up to 34.9%, which is just about the same as the maximum safeguard rate. This implies that overall, the tariff was fully passed through to consumers. The full pass-through is not surprising given that the tariff existed for a short period,  so the exporters from China did not adjust their prices (Amiti et al. 2019). The unit value of imported tires from the rest of the world increased by up to 20.1%, indicating that exporters in the rest of the world substantially reflected the discriminatory tariff against China onto their prices.

Figure 4: Trends in the US tire vs. the synthetic industry 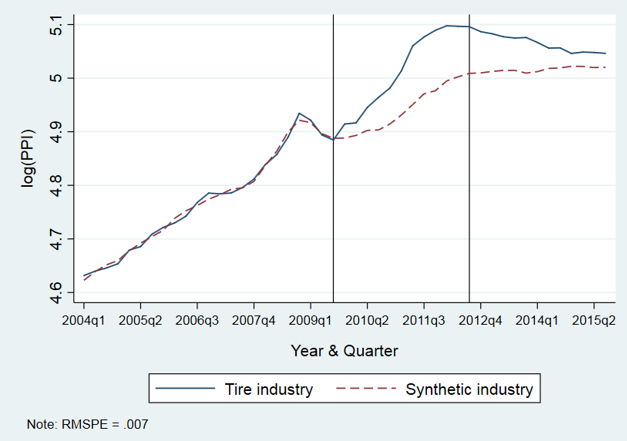 (b) Unit value of imports (including tariff) from China 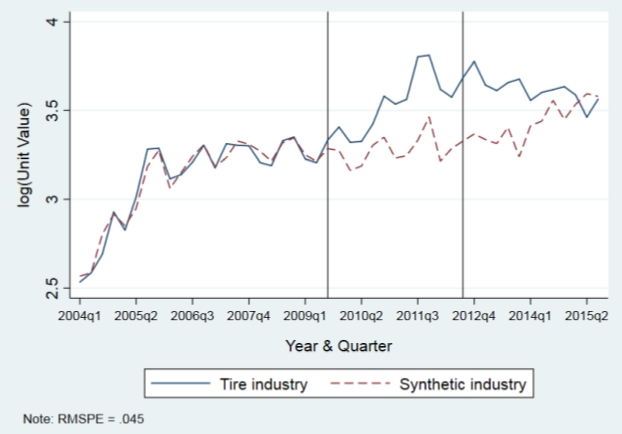 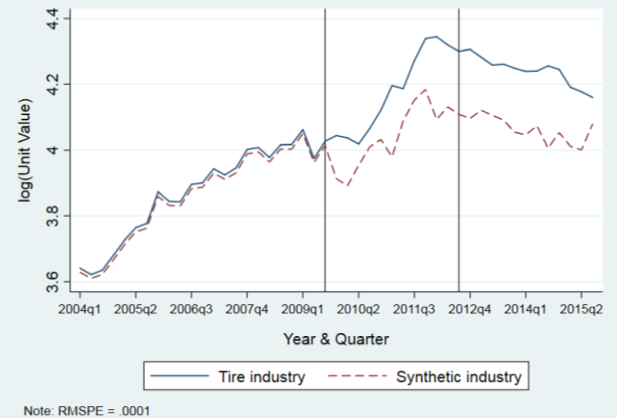 Combining the findings of Chung et al. (2016) and Chung and Lee (2019), these empirical results imply that the CTS provided an environment in which  US tire producers  made higher profits at the expense of their consumers. However, the higher profits did not generate additional employment or higher wages, and furthermore, the profits did not last long. Our study delivers a simple message: the China tire safeguard was a bad policy.

Can our message be generalized to other protectionist trade policies? It depends, but in our view, any discriminatory TTB charged on industries dominated by a few MNCs would be expected to generate a similar finding. Further research is warranted to draw more general implications for policy designs.